December 11 2017
49
The press service of the state concern Ukroboronprom informs that the A. A. Morozov Kharkiv Machine Building Design Bureau has completed factory tests of the new BTR-4MB1 combat vehicle.


In "Ukroboronprom" indicate that when creating a new modification of the BTR-4 used military experience gained in the ATO. In addition, the BTR-4MB1 used a modular reservation system that meets the latest NATO standards. 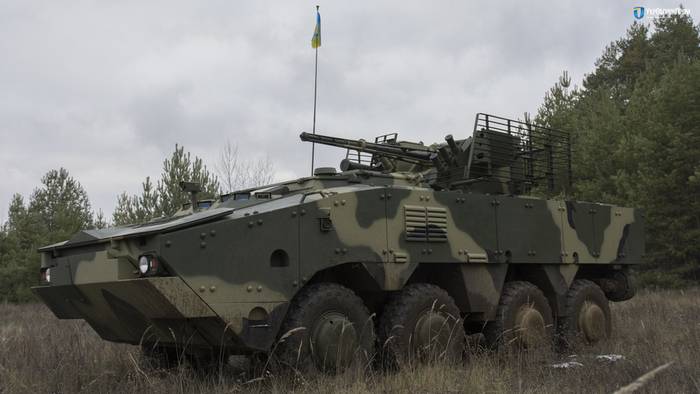 The heavy duty military vehicle has been modernized by specialists from the State Concern Ukroboronprom in accordance with the latest trends of NATO armored vehicles. During the fire tests, the BTR-4MB1 confirmed the ability to destroy the enemy at the maximum range weapons, at night and in difficult weather conditions
- Poroshenko wrote on Facebook

According to the developers, in terms of the booking level, the BTR-4MB1 significantly exceeds any sample of an BTR or BMP that is in service with the Ukrainian army. In addition, the new modification of the combat vehicle is built on the modular principle, which allows you to install additional fuel tanks, floats or mounted armor, changing the capabilities of the BTR-4МВ1 in a short time.

The BTR-4MB1 is armed with the BM-7 Sail combat module, which includes the 30-mm automatic cannon, the 30-mm automatic grenade launcher, the 7,62-mm machine gun, as well as the high-precision anti-tank complex Barrier. At the same time, the MV1 modification received a new optical-electronic sight with a powerful thermal imager, which is connected to a high-precision digital firing system.

Ctrl Enter
Noticed a mistake Highlight text and press. Ctrl + Enter
We are
The Czech army prefers the Puma BMP and is looking for a replacement for the T-72 tank.
49 comments
Information
Dear reader, to leave comments on the publication, you must to register.