The new UAV was developed by Northrop Grumman in partnership with universities in the states of North and South Carolina with the support of the Naval Research Administration (ONR) under the US Navy. Dash X is a multi-purpose air launch drone. 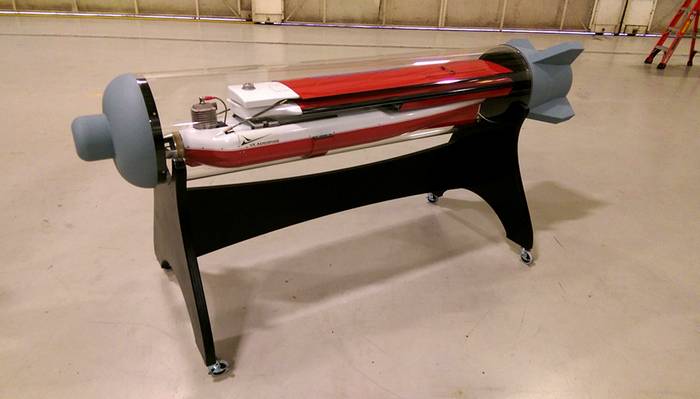 To launch Dash X from the aircraft, it is planned to use special containers. After dumping, the UAV drops out of the capsule, spreads its wings and activates the engine, accelerating it to 110 km / h. The wing span of the disposable "scout" is 3,65 m, and the flight duration due to low speed can reach 10 hours. According to the developers, Dash X can carry almost any type of payload, while the US Navy plans to use a drone for electronic intelligence.

Northrop Grumman points out that they have already assembled two fully functional Dash X prototypes that the US Navy command successfully tested. During the test flight, the drones detected and corrected targets in real time, and also worked out target designation.

The US Navy plans to use new drones to search for disguised armored vehicles and rocket launchers. Northrop Grumman has stated that it plans to complete work on Dash X already in 2019, after which the “scout” can be used with F / A-18 Super Hornet and EA-18G Growler fighters, reports "Warspot"
Ctrl Enter
Noticed oshЫbku Highlight text and press. Ctrl + Enter
We are
Unmanned aircraft complex "Orion"Pulse Race: high-energy weapons ready to go to sea
17 comments
Information
Dear reader, to leave comments on the publication, you must to register.