December 11 2017
22
RF Armed Forces of the Russian Federation ensure the advance of the Syrian army to Abu Dali, three civilians of Raqqah were killed in the explosion of the mines left by the terrorists. Reports about it FAN with reference to Syrian sources. 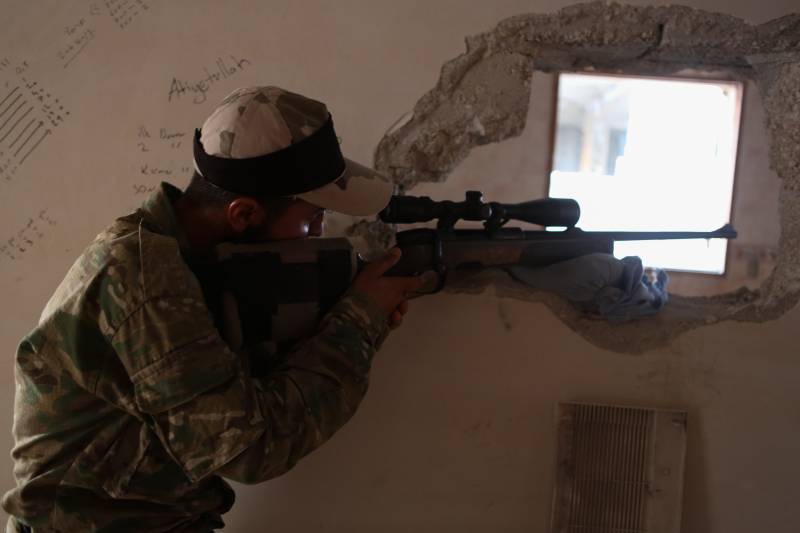 During the day, skirmishes between Islamist groups and the Syrian Arab Army (CAA) were observed on the territory of the Eastern Guta oasis. The Syrian army has advanced significantly in the attack on the city of Mugr al-Mir (Damascus province). Government soldiers occupied key heights in the area, thereby establishing fire control over the settlement.

The Russian Aerospace Forces, together with the Syrian Air Force, continued to strike at the Jebhat al-Nusra terrorist deployment zones (the group is prohibited in the Russian Federation) in the southern part of Aleppo province. Russian aviation bombed the positions of radical Islamists in the Al-Khos mountain region. Attack from the Russian and Syrian pilots were strongholds of fighters in the vicinity of the settlements of Marba Salum, Al-Muketab, Al-Burj Sabaan. As a result of one of the sorties in the vicinity of the village of Tel Daman, the artisanal oil refining workshop owned by the terrorists was destroyed.

In the north of the province of Homs, there were battles between government forces and militants of the radical opposition. Clashes were noted in the area of ​​Ain Hussein. In the evening, it became known that the location of the Syrian Arab Army (CAA) in the area of ​​Al-Zahr came under fire by a sniper, killing several soldiers.

Separate groups of the IG group (banned in the Russian Federation), remaining in the province of Deir-ez-Zor, make attempts to counterattack the positions of the Syrian army. Clashes were noted in the area of ​​the station T2 near the village of Al-Muazil. The servicemen repelled the attack of bandits.

In the south of the province of Idlib, the operation of the CAA continued during the day with the support of the Russian Aerospace Forces against the radical coalition led by Al-Nusroy. Russian aviation launched a series of strikes against the fortifications of terrorists in the vicinity of the strategic settlement of Abu Dali. The Syrian army attacked the position of terrorists near the village of Umm Hazim. At the end of the day, it became known that government forces drove out militants from the settlement of Al-Khawaya, located to the west of the previously liberated Zafariya settlement.

In the administrative center of the province of Rakka, two more cases of detonation of improvised explosive devices were discovered in the city by terrorists during the retreat. Three civilians were killed.

The Syrian Arab Army (CAA), with the support of the Russian Aerospace Forces, continued to advance in the east of Hama province, freeing settlements along the way from Al-Nusra’s terrorists. At the same time, under the cover of Russian aviation, the army of Bashar al-Assad dislodged militants from the settlements of Balil, Umm Hazim and Tel Hazim in the north of the province.