Minesweeper Kormoran: the most modern ship of the Polish fleet

December 12 2017
15
On November 28, 2017, a solemn ceremony was held in Gdansk for the introduction of a new warship into the Polish Navy, which was Kormoran minesweeper-seeker (tail number "601") of project 258 (Kormoran II code). In a ceremony dedicated to the 99th anniversary of the Polish fleet, attended by senior officials, including the Minister of Defense of the country Anthony Macherevich. The new minesweeper became part of the 13th minesweeper division of the 8th Polish Navy Coast Defense Flotilla. This is the first Polish-made ship in the last 20 years to be adopted by the Polish Navy.


Polish shipyards did not transfer a single ship to the country's Navy from the middle of the 1990's, when the fleet was replenished with three small rocket boats built according to the German 660 project (Orkan class). The new minesweeper was fully designed and built in Poland as part of the Kormoran II program. The ship was built on the Polish shipyard Remontowa Shipbuilding in the city of Gdansk. Until 2011, this company (today belongs to the Grupa Remontowa group) was called Stocznia Północna. At one time it was known for the construction of medium and large landing ships and auxiliary vessels for the Soviet Navy. 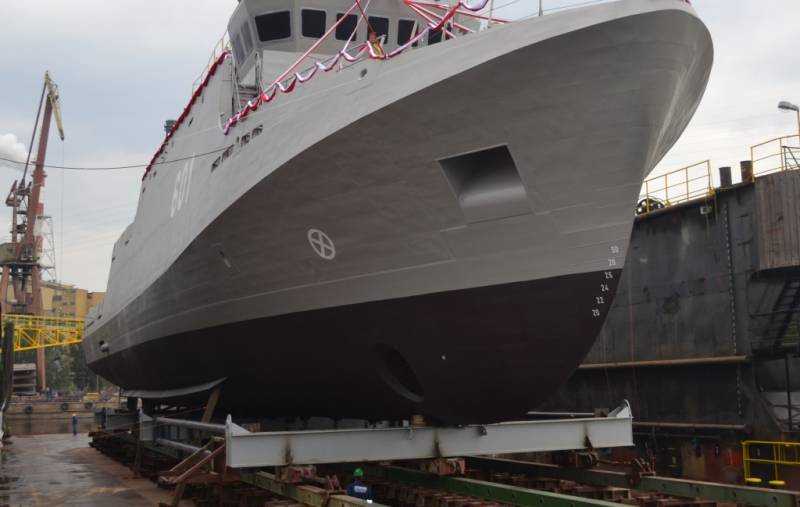 Minesweeper Kormoran, photo: defense24.pl
Minesweeper Kormoran (from Polish translated as "cormorant") can be safely attributed to the military protracted. The 258 project appeared as part of a program to create a minesweeper of a new generation, which was launched back in the 1980s. The first version of the project (257 project, Kormoran cipher) was completed in 1999, however, the construction of the ship was canceled for technical and financial reasons in 2002. The development of the new Polish minesweeper was modeled on the German base minesweeper "Hameln" type "Kulmbach". Their development began in Germany in the middle of the 1980-ies, the first 10 base minesweepers of the Hamelin type were transferred to the fleet in 1989-1991. In 2000-2001, 5 was converted from them into minesweepers looking for mines of the Kulmbach type of the 333 project. These ships have a noticeable external similarity with the new Polish minesweeper "Cormorant".

In 2007, the Polish minesweeper program was reanimated. The Poles finally returned to the idea of ​​creating a national minesweeper in 2011, the updated program received the Kormoran II cipher. The warship was designed jointly by the Centrum Techniki Morskiej (CTM) design bureau and the Remontowa Shipbuilding shipyard. A consortium of these two Polish enterprises received in the 2013 year a contract from the Polish Ministry of Defense for the construction of the head minesweeper (with an option to build two more ships of this type) worth 1,2 billion zlotys (approximately 320 million dollars). 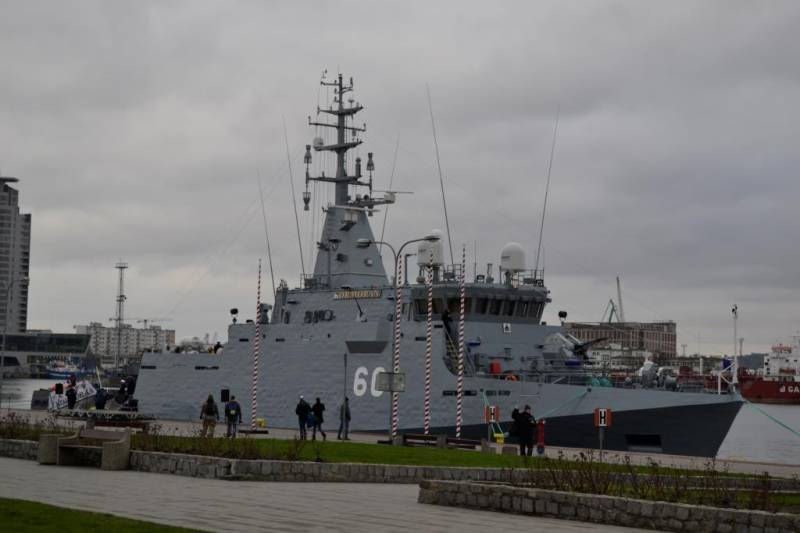 Minesweeper Kormoran, photo: defense24.pl
The lead ship of the Kormoran series (Cormorant) was laid at the Remontowa Shipbuilding shipyard in Gdansk in April 2014. Was launched - 4 April 2015 of the year. 13 July 2016, the ship went to sea to conduct factory sea trials. Under the terms of the contract, the ship was to be handed over to the 30 fleet of November 2016 of the year, but because of the lengthy process of testing and carrying out improvements, the minesweeper was handed over to the fleet with a delay of exactly one year. The minesweeper-seeker of mines Kormoran is intended for search and neutralization of mines, reconnaissance of sea routes, carrying out underwater blasting operations, conducting ships in the water area representing the danger of mines. Designed for use in the exclusive economic zone of Poland and for performing tasks as part of operational connections and independently in the Baltic and North Seas. On the assurances of the Polish side, the ship corresponds to the ice class L3, which provides it with navigation in light ice conditions with the help of icebreakers (when necessary) and independent navigation in small ice in coastal areas of non-Arctic seas.

The construction of two other minesweepers (provided with an option) Albatros (Albatross, tail number “602”) and Mewa (Seagull, tail number “603”), had to start in 2019 and 2022, respectively. However, so far construction has been postponed until the test results of the head minesweeper "Cormorant" are obtained. It is planned that, as part of the Polish Navy, three new minesweepers searching for mines of the 258 Kormoran project will replace four obsolete minesweepers of the 206FM project, built back in the 60s of the last century. 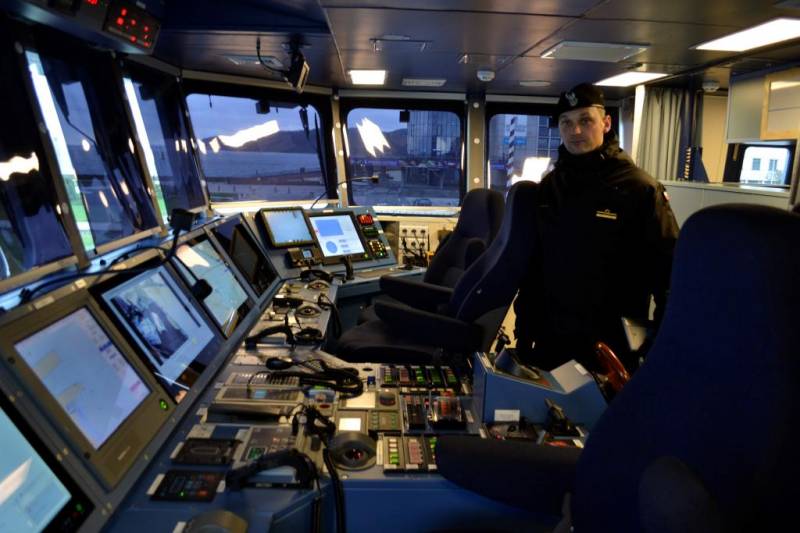 On the bridge of the minesweeper Kormoran, photo: defense24.pl
The new Polish minesweeper Kormoran has a hull made of stainless non-magnetic steel. The ship’s total displacement is 830 tons (hereafter according to the defense 24.pl resource), the ship’s length is 58,5 meters, the width is 10,3 meters, and the draft is 2,7 meters. Full crew - 45 people, including 7 officers. Also on board there are places for additional 5 people to be accommodated: two pairs of diving-minelayers and the commander of the group leading and coordinating the dive.

The ship’s power plant consists of two MTU 8V 396 TE74L diesel engines with 1000 kW each (1360 hp), which are paired with a two-speed ZF S360NNR DAP / PTI transmission. The minesweeper is also equipped with two Schneider Voith Schneider Turbo 21 GH / 160 thrusters and a Schottel STT 170 AMAG thruster with a 135 horsepower. The ship has very good maneuverability, can rotate almost in place and take a fixed permanent position at sea, thanks to the presence of a dynamic positioning system. The total speed of the minesweeper is 15 nodes, the cruising range is 2500 miles, 10 autonomy for 24 days. These parameters can be increased by replenishing stocks of fuel, water, food at sea (both from other ships and from helicopters). 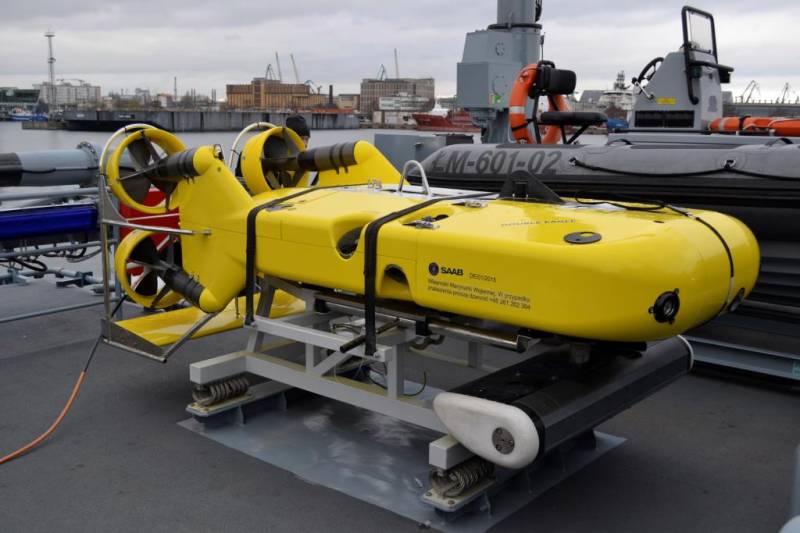 Anti-mine underwater vehicle Saab Double Eagle Mk III, photo: defense24.pl
The Kormoran minesweeper armament is represented by the SCOT-M developed anti-mine action system developed by the STM center, the SHL-101 / T underground mining HAS mine detection system, as well as the Orka self-propelled HAS variable depth fire. The ship’s anti-mine armament is complemented by remotely operated underwater vehicles — Saab Double Eagle Mk III anti-mine vehicles and Kongsberg Maritime Hugin 1000MR underwater object search and seabed mapping devices (vehicles of both types were ordered in 2014). Also on board are the modular underwater mine-fighting devices Morswin, created jointly by STM and the Gdansk University of Technology, as well as disposable mini-mine destroyers called Gluptak. On board there is the necessary diving equipment, including a decompression chamber, designed for 6 people. To help the mineral divers from the left side there is an inflatable rubber boat, which is lowered into the water with the help of its own crane girder.

It is possible to board sea-based helicopters on board the ship. 13 December 2016 was tested when the Kaman SH-2G Seasprite anti-submarine helicopter landed on the Kormoran minesweeper. Later, the Polish military reported on the success of the tests. Helicopter SH-2G Seasprite has a crew of three - two pilots and a navigator-operator. This helicopter can be used to detect surface targets, combat enemy submarines, and conduct search and rescue operations. Its main equipment is a search radar, GAS (hydroacoustic system) and a magnetic anomaly detector for detecting submarines. 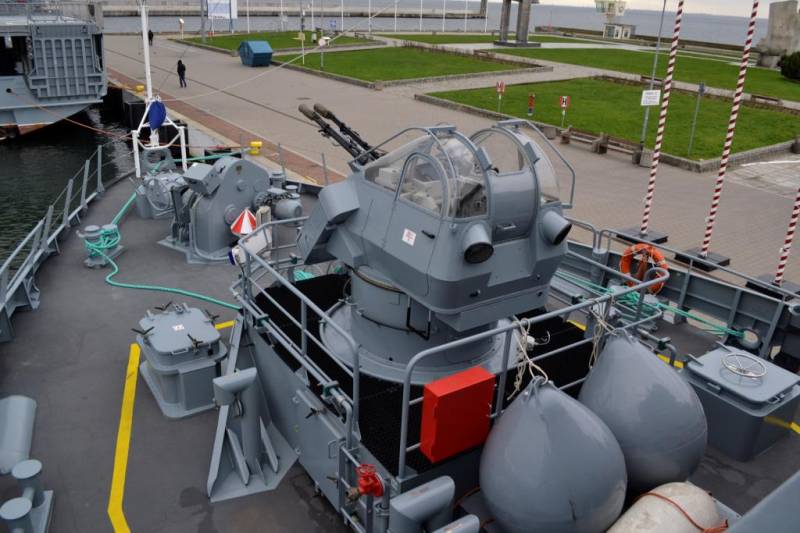 23-mm gun mount ZU-23-2MR Wrobel II, photo: defense24.pl
The armament of the ship is represented by the 23-mm coaxial anti-aircraft gun ZU-23-2MR Wrobel II (created on the basis of the Soviet ZU-23), three large-caliber 12,7-mm ZMT machine guns WKM-Bm, and also 4 PZRK Grom. In the future, the Poles intend to replace the ZU-23-2MR with the new Polish 35-mm single-barrel Triton shipborne automatic artillery, the ship tests of which began in Poland in 2016.