December 11 2017
8
Last week, in the offices of the Kiev authorities, there was an active struggle for the right of officials and people's deputies to use their current situation for personal enrichment, that is, for the right to unlimited corruption. This infection has long poisoned the Ukrainian elite. After Maidan, corruption only intensified, which caused the extreme concern of Western curators of Ukraine. At their request, the National Anti-Corruption Bureau (NABU) and the Special Anti-Corruption Prosecutor's Office (SAP) were created in Kiev. The new structures of the West immediately took control. 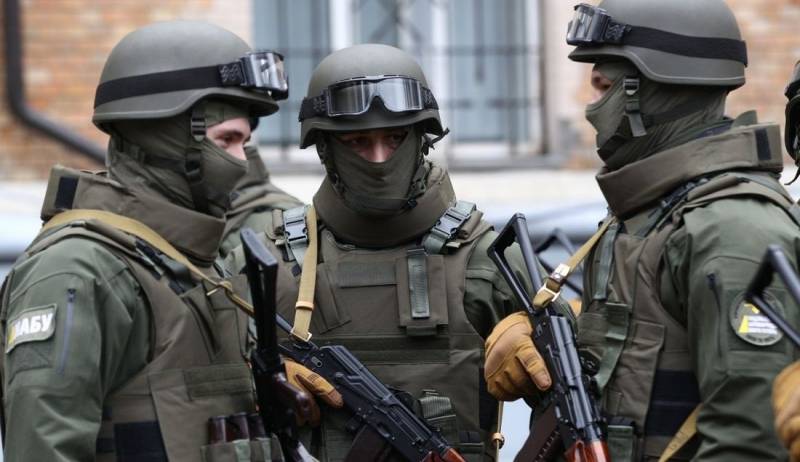 External initiators of the fight against Ukrainian corruption wanted to get at their disposal also an anti-corruption court. But this idea immediately drowned in the Kiev offices. Their masters, frankly and without any embarrassment, showed the West that corruption is the main driver of post-Maid authority. Without it, this power will simply fall down like a kite without wind.

It should be noted here that the creation of NABU and SAP (as opposed to a special anti-corruption court) was subject to certain conditions. Kiev’s obligation to form both of these structures was spelled out both in the European agreement on the granting of a visa-free regime to Ukrainians and in the documents of international financial institutions that provide Ukraine with foreign currency loans.

A structure similar to NABU has long existed in the United States. Therefore, the Ukrainian anti-corruption bureau was created on the transatlantic model. Moreover, the Americans took control of the activities of this bureau and the placement of personnel in it. They even planned to appoint a foreigner as the head of the NABU.

Then they chose the Ukrainian lawyer Artyom Sytnik, who has experience in the prosecutor's office and investigation. But the first deputy he took the Georgian Guizot Uglavu. This happened in the spring of 2015, and already at the end of the summer, the Prosecutor General’s Office of Ukraine began a pretrial investigation against Sytnik in connection with the article “abuse of power or official position”.

The reason for the prosecution of the head of the NABU was the inclusion by Sytnik of "unauthorized persons in the delegation for a trip to London." In other words, a new fighter against corruption for state money brought people close to him to Britain. The violation for Ukraine is not so hot, but the authorities have immediately put up with Sytnik, so that he understands who is in charge of the Kiev house.

At that time, NABU presented only a potential threat to the authorities and corrupt officials. It dealt exclusively with internal problems. Conducted competitions for vacancies, created its own material base, developed departmental regulatory documents, etc.

So the first strike of the Ukrainian Prosecutor General’s Office on Artyom Sytnik was preventive and in many respects preventive, since Sytnik was engaged exclusively for the formation of a new special service for more than a year. However, the subsequent corruption cases of the NABU did not particularly disturb their defendants.

The practice of competitive recruitment for filling vacancies played a trick on the bureau leaders. The operatives and investigators recruited through the competition, as a rule, did not have sufficient practical experience and professional skills. Therefore, experienced lawyers developed their cases on the way to the Special Anti-Corruption Prosecutor's Office.

Not even overseas curators helped. For the most part, they only extinguished the friction of the new special service with the Ukrainian authorities of all levels. This worked as long as NABU was engaged in petty officials suspected of corruption. But in society, and in the interested Western elites, there was a request to expose Ukrainian officials of the highest rank. And the bureau responded to this.

Ukrainian security officials began a war between themselves

Together with the special prosecutor's office, the NABU initiated cases against the Prosecutor General of Ukraine Yuriy Lutsenko. He was suspected of tax evasion, illegal enrichment and even receiving a bribe of $ 150 thousand. Lutsenko already has prison experience (under President Yanukovych “for wasting public funds on a particularly large scale,” he spent more than two years in prison) and therefore became pretty nervous.

The Prosecutor General, in turn, accused NABU of organizing illegal interception of high-ranking officials and the protection of the Ukrainian president. Then - in the illegal activities on the territory of Ukraine of the American FBI, with which NABU signed a memorandum that the Americans in the coming years will help the Ukrainian partners "in conducting investigations of international money laundering, bribery and corruption."

The crown of the confrontation with NABU was a joint operation of the Prosecutor General’s Office of Ukraine and the Security Service to detain employees of the National Anti-Corruption Bureau of the “undercover” division of detectives suspected of provoking bribery.

The scandal broke serious. If you omit its details, an open war between the power structures of Ukraine, which has received loud public publicity, will appear in the dry residue. The Americans responded to this immediately. They invited the Ukrainian security officials to Washington "for debriefing." Good and cause I found worthy. A meeting of the so-called Global Asset Recovery Forum arrived.

The forum, chaired by US Attorney General Jeff Sessions, was to discuss asset recovery to Nigeria, Ukraine, Tunisia and Sri Lanka. Lutsenko did not fly to Washington. In the company with the leaders of NABU and SAP, he sent his deputy, and not the first. So Ukraine was forced to officially represent the Ukrainian ambassador to the US Valery Chaly on the forum.

Reconciliation Ukrainian security officials did not work. Their opposition, on the contrary, increased. New firewood in the furnace of contention threw at a closed meeting of the Verkhovna Rada Prosecutor General Yury Lutsenko. What he was saying there was not told to society, but they showed the consequences. People's Deputies dismissed the head of the anti-corruption committee of the Verkhovna Rada Yegor Sobolev, who is responsible for contacts with NABU and SAP.

This step of deputies caused a sharp reaction in the West. Advisor to former US Vice President Joe Biden, Michael Carpenter called it a “disgrace” and promised to “recommend (the US administration - ed.) To reduce all US government assistance to Ukraine, including security support.”

Pressure on the anti-corruption structures of Ukraine was condemned by the Managing Director of the International Monetary Fund, Christine Lagarde, and World Bank President, Jim Young Kim. According to the testimony of Alexander Sushko, scientific director of the Institute for Euro-Atlantic Cooperation, “on the night of December 7, Ukrainian politicians had to listen to a lot of complaints from Western partners, including threats to suspend the visa-free regime with the European Union.”

They wanted to adopt the new law immediately after the speech in the Rada Prosecutor General Lutsenko, but so far they have postponed. Most likely to wait out the West on Ukraine because of the pressure of its authorities on anti-corruption structures. In Kiev today demonstrate a certain "understanding of the problem."

Experts rated these philippics as regular political maneuvers in order to preserve the existing status quo and prevent the independence of Ukrainian anti-corruption structures. According to the already mentioned here by Alexander Sushko, "among politicians, there was a marginal degree of irritation by the very fact of the existence of independent anti-corruption bodies."

Meanwhile, the effectiveness of the NABU is still extremely doubtful. It is appropriate to recall the arrest of the son of the Minister of Internal Affairs of Ukraine. This is how Francis Maliž, director of the European Bank for Reconstruction and Development in Eastern Europe and the Caucasus, figuratively assessed such actions. He compared them with sport fishing: “First you catch fish, take pictures with it, and then let go.”

Sushko does not expect complete cessation of pressure on anti-corruptionists. I agree with the chairman of the board of Transparency International Ukraine Andrey Marusov. However, he believes that as a result of constant balancing, when one unpleasant decision for the West is made, and the second is postponed, “Western partners may finally get tired of Ukraine.”

In the meantime ... The West once again confined to threatening rhetoric. There were no practical solutions. Ukrainian officials and deputies defended their right to independence from anti-corruption structures.

Ctrl Enter
Noticed oshЫbku Highlight text and press. Ctrl + Enter
We are
Situational analysis of the death of the MH17 flight (Malaysian Boeing 777), made on the basis of engineering analysis from 15.08.2014Results of the week. "Well, do not change me because of every idiot!"
Military Reviewin Yandex News
Military Reviewin Google News
8 comments
Information
Dear reader, to leave comments on the publication, you must to register.