December 11 2017
4
In November 2017, information was finally confirmed on several defense contracts important to Russia. In particular, the delivery of Iskander-E missile systems to Algeria, which became the second foreign customer of this operational-tactical missile complex, was officially recognized as Armenia. There was also information about the start of deliveries of the main combat tank T-90S to Vietnam, the contract is under implementation.

As reported by the agency "Interfax», The Russian Federation has begun supplying the T-90S and T-90SK tanks (the commander's version, distinguished by the presence of additional communications and navigation equipment) under a contract previously concluded with Vietnam. Mikhail Petukhov, Deputy Director of the FSMTC of Russia, who was the head of the official Russian delegation at the Defense & Security exhibition, told the agency's journalists about this. According to him, the parties have started to implement the previously concluded contract.

Previously, information about this contract was confirmed only in the public annual report of Uralvagonzavod, which contained information that in 2017 the implementation of a contract with a foreign customer 704 (Vietnam) for the supply of 64 T-90С / СК tanks should begin. Mikhail Petukhov also said that the Russian side is discussing with Vietnam the possibility of supplying anti-aircraft missile systems. “We have a dialogue with Vietnam on the supply, modernization and repair of anti-aircraft missile systems and systems of various types,” said Petukhov, answering the question of whether the Vietnamese side has an interest in purchasing modern C-400 Russian air defense systems. It is worth noting that the C-400 anti-aircraft missile system is a sought-after product on the international arms market, many states are showing interest in acquiring it. Without answering specifically about the possibility of supplying the C-400 complex, Mikhail Petukhov stressed that at the present time both countries are working on defining a range of weapons for which further cooperation will be carried out. 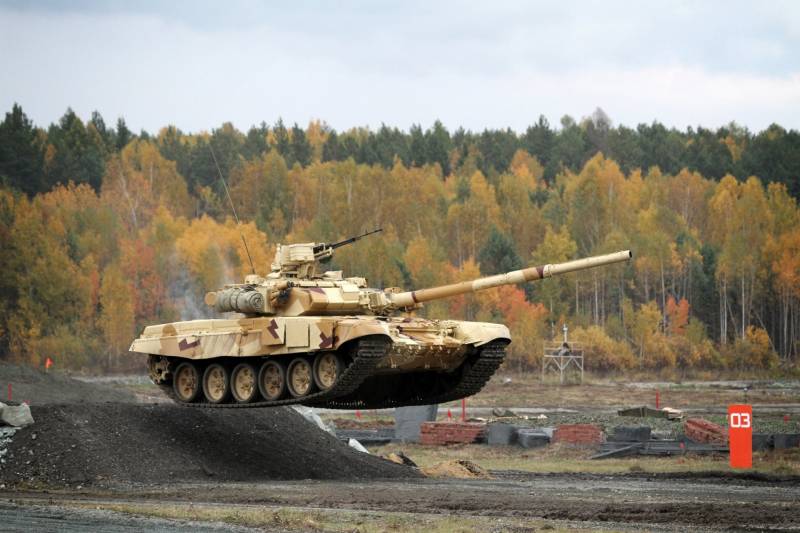 It should be noted that Vietnam is traditionally one of Russia's key partners in the field of military-technical cooperation. In the five years from 2011 to 2015, including Vietnam, Russia acquired 3,7 billion dollars worth of Russian weapons, ranking third in the structure of Russian arms exports by this indicator. In July, 2017, at the MAKS air show, Alexander Mikheev, the head of Rosoboronexport, said that Russia would supply Vietnam with marine equipment and tanks. Earlier, he noted that a significant amount of Russian supplies in the field of military-technical cooperation are carried out to Vietnam. Thanks to Russia, this country has created a modern submarine fleet with all the necessary infrastructure.

The delivery of Iskander-E OTRK to Algeria has been officially confirmed.

Russia supplied the Iskander-E operational tactical missile system to one of the countries from the Middle East and North Africa region, the agency said in mid-November RIA News. Information confirmed at the Dubai Airshow 2017. The transaction was confirmed by the official representative of the Federal Service for Military-Technical Cooperation (FSMTC) of Russia. Until recently, the only country in service with this modern Russian missile system (according to confirmed data) was Armenia.

It is worth noting that it is practically with 100-percent probability that it is Algeria. In September 2017, an Algerian user Hammer Head, on its Facebook page, noted that Algeria had acquired Iskander-E 4 tactical missile systems from Russia, becoming the second foreign recipient of this system after Armenia. According to publications in the Algerian press, the contract with Russia for the supply of Iskander-E OTRK was concluded in 2013 year. 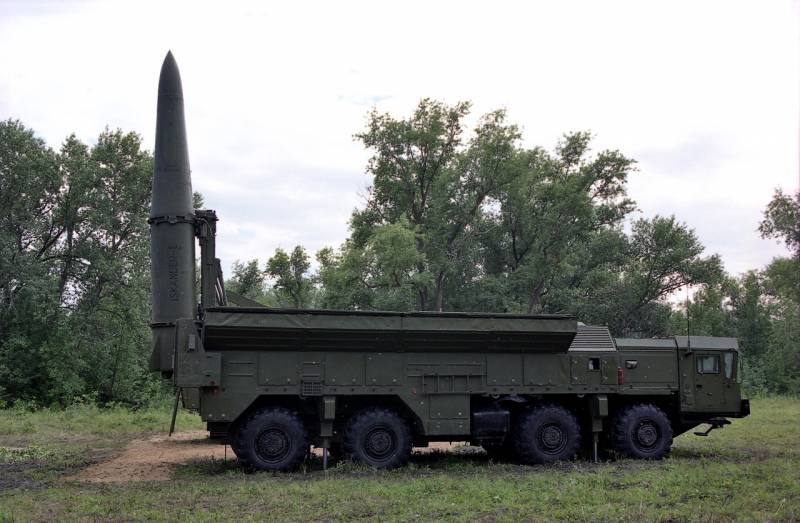 "OTRK" Iskander-E "is a modern type of high-precision weapons, which receives enough requests from foreign partners of Russia. In 2017, we put the complex in one of the countries of the region, ”commented the representative of the Federal Service for Military-Technical Cooperation of Russia, whether the contract was actually signed with one of the countries of the Middle East and North Africa for the acquisition of this complex.

The “Iskander-E” OTRK is intended for delivering high-precision strikes with powerful rocket weapons at various targets (both small and square), located in the operational and tactical depth of enemy forces building. The complex can be used in any theaters of war, in any conditions, including with the active opposition of the enemy with the help of electronic warfare and missile defense.

Morocco is negotiating the purchase of C-400

According to the bmpd blog, citing Hamza Hubhoub’s material “Morocco is expanding military cooperation with Russia” posted on the Moroccan resource alyaoum24.com (translated from the website inosmi.ru), the new buyer of C-400 air defense systems could be Morocco. The article says that one of the signs of strategic changes in the North African region is the desire of the Moroccan military to buy the C-400 Triumph air defense system in Russia in order to diversify its own military assets. The country monitors regional and international events and wants to be ready for them. 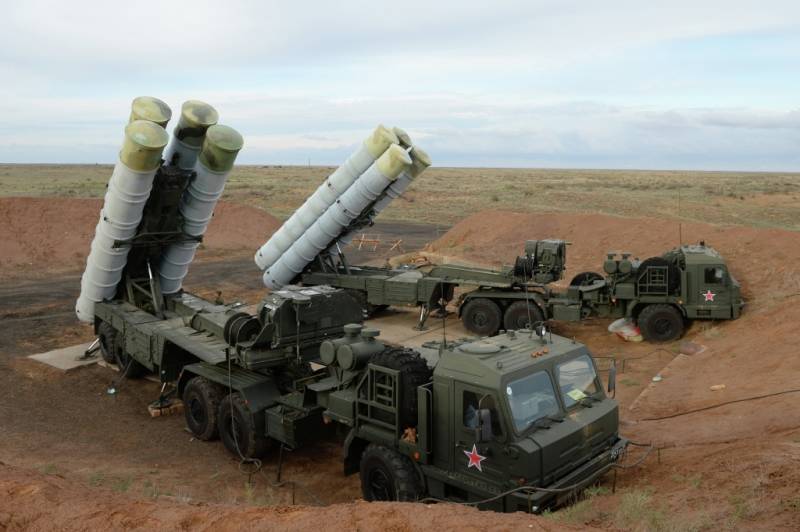 The article says that negotiations between the countries on the purchase of anti-missile batteries and airplanes crowned an agreement with Rosoboronexport. The agreement was reached in the framework of the official visit of the Prime Minister of Russia Dmitry Medvedev to Morocco on October 11 2017. Following the visit of the Prime Minister, 11 agreements were signed, which concerned not only the strengthening of military cooperation between the countries, but also agriculture, energy, education and tourism. In turn, one of the Moroccan military officials said that the country participates in projects in the field of the military industry together with a group of states, including India, China and Brazil. They are all interested in the production of air defense systems, including missile systems and long-range anti-aircraft missiles, through the acquisition of licenses for military production.

Military expert Abdel Rahman Maccavi noted that, most likely, the air defense systems acquired by Morocco will be Russian-made. This deal will be aimed at achieving a military balance in North Africa between Algeria and Morocco. The expert believes that such a shift can also have political aspects. He believes that Moscow has not forgotten the treachery of Algeria, which doubled gas production and its exports to Europe, after the introduction of European sanctions against Russia and what the late Ahmed Osman said: “Algeria’s heart is in Russia, but its money is in Europe” . In an interview, Abdel Rahman Makkavi noted that the possible rapprochement between Russia and Morocco could be based on a number of common interests, including those relating to the military situation in the North African region. According to him, the course of possible wars in North Africa will depend on long-range missiles, air defense weapons and UAVs.

Told 7 on November 2017 to journalists TASS Deputy Director of the Federal Service for Military-Technical Cooperation (FSMTC) Mikhail Petukhov, Russia and Thailand in September this year signed a contract for the supply of two more Mi-17V-5 helicopters. Petukhov said this at the Defense & Security 2017 exhibition. The helicopters are purchased in the interests of the Royal Thai Land Forces, that is, they will be used by the army aviation. According to Petukhov, in the future we can count on the order of the next batch of helicopters. He also reminded reporters that an intergovernmental agreement on military-technical cooperation was also signed between the countries in September. 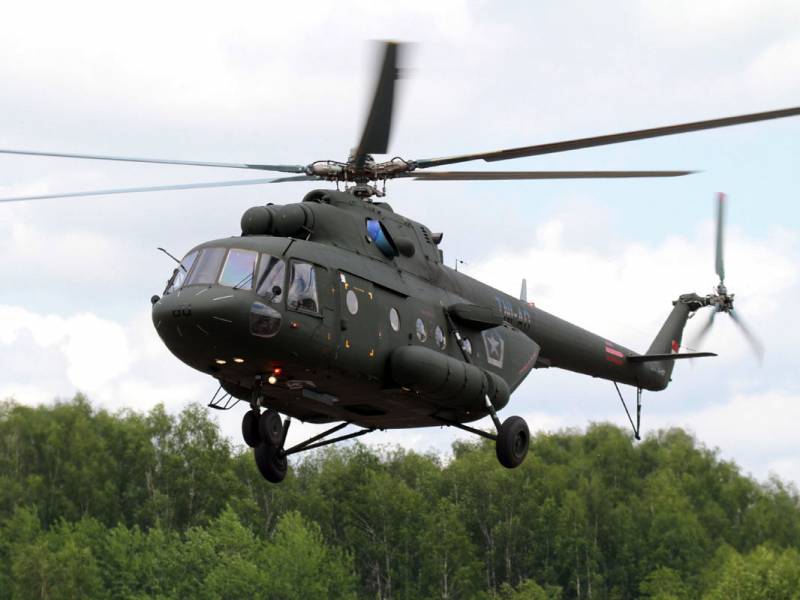 Mi-17B-5 - export designation of the helicopter Mi-8МТВ-5. This is a modern multi-purpose military transport helicopter, which is designed to transport personnel and cargo (both inside the cabin and on the external load). The helicopter can be equipped with an armament set equivalent to a Mi-24 attack helicopter, as well as a crew armor protection complex, the vehicle is adapted to use night-vision equipment.

30 November 2017 Year Agency TASS spread the information that the Ministry of Defense of Uzbekistan and Rosoboronexport signed a contract for the supply of attack helicopters Mi-12 to the country of 35. TASS journalists on the fields of the exhibition "Russia and Uzbekistan: 25 years of strategic partnership" told an unnamed diplomatic source. According to him, the contract between the countries has already been signed, the delivery of attack helicopters Mi-35 under this contract will begin in 2018 year. The lengthy negotiations on the agreement and the terms for its implementation ended in the framework of the recent visit to Uzbekistan by Dmitry Medvedev, the source said. 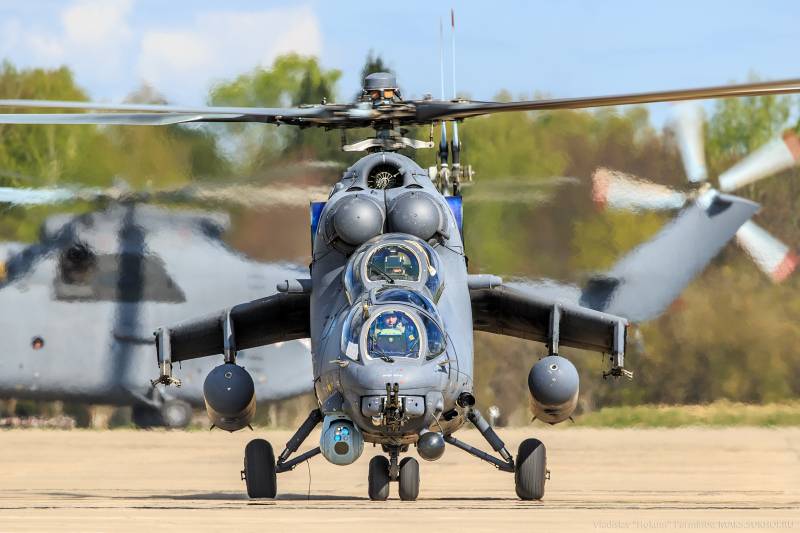 According to the source, the delegation of Rosoboronexport is working in the capital of Uzbekistan, which is engaged in negotiations at the State Committee on the Defense Industry and the Ministry of Defense of the Republic. According to him: “Specialists from Russia arrived in Uzbekistan at the invitation of the republican authorities. Practical measures are being taken to implement the agreement on military-technical cooperation, which was signed in November 2016 of the year. ” The parties signed this agreement in Moscow. It should contribute to the further deepening of mutually beneficial cooperation in the field of military-technical cooperation, in particular, equipping the Uzbek armed forces with advanced weapons and military equipment, as well as repair, modernization and maintenance of existing Russian-made military products.

It is worth noting that the Mi-35 is a modern export version of the most popular combat attack helicopter of the Russian production - the Mi-24. The helicopter is designed to destroy various types of armored vehicles, fire support units of ground forces on the battlefield, landing and evacuation of the wounded, it can also be used to transport cargo in the cabin and on the external suspension. Export interest in the helicopter is quite large. In September, 2017, Russia signed a contract for the supply of a significant number of Mi-35M Nigeria helicopters, and in October of this year, information appeared about signing a contract with Mali; this African country has already received two helicopters as part of the agreement.

Details of the production of Ka-226T helicopters for India

In August 2017, Aris TV and Radio Company published an interview with Yuri Pustovgarov, Managing Director of Kumertau Aviation Production Enterprise JSC (KumAPP), which is part of the Russian Helicopters holding company. The interview revealed new information regarding the reasons for creating a backup production of light multipurpose Ka-226T helicopters at the enterprise of Ulan-Ude Aviation Plant JSC (these helicopters are planned to be delivered to India). Excerpts from this interview published a thematic blog. bmpd.

In an interview with the “Aris” channel, Pustovgarov said that the original order for the delivery of Ka-226T helicopters for India was to be carried out by the KumAPP enterprise. But according to the Indian technical requirements, the helicopter should fly in the mountains at an altitude of 7200 meters. This car requires a new fuselage, a completely new gear, etc. In fact, only the rotor column and the blade remain the same for the helicopter. 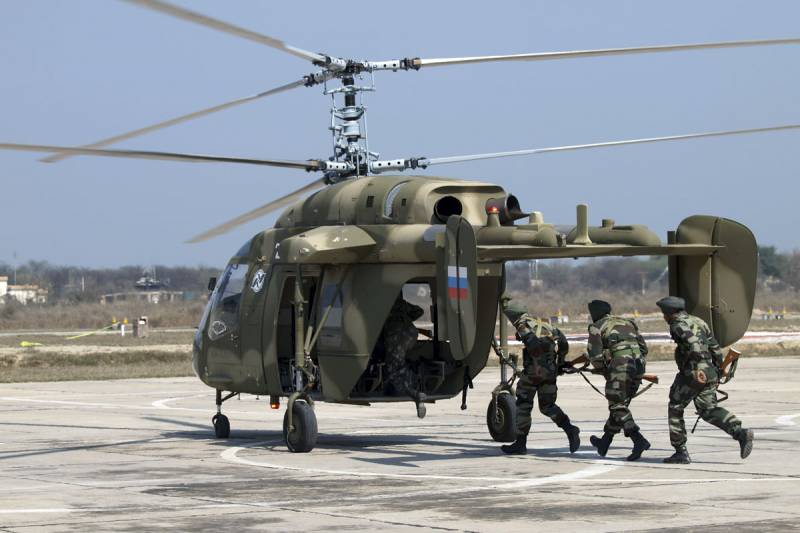 Taking into account the voiced requirements of the Indian side, it was necessary to prepare a new production, the cost of which is estimated at more than 8 billion rubles (and the helicopter itself will appear in 2020 year). At the same time, KumAPP’s financial position did not allow such investments. For this reason, a duplicate production of the Ka-226T helicopter is being created at the Ulan-Ude Aviation Plant, and this is where the “Indian” version of this vehicle will be assembled.

At the same time, KumAPP will continue to produce Ka-226T helicopters for Russian and non-Indian foreign customers. In addition, Yuri Pustovgarov noted that the refusal of the plant from the Indian contract was offset by working with the Russian government customer for the production of a Ka-226 helicopter in a ship-based version. According to him, the helicopter will need to be lighter for this on the 100-150 kg compared to the base model, and also equipped with a new set of electronics. Remarkably, the number of cars under a contract with a Russian customer coincides with the Indian order for Ka-226T helicopters. In addition, under the Indian contract, KumAPP remains a regular supplier of rotor columns and blades (each year these works will bring the company about 1 billion rubles).