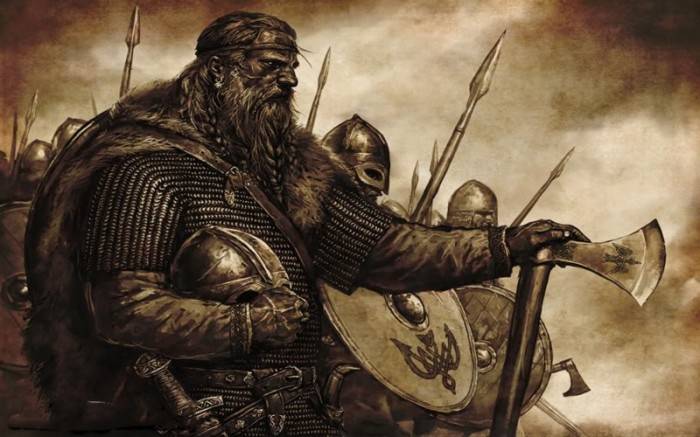 A week ago, 5-th season of the historical series “Vikings” came out on our screens. Francia has a special place in the series. The series describes the storming of Paris and the Viking raids on Francia in general. Also, the brother of the main character is related to the royal dynasty of the Franks. Let's see how it was in real stories and whether it was at all.

From the end of the 7 century to the 10 century, Europe was frightened by the Vikings - the Scandinavian navigators and robbers. One of the most "visited" places by the Normans was the Frankish state.

Viking raids on Europe began because of the hopelessness of their lives. The soil in Scandinavia is not very prolific, there is little land on it, which makes it possible to effectively engage in farming. That is, the majority of the Normans had only one way out - robbery. 830 year is considered the beginning of a special activity of the Vikings in Francia. After regular raids on cities near the Rhine River, northerners occupied lands there, which later turned into strongholds for the raids on Francia. In the 842 and 843 years, the Normans burned Rouen and Nantes, and soon began regular attacks on the poorly protected valleys of the Seine and other rivers in the north of Francia. In the 845 year, 110 of the Drakars, led by the Danish king Ragnar Lodbrok, followed the Seine and broke through to the walls of Paris. The king of the francs, Karl the Bald, managed to assemble an army to defend the city. However, this army was divided into two groups by the River Seine, and a smaller part of Charles's army had to defend the gates of the Frankish capital. This did not fail to take advantage of Ragnar, breaking the small force of the king. Approximately 100 captive royal soldiers sacrificed the Scandinavian god of war Odin in front of the Frankish ruler, after which the Vikings broke into Paris and sacked him. Karl Bald was disheartened. Unable to resist, he offered a large ransom to the northerners. Having filled their drakars with all kinds of good, they swam away.

During the time of the Viking raids, Francia was ruled by kings from the Carolingian dynasty. Its founder was Karl Martell, for the first time the royal throne was occupied by his son Pepin the Short. The Frankish Empire became the second largest state in the world after Byzantium thanks to the acts of King Charles I the Great. Under him, Frankia extended its borders for many miles, and besides, Charles I did a lot for the economy of his empire. Finally, he was respected not only by the common people, but also by the aristocrats.

Trying to protect their lands from northerners, the Franks decided to bribe the Viking kings in order to protect the borders of the Frankish state from their own tribesmen. But this practice did not justify itself, because in addition to protecting the territory, the Vikings also succeeded in robbery. They controlled several large markets in the inner regions of Francia. Because of this, the king had to drive the Normans from their land.

In 911-912, the Vikings, led by King Karl, capture the coastal regions of Neustria. The ruler of Neustria, Carl Prostaty, being unable to drive away the invaders, went to negotiations with Grolf, the result of which was a treaty. Under the agreement, Grolf recognized the vassal dependence on Carl Prostato, accepted Christianity and became a Christian duke under the name Rollon. The king gave his daughter Gisela to him as his wife and Rouen and cities in the Brittany region as land. This treaty laid the foundations of the Norman Duchy, which became the hereditary possession of Rollon and his descendants. In the future, the Norman dynasty played an important role in the fate of Europe.

Duke Rollon. One of the statues to the six dukes of Normandy

Thus, the Vikings brought Europe not only misfortunes, but also participated in its development.

Ctrl Enter
Noticed oshЫbku Highlight text and press. Ctrl + Enter
We are
What you didn't want to know about EnglandTales of Chapai ... or how history is ridiculed
Military Reviewin Yandex News
Military Reviewin Google News
16 comments
Information
Dear reader, to leave comments on the publication, you must to register.