The General Staff called the warlords, the most distinguished in Syria

December 8 2017
55
The Chief of the General Staff of the Armed Forces of the Russian Federation, Army General Valery Gerasimov, listed the Russian military leaders most distinguished during the operation in Syria. 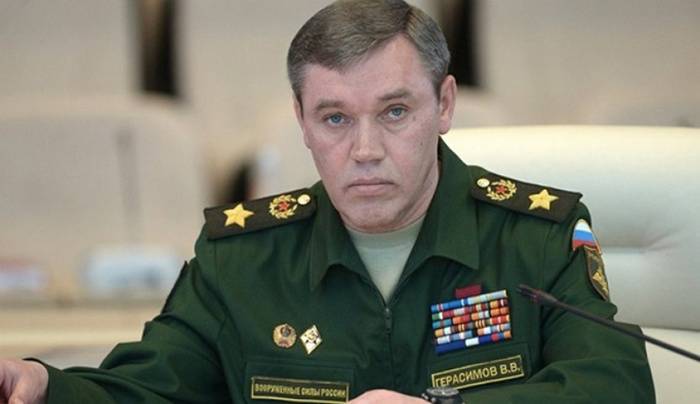 Revealed a whole galaxy of generals with creative thinking ... The most elaborate and unusual acting commanders of army group in Syria, Colonel-General Dvornikov, Kartapolov, Zhuravlev, Surovikin, Chief of Staff Lieutenant-General Lapin, Ustinov, gulls, military advisers major general Muradov, liquid Ivan , Ryzhkov and many others
- Gerasimov said at a gala event in honor of the 185 anniversary of the Military Academy of the General Staff.

According to him, the defeat of the militants of the banned Islamic State * in Syria showed that the Russian troops "preserved the best traditions of the Russian and Soviet armies and are rightfully heirs to their exploits and victories."

Now the Ministry of Defense is faced with the task of introducing the combat experience gained into the practice of building, preparing and using the RF Armed Forces.

Ctrl Enter
Noticed oshЫbku Highlight text and press. Ctrl + Enter
We are
General with Syrian experience. The head of the military operation in Syria was appointed commander of the Southern Military DistrictThe infamous chief of staff of the Central Military District, General Surovikin removed from office
Military Reviewin Yandex News
Military Reviewin Google News
55 comments
Information
Dear reader, to leave comments on the publication, you must sign in.