For the faith, the king and the Fatherland! 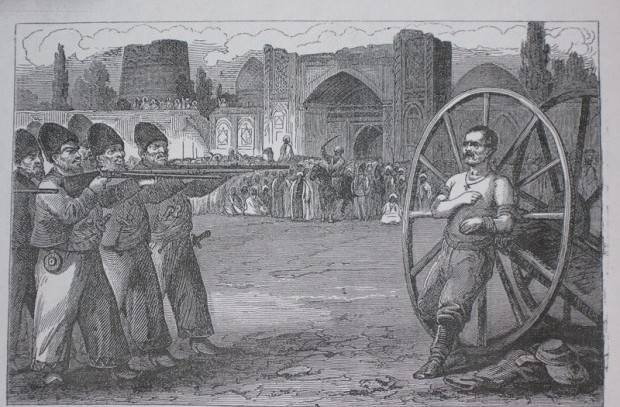 “Thomas Danilov. The tortured Russian hero ”- this is how Fyodor Dostoevsky called his article in the January issue of 1877 of the journal“ Writer's Diary ”. The writer was shocked by the story of the Russian soldier, published a year earlier by the military newspaper "Russian disabled person".

Her hero was the usual Russian 29-year-old male Thomas Danilov, he was from the "economic peasants" of the village of Kirsanovka, Samara province (now Ponomarevsky district of the Orenburg region). In 23, he was recruited into the army, through 4, the service was promoted to non-commissioned officers and soon became the captain of the 2 of the Turkestan rifle battalion. This battalion included the Turkestan Rifle Brigade, took part in the Khiva campaign 1873 of the year, distinguished itself during the capture of the Mahram fortress (August 1875 of the year), which was the center of the rebels of the Kokands.

In November, 1875 of the year, while the battalion was moving from Tashkent to Namangan, one of the wagons and Captenarmus Thomas Danilov (Captainarmus is the same thing as the captain in charge today), along with the soldiers, transferred the property to another arba, and therefore fell behind the main forces and hit captured by Kokands. Prisoners were taken to the city of Margilan (now the Fergana region of Uzbekistan), who was ruled by Pulat Khan, one of the leaders of the Kokand uprising.

The student of the Pulat-Khan madrasah (his real name Iskhak Hasan-uulu) served as an imam in Andijan, he took radical views and declared jihad against infidels.

Therefore, when Russian prisoners were taken to Margelan, he decided to turn this case into a publicly frightening action.

21 November (old style) 1875 of the year he gathered the inhabitants of the city in the central square and ordered to kill the captured soldiers before their eyes. Before execution, soldiers were offered to convert to Islam and enter the service of Pulat Khan, but none of them agreed.

Thomas Danilov, as an officer, decided to be the last to experience. Three times he was offered to renounce Christ and accept Islam, in return promising wealth and high positions, but the Russian soldier stood firm.

“In what faith I was born, in that I would die, and I gave my king an oath and would not betray him,” he replied.

As the “Russian invalid” narrates, Thomas Danilov was tied up and tied to a board. He crossed himself as far as the coherent hands allowed, and 25 Kokand almost at close range gave him the "wrong volley", trying not to kill, but hard to injure. Russian hero remained alive for about an hour. He did not ask for mercy. His resilience made a great impression on the locals, they said that “the Russian soldier died like a batyr,” (that is, the bogatyr).

Two months later, the uprising was put down, Kokand was taken, Pulat Khan was executed for atrocities over Russian soldiers. The remains of Thomas Danilov and other warriors were buried according to Christian rites.

The details of the execution of Thomas Danilov became known thanks to the investigation, which was ordered by the military governor, General Mikhail Skobelev, to be held, and later the investigations were reported in Russian Disabled and other newspapers.

Tsar Alexander II, to whom Thomas Danilov took the oath, appointed the widow of non-commissioned officer Efrosinia and her daughter to retire.

Dostoevsky, amazed by the feat of the Russian soldier, called it "the emblem of Russia, all of Russia, all of our people's Russia." As the writer notes, история Danilova, although it was printed by many newspapers, but passed "quietly", the society and the intelligentsia missed this news.

It seemed martyrdom for the faith - these are cases from the far past, the Orthodox gave their lives for the faith in the times when Russia was under the authority of the Horde, in the Time of Troubles, but it turns out that in the XIX century similar incidents occurred. And these tests passed with dignity, not princes and monks, but the most simple Russian people.

A wave of terrible trials will cover all the Russian people at the beginning of the 20th century, and it will not come from the infidel, but from its own. At the end of the 20th century, the feat of Thomas Danilov will be repeated by Yevgeny Rodionov, a private soldier of the Border Troops of the Russian Federation, who served on the border with Chechnya. Rodionov was captured by Chechen rebels, they demanded that he remove his pectoral cross and renounce his faith, but Yevgeny preferred death to renunciation.

In 2009, for their mission among Muslims, Islamists killed the rector of the Moscow Church of the Apostle Thomas, Fr. Daniel. Faith in Christ and in the 21st century carries a risk to life, especially for Middle Eastern Christians and Christians living in Muslim countries. But, as before, the world progressive community does not care about this.