December 9 2017
8
Recently, discussion of the issue of bringing peacekeepers into the Donbass has intensified. For his part, the author is in favor of the Kremlin’s initiative to send UN troops to the line of separation of the parties in Donbass and fully supports it. However, it is not so simple as it may seem at first glance. 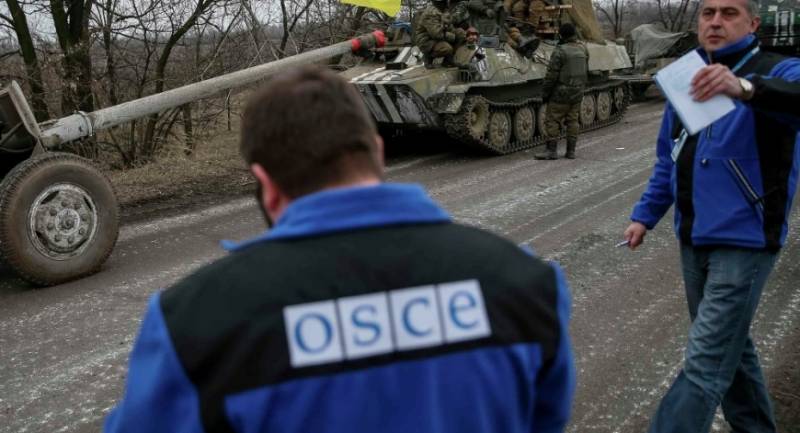 Kiev today, like fire, is afraid of freezing the conflict in the Donbass. Instead, Ukraine imposed a positional war against the LC and the DPR, knowing full well that a full-scale offensive by the Armed Forces of Ukraine (APU) would lead to new “boilers”, and then to the occupation of Mariupol and the exit of the militias to the Crimean isthmuses. But the positional war waged by the Armed Forces of Ukraine is a “dear mother” for many, because it allows one to milk the Ukrainian people, the United States and the EU, and the other to beat out money from entrepreneurs and ordinary citizens for the antiterrorist operation (ATO), or simply So.

Why is the author talking about trench warfare all the time, you ask? After all, there has been a truce in Donbass since the end of 2015. There is no truce there! Shooting goes on there every day. Was gone tank attacks, an artillery duel with 100-152 mm guns goes on once or twice a week, or even for several weeks, but hundreds of people die from antipersonnel and mortar mines and sniper fire. In this regard, we can agree with the Deputy Chairman of the OSCE Mission Alexander Hug, who stated on June 6, 2016 that “the OSCE cannot end the conflict in Donbass. This can only be done by those who participate in it. " On the other hand, the media many times published photos of OSCE vehicles next to tanks and self-propelled guns of the Armed Forces of Ukraine in areas where they are not supposed to be under the Minsk agreements. The guys from the OSCE are silent about this armored vehicle, like partisans. Even worse will happen to the UN soldiers.

WHERE TO TAKE NEUTRAL PEACEKEEPERS?

The rhetorical question is, is there at least one state in the world capable of sending peacekeepers to the Donbass, whose politicians and officers would be neutral with the militia and the Armed Forces of Ukraine? According to the author, it is obviously clear that the UN troops will not be peacekeepers, but allies of Ukraine. It is not difficult to guess that the APU, hiding behind UN forces, will attack the militia. And among the defenders of the DPR and the LPR there are no trained Russian military who are ready to die under enemy fire and not be responsible for the absence of an order from Moscow.

As a result, peacekeepers nakostylyat, and how! And then the United States and NATO will have a weighty reason to bomb the Donbass, and also to introduce there several divisions and brigades "to protect peacekeepers." Recall that the Russian Federation explained the introduction of its troops into South Ossetia by the attack of Georgian troops on Russian peacekeepers. All this will lead to full-scale hostilities directly on the border with Russia. How far from here to the third world?

Fantasy author? So remember how in Korea in 1950 – 1953 years, UN peacekeepers turned into a belligerent. They took and killed over a million North Korean civilians. But a more recent example. In 1993, 10 thousand (!) Blue helmets were delivered to the line of separation of the troops of Croatia and the Serbian Krajina. And at dawn 4 August 1995, the 100 thousandth Croatian army went unnoticed through the positions of the peacekeepers and defeated the Serbian units for five days. And the peacekeepers again saw nothing. Moreover, the aircraft from the American aircraft carrier Theodore Roosevelt bombed the Serbian positions near the city of Kin, and NATO aircraft from Italian airfields bombed the Serbian airbase at Udbina. Motivation is a potential threat to peacekeepers.

Now in Kiev, many dream to realize in relation to the Donbass scenario, implemented in relation to the Serbian Krajina. Back in September, 2014, an adviser to the president of Ukraine and the leader of the Petro Poroshenko Bloc party, Yuriy Lutsenko, spoke about his vision of the development of the situation around Donbass. In his opinion, it is certainly possible to take Donetsk and Lugansk “with a bang-patriotic assault. But street battles will take tens of thousands of lives of the best of us. And it will also lead to a complete collapse and a barely living economy, ”Lutsenko wrote on his Facebook page. In his opinion, it will be wiser to do this when Ukraine has a strong army and economy. “An example is Croatia. After the capture of Vukovar by the Yugoslav army ... the Croats were forced to accept the existence of the Serbian Krajina. For three years, they not only tolerated, but developed the economy and the army. And then, during the hours with a tank attack, they swept the separatists from their land, ”pointed out Lutsenko.

However, let's assume nevertheless that the peacekeepers neutral on both sides will arrive in Donbass. The question is, how can they fight the drones, when the Americans don’t really know how to do it? How will they detect snipers? What about mines?

The entire Donbass planted anti-personnel and anti-tank mines. 3 March 2016, at a meeting in Minsk, representatives of Ukraine, the LPR and the DPR signed an agreement on scheduling demining in the Donbas. I note that it was not about the complete clearance of the entire combat area, but only about 12 small areas in the checkpoint area between Ukraine, the LC and the DPR, as well as along the roads leading to these points. However, this agreement remained on paper. Experts from Germany, Ukraine and other countries independently call the term of mine clearance - 10 – 12 years. The rhetorical question: how many dozens of peacekeepers will immediately die on these mines? And who will they call for mine clearance - Russia or the United States and NATO?

What should Russia do in this seemingly stalemate in the Donbas? To prove to Kiev that time is working against him. Russia has two levers - economic and military.

The first is the integration of the DPR and the LPR into the economy of the Russian Federation. Let them become "areas of priority development." Local and Russian enterprises in the republics should receive many benefits. We need a large range of activities. The military vector is a constant readiness to repel the massive offensive of Kiev and the successful waging of a positional war imposed by the Armed Forces of Ukraine.

In particular, the militia need funds to detect snipers. I note that the Antisniper system of several devices has long been in service in Russia, the militia have been asking for them for several years, but for some reason Moscow is not in a hurry to supply this purely defensive equipment. Does the Kremlin really not understand that, apart from everything else, the Donbass is an ideal testing ground for testing almost all types of Russian military equipment?

By the beginning of 2011, according to official documents of the Ministry of Defense of Ukraine, the APU had 6 million anti-personnel mines. By 2017, about 1 million mines were disposed of at the Pavlograd Chemical Plant with EU money. Where are the others? According to the head of the engineering service of the internal troops of Ukraine, Lieutenant Colonel Vadim Yatsulenko, he received an order to issue anti-personnel mines to the units operating in the Donbas in the spring of 2014.

Two terrible troubles of the Donbass - snipers and saboteurs - can be reduced by an order of magnitude by using a massive formulation of anti-personnel mines across the contact line, motion sensors of various types, as well as pulling hundreds of 82-mm mortars there. When trying large or small groups of the enemy to overcome the minefields mortars should open heavy fire on the squares. I note that all these activities are not violations of the Minsk agreements.

By 2016, the APU developed a “frog jumping” strategy. According to her, the Ukrainian military should regularly seize the territories of the DPR and the LPR in pieces. And now 24 in November 2017, the 54 brigade of the Armed Forces of Ukraine and the Aidar battalion captured two villages near Gorlovka (Travnevoe and Gladosovo). Both villages are located in the so-called "gray" (neutral) zone. It is difficult to knock them out of there, since the military have positioned their weapons literally between the huts and hide behind a human shield from local residents. The outraged population sent a letter to the OSCE representatives asking them to force the Ukrainian military to leave. Kiev television shows laudatory reports about the "release" of Travnevy and Gladosov. The position of the OSCE is “I see nothing, hear nothing, say nothing to anyone”.