December 10 2017
55
Russia has proved itself capable of creating the most complicated technical systems, this is exactly what the first flight of the fifth-generation Su-57 fighter with the "30 Product" engine demonstrated. The development of this engine not only became a major engineering victory, but also allowed us to say that Russia is overcoming one of the most negative tendencies of Soviet aircraft construction. 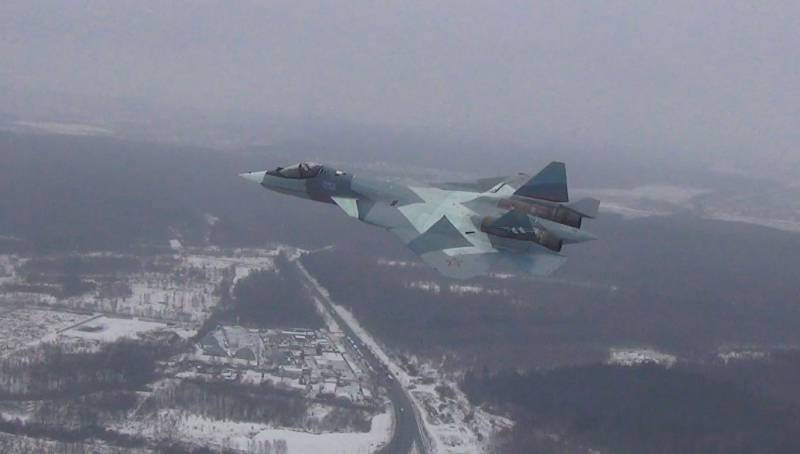 On Wednesday, the first fifth-generation fighter aircraft of the fifth generation Su-57 (known as PAK FA and T-50) were published with the new Type-30 engine (or Product-30). The flight lasting about a quarter of an hour was accomplished on the eve of by the chief pilot of the Sukhoi company, a test pilot, the Hero of Russia Sergey Bogdan. It was reported that the flight went well.

The Type-30 engine for the Su-57 fighter is called a completely new development. It has many advantages, the main of which was increased traction with reduced fuel consumption and new electronic systems.

As a result, engineers were able to increase the maneuverability of the aircraft. Thanks to this engine, the aircraft will be able to make long flights at supersonic speed without afterburner. It was the lack of a new modern engine that was one of the arguments of those who refused to call the Su-57 fighter a fifth-generation car.

Now the government is confident that a successful flight with a new engine "gives an additional impetus to the program of the fifth-generation fighter." “This is proof of the high potential of the Russian aircraft industry, capable of creating highly intelligent advanced systems - a unique airframe, innovative digital stuffing, and the newest engines,” said Minister of Industry and Trade Denis Manturov on the eve.

What a new engine will help a new fighter

The first flight of the Su-57 took place back in 2010, but then it took place with the engine of the “first stage” (“Product-117”) - an upgraded version of the AL-41F1С engine from fourth-generation fighter Su-35C. He was significantly inferior to his American counterparts.

The new engine - "Product-30" - was developed in cooperation of all the design bureaus of the United Engine Corporation (UEC), in particular NPO Saturn. When creating it, engineers applied not only new materials, but also technologies. The result is a unique high-pressure compressor.

One of the Russian know-how was the extremely complex design of the turbine blade. It was made from unique heat-resistant nickel alloys. There was nothing like that in the engine of the first stage. In the American press, the local counterpart of the Russian engine was called "the pinnacle of engineering thought."

“It is the new engine that should fit the Su-57 aircraft into the declared characteristics that make it fully fighter of the fifth generation,” Oleg Panteleev, an expert in the field of aircraft engineering, executive director of the portal Aviaport.ru, said in a commentary to the VZGLYAD commentary. The interviewee explained: in terms of the parameters, firstly, of the cruising supersonic in the driveless mode and, secondly, the reduction of visibility in different ranges of the new product provides significant advantages compared to the engine of the first stage.

Further, such factors as increased specific indicators start to work: specific gravity and specific thrust - all this gives the best performance in terms of what experts call “thrust-to-weight ratio”. “One of the main parameters that characterizes the technical perfection of an engine for a fighter is the ratio of its thrust to weight. The better this attitude, the aircraft as a whole turns out to have better characteristics, ”explained Alexey Komarov, chairman of the editorial board of the Air Transport Observer magazine, in a comment to VZGLYAD.

“This engine is different in that its efficiency should be higher if speaking in a philistine language,” the expert noted. - There are requirements for higher reliability, for a longer life cycle. The combination of these parameters and characterizes the engine of a new generation. "

Accordingly, increases maneuverability, there is the possibility to increase the payload and so on. For all the main characteristics, the product of the second stage is a significant step forward compared to the previous one, experts note.

According to experts, successful tests of the Type-30 engine allow Russia to overcome the unkind tradition of the Soviet era. For example, when creating the M-50 strategic bomber, the designers did not manage to bring the M16-17 turbojet to standard, therefore, the tests were carried out with the VD-7 engine, but in the beginning of 1960's the project was closed ahead of schedule as it did not show the required characteristics.

“Unfortunately, the bad tradition of the Soviet times was to underestimate the complexity of creating an aircraft engine,” Oleg Panteleev notes. - As a rule, we realized that it was necessary to make a new engine, when the designers of the aircraft were already beginning to promise new characteristics to the customer. As a result, the “dvigatelistov” urgently tugged: they say that you can offer us, they created increased obligations. There were precedents when projects did not take off due to the lack of a suitable engine, ”said Panteleev.

Alexey Komarov agrees with this. “Previously, many characteristics of engines, materials, and so on turned out to be as they were. That is, the designers pawned something, but then there was a very important stage of refinement and improvement. And in some cases, it was not possible to achieve the parameters that were set during the design, ”he said.
“Now the science of design has gone far ahead, it is based on powerful computer calculations and modeling,” said the source. “And therefore, the degree of credibility of what happens with respect to what the designers wanted to do is much higher.” Therefore, I assume that there can be no such failures at this stage. ”

“It is still a long time to work”

The first flight with a new engine is a very important stage, Komarov is sure. “The engine is put on the prototype after it has undergone a rather long test cycle both on the ground stands and on flying laboratories,” the source stressed, adding that this is already a more serious prototype.

“The engine is one of the most important systems requiring the largest investments in money and time,” he explained. At the same time, it is still a long time to work before it is fully ready, Komarov said.

"The combat unit, which is a front-line fighter, in addition to the airframe includes elements associated with the control system weapons, engine, weapon system. Only when all these elements will be fully developed, it can be said that the aircraft fully complies with the task set before the developers, the expert emphasized. “So far, at the stage of testing, at the stage of fine-tuning, various systems and subsystems, including the engine, may still not meet the necessary parameters.”

But “the first flight with a new engine brings closer the moment of completion of the creation of the entire aircraft and weapons systems. In addition to the plane, this aviation escort tools that are first used on this machine, and ground-based systems, diagnostic systems, and so on, ”Panteleev said.

“In general, for domestic VKS this is a transition to a new level. Now from the point of view of the engine, there is confidence that all the characteristics will be at the highest level, ”Panteleyev said.