“Shrug shoulders, enough for us to slouch!” 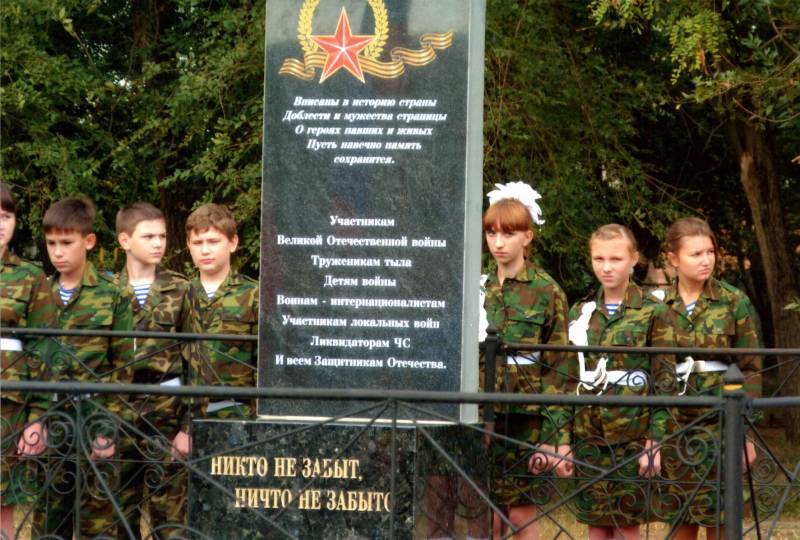 It would hardly be worthwhile once again to draw attention to the embarrassment that turned the infamous performance of the “penitent schoolboy” from Novy Urengoy, if it had not, with amazing clarity, reflected numerous failures with historical the memory of our country. The persistent inarticulation of historical assessments, fawning on the West, the desire to divide the truth into that which is “for foreign”, and intended “for domestic consumption”, are a logical result of many years of calls for “integration at any cost”, recently shamelessly circulated by the media. Of course, over the past quarter century, society, having seriously been ill, has on the whole developed the necessary immunity, including against the notorious “concept of equal responsibility”, which puts on a par with German fascism those who have broken his spine. But, if we ignore the still-occurring attempts to betray our own grandfathers and fathers for the sake of “foreign cookies”, we’ll get to the point of defeat in the 45th aggressor to make compensation claims for German citizens “innocently killed” near Stalingrad. Or something like that ....

The common historical memory is the basis of the existence of any prosperous state. The memory of the people is immeasurably more significant than the momentary benefits and dubious theories based on the “overwritten” liberal dogmas. It is she who plays the main role in preserving Russian identity. The key place is naturally occupied by the memory of the Great Patriotic War and its continuation - the struggle to preserve the post-war world order associated with the cold war. In modern conditions, this memory should be treated with particular reverence - it contains answers to occasionally sly calls to curtail geopolitical activity, return the Crimea, “drain” the Donbass and give unhappy Syria to the “partners” in exchange for the lifting of Western sanctions and preserving the liberal political course.

“Spread our shoulders, stop slouching!” It is necessary to bring back to life the traditional perception of Russian history as a centuries-old confrontation with values ​​alien to most Russians. Even Russia's territorial expansion has always been only a response to the aggressive and unreasonable behavior of its neighbors, with the goal of securing its existence. Understanding this circumstance is especially important at the present time, when the enemy’s efforts are aimed at developing destructive complexes of inferiority and guilt, inflicting as much damage as possible on the collective consciousness of Russians. Aggressive ideological expansion must be contrasted with the influence on public consciousness through the mechanisms of memory and strengthening the connection of generations. Outstanding Russian and Soviet military leader A.A. Ignatiev, in his memoirs (published in the formidable 41), emphasized the role that his father’s simple words played in his famous fate: “Honestly serve Russia, son, in spite of the rulers and what it is called ... Your father did it and your grandfathers and great-grandfathers. The main thing is to be honest with your conscience and do not disgrace the memory of your ancestors! ”

Following the traditions of veterans of the Great Patriotic War, the Coordination Council of Veterans of IDGC of South, JSC, the Rostov public organization of soldiers-internationalists “Danube-68” regularly meet with students, cadets, students of secondary schools. The live word of the direct participants can have a striking effect on the audience. Especially if it belongs to veterans, who are deservedly proud of their combat past, who have fulfilled their duty with dignity, who have not stained their banners with the shame of violence and looting. Our experience allows us to make an unequivocal conclusion: today there is no conflict of generations. Participants in the fighting audience always welcomes standing. And the more pronounced is the contrast with the continuing vagueness of state policy in the field of historical memory ...

On behalf of the absolute majority of the veterans of the Cold War, we call for the start of a broad public debate on the preservation and strengthening of historical memory. We expect that the relevant state structures will take part in it, which until recently did not always demonstrate zeal in performing their direct duties, sometimes hiding behind the personal initiative of those who were not indifferent to the fate of the Motherland of devotees. The focus should be on such fundamental aspects as the organization of public control over curricula and teaching history at all educational levels while enhancing the status of historical science and returning the mandatory final certification in this discipline, such as strengthening the place and role of veteran organizations in public life, bringing to the patriotic education of young people of the cold war and modern military conflicts. It seems relevant and the issue of creating centers of historical memory, necessary for the coordination of collective efforts.

We expect that (albeit with a significant delay) the opinion of veterans will finally be heard, and the outcome of the discussion will have an impact on the formation of a nation-wide system capable of ensuring the formation of a stable patriotic position among the citizens of our country, above all.

We believe in the correctness of our business and sincerely hope that modern Russian society will accept only such historical ideas that will be consistent with the memories and experiences of older generations.

Author:
Hero of Russia, Colonel-General, Chairman of the Coordination Council of Veterans of IDGC of the South, JSC, Candidate of Military Sciences, V. Bulgakov, Coordinator of the RROO VI-I “Danube-68”, Candidate of Sciences, Associate Professor of Southern Federal University A. Baylov
Originator:
http://rassvet21-go.ru/index.php/stranichka-istorika/knigi-stati-publitsistika/295-raspravim-plechi-khvatit-nam-sutulitsya?tmpl=component&print=1&layout=default&page=

Ctrl Enter
Noticed oshЫbku Highlight text and press. Ctrl + Enter
We are
About Stalin and KhrushchevSlipped, fell ... Awoke ... Reflections on the theme of the materialization of mental ideas
Military Reviewin Yandex News
Military Reviewin Google News
21 comment
Information
Dear reader, to leave comments on the publication, you must to register.