Performance in the gas chamber

December 9 2017
56
A stormy scandal broke out around a video posted on the Internet, where a group of absolutely naked men and women chasing each other with laughter and defiant squeals, playing “salochki”, indoors with concrete walls. It turned out that this is a video performance called “Playing with tags”, organized by Polish artist Artur миmijewski and his colleagues. And he shot in the gas chamber of the former Stutthof death camp! 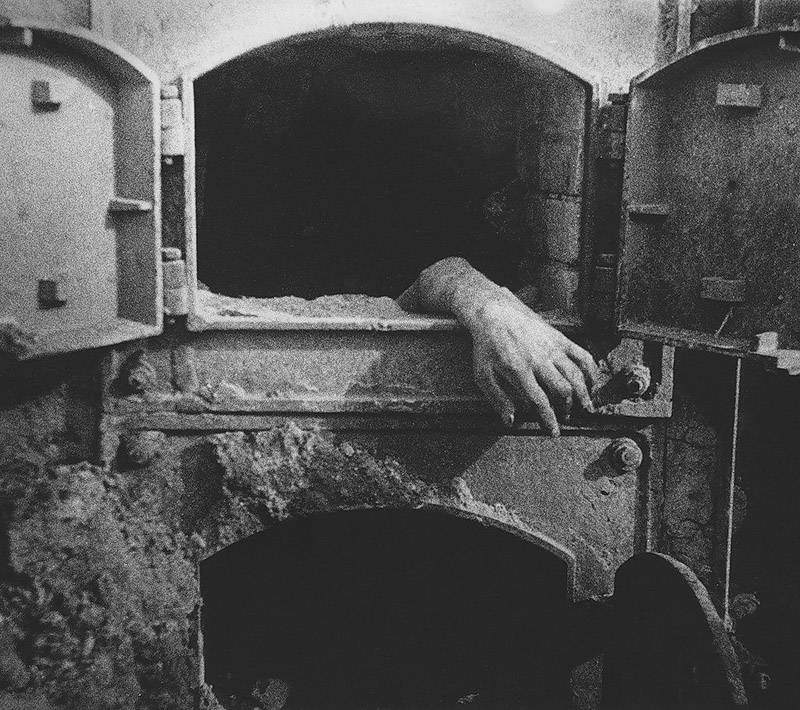 The video was published by the Krakow Center for Contemporary Art and was part of the exhibition “Poland - Israel - Germany. Auschwitz Experience ”, which opened in Krakow, Poland back in 2015 year. The aim of the exhibition was to show the influence of the Nazi death camps on public discourse. In addition, the video was shown in the Museum of Estonia. However, only now it became known that it was shot in the gas chamber of a concentration camp, in which more than 65 thousands of people were brutally killed ...

Stutthof was a real death factory, "famous for" the special atrocities of the Nazis. It is located 37 kilometers from Danzig (now Gdansk), and was founded immediately after the attack of Nazi Germany on Poland as a prison for civilians. Two years later, on October 1, 1941, the camp received the status of a “special camp” and was subordinated to the Gestapo of Danzig.

From 7 in January of 1942 to the end of World War II, Stutthof had the status of a “first degree concentration camp”. It was not just killing people, but also monstrous medical experiments were carried out, production of soap from human fat was launched.
The concentration camp also contained many prisoners from the USSR, including prisoners of war of the Red Army. And the first Soviet prisoners hit the 22 camp on June 1941. They were seamen of Soviet merchant ships stationed in the ports of the Gdansk Bay, interned by the Nazis. The camp was liberated by soldiers of the 48 Army 3 of the Belarusian Front 9 in May 1945.

In the wake of the outbreak of indignation, the Israeli organization of Holocaust survivors, the Simon Wiesenthal Center, have already appealed to the President of Poland and demanded an explanation. Ephraim Zuroff, historian, head of the Simon Wiesenthal Center for Jerusalem, said in this connection: “First of all, I think the video is absolutely disgusting. And this is an insult to the memory of all the people who were killed in the gas chambers during World War II by the Nazis. And this is so outrageous. We have already checked several places where this video was presented. For example, in Estonia it was shown as part of the exhibition, and we complained. ”
However, in Poland itself, a country that suffered more than many others from the war, the appearance of a blasphemous video clip does not seem to have caused any particular protests. Is it any wonder? After all, this happens in a state where today an entire campaign to destroy historical memory - monuments to Soviet soldiers are being barbarously demolished, liberating Poland from the Nazis and saving prisoners of those concentration camps, in the gas chambers of which Polish artists are now organizing "performances".

Performances and Selfies in Auschwitz

By the way, the already mentioned Zhmievsky shot another film with a similar mocking meaning called “80064”. This name is the camp number of Jozef Tarnawa, a former prisoner of Auschwitz. In the film, евmijewski convinces an 92-year-old man to renew the prison number tattooed on his shoulder. The man resists at first, but under pressure from the artist still agrees to do it.

Blasphemous performances in former concentration camps, turned into museums of memory, are being arranged today not only by the Poles.

In March, the so-called performance group consisting of two Poles, a Belarusian and four German citizens was arrested after she also undressed for some reason and chained herself to the fence of the gates of the former Nazi camp Auschwitz. She did it after killing several sheep with knives.
According to local media, they filmed their blasphemous actions with the help of a drone. In addition, participants of the "performance" hoisted a white banner with a red inscription "love" at the gates of the concentration camp, as if thus calling for the condemnation of wars in the world.

Photo sessions are organized in Auschwitz by English tourists. As the Daily Mail newspaper reported, in the pictures, cheerful smiling young people pose against the backdrop of the gates of the death camp, where, according to various sources, between one and a half and four million people were killed. In one of the photos, the girl coquettishly put her foot forward, and behind her, hundreds of pairs of children's shoes left over from the smallest prisoners. The Chairperson of the Association of Friendship of the Holocaust Victims called such pictures shameful and immoral. Lilian Black called on Internet users to think about the thousands of dead, emaciated bodies before they make a photo session in the camp.

However, blasphemous photo shoots in death camps and the desecration of monuments to fallen soldiers, as is seen, are becoming common practice in the West. In the summer, for candid shots at the memorial in Bucharest had to justify the Australian singer Xana. The American congressman, having arrived in Auschwitz, did not find anything better than to read a lecture before the audience ... about the military might of America. And in the Bulgarian city of Plovdiv, unknown vandals recently desecrated the famous monument to the Soviet soldier, known as "Alyosha". They painted it with paint and placed insulting inscriptions. The real war to Soviet monuments has long been declared in Ukraine. The other day, Russian Foreign Minister Sergei Lavrov condemned the actions of the vandals in Kiev, who had filled the Eternal Flame with cement in the center of the Ukrainian capital. The minister called this incident unacceptable blasphemy and the consequence of indulging the Ukrainian authorities to radical neo-Nazis.

With the submission of globalists

Alas, what is happening now in Poland and other countries makes us recall similar cases in Russia. In May 2016, the police of the Stavropol Territory initiated administrative proceedings against two girls who lit a cigarette from the Eternal Flame in Kislovodsk. No one would have known about such an act if the girls themselves had not uploaded a photograph to the network. In March, an 23-year-old unemployed resident of Armavir (Krasnodar Territory) and his friend lit a hookah from the Eternal Flame in the city center. Young people brought to administrative responsibility. In 2015, a group of girls danced twerk against the background of the Malaya Zemlya memorial complex in Novorossiysk.

In Rzhev, three park-servants were convicted, desecrating the local obelisk of Glory and the Eternal Flame. The teenagers made races on the obelisk, and then, taking off their pants, began to warm themselves over the Eternal Flame.
Alas, there are other examples of the same vile deeds ...

Therefore, the loud scandal that flared up recently around the performance of schoolchildren from Novy Urengoy in the German Bundestag, when they began to apologize there to the deputies for the “innocently killed” Nazi warriors who came to our land to be killed and captured at Stalingrad. Although some, including even the teachers of their school, tried to take the disgraced adolescents in Germany under protection, a real storm of indignation arose in the network, and deputies of the State Duma and the Federation Council were asked to figure out how to educate young people in Urengoy, the prosecutor's office.

And it turns out that all that happened in the Bundestag is not at all an accidental reservation of a naive student or an “incorrectly” abridged text of his speech, which allegedly distorted his “patriotic meaning”. As established by Komsomolskaya Pravda, the correspondent of which conducted an entire investigation in Novy Urengoy, the head teacher who led the project of the school trip to Germany — Lyudmila Kononenko, the mayor of the city — Kostogriz, his deputies — Serdyuk, Bondar and Koval, the head of the education department — Tereshchenko — all Ukrainians.

And the history teacher Nikolay Desyatnichenko and other schoolchildren who spoke in the Bundestag, Ella Yavorskaya, are not only coming from Ukraine, but also the mother of an APU soldier who “rides under Avdeevka”.

“Urengoy’s local television,” the correspondent writes indignantly, “is the ugliest report that Kohl spoke for peace, against the war, and everyone who was indignant with his words, well, we just kindle hatred for the Western world.”

It was also established that the ready-made memorial texts about the German soldiers were sent to Germany from the gymnasium, and the students translated the “funeral speeches” and finished their stories about the grandfathers who fought in the Red Army, which they then threw away. The organizers of the trip of schoolchildren to Germany themselves ruled the texts several times, demanding to shorten the words about the Soviet soldiers, then add emotionality. Added ...

After all, the fact is that the destruction of monuments to Soviet soldiers, the mockery on the graves of war heroes, the arrangement of all kinds of “artistic performances” at camp sites and war graves, attempts to hide behind the talk of “reconciliation” and the “inadmissibility of wars” to justify the terrible crimes of the Nazi murderers , - part of the overall strategy of globalism, aimed at revising the outcome of the Second World War. At the same time, he is ignored that the Soviet Union made a decisive contribution to the victory over fascism and the liberation of Europe. They say that we are talking about “war in general”, where “both sides” suffered, and not about an insidious attack on our country with the villainous goal of destroying it, and turning us all into slaves. The idea of ​​“common guilt” is being propagandized, the idea is being suggested that it was not Hitler’s Germany who was to blame for the war, but also the Soviet Union, too. For this purpose, they demolish monuments to Soviet soldiers-liberators of Europe, make entertaining "performances" in the gas chambers of concentration camps, or write penitential speeches to our students ...

Ctrl Enter
Noticed oshЫbku Highlight text and press. Ctrl + Enter
We are
Patriotic dances on the graves of the Red Army soldiers - is this normal for Russia?Historical Sevastopol: oddities, explanations and answers to readers' questions
Military Reviewin Yandex News
Military Reviewin Google News
56 comments
Information
Dear reader, to leave comments on the publication, you must to register.