December 11 2017
33
Whenever America gets into a crisis, Russia turns out to be a “whipping boy,” says famous historian Ivan Kurilla. 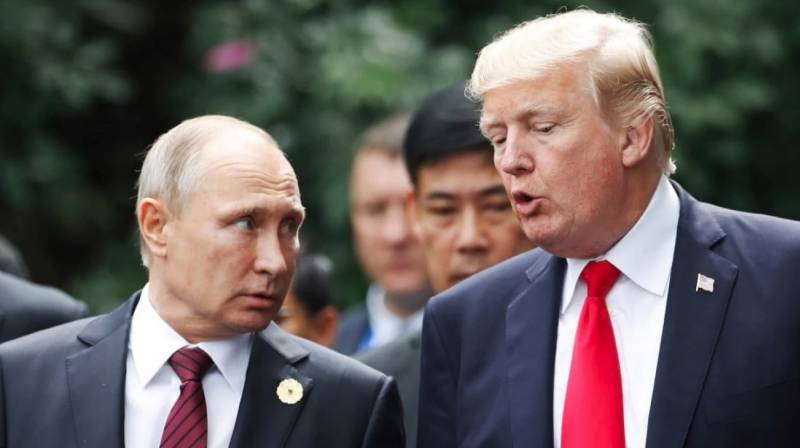 Ivan Kurilla - Professor, Historian, Doctor of Science, an employee of the European University (St. Petersburg), an expert in the field of US-Russian relations. In his last article, published in English in the newspaper Washington Post, he talked about "old stories”, Which is repeated every time the United States falls into the crisis period: in this case, Russia always finds itself in the role of“ whipping boy ”.

The Russians are watching the scandal over Russia's “interference” in the American election of 2016 of the year with a mixed feeling, in which there are pride, indignation, and regret, the scientist believes. The anti-Russian message flow in the media reminds the American-Russian relations specialist an old story that repeats over and over again: when America is in crisis, Russia turns into a “ready-made whipping boy.”

Supporters of President Vladimir Putin are proud of the great achievements of the Russian state and its powerful leader who, with the help of a “wise and cunning” plan, was able to influence even the election of the US president. Government propagandists deny all accusations of electoral contrivances and at the same time use the “obsession with Russia” to praise the successes of Putin, this world-class leader.

The Russian liberal critics of the Putin regime, the same reason saddens. They believe that the American media and the American political class greatly exaggerate the influence of Putin. According to Russian liberals, this “obsession with America” for the second year in a row only reinforces Putin’s dying popularity “at his home”. Liberals are also concerned that this vulnerable image of the American political system contributes to anti-democratic ideas and corresponding rhetoric in Russia.

All of this is very important for Russia, since "domestic policy has long been linked to relations between Moscow and Washington." Periods of growing cooperation between the US and Russia usually coincided with the liberalization of politics in the country, while each wave of hostility found its victims among Russian liberals and canceled their democratic agenda. The damage inflicted on US-Russian relations in the long term is regrettable "among pro-Western Russians."

The majority of Russians (and of those who oppose the Putin regime, and of those who are devoted to Putin), the historian continues, simply do not understand why the tone of the American media was “so anti-Russian.” If anxiety concerns trump's teamwork, then why “demonize Russia”?

Here, in Russia, many compare what allegedly happened in the elections in the United States, with America’s alleged interference in elections in Russia. For many Russian liberals, today's reports of investigations enliven the history of the 2012 protests of the year against election fraud in Russia. State propaganda at the time marginalized the leaders of the protest, linking them with American diplomats. There was a demonization of America. Michael McFaul, the then US ambassador to Russia, was just “a victim of this propaganda campaign.” In 2017, the boomerang returned in the form of a noisy public resonance against Russian Ambassador Sergei Kislyak. Russian liberals considered this a “mirror image” of those events.

Considering the history of US-Russian relations, the historian finds in the past several cases similar to what is happening now. The Cold War had its ups and downs, the author points out. After a period of detente and relaxation of tensions (the first half of the 1970's), new conflicts arose that occurred during the second half of this decade. Before the Soviet Union sent troops to Afghanistan (1979 year), President Jimmy Carter allowed himself serious criticism of Moscow. The reason was the "violation of human rights." From the perspective of America’s “moral superiority,” he called for attacking an old rival in the Cold War — and that was the very moment when America’s global glow dimmed because of the Vietnam War and the Watergate scandal. The main goal of Carter (and then Reagan) was to restore "American pride." Russia was used by both presidents as a gasket.

For a whole century before Mr. Carter, the Americans experienced another identity crisis: it was in the era after the Civil War and the recovery period. The credibility of American moral leadership was then undermined. George Kennan's publication of his book on the Russian tsarist system of exiles in Siberia (do not confuse this Kennan with the last Cold War diplomat George F. Kennan, a distant relative of the first) in 1891, opened the way for Americans to condemn "Russian despotism." They could compare!

Undoubtedly, Tsarist Russia, the Soviet Union and modern Russia should be criticized for its “corrupt political system and human rights violations,” the author continues. However, one cannot ignore the fact that the American debate on Russia and the intensity of the relevant discourse cannot be explained solely by the actions of Moscow.

“The Russian theme rises in American society only under conditions of internal crises; Russia is portrayed either as a threatening source of distemper on the domestic front, or as some kind of low-level force that deserves notation from its superior Americans, ”Kurillon says ironically.

Both of these images are central to maintaining America’s confidence in its historic mission — the world leader of democracy. Americans, as the theologian R. Niebuhr once remarked, love to try on the clothes of “educators of humanity”.

Considering the current “American obsession with Russia”, it should be noted that Russia is again being used in the internal struggle in the United States as a whipping boy. Many Americans "clearly despise Trump," notes Kurilla. They find him "somehow non-American," because his position and his appearance "contradict their understanding of what it means to be an American leader." The “collusion” scandal is a convenient reason for their suspicion.

Other Americans simply consider this a good tool for putting pressure on an "unpredictable president." Trump's team meetings with the Russians, be they completely innocent, allowed the critics to reinforce the “demonic image of Russia.”

What happened and what else will happen to Mr. Trump is “a fully American issue,” which “has very little in common with Russia.”

In this sense, the historian is concerned about the impact of the recent media campaign and political rhetoric on Russian-American relations. The short-term results of this story are already obvious: public opinion based on suspicion will not allow D. Trump to take any step towards improving relations between the two countries or agree on a compromise on topical issues (for example, on nuclear weapons or European security).

The long-term consequences are much more serious: the revival of the image of “demonic Russia” that threatens the US political system, the sense of vulnerability and weakness of the American democracy in relation to authoritarian claimants to influence, and finally, “the refusal to understand Russia's problems” even if Russia acts rationally.

The image of “threatening” Russia will poison the future of bilateral relations after Trump and Putin “become history”. The ghosts of the current hostility towards Russia may arise again when another crisis breaks out in America, which again will require a scapegoat.

The famous historian spoke clearly and unequivocally on a depressing subject. The international scandals that have now spoiled relations between Washington and Moscow have a long “tradition”. (Let's use this particular word, despite the fact that the writer Soloukhin ordered to understand the tradition exclusively in a good sense.) And this “tradition” will poison not only the relations of the current period, when certain presidents rule the United States and Russia and set certain elites, , with mutual “demonization” and with “mirror” answers, it will also stretch into the future, leaving an imprint on the relationship in the long term.

In this case, the new cold war will last, like the old one, for decades, despite the fact that the former ideological basis cannot be under it. The Russians, under the leadership of the Kremlin, no longer impose communism on the planet - on the contrary, looking at the United States, they “created” oligarchic wildest capitalism. Reagan’s theses on the evil empire and his prophecy about the collapse of communism will thus be out of place in the struggle. However, the Americans, these world “educators,” still intend to read “notations” to those who have trouble with “human rights” or freedom of speech. There is a reason!

And if internal squabbles and feuds continue in the US, Russia will remain the designated “whipping boy.” How can this end in our sad time when a new arms race is unleashed?