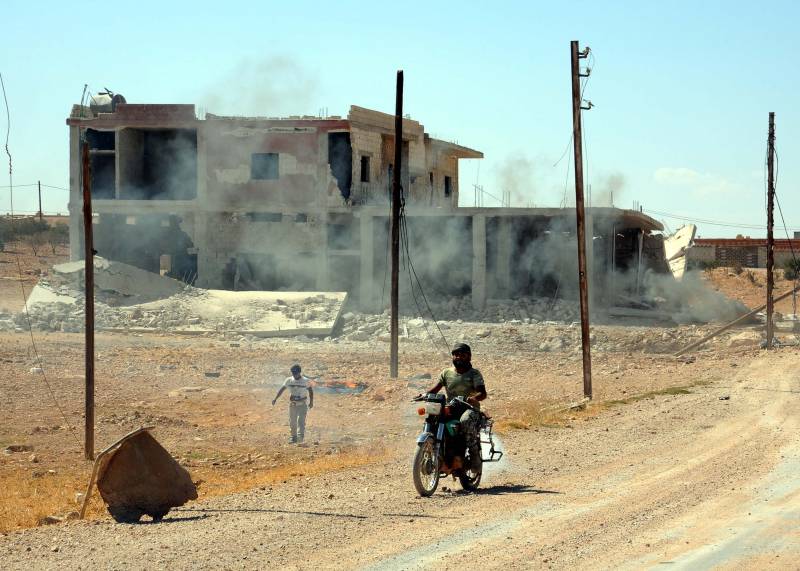 Yesterday in the village of Harasta, located in the nearest suburb of Damascus, fighting continued between the CAA and opposition militants for control of a warehouse of military equipment. One local source said that the Syrian Free Army (FSA) also came out against government forces. Near Beit Jinn, in the Tel Barday hill area, clashes between the Syrian army and Dzhebhat an-Nusroy (banned in the Russian Federation) were again recorded. In the middle of the day it was reported that the Israeli Air Force hit the warehouse weapons Hezbollah, as well as the control tower of the Ad-Dumeir military airport.

The Russian Space Forces and the Syrian Air Force delivered point-to-point strikes against the deployment zones of the militants of the terrorist coalition in the vicinity of the settlements of Ramla, Siyal, Burj Saban and Marbaa Beyush in the south of Aleppo province.

The terrorists of the IG (banned in the Russian Federation) who lost their last positions in the province of Deir-ez-Zor moved from real counterattacks to informational ones. According to a source controlled by IG on Twitter, the location of the Syrian Arab Army (CAA) near the settlement of As-Salihia was attacked by a suicide bomber. Independent channels, as well as the official media did not confirm this information. Detachments of the Syrian Democratic Forces (SDF) captured the settlement of Swedan in the east of the province. During the clashes in the area of ​​the settlement, the Kurds destroyed the 35 IG terrorists.

The Russian Aerospace Forces and the Syrian Air Force attacked the positions of al-Nusra in the province of Idlib. Under the blows aviation the allies found themselves strongholds of radical Islamists in the vicinity of the settlements of At-Tamania, Mrejeb al-Mashhad and Khan Sheikhun.

Fighters of the Syrian Democratic Forces (SDF) defused 651 with an explosive device near the Al Hisha wastewater treatment plant in the north of the city of Rakka. At the same time, three civilians were killed in a mine explosion in the central part of the city.

Russian and Syrian aviation attacked Islamist positions in the north-east of Hama province. As a result of the last air attack in this part of the region, a group of 15 IS militants was destroyed. Violent fighting between government forces and militants of the terrorist coalition was observed in areas of the cities of Rahadzhan and Al-Shakusia.

Ctrl Enter
Noticed oshЫbku Highlight text and press. Ctrl + Enter
We are
Reports from the militia of New Russia for 27-28 September 2014 of the year
Military Reviewin Yandex News
Military Reviewin Google News
17 comments
Information
Dear reader, to leave comments on the publication, you must to register.