December 10 2017
47
The best firing fortifications include those that require less time and money for erection, are barely visible on the ground and are able to suddenly open effective fire on the attacking enemy.


In the system of long-term and field fortification, two directions have long been realized: small transportable fire installations, quickly installed on positions, and concealed structures. 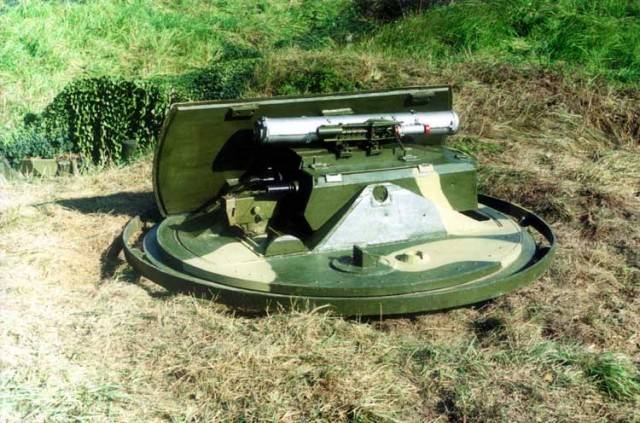 In 1990, in the Central Research Institute of Precision Engineering (TsNIITOCHMASH, Klimovsk, Moscow Region), an experimental design work was opened on the “installation for firing fortifications with a mechanically driven control weapons". OCD received the cipher "Gorchak", led by leading design engineer V. I. Altunin. It was about creating a quickly erected fire structure with a ready-made "fighting compartment" in the form of a hiding armored shelter, carrying a range of weapons to combat various targets, including low-flying air. In 1996, the installation was put into service under the designation “universal firing structure of the hidden type”, retaining, according to tradition, the design code “Gorchak”. Serial production of the plant was organized by OJSC Motovilikhinskiye Zavody (Perm) - it had previously produced prototypes of Gorchak according to TsNIITOCHMASH documentation.

The Gorchak Universal Fire Erection Facility (ASD) is intended for the operational construction of defensive lanes, fortification equipment of fortified areas, roadblocks, border zones, and the organization of protection lines for important objects (for example, the Strategic Missile Forces points).

The basis of a double fire structure is a cylindrical base, equipped with sealed doors. In the upper part there is a block of armament, fixed under a reclining armored cover, and observation devices. The armament unit is equipped with various types of weapons - automatic “anti-personnel” weapons of decking (machine guns) and decking-mounted (automatic grenade launcher) fire, weapons for fighting lightly armored ground and low-flying air targets (large-caliber machine gun), guided anti-tank anti-tank weapons (ATGM). In the present embodiment, the Gorchak FOC carries in a swinging armored block:

Under the block of weapons are jobs for the calculation. The complex of devices allows the calculation to conduct constant observation of the battlefield, timely detect and identify targets.

ASC “Gorchak” is transportable, transported by automobiles of the type ZIL-130 (one UOS) or KAMA3-4310 (two UOS), by rail. To install the SLD at the selected position, a cylindrical recess with a depth of 2,0 m and a diameter of 2,5 m with an adjacent blocked trench is prepared by using an engineering digging machine in the ground to enter the SLD calculation. In the hidden position, the weapons unit is in the lowered position, the hatch in the roof of the building is covered with an armored cover. The height of the structure above the ground does not exceed 150 mm, which makes it unobtrusive, while using simple masking measures, it is almost imperceptible on the ground for ground and aerial surveillance. When translated into the firing position, the upper cover of the ASD opens, the armament unit rises up - the installation is ready for the opening of fire.

The height of the structure above the ground surface in a combat position is increased to 600 mm. FOC is characterized by a combination of enhanced protection and improved habitability conditions for combat crews. The armored lid withstands a direct hit by a field gun. However, the greatest protection gives a low visibility structures. Weapon control is remote, using periscopic viewing blocks, aiming and pointing devices, both calculation numbers are constantly below ground level. The combination of transportability and the scheme of the hiding installation gave the construction a new quality - the ability to quickly create a defense system without significant time costs, relocation by road or rail. The MS Gorchak can also be used as part of a more solid buried long-term firing structure.

Ctrl Enter
Noticed oshЫbku Highlight text and press. Ctrl + Enter
We are
An-12 in AfghanistanReport from TsNIITOCHMASH. Part I. Weapons and ammunition
Military Reviewin Yandex News
Military Reviewin Google News
47 comments
Information
Dear reader, to leave comments on the publication, you must to register.