December 8 2017
9
December 8, 2017 marks the 90th anniversary of the Soviet cosmonaut, Lieutenant General aviation, twice Hero of the Soviet Union Vladimir Alexandrovich Shatalov. When they say that a talented person is talented in everything, this can be safely attributed to Vladimir Alexandrovich, who, among other things, is a candidate of technical sciences, a military pilot of the 1st class and an astronaut of the 1st class. Shatalov, along with Alexei Stanislavovich Eliseev, became the first of the Soviet cosmonauts who managed to make three flights into space.


It should be noted that Vladimir Aleksandrovich Shatalov is the oldest living cosmic explorers today. He became the 13-m Soviet cosmonaut who traveled to the stars after three flights aboard the Soyuz-4, Soyuz-8 and Soyuz-10. It is curious that the second astronaut in terms of longevity also lives in Russia today - this is Anatoly Filipchenko, who celebrated his 2017 anniversary in February 89. A total of 11 cosmonauts living in Russia and neighboring countries today, whose age has already exceeded 80 years, include the first woman cosmonaut Valentina Tereshkova.

The future cosmonaut was born on December 8 1927 in the city of Petropavlovsk in the Petropavlovsk district of the Akmola province of the Kazak Autonomous Soviet Socialist Republic as part of the RSFSR (today the administrative center of the North Kazakhstan region of the Republic of Kazakhstan) in the family of a railway worker. His father, Alexander Borisovich Shatalov, worked in Petropavlovsk as a communications dispatcher, station duty officer. In the future, for special merits in the organization and provision of transport for the front and the national economy, he was awarded the title Hero of Socialist Labor. 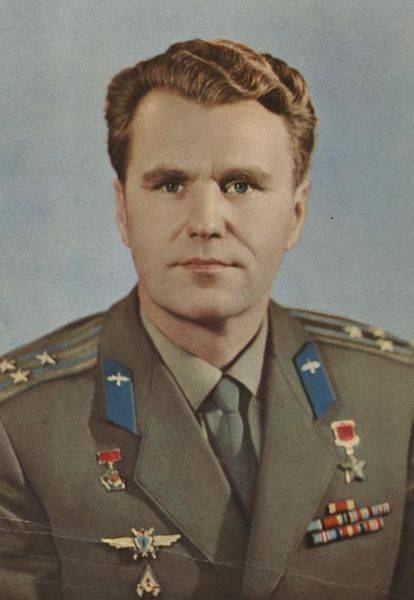 In the middle of 1930, Alexander Shatalov moved with his family to Leningrad, where he entered the local institute of railway transport engineers. So childhood and the first school years of the future cosmonaut Vladimir Shatalov were held in the city on the Neva. While studying at school, Shatalov was fond of aircraft modeling, being engaged in a circle at the Palace of Pioneers. Already in childhood, began to show his love of the sky and flying. Before the beginning of World War II, he managed to graduate from 6 classes of secondary schools in Leningrad. In July-September, 1941 took part in the construction of defensive fortifications in Gatchina, and then ran off to his father for the front. In fact, he became the "son of the regiment", was together with his father, a radio operator as part of the repair and recovery train "Svyazrem-1".

For a month and a half he took part in the defense of Leningrad, after which he was sent to his native Petropavlovsk, where his family was already evacuated. Here he continued his studies and in 1943 year he graduated from the seven-year school. Even then, he knew that he wanted to become a military pilot. Therefore, after completing seven classes, he entered the 6 th Voronezh Air Force Special School, which was evacuated, first to Karaganda and then to Lipetsk. After training in the Air Force Special School, he enrolled in July 1945 at the 8-th Military Aviation School of Primary Pilot Training, after it was closed in August of the same year, he continued his studies at the AF Myasnikov Red Banner Military Aviation School at Kachin. From that moment on, the report of his service in the ranks of the Soviet Army began. In 1949, he successfully completed his studies and became a military pilot. 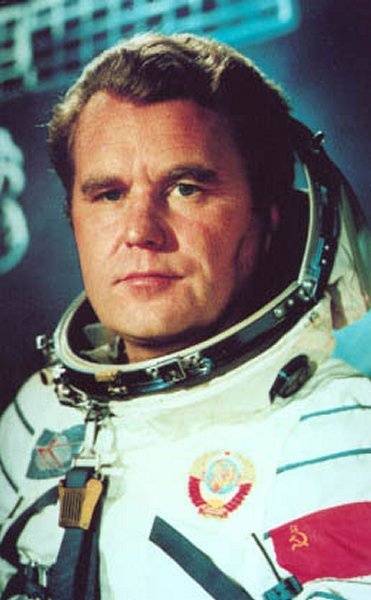 In 1956, Vladimir Shatalov successfully graduated from the command department of the Red Banner Air Force Academy of the USSR Air Force. From November of the same year, he was the deputy commander of the squadron, and from May 1960 of the year - the deputy commander of the aviation regiment in the air force combat units. Since February, 1961 has served as a senior inspector-pilot in the combat training department of the 48 Air Army of the Odessa Military District. His military career developed very successfully. After graduating from flight school as a lieutenant in 1949, by 1962, he was already a lieutenant colonel. In the Odessa Military District, he served until the 1963 year, until he was enrolled in the cosmonaut corps, from that moment began a new stage in his life and career.

10 January 1963, Shatalov was enrolled in the Cosmonaut Training Center (CPC) as an astronaut listener. From January 1963 to January 1965, he underwent general space training here, simultaneously studying the design, systems, and operating rules of operating spacecraft. 13 January 1965 of the year after successfully passing the exams Vladimir Shatalov received the classification of the "astronaut of the Air Force" and on January 23 was appointed to the post of cosmonaut of the second detachment (military space programs). In parallel with this, in January-March 1965, he was trained at the Air Force Combat Operations Center in Lipetsk, where he flew MiG-21, IL-14 and Tu-104 aircraft.

His first flight into space could take place in March 1966 of the year. Prior to that, he was trained for flying in the Voskhod-3 spacecraft under a military program as co-pilot of the second (backup) crew, along with George Beregovoi. The planned flight duration was to be 16-20 days. March 5 1966 was approved by the State Shatalov Commission to conduct a space flight. Crews went to the site, the spacecraft passed all tests and checks, but the launch was first postponed, and then canceled completely. From January 1967 to January 1968, Vladimir Shatalov was trained as part of a program to dock two spacecraft in orbit, both as commander of the “passive” and as commander of the “active” ship. Until his first flight into space, there was still a year. It was carried out in mid-January 1969. 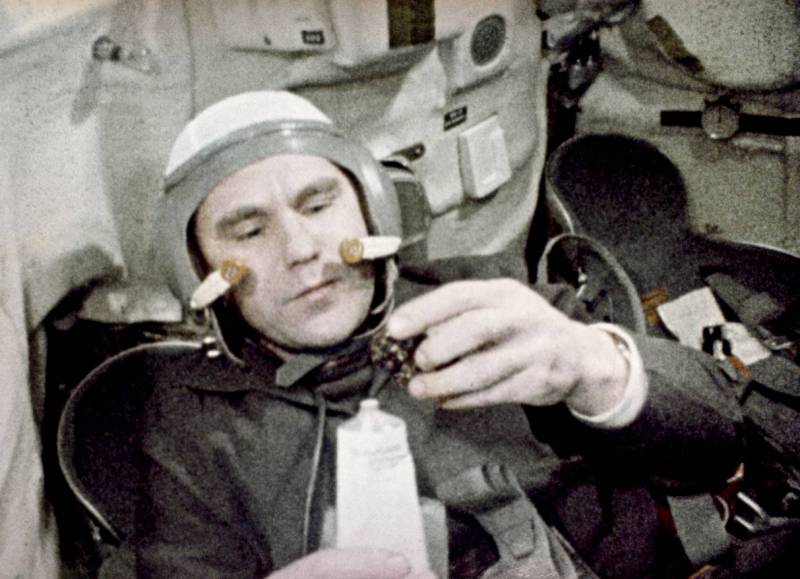 22 January 1969 of the Year by the Decree of the Presidium of the Supreme Soviet of the USSR for the successful execution of a space flight and ensuring the world's first transition of astronauts from one spacecraft to another, made during the orbital flight of the Soyuz-4 and Soyuz-5, as well as manifested during this courage and heroism Vladimir Aleksandrovich Shatalov was presented to the title of Hero of the Soviet Union with the award of the Order of Lenin and the Gold Star medal.

Shatalov performed the second space flight as early as October 1969 of the year as commander of the Soyuz-8 spacecraft in a crew with A. S. Eliseev. The flight went from 13 to 18 in October 1969, and was a group flight. Three Soviet spacecraft took part in it at once: "Soyuz-6", "Soyuz-7" and "Soyuz-8". As part of the flight, mutual maneuvering of spacecraft in a manual control mode using autonomous navigation measurements was worked out. As part of the flight, a docking with the Soyuz-7 was planned, but it was not carried out due to the failure of the Needle approach and docking system on the Soyuz-8. During this flight Shatalov spent in space 118 hours 11 minutes. Already on October 22, Vladimir Shatalov received the second Hero Star, becoming the twice Hero of the Soviet Union. Two successful flights into space and two awards of the highest degree of distinction of the USSR divided the whole 10 months among themselves. 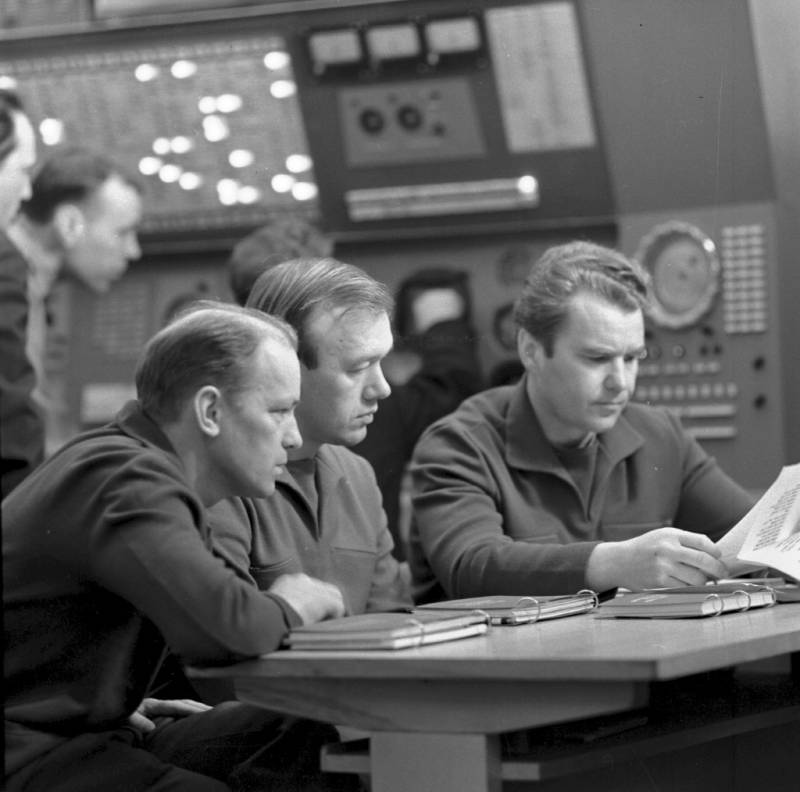 His third space flight, Vladimir Shatalov, performed in April 1971 of the year. The flight took place from 23 to 25 on April 1971, together with A. S. Eliseev and N. N. Rukavishnikov. Shatalov was again the commander of the spacecraft, this time of Soyuz-10. 24 April 1971 was successfully docked with the Salyut orbital station. But the planned transfer of astronauts from the ship to the station did not take place, the reason was the breakdown of the docking station of the ship, which did not allow for their complete tightening and tightness of the joint. As a result, the transfer to the orbital station was canceled and the flight was stopped ahead of schedule after performing a flyby of the Salyut orbital station and photographing it. This time, Vladimir Shatalov spent 47 hours of 46 minutes in space.

After returning from an 25 flight on April 1971, Shatalov was introduced to the next military rank, becoming a major general of aviation. In the same year, in June, Vladimir Alexandrovich was expelled from the cosmonaut corps in connection with his appointment to the post of Assistant Commander-in-Chief of the Air Force for the preparation and support of space flights. His experience and knowledge were now needed on earth to train future explorers of space.

28 April 1972 Vladimir Aleksandrovich Shatalov successfully defended his thesis at the Y.A. Gagarin Air Force Academy, receiving a degree in technical sciences. 25 April 1975, he was awarded the next military rank - Lieutenant General of Aviation. The pinnacle of his career is that from 3 in January 1987 to 19 in September 1991, Lieutenant-General Vladimir Shatalov headed the Yu. A. Gagarin Cosmonaut Training Center. By the decree of the President of Russia from 9 in May 1992 was dismissed, Shatalov devoted more than 45 years to the service of his country. 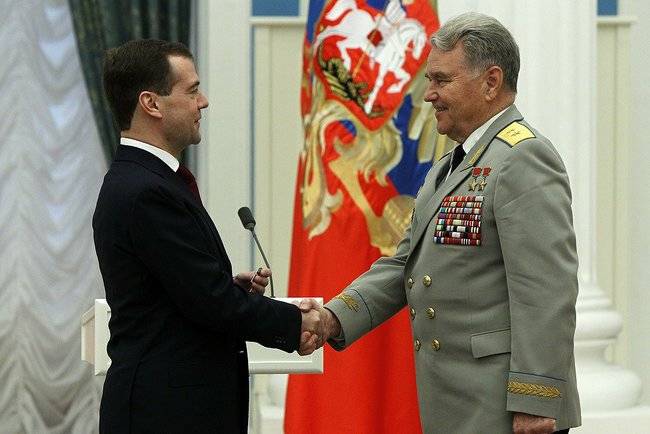 The merits of cosmonaut Vladimir Shatalov were awarded not only with numerous government awards. In his honor, the Shatalov crater with a diameter of 24,05 kilometers in the Sea of ​​Moscow on the far side of the Moon was named. Also in 1979, a monument was erected in his native Petropavlovsk. Postage stamps with a portrait of an astronaut were also issued. In April, a star dedicated to Vladimir Shatalov appeared on the cosmonauts alley at Yaroslavl Planetarium. Every year on this alley, new stars are opened, dedicated to people who have linked their lives with the conquest of space. Vladimir Aleksandrovich is also an honorary citizen of the cities of Kaluga, Kurgan, Nalchik (Russia), Karaganda, Petropavlovsk (Kazakhstan), Prague (Czech Republic) and Houston (USA).

Ctrl Enter
Noticed oshЫbku Highlight text and press. Ctrl + Enter
We are
Results of the week. "Well, do not change me because of every idiot!"Yuri Drozdov: Russia prepared the role of the sacrificial calf
Military Reviewin Yandex News
Military Reviewin Google News
9 comments
Information
Dear reader, to leave comments on the publication, you must to register.