How will the "Tritons" change the air situation at the western borders of the Russian Federation after 2018? 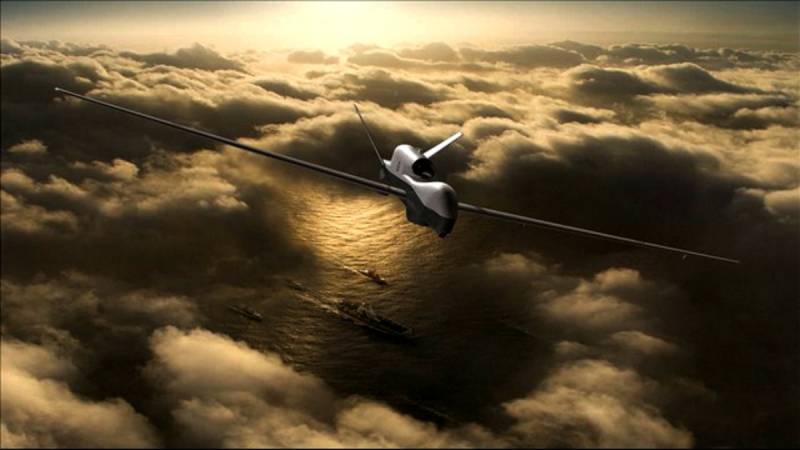 Literally every week in news sections of the "Military Review" and other Russian news agencies, you can find small publications about the incessant flights of British and American electronic and optical-electronic reconnaissance aircraft RC-135 V / W "Rivet Joint", patrol P-8A "Poseidon", as well as unmanned strategic scouts RQ-4A / B near the A2 / AD air lines of the Kaliningrad exclave and the Republic of Crimea. In order to intercept, analyze and ultimately create a digital database on the frequency modes of operation of radar detectors and radar surface-to-air missile systems S-300PM1 / V4 and S-400, as well as reconnaissance of the parameters of tactical communication radio channels and data exchange between air defense missile systems and RTV units, data machines spend in neutral airspace over the Black and Baltic Seas for a total of several dozen hours a week. As for the strategic unmanned reconnaissance aircraft RQ-4A "Global Hawk" with the call sign "UAVGH000", as well as the patrol aircraft P-8A "Poseidon", the first of which occasionally runs 25-60 km from the contact line in Donbass, and the second - in a few tens of kilometers from the Crimea, then their tasks also include long-range optical-electronic reconnaissance of coastal military facilities by means of onboard optical-electronic means (the former does it much better).

Global Hawk, with its integrated rotary optical-electronic complex SYERS-2B / C, located in a cylindrical module (in the forward fuselage niche), of course, has much higher intelligence capabilities. The multispectral complex SYERS-2B / C has a significantly higher luminosity due to the large diameter of the camera's mirror, while the optical zoom exceeds the mark in 40X, as well as the OBC standard camera for American reconnaissance. Ideal abilities of this complex can be demonstrated with maximum transparency of the atmosphere, and therefore, in a normal meteorological environment. Given that the machine operates at altitudes from 15,5 to 18,5 km, the distance to the objects being explored can reach 150 - 200 km without high loss of image quality. In one of our works concerning the reconnaissance flight of the UAVGH000 board in 25 km from Mariupol, it was noted that SYRERS-2B / C can easily monitor the Russian military infrastructure near Eisk and Taganrog, which is cause for concern. As for the P-8A "Poseidon" operating in the Sevastopol and Feodosiya NR, here the entire emphasis is placed mainly on the on-board electronic reconnaissance equipment (station SPO / DER AN / ALQ-240 (V1)), as well as the airborne radar complex AN / APY-10 (official index AN / APS-137D (V5)).

Despite the fact that the APY-10 is represented by a parabolic antenna array (the classic type of radar), its efficiency and performance remains at an extremely high level. In particular, due to the high peak power in 50 kW and centimeter X-band work. These two parameters, in combination with modern on-board computers, allow achieving resolution in 3,5 m in standard tracking mode and 1 m - in ISAR mode (the so-called “reverse synthesized aperture”). At the same time, frigate targets can be detected at a distance of about 270 km. The MH-20HD turret television complex can also be used, but not much will come of it, despite even the powerful 60-70-fold optical zoom. Indeed, because of the lower (than Global Hawk’s) height of duty at 10 - 12 km, to achieve a satisfying atmosphere transparency, the Poseidons must fit almost under the aerial borders of Crimea, which the Americans, for understandable reasons, try not to allow. The P-8A P-9A conducts more or less assured optical reconnaissance only for the disputed Spratly archipelago in the South China Sea, where it is in their favor that the military-political support from Vietnam, Malaysia, Indonesia and the Philippines, which do not recognize the “XNUMX-dotted line », Mapped by the manual of the Celestial Empire.

Meanwhile, the Global Hawks, Rivet Points, and the latest modifications of the Orions in the near future will no longer be the only means of the US “intelligence triad” that bring discomfort to the objects of our Naval fleet, Aerospace Forces and Ground Forces stationed in close proximity to the coastline of the Baltic, Barents and Black Seas. Back in mid-October 2017, the headquarters of the Northrop Grumman Corporation announced the installation of wings on the airframe of the first serial strategic patrol UAV MQ-4C Triton. This news fully coincided with the plans of Northrop specialists announced in June to prepare the first production vehicles for operational combat readiness by the beginning of 2018. And at the moment they are on schedule. One of the decisive stages of bringing the first naval drones to operational readiness is the installation and configuration of the advanced software "Increment 3.1", which should synchronize with the onboard computer of the drone all onboard radio-electronic equipment (from the updated multifunctional radar and optoelectronic complex to the radiation warning system and navigation system). This only means that the first MQ-4C "Triton" in the coming months can be deployed at numerous air bases in the Asia-Pacific region, the North American continent, Western Asia and Europe. What does this mean in relation to our state?

Naturally, an increase in the number of reconnaissance flights in the immediate vicinity of the main naval bases of the Pacific, Northern, Baltic and Black Sea fleets, as well as on the far approaches to strategically important logistics points, naval bases and coastal air bases in the Eastern Mediterranean and on the Red Sea coast (recall that the end of 2017 was very successful for Moscow in view of the agreement on the use of Russian tactical Egyptian airfields aviation and an invitation to Port Sudan to build a large naval base in the Asia-Pacific region). But the most important point can be considered not even an increase in the number of reconnaissance operations due to the use of new Tritons, but an increase in the duration of flights of each unit and the possibility of new avionics. In particular, according to foreign sources and the resource bastion-karpenko.ru referring to them, the radius of the new drone intended for the US Navy is not the previous 4445 km (like the base RQ-4A), but about 9000 - 11000 km, which is achieved due to the large volume of the fuel system and the wing span increased to 39,9 m; As you know, such a design feature allows you to increase the bearing properties of the airframe and save fuel consumption during flights in the stratosphere. Consequently, only one MQ-4C “Triton” deployed at the Sigonella airbase is capable of not only making several “hooks” at the contact line in the Donbass in one flight, but also later heading into the Baltic sky and spend several hours reconnaissance there in the Kaliningrad exclave and the Leningrad region.

Somewhat apart is the upgraded Triton airborne radar system - AN / ZPY-3 MFAS, which, unlike the AN / ZPY-2 MP-RTIP (Multi-Platform Radar Technology Insertion Program), has additional modes, including the same mode ISAR reverse synthesized aperture, which allows to obtain three-dimensional radar images of not only large frigate / destroyer types NK, but also small missile and patrol boats with a resolution of 1 - 0,5 meters. Achieved are radar images of photographic accuracy, by which one can not only classify a ship with radar off, but also identify it in the most complex meteorological situation. The highest resolution is achieved by aggregating the centimeter X-band operation using a multi-element active phased antenna array. According to information found in American sources, the energy capabilities of MFAS remained at the MP-RTIP level: the officially indicated instrumental range for large sea and land objects is 370 km.

For detecting, tracking and determining the types of moving surface objects, including vehicles, armored vehicles, artillery, small boats and boats, the standard GMTI mode is used, which is also present in conventional waveguide-gap AN-APG-68 (V) 9 radar F -16C Block 52 / +. The key technological advantage of the AN / ZPY-3 radar in comparison with the MP-RTIP is a fundamentally different design of an antenna web reversal electromechanical device, providing an 360-degree full view. This determines the best spatial and tactical flexibility of the Triton.

For example, a drone can begin using an airborne radar at the moment it arrives at a reconnaissance object, when the latter is in the forward hemisphere. For Global Hawk, this patrol configuration is fantastic, since the AN / ZPY-2 radar only turns to the right or left hemisphere due to rotation on the 2 bearing axis with an antenna platform along the longitudinal axis of the aircraft (along the roll): rotate to the object being explored left or right side (in the front and rear hemispheres, 2 dead zones with a sector in 60 ° are formed).

From all of the above, it follows that the MQ-4C "Triton" will turn into a rather annoying tool of multi-band optical and radio intelligence, which will be present at our borders for much longer than the RQ-4A. And given that the MFAS radar is more “sharpened” to work on surface objects, it’s time to think about retrofitting coastal naval facilities and individual warships with modern electronic countermeasures to level all the advantages of an active phased array of Triton radar.

Ctrl Enter
Noticed oshЫbku Highlight text and press. Ctrl + Enter
We are
MiG-31BM vs. ATACMS and the “Global Rapid Impact” tools: is the game worth the candle? The importance of air defense aviationAn-12 in Afghanistan
Military Reviewin Yandex News
Military Reviewin Google News
51 comment
Information
Dear reader, to leave comments on the publication, you must to register.