Russia is not the USSR. It is clear, but we must live on

December 8 2017
344
Yesterday, the whole country was waiting for the voicing of Russia's position on the issue of removal of our team from the Olympics. Someone with understanding. Someone intuitively feeling the abomination of the situation. But everyone was waiting. 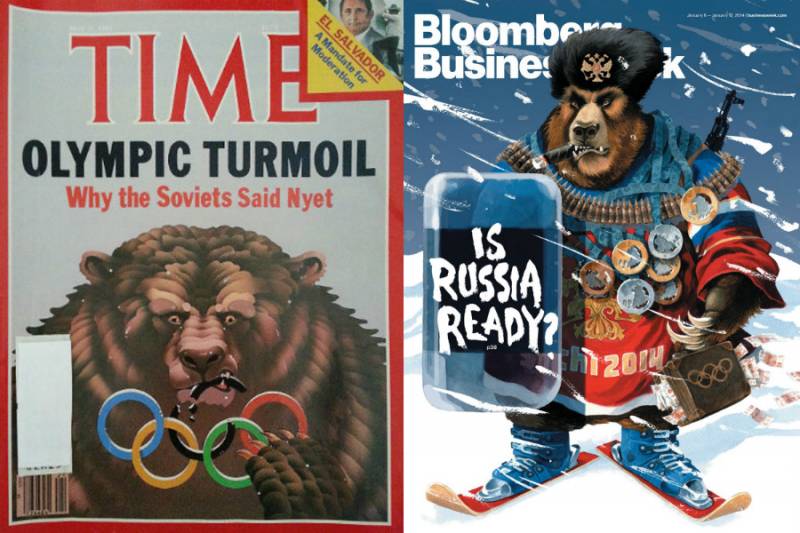 Agree, tell the president at any meeting that we are boycotting not only these games, but also the work of the IOC before the final and evidential trial of the doping scandal not only with Russian athletes, but with everyone, regardless of the country, in Russia there would be a holiday worse than what we saw after the annexation of the Crimea. And pride. Yes, and Putin's popularity would break through the sky and flew into space. Without "Proton". And, perhaps, not only in Russia.

But instead of a clear and unequivocal answer, we heard a vague mutter about the help to those athletes who will go to the games. About "we will do our best to ..."

And who prevented to do this before? You read interviews with leaders of sports federations and leading athletes and you are amazed at one fact. Everyone understood and waited for just such a decision! They waited and hoped for something. For what? At the mercy of the IOC? Did we give up?

Everyone has long understood that the Olympics today are not so much sports as political games. This is sounded hundreds, thousands, and maybe millions of times. And all these beautiful words from the motto of the Olympics long ago turned into just words. Athletes are well aware that today it is impossible to achieve record results without medicine. But to give businessmen money on these games - completely.

We noticed how beautifully the topic of OI on our television screens was replaced by events in Ukraine and Putin’s statement about the possibility of participating in the elections. Oh, my God, is there anyone who doubts the nomination of Putin as a candidate? Or is it true that the Russians, having broken their eyes after sleep, are running to find out what is in Ukraine?

And it looks very simple. Money, money and more money. Someone does not understand why our television magnates cut down on the broadcasts? On advertising and other sweets? What the hell, patriotism, when the grandmothers themselves go into the hands. In the specific hands of a particular person.

But back to joi. The president did not understand his own statement? Someone wrote there, and he voiced? The Russian team under the Russian flag and anthem was not allowed to compete.

What, there was not a single official who read the provision on the admission of athletes under the Olympic flag? But there everything is concrete. Without discrepancies. The athlete must either be stateless or represent an unrecognized state, or a political emigrant. Everything!

Some of our athletes can not act under the Russian flag for political reasons? Or in our country there is the status of "non-citizen", as in the Baltic States? And what's left? It turns out that we are an unrecognized state? And the president of Russia indirectly recognizes this.

Once, in 1980, one great country refused to participate in the Olympics for political reasons. Do not hide it. Without making a sad face. Not playing a hurt child. And what sanctions followed from the IOC for this great country? None Nothing happened to the IOC. Wrapped and continued to work.

In 1984, another great country spat on OI. In the same way openly expressing everything that she considered necessary. And what sanctions followed for this country? Again, the IOC has flown around and continued to work. Moreover, both great countries have become even more authoritative.

Just because they were great countries. They did not “bubble” from their greatness, but simply were great. And they put in place all the officials of international public organizations.

But today it is impossible to compare Russia and the USSR. These are really two big differences. Different diplomacy, different sports, different elites.

Recall that the sport in the USSR was not politicized. Yes, it was a political demonstration, but it was based on mass popular sport. Many will remember now how coaches from sports schools and sections came to regular schools and agitated children. It was? It was.

And it is worth remembering what "denzhischi" had to fall off. And people were really healthy and really engaged, if not in sports, then in physical exercise. And it was from whom to choose frames for teams. And there were results.

What greatness can we talk about today? In a country where the Minister of Sport does not care about sports at all. His task is to report on the implementation of the plan. They participated there, brought so much gold, silver and bronze.

All these jumps and grimaces are no more than attempts by elites to prove their worth. At least the number of medals. And from here the desire of athletes even stuffed, even carcass, but to get to the Olympics.

In the USSR, athletes were not considered professionals. And in Russia - completely. To grow an athlete today, you need to invest in it. Since childhood. What should investments do? That's right, pay off at least. And make a profit. Both investors and athlete.

Let me compare. In the Russian Empire there were serf theaters, where serfs delighted landowners. And even toured. Today, of course, there is no serfdom, but the similarity with dependence on title sponsors can be traced. Banks, oil and gas companies, industrial holdings. Financial elite.

Hence the desire to please the owner and work out the money invested. Complete addiction. Independent so far already drawn two people: Gazzaev and Ovechkin. Here is a low bow to Ovechkin for his words, especially since it is unlikely that anyone will blame him for the lack of desire or motivation to play for the national team.

The rest must go. Need money. Well, and a bonus patriotic handout in the form of keys to the domestic car "Audi". Or Mercedes.

It is interesting to ask the same Larisa Semyonovna Latynina, did she, when she squeezed her 18 Olympic awards, did she think about prize money or about Mercedes?

Country once again smacked on Sopatka. Expected. I do not understand why the officials are so surprised at this, as if there was no disgrace in Brazil.

As well as it is not clear where all the same response? Where is the reaction of a great country whose leadership raises a wall to protect its citizens?

Apparently, the understanding that Russia is a great country is present only in our heads. Or those who need gas and oil cheaper. Or a multi-billion dollar loan to forgive.

The rest is all. And to change my mind with the construction of the gas pipeline, to bring down the plane, to derail the flag, and to throw diplomats out of the buildings, pick up and take out the archives.

Yes of course. Not great countries there prefer to just bomb. Or capture like Panama. So yes, we are great.

“Bread and circuses!” The motto is as relevant as ever, despite the millennial age.

Especially spectacles are needed when with bread sucks. With him, nothing yet, but let's see what the government's New Year's gifts will look like in terms of excise and other jokes. The crisis seems to be over, in the country deflation means a lot of money from the population. Need to withdraw.

And withdrawn, here, thank God, all filled their hands. Following the fuel expectedly all will increase. Checked already.

So, it is necessary spectacles. Here you and OI, here you and the World Cup. Have fun, people!

Have fun. At the screens. Maybe in terms of World Cup and burn out something. Not here, our football players who are fattened by unreasonable labor on the consumption of fees will show the same class as before.

Thank you, gentlemen. Especially Mutko and Zhukov. You are our guardians, what would we do without you.

I wonder what Mutko is connected with Putin? Also in one section on the fight went? Or, like Serdyukov, in Medvedev's relatives? Nothing else can explain the presence of Mutko against the background of the degrading results of domestic sports. The failed Olympiads, the failed championships, the utterly inaction in the doping scandal.

And he is not alone in terms of shows.

Here it is worth remembering Mr. Medina. All the multifaceted activities of our Minister of Culture has been reduced to the distribution of grants to theaters and directors. They put on "great" performances, make "great" films - so what? Is there at least one who, apart from his “greatness”, “discouraged” the funds invested in it? The West recognizes our contribution to world culture. Handsomely. But the residents of Norilsk somehow do not really recognize. And the people of Yamburg too. They did not see these "world masterpieces".

The ministers of what they are not interested at all. But the list goes on. Almost the entire cabinet. And we promise that we will continue.

And where is the chieftain of this very Cabinet? Why do such people feel comfortable in his government? Or do the “strategic decisions” that he makes on a daily basis make it difficult to look at the “tactical issues” of life?

And everyone is happy with everything. The president is satisfied with the prime minister appointed by him. The premiere suit ministers. And further along the chain.

In short, be glorified, Fatherland ...

Or maybe you should think? Should change the fate? And think about the fact that I would like to live really in Great Russia.

It is clear that 2018 year is already lost in all senses. Bread, circuses, elections ... But life does not end there, and it is worth looking further. In 2024 year.

Everyone knows that under a rolling stone water does not flow. Axiom. And if further develop this thought? The water wears the recumbent stone and turns it into sand. Today we are "lying" and talk about our greatness. About our victories and the ability to respond to any aggressor. And the water wears away ... And the rockets fall ... And we will not hear the hymn of Russia at the Olympics. And maybe the flag as a handout at the closure will be allowed to carry ...

We will survive somehow. We have such a fate - to worry. Others have the fate to live, and we have to worry.

But if now the stone does not move, then soon the sand from the place where he once lay, just wash away with a stream of water ...

Ctrl Enter
Noticed oshЫbku Highlight text and press. Ctrl + Enter
We are
Results of the week. "Everything! Kina will not be! Electricity is over! ”Reports from the militia of New Russia for 27-28 September 2014 of the year
Military Reviewin Yandex News
Military Reviewin Google News
344 comments
Information
Dear reader, to leave comments on the publication, you must to register.