December 9 - Day of the Heroes of the Fatherland in Russia

December 9 2017
6
In February, the 2007 of the year on the basis of the federal law No. 22 No. “On Amending the Article 1-1 of the Federal Law“ On Days of Military Glory and Memorable Dates of Russia ”in the national holiday calendar became one more important date. We are talking about such a date as December 9, which is officially called the Day of the Heroes of the Fatherland.


The hero of the Fatherland in the usual sense - a military man who accomplished the feat in battle, and often laid down his head in the name of the Fatherland. Alexander Matrosov during the Great Patriotic War, another Alexander - Prokhorenko - in our time - in the Syrian Arab Republic. 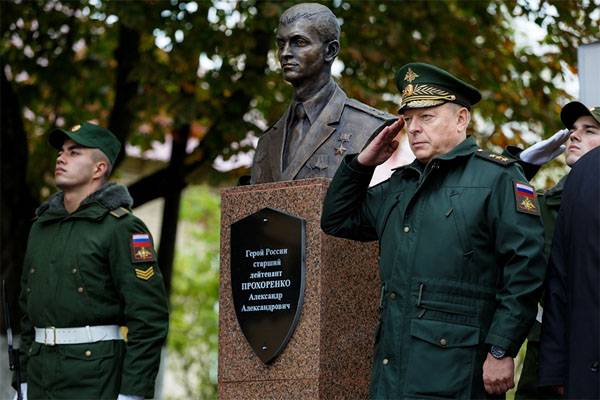 Representatives of the partisan detachments, the Soviet underground in the territories occupied by the Nazis, as well as famous pilots, legendary tankers who caused enormous damage to the Nazi invaders. Battle of Moscow, for Stalingrad, the Kursk Bulge, the liberation of Ukraine, Belarus, the Baltic States, Poland, the capture of Berlin. Here they are - real heroes - people who have made a truly invaluable contribution to the common Victory with their courage and faith in themselves.

But after all, the Heroes of the Fatherland are not only those who wear shoulder straps. Recently, in the information space of the country, extremely rarely attention is paid to the fact that it is worthy of being called a real hero by his work and civilian work.

Have we seen much lately on the central TV channels of documentary plots, artistic films about the working man, scientists who contribute to the development of the country, those who save people, who give hope to the desperate, build shelters for the homeless at their own expense. The answer is unlikely to be positive, because the country managed to get used to the fact that everyone is ruled by the notorious rating. That is why the “heroes of the Fatherland” on the screens today are drunken faces that appear on all sorts of “horror talk” and other programs of the same kind, talking about their “hard fate” when the house has nowhere to go from emptied bottles. This is fed to us, and the majority is forced to watch - after all, "prime time" - sit and rest in front of the "box". Sit-look. We rest.

At this time, somewhere in a god-forgotten village in the frost under 30, a medical assistant and an ambulance driver on a snowy road are trying to repair a car that has already been wrapped half a million kilometers away - in time to save a person. And the car goes further - through the cold and snowstorm. And they save a person. Is it not Heroes of the Fatherland? Of course, heroes. Thank you for your work!

An athlete who received a paper on the non-admission to the Olympic Games only because he was a Russian athlete, and who sent a telegram to the IOC by mail with words about where he saw the IOC and his offers to perform under a white rag. Is not worthy of respect? Worthy This is a person who understands that in addition to his own benefit, there is also honor and dignity. Just - honor, and just - dignity. And the country that made him an athlete. There is a flag, a coat of arms and an anthem, to disown from which means to become a puppet in the hands of those who are trying to spoil Russia. Not a hero? In today's conditions - a true hero. Thank you for courage! I would like to hope that among the athletes there will be one.

Isn't it possible to call the Voronezh teacher of English language a hero of the Fatherland, who for years 7 absolutely free of charge teaches children from the temporary detention center educational discipline. 7 yo! Is free! Simply - at the call of the soul, to help those who find themselves in a difficult life situation. Those who are deprived of the opportunity to study in a regular school are not without their own sin, of course. And she works — she does not care about rewards, fees, or whether or not to give up all this social work to such and such a mother. And why everything is without a name and without a name. This man is Elena Nikitina. With all my heart, thanks for the work!

These are the heroes of the Fatherland "from the plow" - filling the bins with bread, ensuring the food security of millions of Russians who did not abandon agriculture even in the failed nineties. Thank you for the work!

On the Day of the Heroes of the Fatherland, sincere gratitude to all those who are in uniform and with the Star of the Hero on their chests, and to all those for whom civil heroism is not an empty sound!

Ctrl Enter
Noticed oshЫbku Highlight text and press. Ctrl + Enter
We are
In Orenburg, opened a monument to the hero of Russia who died in Syria ProkhorenkoDay of partisans and underground fighters
Military Reviewin Yandex News
Military Reviewin Google News
6 comments
Information
Dear reader, to leave comments on the publication, you must to register.