Golden calf above the Kremlin 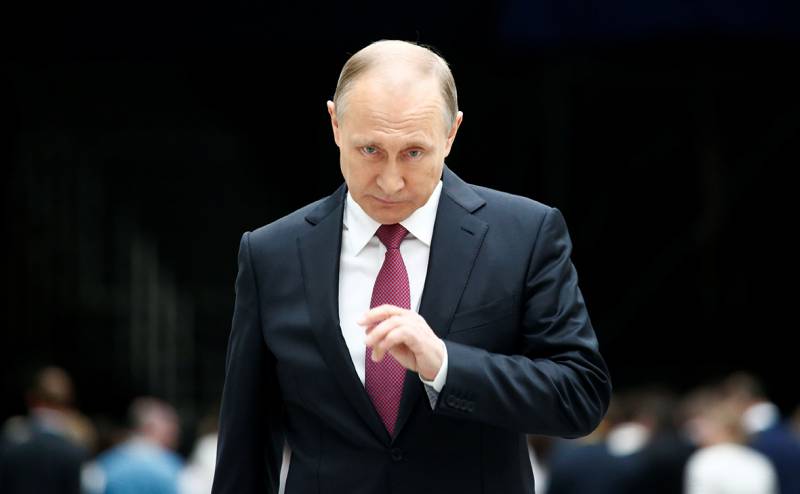 What was the reason for such a long pause? Questions to Putin about whether he will go to the polls have been asked repeatedly, but the president has kept a significant silence.

It was probably a difficult decision. In fact, being in power for eighteen years, it would be time to think about changing the scope of its activities. Yes, not so simple. The king is dancing retinue.

With the collapse of the Soviet Union, a new elite appeared in Russia. Having learned the taste of money and absolute power, she does not want to part with it. With unlimited funds, our new elite rushed to conquer the world. It turned out that the world is not waiting for her. The newly minted rich people clearly indicated the boundaries of their capabilities. Buy houses, teach children, and that's it. For the rest of the world elite, you are no one to call you. Your country is under external control. You will behave incorrectly, we will take away your riches, it is time to spit.

And here our elitushka became thoughtful. Yeltsin, who was in power, could not help. It became clear that without a strong state that has weight on the world stage, our rich will always be pariahs for the rest of the world. They thought, thought, and changed the president.

Of course, Putin does not take away what he has done for the country, and no one detracts from his successes. Russia really returned to the club of leading powers. But all this is not for the country, as such, and not for you and me, the common people. Everything is done for the prosperity and self-satisfaction of our ruling elite.

Why did we go to war in Syria? To protect Assad or preserve its territorial integrity? No matter how wrong! Through Syria, it was supposed to stretch the gas pipeline from Qatar to Western Europe, and this is a huge loss of our gas lobby. Why climbed to Ukraine? A threat to the geopolitical position of our country or a loss for business and gas supplies to Western Europe? Who supplies Ukraine with diesel fuel and buys real estate on the cheap? The answers are obvious. What is the greatness of the country, it's just a business.

Seventy percent of people in the Russian Federation do not live, but survive. Salaries in the public sector do not hold water. There is no work. People are impoverished. And our prime minister is broadcasting how wonderful and wonderful everything is. The ruling class (yes, yes, it already exists) is terribly far from the majority of the Russian people.

They simply do not imagine the life of ordinary people. This was colorfully told to us by the former Minister Ulyukayev in his last word (I recommend reading). I remember the times of the castling of Medvedev’s power on Putin. Nashe Radio conducts a live poll. “Would you like Medvedev to become mayor of your city?” A resident of Sterlitamak said that Mr. Medvedev does not understand anything in the management of the city and will ruin everything, he is a cabinet lawyer, so let him sit as prime minister.

In the Soviet Union there were a lot of remarkable achievements and decisions. Unfortunately, building a power vertical, our rulers take the worst. We sat Kremlin elders to the grave as Secretary General, and we will do the same. And what if a new “king” chases us with a filthy broom, because he has his own lures, no, let ours be sitting. There were all the officials on the hook of the party and the KGB, and ours will be. Only we are more cunning. We will build legislation so that, without violating it, the official will not be able to perform his functional duties and due to this he is always on the hook. Let us confuse the law to such an extent that anyone can be both justified and imprisoned. Not for nothing all the municipal authorities rushed to arrange between themselves and the real activity various laying in the form of offices, and after them the real municipal enterprises and other structures. At the municipal level, an incredible number of various exaggerated events, parades, celebrations, holidays are held and bravura reports, reports, reports are sent to the top. There is no real activity at any level of government. Everywhere the presentation of wonderful performance and achievements. What this led the Soviet Union to, everyone remembers very well.

The country does not mind that V. V. Putin will go on to his next term in office. Because, unfortunately, there are no real competitors.

How to convey to our government what is actually happening? How to make so that the power of professing the golden calf, turned to people? Maybe, just no one will go to these elections? And then at least something will change in the minds of our new boyars.

Ctrl Enter
Noticed oshЫbku Highlight text and press. Ctrl + Enter
We are
Interview of V. Putin to Channel One and the Associated Press AgencyWhat you didn't want to know about England
169 comments
Information
Dear reader, to leave comments on the publication, you must to register.