"Product 30" went to the flight

December 8 2017
84
The Russian defense industry continues to work on a promising fifth-generation fighter Su-57 / T-50 / PAK FA. At the moment, the program is addressing a number of tasks related to the creation of a particular equipment, as well as new weapons. One of the main goals at present is to test the new engine “Product 30”. The project of a promising engine has already passed a number of important stages, and now the power plant is ready for testing along with the aircraft. The other day, the first test flight of the Su-57 prototype with the engines “Item 30” took place.


From 2010 to the present, experimental machines of the “Perspective aviation Frontline Aviation Complex ”T-50, now known as Su-57, used AL-41F1 turbojet engines. In the context of the entire program, they also bore the symbol “first stage engines”. These products, built according to the double-circuit scheme, equipped with an afterburner and a nozzle with thrust vector control, allowed the aircraft to obtain the desired capabilities and significantly improved performance in comparison with existing equipment. In parallel, the development of a completely new engine with the working name "Product 30" was underway. He was also called the engine of the second stage. 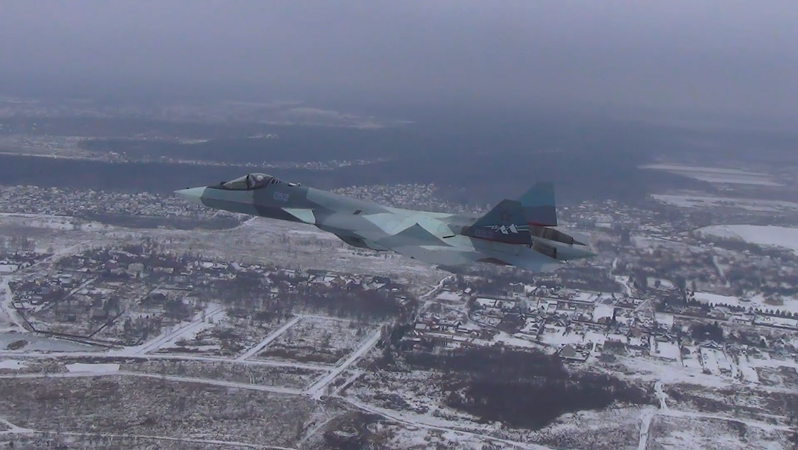 The design and development of the second stage engine took several years. According to known data, over the past few months, experienced "Products 30" were tested on the stand. To date, the engines of the new type have been prepared for the full test with the carrier. The first flight of a prototype aircraft with prototypes of the new model engines took place a few days ago.

The fifth-generation Su-57 fighter with the 052 tail number (the second flight model of its type) equipped with the 30 Product engine made its first flight last Wednesday, December 6. For security reasons, the aircraft was equipped with a mixed power plant in the form of the engines AL-41Ф1 and "Products 30". The first such tests were conducted at the airport of the Flight Research Center named after MM. Gromov in the city of Zhukovsky, Moscow Region. The pilot of the company “Sukhoi”, the hero of Russia Sergey Bogdan, controlled the experimental machine with a new power plant.

For obvious reasons, the project developers and testers did not disclose most of the information on the first test flight and limited themselves to a few general information. According to official data, the first flight using the “30 Product” lasted 17 minutes. During this time, an experienced T-50 under the control of a test pilot performed a flight mission. The flight went smoothly and in accordance with the received task. Soon the aviation industry published photos and videos of the first test flight of the vehicle in a new configuration.

The engine project "Product 30" is still far enough from the beginning of mass production and operation of equipment in the army, but already now it receives the highest marks. So, commenting on the project of the PAK FA and the new engine for such an aircraft, the Minister of Industry and Trade Denis Manturov noted that the new aircraft are evidence of the high potential of the domestic aircraft industry. The industry has proven its ability to create highly intelligent advanced systems such as a unique glider, innovative digital equipment and the latest engines.

The start of the flight tests of the new engine “Product 30” is the most important milestone in stories domestic engine building. The fact is that for the first time in many years the turbojet engine for a combat aircraft was developed from scratch and should not have become another option for the deep modernization of one of the existing samples. In fact, the "30 Product" was the first full-fledged development of a kind in the modern history of the domestic industry. In this case, the uniqueness of the project is not only in the approaches to design. The refusal to use ready-made base projects allowed us to apply new ideas and solutions, significantly affecting the final characteristics and capabilities.

According to previously published data, the new “Product 30” was created in the framework of the cooperation of several enterprises from the United Engine Corporation. This organization of work has allowed a number of leading organizations in the industry to combine efforts and use their best practices. The project used the newest ideas and constructive and technological solutions. The correct combination of promising and well-known solutions led to the desired results.

Unfortunately, most of the information about the turbojet "Product 30" is not subject to disclosure. However, the main features of the design and the characteristic advantages of the new design have already been announced. Allegedly, one of the ways to improve performance was the use of new materials and architectures of individual units. In particular, the engine received a brand new high-pressure compressor. Several innovations have been introduced into the design of the turbine. First of all, new high-temperature nickel alloys were used in its details.

A more efficient compressor and turbine combined with other innovations, such as the new electronic control system, gave the 30 Product engine certain advantages over existing products. Previously, it was repeatedly stated that the main advantages of the new engine will be reduced fuel consumption with increased thrust. In addition, the engine is equipped with a nozzle with a thrust vector control system, which allows you to dramatically increase the maneuverability of the aircraft.

As you know, one of the signs of the fifth generation fighter is the ability to fly at supersonic speed without using an afterburner. According to known data, the engines of the first stage for the PAK-FA - AL-41Ф1 - have already provided such opportunities. The new "Product 30", differing in higher technical characteristics, will allow to solve such problems with greater efficiency, including with reduced fuel consumption.

The exact characteristics of the new engine has not yet been officially published. So far, only various estimates are made, based on the available information about existing engines of domestic development. The maximum “30 Products” without use is estimated at 10-11 thousand kgf. Fast and Furious should reach 16-18 thou. Kgf. Such estimates are based primarily on the assumption that the engine of the second stage should have noticeable advantages over existing products.

From these estimates, it follows that the thrust of two new-engine engines working in the afterburner should, at least by 10-15%, exceed the normal take-off weight of the aircraft. With a maximum take-off weight, the thrust-carrying capacity must also be greater than one, although its stock in this case can seriously decrease. However, in this situation, some reduction in thrust-to-weight ratio is offset by an increase in the stock of fuel and ammunition.

The Su-57 / T-50 fighter with engines of the first stage already had the possibility of more vigorous maneuvering due to the thrust vector control system built on the basis of controlled nozzles. The 30 engine is also reportedly equipped with jet-jet controls, which means the aircraft retains its capabilities in the context of maneuverability while increasing other flight data.

Starting flights with a new engine is an important step in the history of the entire PAK FA program. It brings the moment of successful completion of work, however, to obtain the desired results far enough. So far, only one “30 Product” is being tested on a carrier plane. In the near future, flights will have to start with a full-fledged power plant consisting of two engines. T-50 tests with two engines are scheduled for next year.

According to previously published plans, the flight tests of the engine of the second stage were to start in 2017 year and continue for two years. By the end of the decade, the military and industry intended to complete the refinement of the “30 Products”, according to the results of which the new engine could be put into series. As the last show news, the PAK FA program is on schedule. As planned, the first flight with the new engine took place in the 2017 year, which will allow the fighter to be raised in the final configuration next year.

Whether the participants of the PAK FA program will be able to meet the deadlines will be clear in the near future. To date, they have been able to implement a number of stages of the program and the entire course of the latter, in general, may be a reason for optimism. There is no reason to doubt the possibility of successful completion of work on time.

This summer, the command of the aerospace forces and the leadership of the aircraft industry announced plans for the near future, affecting the mass production and supply of Su-57 fighter jets. It is alleged that in 2018-19 the army will receive an installation batch of 12 such machines. 10 aircraft from 12, intended for trial operation, will receive the engines of the first stage - AL-41Ф1. Two other machines will have to match the appearance of the serial fighter. Apparently, the words about the serial appearance implied including the engines "Product 30".

It should be noted that a significant number of new projects are being developed in the framework of the PAK FA program, and new ideas are being implemented not only in the field of power plants. At present, work is continuing on new radio-electronic systems, the development of various aviation weapons, and so on. As in the case of the 30 product project, work in these areas will have to be completed in the coming years, as a result of which troops will be able to get full-fledged full-service warplanes provided for by the existing project.

Recently, reports about various jobs and successes of the program “Advanced Aviation Complex of Frontal Aviation” have appeared with enviable regularity. In addition, these deadlines are approaching the completion of development work and the commencement of mass production for the supply of equipment to the armed forces. The beginning of the tests of the prototype T-50 / Su-57 with the new engine touches on key aspects of the entire program, and therefore is one of the main recent news.

The aviation industry continues fine-tuning a promising fifth-generation fighter and regularly reports on its successes in this matter. The latest news on the start of tests of the prototype Su-57 with the new engine "30 Product" continues this remarkable tradition and, of course, turn out to be a new reason for pride and optimism.

Ctrl Enter
Noticed oshЫbku Highlight text and press. Ctrl + Enter
We are
An-12 in AfghanistanMedia: Putin vainly admired the T-50 fighter - he was shown the plane with the old stuffing
Military Reviewin Yandex News
Military Reviewin Google News
84 comments
Information
Dear reader, to leave comments on the publication, you must to register.