The first is poisonous. Part of 1. Chlorine hurricane

December 14 2017
19
We previously wrote about the feat of the defenders of the heroic Osovets, July 24 1915, reflecting the gas attack of the enemy (10 facts about "Attack of the Dead"). But a little earlier, the Russian soldiers carried out another collective feat — near the Volga Shidlovskaya 18 in May 1915, when the powerful gas-cylinder attack of the Germans was reflected on the 12 – kilometer section of the front. Moreover, the situation for the Russian troops was aggravated by the factor of technical surprise - the events of 18 in May were the first case of the use of chemical weapons on the Russian front of the First World War. And after the enemy’s gas launch, 9 infantry attacks were carried out - all in one day.


The object for the first gas balloon attack on the Russian front was part of the Russian 2 Army, which had blocked 1914 to Warsaw in the fall with the breast of the Germans. The tactically so-called Bolimov sector, in which the attack took place, led the attackers to the shortest highway route to Warsaw - without forcing the r. Ravka. The leading enemy trenches in the Bolimov sector were on the right bank of the r. Ravki. There was no water between the contiguous advanced trenches of the enemies of the water, the terrain was relatively flat and open. For the gas attack, the Bolimov sector was also convenient in that, thanks to the convex arc to the Russian side, the enemy had the opportunity to use the north-west, west and south-west winds for the gas passage. 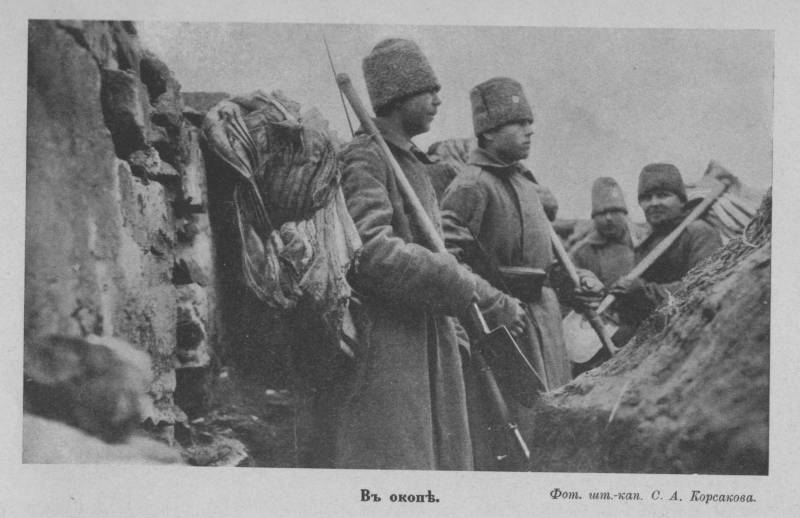 1. The great war in the images and paintings. 10 release. From the author's library.

But the Russian troops had a fairly tight defense, occupied by the 14-th Siberian rifle and 55-th infantry divisions.
The 55 Infantry Division occupied the following positions.
The right combat area was defended: the 217 Infantry Infantry Kovrov and the 218 Infantry Corps Gorbatovsky Regiments and the 1 Division of the 55 Artillery Brigade. The task of the parts: stubbornly defend the position plot from the height 45,8 - Folv. Constance - Folv. Mogely. Left combat area: 220 th Infantry Skopinsky regiment with attached 31 th, 32 th and 36 th militia and 2 division 55 th artillery. Objective: persistently defend the site from folv. Mogely to r. Ship, to the south with. Grabbe. The division also included a naval battery 47-mm guns and 3 fortress batteries: 1-I and 2-I Warsaw and Novoorgievskaya. In the corps reserve was 219-th Kotelnichesky regiment. 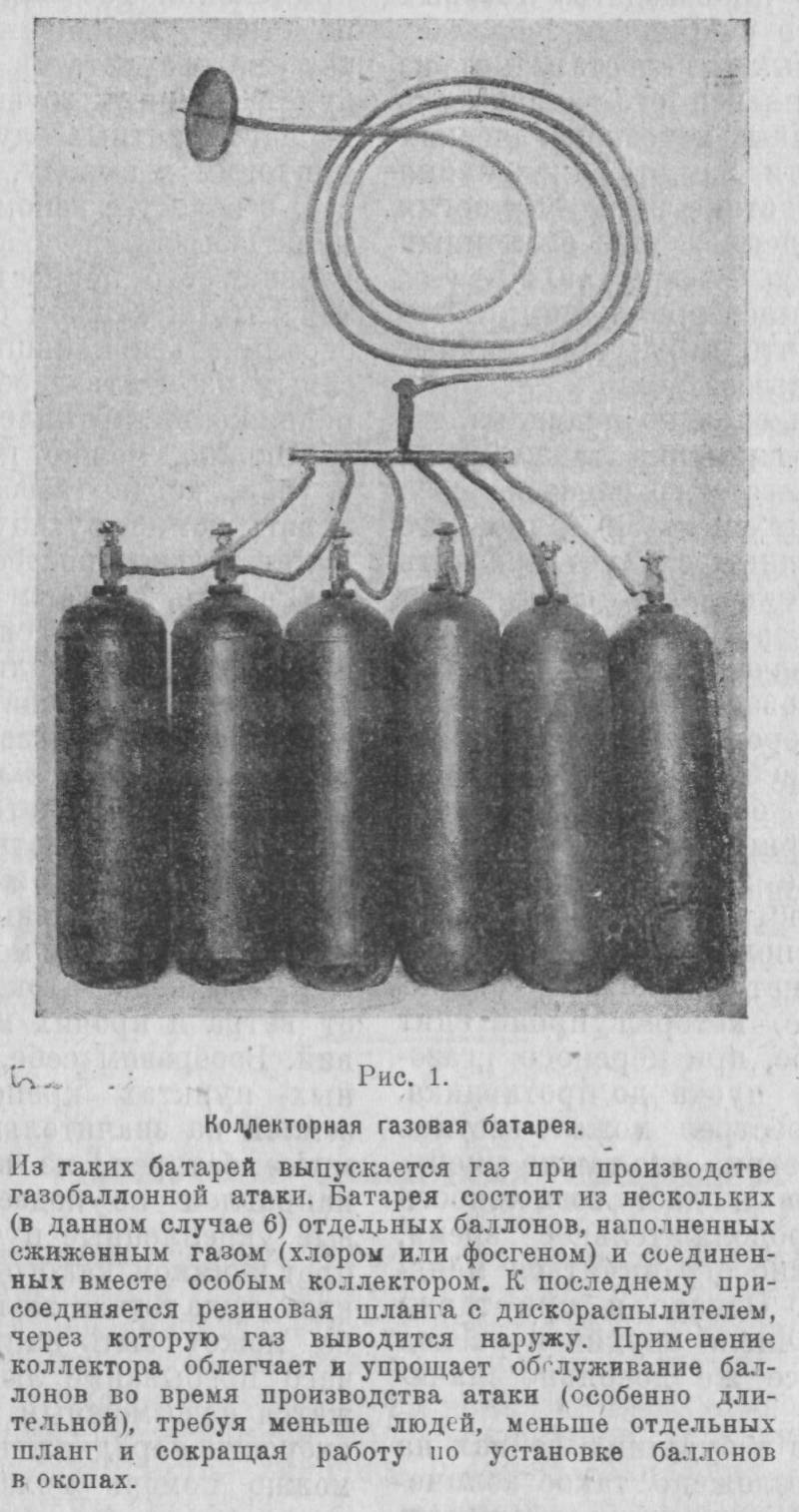 The undoubted advantage of the gas balloon method of conducting a chemical attack should recognize the possibility in a short time, with the help of simple manipulations, to obtain a "gas cloud" of considerable power. For the formation of a "gas cloud" of the same concentration and size through the use of chemical projectiles, it would be necessary to concentrate a large number of artillery and resort to a huge expenditure of projectiles. However, during the firing of chemical shells, a “gas cloud” is created directly at the enemy’s location, and there is no loss of gas concentration (unlike the cloud, which gradually moves from its own position to enemy positions during a balloon channel, gradually capturing more and more terrain - and the concentration drops) . The disadvantage of the gas-balloon method is a large dependence on meteorological and topographical conditions. But its use made it possible to hit the enemy’s positions to a greater depth.

The design of the gas cylinder was quite simple. The siphon tube connected to the valve reached almost to the bottom of the container. When the valve was opened, a small amount of chlorine gas inside the cylinder put pressure on the liquid column and expelled the liquid chlorine to the outside — and in the air it immediately turned into gas.

When installing gas cylinders connected to 20 units in the so-called "gas batteries". For each kilometer of the front relied on 50 of such batteries or 1000 cylinders (20000 kg of gas). Cylinders were buried to the neck at the bottom of the trenches - at the stingray facing the enemy, covering the heads sticking out with earth. Thus, the cylinders did not attract attention even in the case of the search for enemy patrols. Installation of equipment required a lot of time.

Before the gas attack, their own infantry was relegated to the second line. In the front trench there were, besides the fighters of chemical units, only machine gunners and sentinel. A lead tube with a length of several meters was screwed to the outlet valve of each cylinder, which was discharged through the parapet and laid with earth, stones or sandbags. This work required careful execution - if the pipes were bent, then the gas got into its own trenches. At the corresponding signal, all cylinders intended for this gas wave were opened. Over time, the number of gas waves increased significantly - up to 7 and more. The depth of the cloud depended on the duration of the gas launch and wind speed. The cloud concentration was the higher, the shorter the start-up time, the lower the wind speed and the greater the number of empty cylinders at one time.

Initially, only chlorine was used for gas cylinder blows. But soon he was replaced by a mixture of chlorine with phosgene (sometimes the proportion of phosgene reached 60%) and chloropicrin. The ability to use the mixture depended significantly on the time of year. For example, in winter, a mixture with a high content of phosgene was unsuitable (in a frost, phosgene mixed with chlorine turned into gas very slowly). The Germans tried to eliminate this inconvenience by the fact that during some of their attacks they released phosgene from special cylinders using gas with a low boiling point - and clouds of chlorine and phosgene were mixed in the air.

The use of a gas-balloon method often led to larger-scale results (while the fire with chemical shells was of a point-like nature and was intended to hit artillery positions, communications centers, command posts, etc.). Often, both methods were used in the complex. The gas cylinder method as the dominant was indispensable when attacking fortified areas (for example, a blow to the Osovets fortress on July 24 1915).

The use of chemical weapons by Ypres, which took place a month earlier, was not fully taken into account. Information about the possibility of a gas attack from the enemy was absent. Observation of the German trenches failed to reveal the preparation for the attack — and for the troops of the 14 Siberian Rifle and 55 Infantry Divisions it came as a complete surprise. Only the following fact could guard: the 16 of May was observed that in the near rear of the enemy (from the Skierniewitz Forest to the Bolims) in the 17 hours of the 30 minutes 9 drove large tarpaulin-covered vehicles — each cart had a harness in 6 horses.

Known about the April gas attack of the Germans at Ypres, the Russian command tried to respond to the emergence of a new enemy weapon. The command of the 55 Infantry Division, on its own initiative, ordered gas masks in Moscow and dispatched a receiver. But the gas masks, ironically, were delivered to the 55 Infantry Division ... in the evening of May 18.

18 May in 3 hours 20 minutes after a short fire (10 shells) from 105-mm guns of the combat section of the 55 Infantry Division, the enemy released chlorine. 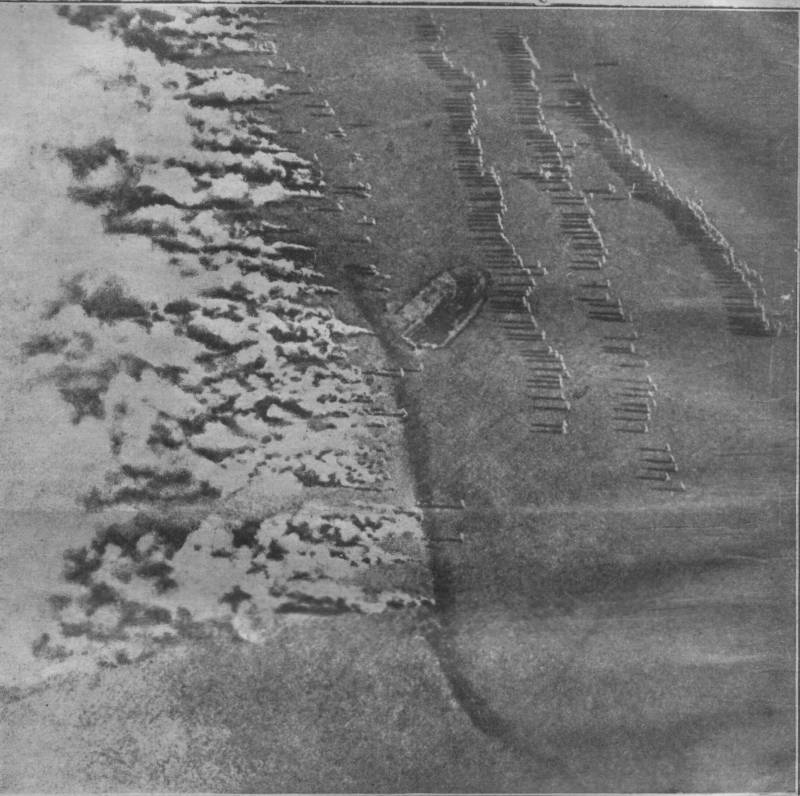 Before the enemy's trenches - on the front of Volya Shidlovskaya - Maidan-Bolimovskiy, a greenish smoke (cloud) appeared, which, thanks to the wind blowing from the west, began to approach the Russian positions.

At the same time, a hurricane rifle-and-machine-gun fire on the Russian advanced trenches and a powerful artillery fire on the positions of the 14 Siberian Rifle Division were opened.

A complete tactical surprise (the Russian soldiers who did not know the gas attacks showed more surprise and curiosity than anxiety) cost the defenders dear. Having taken a gas cloud of gas for a smoke screen familiar to the troops, masking an infantry attack, the Russian troops in the advanced trenches were reinforced, and reserves were tightened.

Having reached the trenches, the suffocating gases began to spill over them, causing the fighters of the 217-th Kovrov and 218-th Gorbatovsky regiments to faint, causing dizziness, coughing and vomiting. Considering such a state as temporary and preparing for an attack, the troops continued to remain in the trenches of the first line. And soon the labyrinths of the trenches were filled with corpses and dying. By the 4 watch 30 minutes the chlorine reached Oryshev. 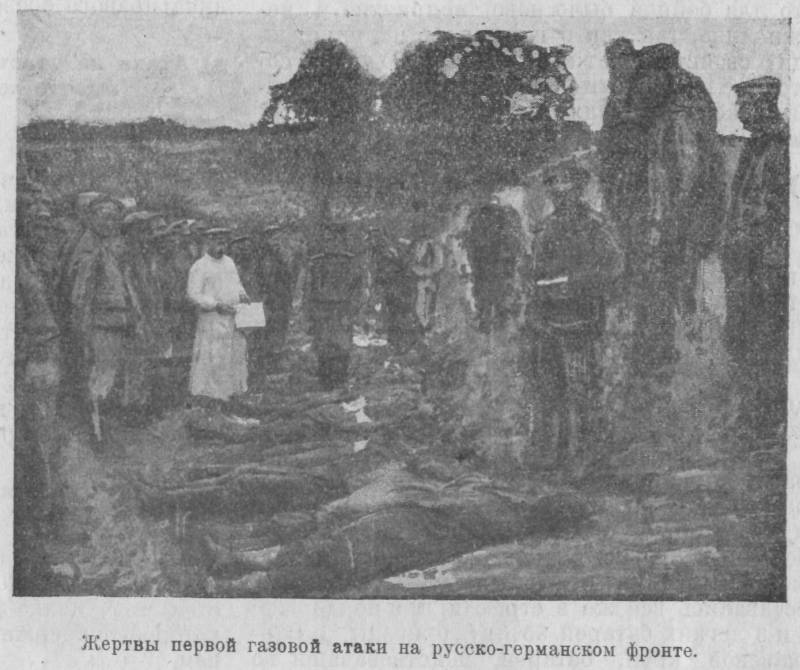 Ctrl Enter
Noticed oshЫbku Highlight text and press. Ctrl + Enter
We are
Weekly summary (30 January-5 February) on the military and social situation in the DPR from the military officer "Mag"Reports from the militia of New Russia for 4-5 of October 2014 of the year
Military Reviewin Yandex News
Military Reviewin Google News
19 comments
Information
Dear reader, to leave comments on the publication, you must to register.