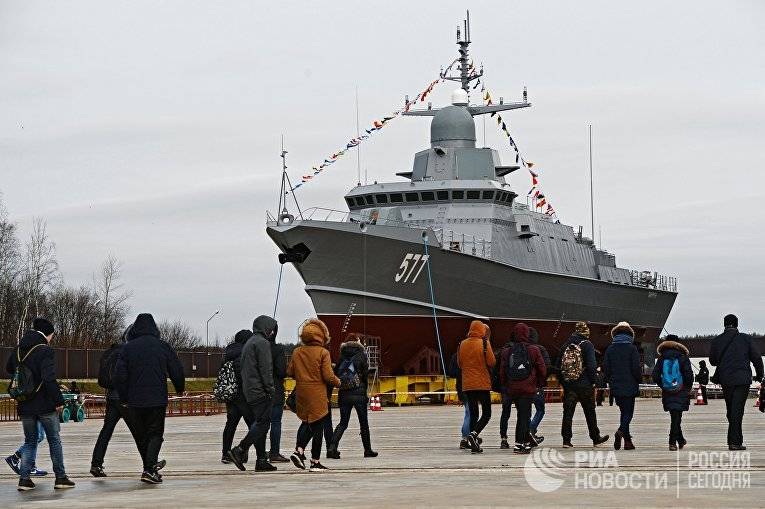 Small, but very effective and, like his spider-model, in case of emergency - deadly, the new Russian rocket ship will have to protect the shores of the Putin empire in the future.

A few days ago, the second warship of the new class, Karakurt, was solemnly launched into St. Petersburg to the delight of the Russian military and their supreme commander and President Vladimir Putin.

Estimated area of ​​application of new ships: the Black Sea - as well as the Baltic Sea coast near Kaliningrad, the former Königsberg, which, from the point of view of NATO, may already present an additional threat because of its close proximity to Poland and the Baltic States.

From the point of view of experts, the ultra-modern warship (project 22800) has no analogues: the size of a corvette, speed - like a destroyer, firepower - like a heavy cruiser, invisibility of a submarine. In addition, the relatively cheap ships of the 22800 "Karakurt" project, by the way, should cause NATO to have a sense of alarm.

These universal corvettes with their ballistic missiles for sea and land targets pose a constant danger not only for coastal cities, but even for large warships and aircraft carriers.

Because of their “invisible cap” properties, they are a target that is difficult to detect and therefore almost impossible to destroy.

In 2015, the order was given for the construction of corvettes

Officially, the creation of the "Black Wolf", as you can also translate the word "Karakurt", was announced in the summer of 2015. The stated goal: smaller and more maneuverable, but equally efficient ships for operations both near the coast and on the high seas - with the appropriate armament.

"The development is going towards the creation of universal long-range missiles that can be used both against targets onshore, and at sea and on land," said the then head of the Russian naval fleet Victor Chirkov (58).

Back in December, the first two ships of the ambitious project 22800 were laid at the Pella shipyard in St. Petersburg with the Hurricane and Typhoon. According to the original plans, at least one of these ships should be transferred to the Russian Navy back in the 2017 year.

In order for their big names to justify themselves, these ships, all of which are 65 meters long and 10 meters wide (the displacement of all 800 tons), are equipped with the best military equipment:

NATO Secretary General Jens Stoltenberg at the NATO Summit in Warsaw
On the ground, on the water and on the Internet: NATO increases readiness for Russian aggression
Українська правда11.11.2017
Russian ships - hypersonic rockets
War is Boring16.10.2017
Kick "Calibrami"
Sanaxnumx
Russia is preparing ships for sabotage at sea
Defence2420.12.2016

Thus, every enemy ship within 500 radius of kilometers around "Karakurt" is in danger. Ground targets can be as far as 2500 kilometers.

At the same time, it takes less than a year to build one corvette, and the costs are much lower than building a large warship.

However, in combat qualities, they are only slightly inferior to large warships:

With a cruising range of up to 3000 nautical miles and a cruising speed of approximately 30 nodes (Russian diesel-electric engines), the corvette can not only be in autonomous navigation for 15 days, but also instantly attack and disappear just as quickly.

The fear of the Western military is not only the frightening ability of the corvette to strike and disappear (Hit and run), especially when they act as a whole compound.

Another ship class "Buyan-M", the predecessor of the corvettes, was considered stronger than any US ship in coastal battles. The new corvette is much more adapted to sea conditions, and its area of ​​application is both technically and tactically much wider. Significantly expanded its strategic capabilities.

The fact that the Russian military challenged US domination at sea and in operations using sea-based long-range cruise missiles became clear on October 7 of 2015.

At one time, the Russian navy in the Caspian Sea launched an ISIL military base with an accuracy of up to one meter of 26 cruise missiles. The distance is 1500 kilometers.

“The challenge facing us is the threat from Russian ballistic missiles from remote aviationsubmarines and other submarine and surface ships, ”said William Gortney, 62, who was once the head of the US Northern Command.

“Russia demonstrates better military power than the armed forces of the former Soviet Union, therefore today the emphasis is on quality. They now have another military doctrine, ”said the US admiral (retired from May 2016).

If the NATO military still believed that Russia was not able to go into battle with the US Navy at sea, then after the operation against ISIS it looks different ...

With ships of the new class "Karakurt", the Kremlin is now expanding the range of its actions and "responding" to NATO:

“New ground-based rocket systems in the Kaliningrad region, as well as small rocket ships, should target virtually the entire Baltic Sea — but above all the military infrastructure that NATO is building in the Baltic States,” said Ruslan Pukhov in an interview with the Izvestia newspaper.

“Instead of sticking numerically stronger and more expensive military units, Russia is building compact and few small missile and ship formations, which, however, have serious combat capabilities,” said Pukhov a year ago, when the first two ships of the previous one, the weaker class "Buyan-M" were on the way from the Black to the Baltic Sea.

This was proven by the “Black Widow” ... According to ambitious plans, by the 2022 year 18 such ships should go to sea, three of them from the Crimean shipyard “Sea”.

And one more thing: this is Putin’s first warships built on the peninsula occupied by the Russians in 2014.