Germany's last hope. The former Russian front and the fate of the 1918 campaign on the French front of the First World War

December 13 2017
16
20. 11. 1917 in the city of Brest-Litovsk - the seat of the headquarters of the command of the German Eastern Front - negotiations began to conclude a separate peace treaty between the authorities of the new Russia and the command of the enemy. 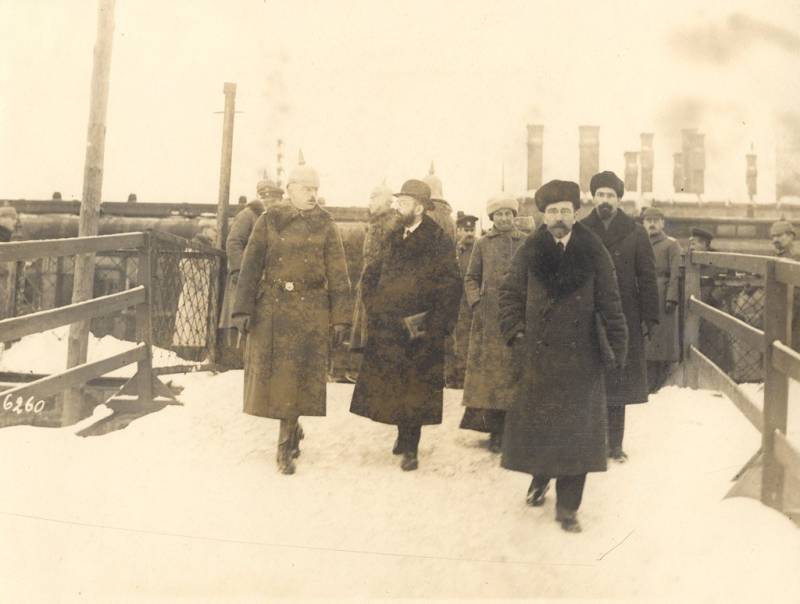 The leaders of the Russian delegation arrive at the station Brest-Litovsk.

It is obvious that these conditions were unattainable. The Germans did not want to lose the results of the Riga operation and the "Albion" operation. And they considered the liquidation of the Eastern Front as the most important prerequisite for a possible prospective victory on the Western Front - having strengthened at the expense of the formations of the former Russian Front, they planned, concentrating the maximum number of their troops in France, to try to deliver a crushing and decisive blow to the Anglo-French before the mass arrival US troops on the European continent, winning the war. But the Russian delegation showed concern for the interests of the allies (now former) on the Entente.

It was possible to reach an agreement that after the conclusion of a temporary truce (24. 11. - 04. 12.) The troops of both opponents remain in their positions, and the transfer of German troops (except for those that have already begun) ceases. The next negotiation phase ended on December 2 with a continuous truce for 28 days, beginning on December 4. His conditions confirmed that new transfers of German troops from the Eastern Front to the Western were unacceptable.

But here it is worth noting the fact that the truce was necessary for Germany precisely for the organization of such military transfers to the Western Front. And the truce was used for its intended purpose: from November 1917, the Russian front becomes a “power source” for other German fronts: if in November it intensified on the 4 infantry divisions, then the 10 divisions left it - all to the French front.

E. von Ludendorff stated that the Eastern Front was to share many forces with the Western [Ludendorff E. von. My memories of the 1914 – 1918 war. M.-H., 2005. C. 486]. And this process only gained momentum: in December 1917 - January 1918 from the Eastern Front to the Western one, 19 of German infantry divisions set off. This was carried out before the conclusion of the contract - during the truce. Moreover, at the time of the truce, troop movements reached a maximum: if, as already noted, in the 2 month (December-January), only 19 divisions were deployed from the Russian front to the French in the next 4 month (February-May).

On March 3, a separate peace treaty was signed in Brest-Litovsk between the RSFSR and the four states of the German bloc. It meant Russia's withdrawal from World War I and the loss to it of the territory in which a third of the population of the former Russian Empire lived. Up to a third of cultivated agricultural land, resources of the railway network, more than a third of the textile industry, etc. were lost. Even the most terrible military defeat could not lead to such conditions that the new leadership of the state went to — five minutes later the winner in world war.

This event greatly influenced the folding of the Romanian front - as a result, the Entente Eastern Front was liquidated.

03. 03. 1918 was the day when Russia’s participation in the First World War was complete, although Russian military contingents continued to fight as part of the Allied armies, and the former Eastern Front bound a large number of Austro-German troops.

But peace in the East allowed the powers of the German bloc not only to continue the war, but also, making it possible to concentrate the maximum possible forces in the West, to try to realize the last chance of victory. The collapse of the Caucasian front unleashed the hands of Turkey, which could intensify its actions against British troops in the Middle East and Mesopotamia.

The German unit was able to win an extra year. This fact is confirmed by an employee of the French General Staff, a military statistics researcher, Lieutenant Colonel Larcher, who wrote that since October 1917 there has been an "emptying" of the Russian front in favor of the French - as if they were two communicating vessels. The freedom of action of the high command of the enemy became very wide only from this moment - the moment that freed up a lot of German troops on the Russian front, allowing four fifths of all forces in the west to be concentrated at the beginning of 1918. Considering that the Russian front consumed most of the Austro-Hungarian troops, it is highly likely that if Russia continued to fight as vigorously in the 1917 campaign as in 1916, the Danube Empire collapsed in 1917 and the world war would be reduced by a year [Lieutenant Colonel Larshe. Some statistics of the 1914-1918 war. // Military alien. 1934. No. 12. C. 128]. The cavalry general A. A. Brusilov, commander-in-chief of the armies of the South-Western front, agrees with him. [Conversation with General Brusilov // Annals of the War 1914-1916. No. 110. C. 1760].

But, despite the withdrawal from the war, Russia held down large forces (over a million Austro-German soldiers and officers; only the German infantry divisions in November 1917 - more than 70) of the enemy, who continued to spend, despite the limited material and technical resources (aggravated by the blockade) huge funds for the provision of infrastructure and military contingent on the former Russian front.

Germany’s last hope - the spring offensive of 1918 in France did not translate into strategic success, including because there were no moving forces to develop the success achieved - the cavalry (9 cavalry divisions) was concentrated in the east.

As noted by the Soviet military historian division commander V. A. Melikov, “... the presence of a mobile kind of cavalry in the form of cavalry in the first March breakthrough on Amiens ... as the researchers of World War (Kul, Sect, Brando, etc.) confirm for the germans. Thrown into a breakthrough, pursuing a retreating enemy, the cavalry would seize Amiens railway junction, in 15 km from which the exhausted German infantry lay ” [Melikov V. A. Strategic deployment from the experience of the First Imperialist War 1914-1918. and the Civil War in the USSR. T. 1. M., 1939. C. 364].

The former quartermaster general of the German General Staff, General of the Infantry G. von Kul, said that the presence of large cavalry formations in the Amiens direction among the Germans could create a decisive role in the question of seizing Amiens: if the cavalry entered into the wide gap that formed opposite the right flank the German 18 Army (Fukukur - south of Roy) at the junction of the British and French armies, she would not only have detained, catching them by surprise, being transferred (by rail and by car) to the French the divisions, overturned the allied artillery that came up without cover, but also sowed panic in the rear of the French and British troops, who were still fighting the 18 army and the left flank of the 2 army [Melikov V. A. Decree. cit. C. 464].

The fear that the Eastern Front inspired the Germans was such that the High Command of the Second Reich held considerable forces here even during the period of heavy and momentous battles in France X. E. E. von Ludendorff noted that even though the Russian army was not a combat factor in this period , but the Russian front could be revived every minute [K. Perepelovsky. The Role and Importance of the Russian Front in the 1914 — 1917 War. according to foreign military sources // Military Profit. 1971. No. 112. C. 5].

By the beginning of Operation Michael, the former Eastern Front held only German infantry divisions up to 50. Is it a lot or a little? Everything is relative, for example, in the “Michael” operation 62 of the German divisions was originally involved.

E. von Ludendorff did not have enough divisions left in the East during the last throw to Paris, and the lack of these troops in France at a crucial moment is called fatal for the Germans by the circumstance and their last and fatal strategic mistake. 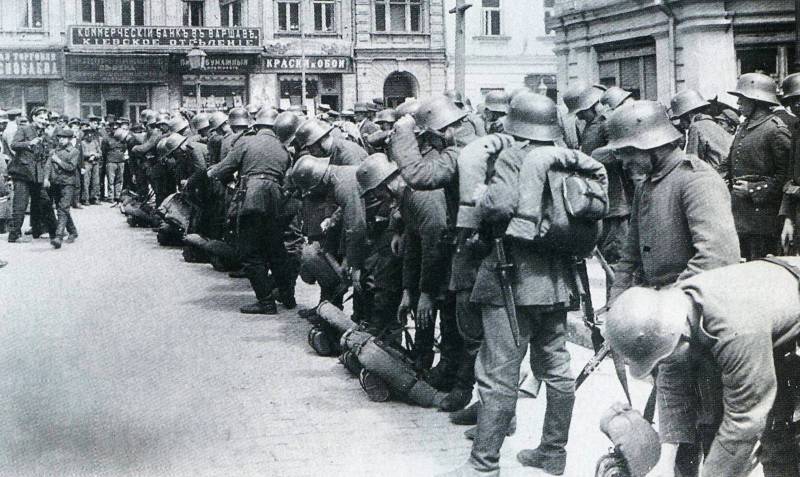 Ctrl Enter
Noticed oshЫbku Highlight text and press. Ctrl + Enter
We are
Riot dayReports from the militia of New Russia for 27-28 September 2014 of the year
16 comments
Information
Dear reader, to leave comments on the publication, you must to register.