December 7 2017
6
American serial tanker KC-46A Pegasus made the first flight. According to the Boeing aircraft manufacturing concern, the flying tanker spent three and a half hours in the air. Checks found successful. Upon completion of the test program, this aircraft will be handed over to the US Air Force. 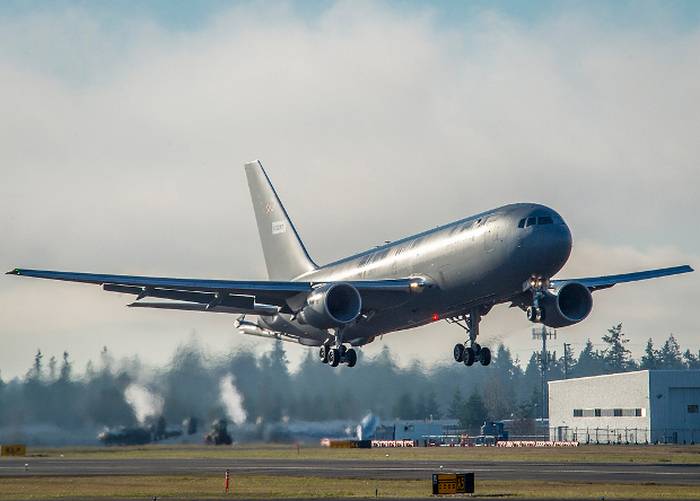 The KC-46A is being developed from the 2012 of the year based on the cargo version of the Boeing 767 airliner. The aircraft will be able to reach speeds of up to 920 kilometers per hour and fly over a distance of thousands of kilometers to 12,2. The KC-46A will transport up to 92 tons of fuel. As part of the first contract, Boeing must supply the Pegasus tanker with a military 34. In total, the United States Air Force intends to buy 179 such aircraft.

In service with the US Air Force, new tanker aircraft will replace the outdated KC-135 Stratotanker.

In addition, the US Air Force announced the creation of a new tanker aircraft, which so far received the symbol of KC-Z, and which in the future will replace the KC-46A.

The new refueling aircraft will have to operate in the face of moderate opposition from the enemy. New “flying tankers” will fly at a distance of 400-800 kilometers from the immediate threat, but in the radar and aviation the enemy. For this reason, aircraft of the KC-Z project must be made invisible.

The new tanker aircraft will be capable of shortened takeoff and landing. Thanks to this, it will be possible to use the tanker from runways with a length of half as much as is necessary for modern tankers KC-10 Extender and KC-135, reports "N + 1"