December 7 2017
8
In the Krasnodar Territory, in the picturesque village of Mostovsky, the legendary woman, first-class test pilot Marina Lavrentievna Popovich (Vasilieva), who was nicknamed "Madame MIG", has lived her last years. Now one of the streets in this village will be named after her. And they buried Marina Lavrentievna on December 4 in the Moscow region, in Mytishchi. Solemnly held weapons fireworks ... 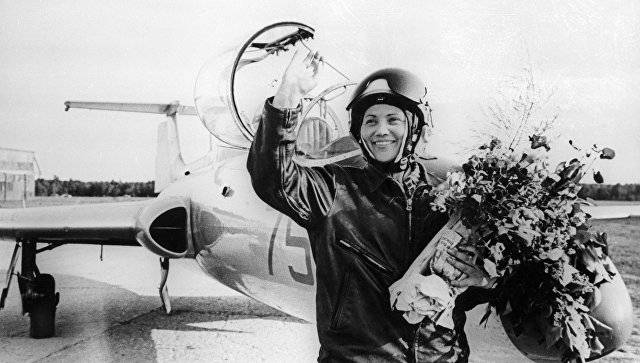 Among her merits are six thousand flight hours, flights on 40 types of aircraft, 102 world records, 10 of which is on the AN-22 aircraft. In 1967, she, the only one among Soviet women, broke the sound barrier on a MIG-21 jet aircraft. Then Marina Popovich broke the record of the American pilots Jacqueline Cochran, for which she got her nickname - “Madame MIG”. In recent years, wrote books, was in the Union of Writers of Russia. She became the author of the scripts for the films “Sky with Me” and “Bouquet of Violets”.

Marina Lavrentievna Vasilyeva was born in the village of Samusenki, Smolensk region. From early childhood, she had to work a lot - after her elder sister died, Marina stayed for the eldest in a large family. The girl had the ability to music. She might have become a musician, but ...

The Great Patriotic War began. The guys had to hide from the bombing. The girl made a deep impression on a case when a Soviet plane was shot down by fascists in the sky. The pilot tried to jump, but was killed in the air. After that, Marina had a dream to become a pilot.

The family was evacuated to Novosibirsk. There Marina after school entered Novosibirsk aviation technical College. Due to her short stature, the girl didn’t reach the pedals on the plane - I had to perform special exercises. She got hers, after which she was able to go to the flying club. She jumped with a parachute, and then became a pilot - athlete DOSAAF.

However, Marina wanted to become a military pilot. It would seem that during the Great Patriotic War "Night Witches" showed such heroism, which was not a match for every man. And this, in theory, would have to unambiguously resolve the issue of women's participation in aviation (including military). However, Marina, unfortunately, had to deal with manifestations of bureaucracy and inert thinking - she was repeatedly told: “This is not a woman’s business.” And breaking through this wall is sometimes harder than coping with the heaviest machine ...

Marina went to Moscow for a long time sought reception with Marshal Clement Voroshilov. Sometimes it was necessary to spend the night in a park on a bench. But the girl reached her - Voroshilov accepted her and issued a document in which he asked “as an exception” to take her to the Saransk Flight School. Marina graduated from this educational institution with a red diploma. At first she worked as an instructor pilot, then she flew to the Central Aeroclub named after Chkalov in Moscow.

In 1962, Marina, who graduated from the Leningrad Academy of Civil Aviation and married astronaut Pavel Popovich by then, tried to become an astronaut herself. Unfortunately, the medical board weed out.

In 1963, Popovich decided to become a test pilot. She had the rank of senior lieutenant in the reserve, mastered five types of aircraft. But she again had to overcome numerous bureaucratic barriers along the way. And she got her way again.

In 1965, Marina tested the Yak-25РV reconnaissance aircraft. There was an emergency situation that almost cost her her life. Sensing oxygen starvation, she attempted to activate an emergency oxygen system. But the system did not work, and the pilot lost consciousness. The plane began to fall. Marina still managed to plant him. As a result, changes were made to the design of the aircraft, and Marina Lavrentievna Popovich was introduced to the title of Hero of the Soviet Union.

It would seem that her life was a triumph, but once, after one of the risky flights, she was fired - only because the woman ... Then there were two terrible years of life without the sky, for which she very much yearned. In this situation, the aircraft pilot was saved by aircraft designer Oleg Antonov. He invited her to work in his development bureau. Popovich, without hesitation, immediately agreed. Soon she began to fly again. In addition, Antonov instructed her to create a detachment of women aviators.

In 1980, Marina divorced her first husband — he could not stand the fact that his wife was fully committed to aviation. Soon she married again - Boris Zhihorev, deputy chief of staff of the ground forces aviation. Spouses were co-authors of several books.

In the preface to one of her books entitled “I Am a Pilot!” Zhihorev wrote these words: “As time passes, people will forget the names of those who today do not descend from the screens and pages of the media. And the descendants will connect our time with the names of Gagarin, Korolev and other true heroes. Among these names, the name of the great woman of the 20th century, Marina Popovich, will remain forever.».

In the last years of her life, Marina Lavrentievna held an active civil position, was in the Communist Party of the Russian Federation and the Union of Soviet officers. Was interested in ufology. She died on November 30.

«... And the joy of flying is life, real life. And the truth is that a person, having risen to the sky himself, having enjoyed the power over the machine, having believed it, will love this boundless ocean of light, sun and joy forever ...", - she wrote in the book" I am a pilot! "With her happy and heroic life, she proved the truth of her words.