Do you want to look like a floor cloth? Ask Arkady - how!

December 9 2017
197
/ Russian athletes should go to the Winter Olympics-2018 in Pkhenchkhan, despite the decision of the International Olympic Committee (IOC) to remove the national team from the competition.
This was stated by Deputy Prime Minister Arkady Dvorkovich, his words passes TASS.

“Athletes who will go to the Olympics, and we know who they are, will have a form with white, red and blue flowers. And in any case, we know that they will represent Russia. Therefore, they should go, ”said Dvorkovich. / 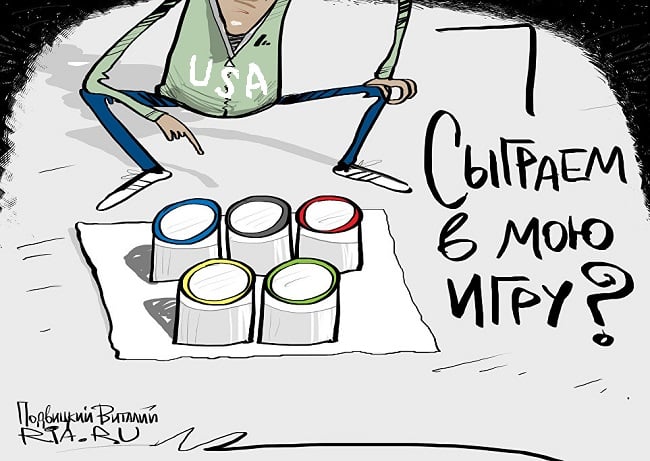 Predictable - it happened! Did not become shocking news for many, the news that our country tried to humiliate. I underline - ATTEMPTED AND REDUCED! But whether this humiliation will take place fully depends on the athletes themselves. Of course, I'm talking about the primordial fuss around our Olympic team and the mortified decision of the IOC to remove our athletes from the Winter Olympics-2018. The palette of opinions about whether our athletes, who have mercifully allowed the powerful WADA to play their brightest will, are worth participating in the Olympiad or not, is a vast palette. And all put forward a variety of judgments and arguments in favor of their position. And why on this subject I can not speak, and find out - how much my opinion coincides with the opinion of many others and, accordingly, to understand how wrong I am? Speak out.

At once I want to say that (this is my opinion) the athletes of our country go to the South Caucasus and perform there under a neutral flag, without all the state attributes necessary for such an event, notОum Not "should not", not "not recommended" and not somehow more streamlined. You need to stand behind art.ОIt’s not a bright idea and highly moral brainchild of Pierre Dekuberten, how it was born and developed until the irrepressible greed and rabid ones were what the holiday of sports was turned into by the Anglo-Saxon hand sport and the unprincipled, cowardly Western politicians. money was not corrupted by a child and turned into an unprincipled machine for making money.

In my opinion, the participation of our athletes in these OIs according to the rules that the IOC selectively dictates to our country, is the adoption of a posture humiliated and persecuted. This is a humiliated acceptance of undeserved guilt and confirmation of the supremacy of whims and vile fictions of bureaucrats from all that Kodla, who for many months was sweating under the blanket of periosports intrigues, trying to bring to light, allegedly, international opinion. In fact, this is the opinion and desire of those forces that are not wealthy either politically, or sportingly, nor militarily, nor socially and, in general, are not able to conceive anything of value, since they have long been confused by such wonderful concepts, as a woman and a man. That's why they let out at sports arenas, at times, such monsters stuffed with steroids, that Frankenstein looks quite like a nice guy against their background.

And now - on the argument of those who speak in favor of our athletes going to Korea to play games.

You can hear from some (by the way from the athletes themselves, something I did not see and did not hear in the media), which is a pity for the strength and self-sacrifice that athletes spent and showed during the preparation for the Olympic Games. Yes, it is a pity. And is it right that, having brought so many sacrifices, to come to the games (and even endure the humiliation of facelessness) and face biased and boorish refereeing, to which our sworn partners are very resourceful and eager? To whom to appeal, and who will defend impersonal athletes in such cases? Who will deal with the legal support of claims of unfairly condemned athletes? The athletes themselves? And have they seen how unceremoniously, brazenly and without evidence of guilt are falsified results in all these “unbiased” and “global” ones?

Should I endure this humiliation? Let's weigh and compare. Two comes to mind historical examples - Alexander Nevsky and Peter the First. Nevsky repeatedly took on the burden of humiliation in order to save his state from the devastating raids of the Horde. That is why he came to Sarai to prevent a possible massacre of the Russian people by the Mongols. That's why he stood for days in the smoke of "cleansing" fires. " As a result, he provided the state with a period of respite and accumulated strength to defeat the Teutons and lay the foundation for the further victories of Russia, up to the overthrow of the Mongol yoke. The horde was strong. Russia was then only gaining strength and was weak. The great goal demanded great humiliation from Alexander Nevsky, and he endured it for the good of the Motherland. Are the situations equivalent - the efforts of Nevsky and the efforts of our athletes in an effort to get to the stadiums of the OI-2018 at least in a carcass, even in a scarecrow? I don't think so. Our guys will look like strangers at this celebration of life, and they will not add prestige to their country. And I am sure that bureaucrats from sports will gladly make efforts to further humiliate those already slandered and slandered. Do you think the sports fraternity will break the bureaucratic broom of the IOC? Far from it! Look, with what pleasure the brothers-athletes from other countries are ready to accept the medals of our Olympians. All sorts of "asthmatics" and "sclerosclerosis" who devour illegal drugs are already eagerly drawn to the medal re-presentation ceremony, which Bach announced (What a great name he fucked up!).

The argument in favor of the fact that our athletes, speaking at this Olympiad, will still feel like citizens of Russia is a rather weak argument. Something reminiscent of the current Ukrainian authorities, which bathe in the rays of their own - Svidomo - one hundred and forty-thousand-year-old history, which you have not scratched together in what pig-house and are very excited about this.

Our athletes are our pride. They are the children of their country and its defenders in sports battles. They are inseparable mentally from the Motherland and, therefore, should support it in its affairs and its troubles and failures, and not exacerbate the humiliation, considering that this (IOC decision) is not humiliation at all, and no one will notice. They will notice and laugh heartily when they see the bowed head of the Russian sport.

So, my opinion is that in this case, you should leave, slamming the door loudly and take your money, and not listen to the far-fetched arguments in favor of participating in the act of mocking yourself.

Well, as for the statement of A. Dvorkovich, which was submitted by some media as a statement of the Russian government, then Arkady is not a government, but its member. So he could roll into South Korea and take part in sports lists. But "I am plagued by vague doubts" (c) that he will be ashamed of him there.

Behind this, I take my leave. Written on the day of the announcement of the shameful decision of the IOC in the media regarding the participation of the Russian national team in the OI-2018.

P.S. Somehow even the language does not turn to call the upcoming games the Olympics. Only in this way - Oi-2018.

Ctrl Enter
Noticed oshЫbku Highlight text and press. Ctrl + Enter
We are
A great interview with Sergey Lavrov: about Ukraine, Obama and IranWhat you didn't want to know about England
197 comments
Information
Dear reader, to leave comments on the publication, you must to register.