December 6 2017
148
Syria is completely liberated from terrorists, all the gangs of the Islamic State * (IG *) banned in Russia have been destroyed, Chief of the General Staff of the Armed Forces of the Russian Federation, Army General Valery Gerasimov, said at an annual briefing for foreign military attaches on Wednesday.

All the ISIL gangs * (the outdated name of the IG *) in Syria were destroyed, and the territory itself was liberated
- he said, adding that Defense Minister General of the Army Sergei Shoigu already reported on this to Russian President Vladimir Putin. 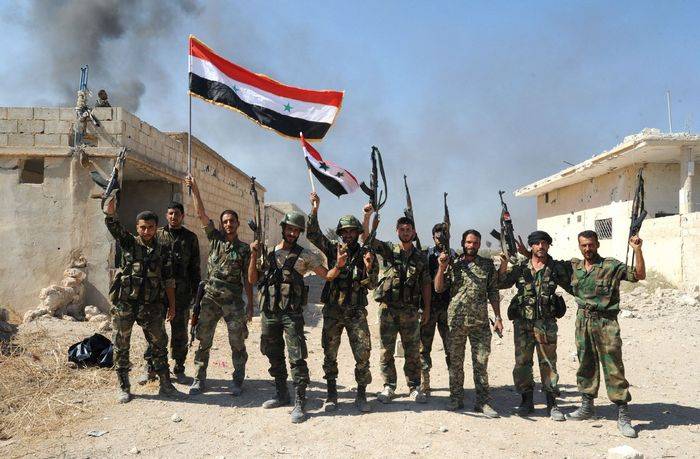 Today, the advancing units of Brigadier General Suchel and the 5 Volunteer Assault Corps defeated the remaining illegal armed forces [in Deir-ez-Zor] and, after liberating the settlements of Salihia, El-Khreyt, Qatyah and Musalah, joined the government forces advancing from South. Thus, today the territory controlled by ISIS * does not exist in Syria
- concluded the Chief of the General Staff.

On Tuesday, the Russian Defense Ministry reported that the last enclave of the IG * in eastern Syria had decreased to a territory of 7 size by 10 km.

Gerasimov also said that the Russian Defense Ministry is ready to conduct a dialogue with American colleagues on assisting them in the destruction of militants in the western regions of Iraq.

According to him, the attention of the international coalition should be focused on the destruction of militants in the western regions of Iraq to prevent the return of the Islamic state * to Syria and the exclusion of the revival of the "caliphate" there, and not "on the deployment of its military bases in Syria."

Ready to engage in dialogue and join American colleagues in solving this issue.
- said the head of the General Staff of the Armed Forces.