We can endlessly "dig" in the details of the Japanese sword and ... it will be all the same interesting. In general, this is a real "Pandora's box", it is not for nothing that Japanese swords have so many fans. But this is not surprising. Every detail in them is not only functional, but also beautiful. But this is not easy to achieve. Behind this is a century of thinking about the beautiful, comprehending the measure of things, the ability to feel the material and work with it. 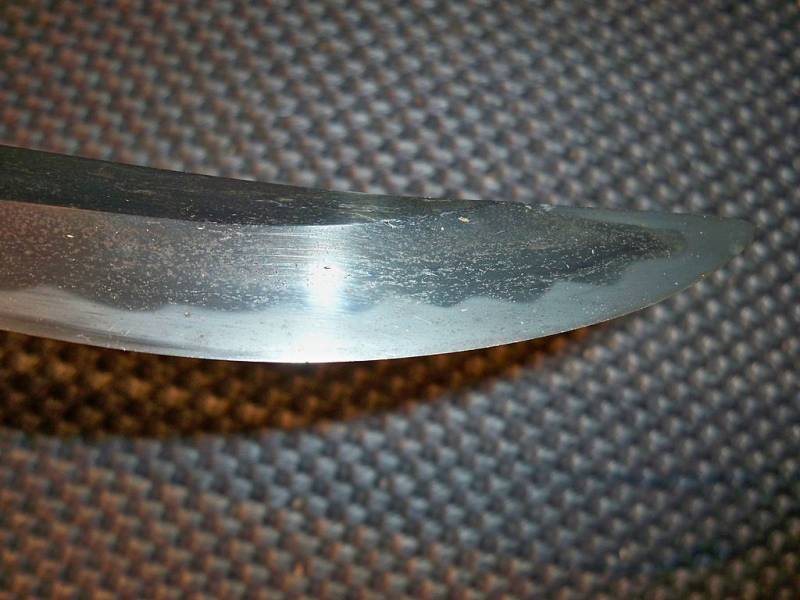 Let's take another look at this - the line on the tip, which is called the bosi. How beautiful these waves are on polished steel! This line of quenching also has its name - midari-komi, that is, “wavy”. Although, it would seem, we have a completely utilitarian thing. By the way, here we see the blade naginaty, and not tati or katana. 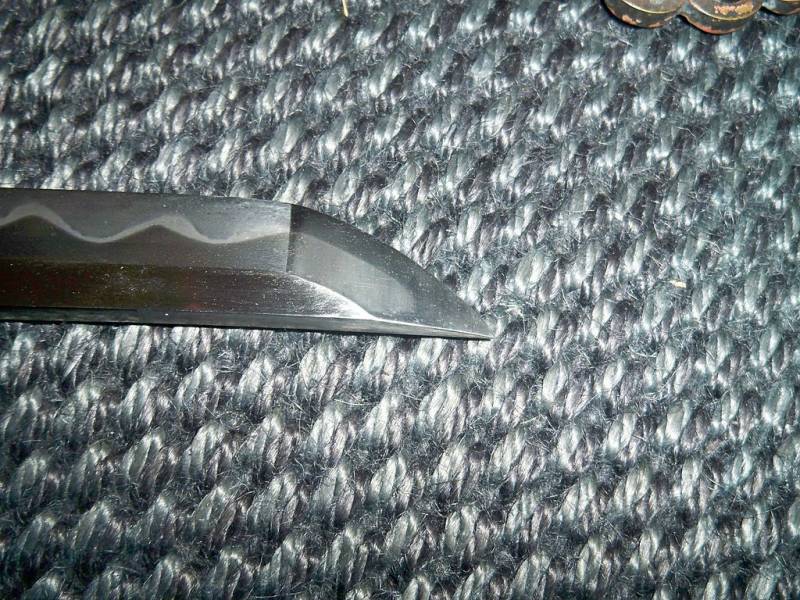 But this photo shows kissaki - the actual tip, the hardened part of the blade (yakiba), and the quenching line - bosi, separating the tempered blade ha (or ha-saki) from the blade itself - ji-tsui. It is darker, but the hardened part is lighter and the Japanese naturally distinguish them. The light part is called ha-tsui and it is practically the same as the yakiba. In any case, we will not be mistaken, calling this part of the blade and so and so. But immediately there is also a line of the Ekote - a dividing point and a blade. As you can see - in the Japanese sword, everything is very, very difficult. A lot of terms describing the width of the blade (Mihab), its surface pattern (jihad), the butt of the blade at the point (mune-saki), and so on. 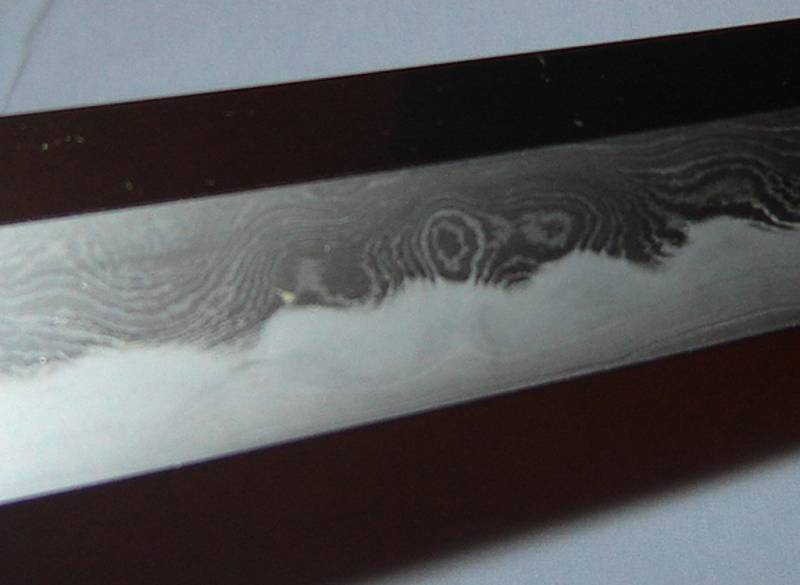 Had pattern. According to him, an experienced master could recognize the author of the sword, even without reading his signature on the shank of the nakago. 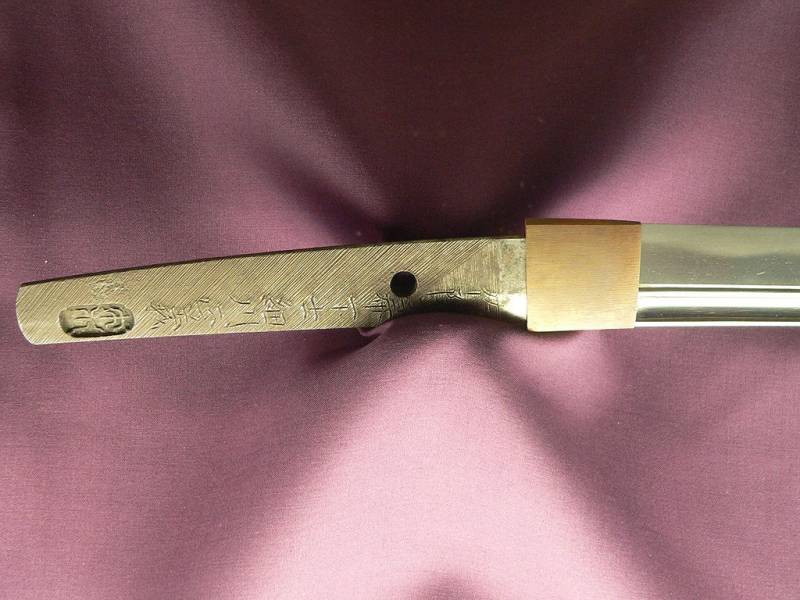 Naturally, the shank of the blade nakado nihonto was also not quite utilitarian detail. In the photo you see such a shank from the wakizashi blade with the signature of mei. Note the notches on the surface of the shank. They also had a special name - Yasuri-me. Their 13 types exist and they all do not resemble each other. And they were made for a reason, but in order to ensure a stronger contact of the wooden handle with the shank. The name of the blacksmith could be carved on the shank - kao, “name with title” (jure-mei), if the smith worked at the yard, age of the blacksmith, his nickname, name of helper (give-mei), verses (!), Is called the temple, which the blade was dedicated, and the result of the test was how many corpses and how many blows with this sword were cut. It is good that all this is never written on the same shank. With a dozen hieroglyphs - this is already a great text! 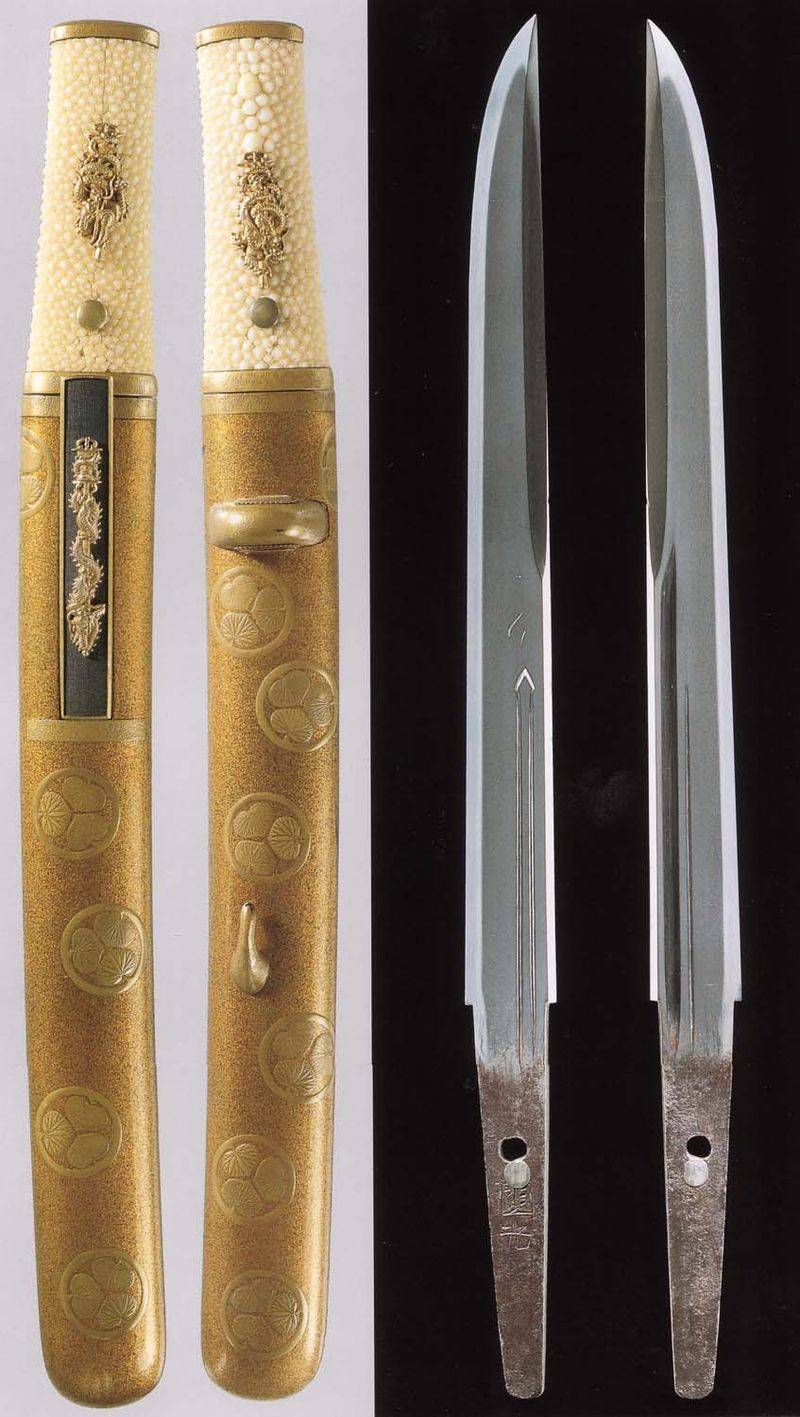 This photo shows a beautiful 25,1 long Hamidashi dagger with the emblem of the Tokugawa clan. Very similar to tanto ... but not tanto. The difference in the absence of tsuba. Instead, a small roller and all. Ko-gotan with an engraved metal handle is inserted into the sheath. His blade with dol (hee) attracts attention. There were eight types of dol, running along the entire blade and four dol at the shank. 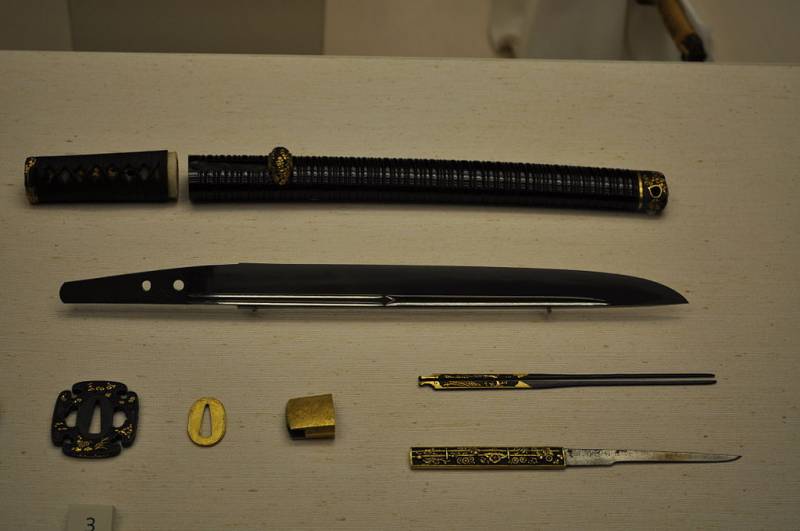 Dagger tantто from the collections of the British Museum in a disassembled form. Blade with a long dol - kuitigai-hee. From left to right: tsuba, seppa, habaki, kari-kogai - divided into the middle of the kogai (about him in the past material), and the "knife" of the co-goan. 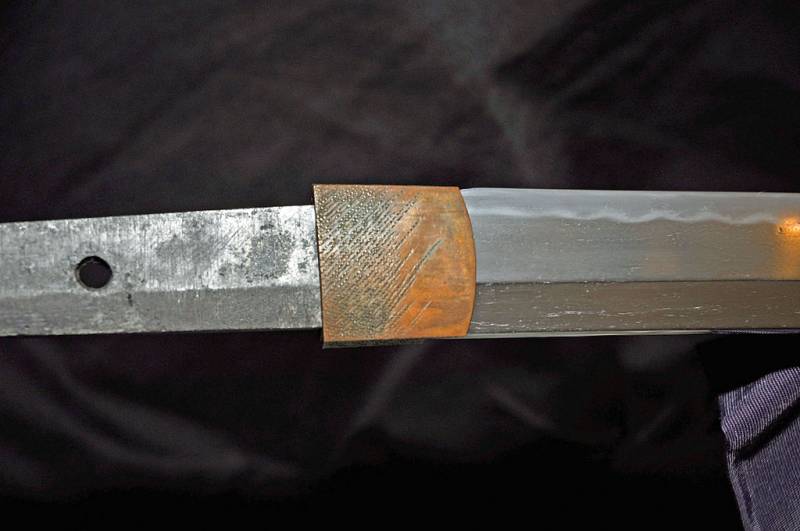 Also seemingly inconspicuous detail on the blade of a Japanese sword or dagger, but of importance - habaki - fastener blade blade. Here we see the mekugi-ano - the hole for the mounting pin. 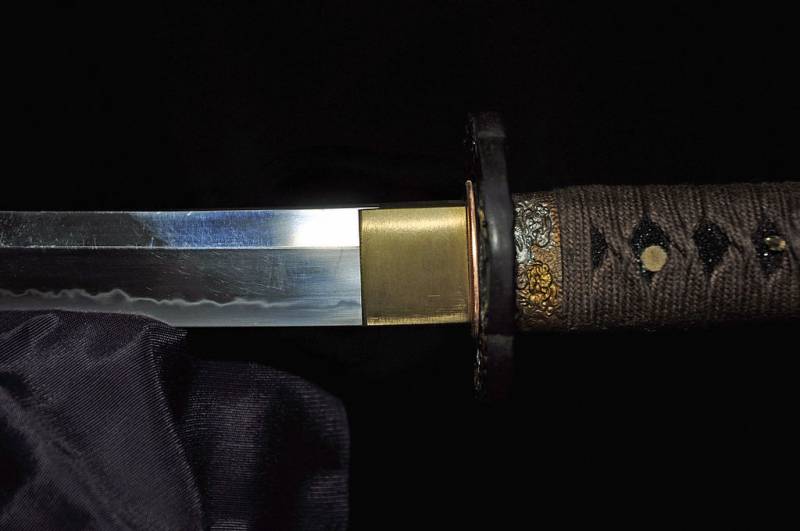 And here this detail (habaki) is well visible, firmly fixing the tsuba. 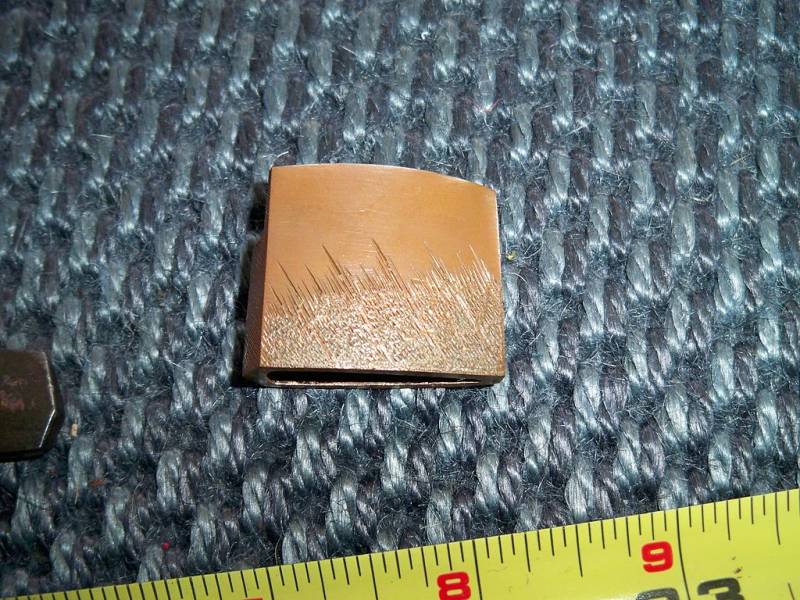 This is how habak looks when this item is removed. But interesting - it is not completely smooth. On it are made relief strips. What for? For some reason ...

The habaki clutch has the least artistic merit, but it is absolutely necessary, and it is on every Japanese sword, dagger, and even on spears. It is a thick metal sleeve, which is designed in such a way that its inner side fits tightly to several last centimeters of the blade of a sword or dagger and also its shank (nakago). It has several functions: first of all, it eliminates the friction of the blade and, above all, its hardened part on the surface of the scabbard. The blade of the sword under the hubs should be lightly oiled to protect this place from corrosion. But the main function of the habak is that it allows to transfer the recoil from the blow through the guard to the tsuba to the whole handle, and not to the peg of a mekugi made of bamboo or a horn.

Khabaki was made from copper, covered with silver or gold, or with gold or silver foil, and also with shakudo alloy foil. Its surface is either polished, or covered with oblique strokes neko-gaki ("cat scrapers"). The foil can be decorated with a stamped pattern. Khabak with the family coat of arms of mon usually belong to good swords. 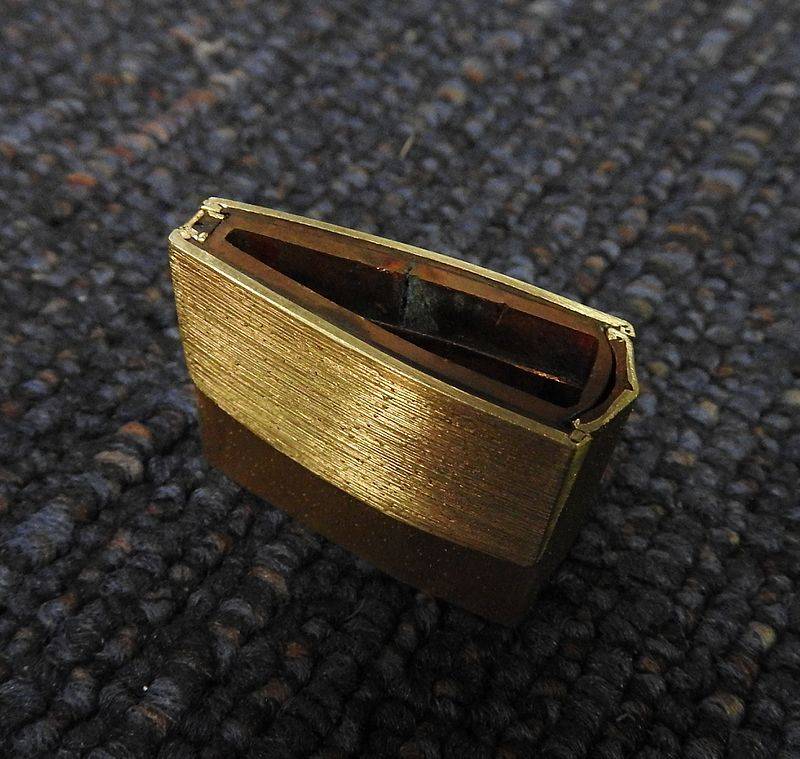 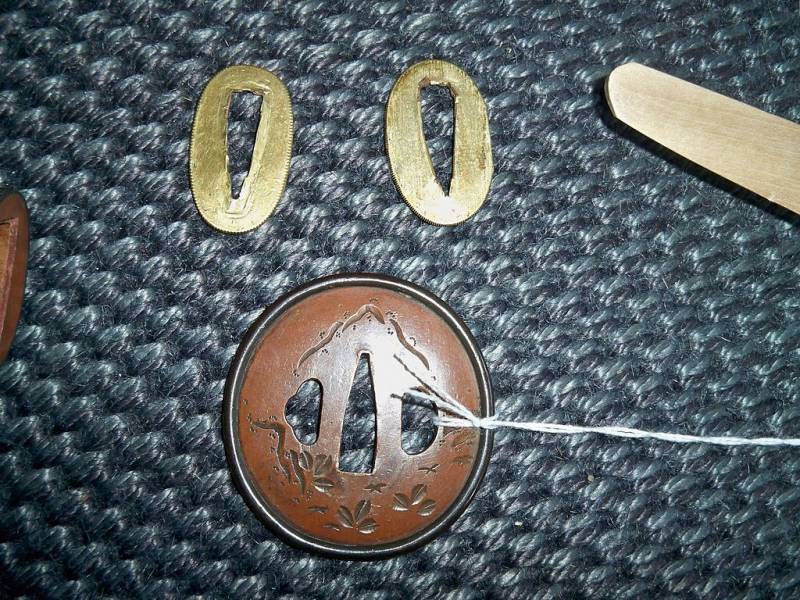 Two sepps and tsuba. Khabaki rested on seppu and thus pressed her to the handle of the zook. But not immediately to the handle ... 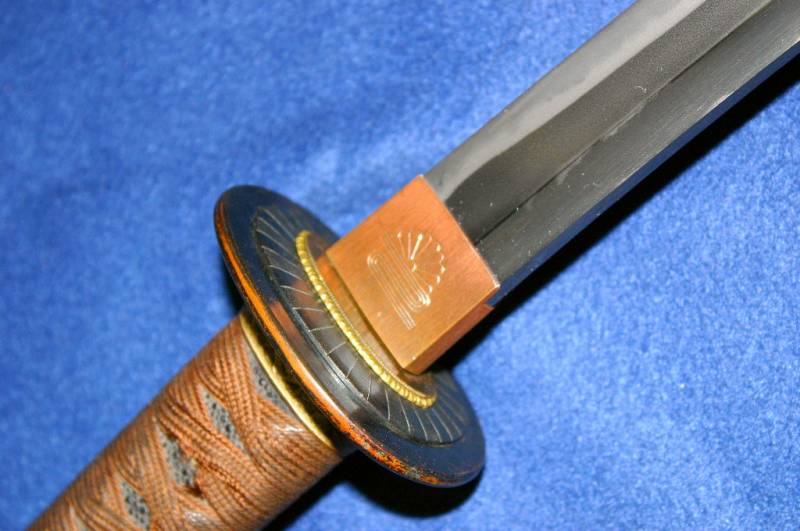 Sometimes the mon - coat of arms was knocked out on Khabak. 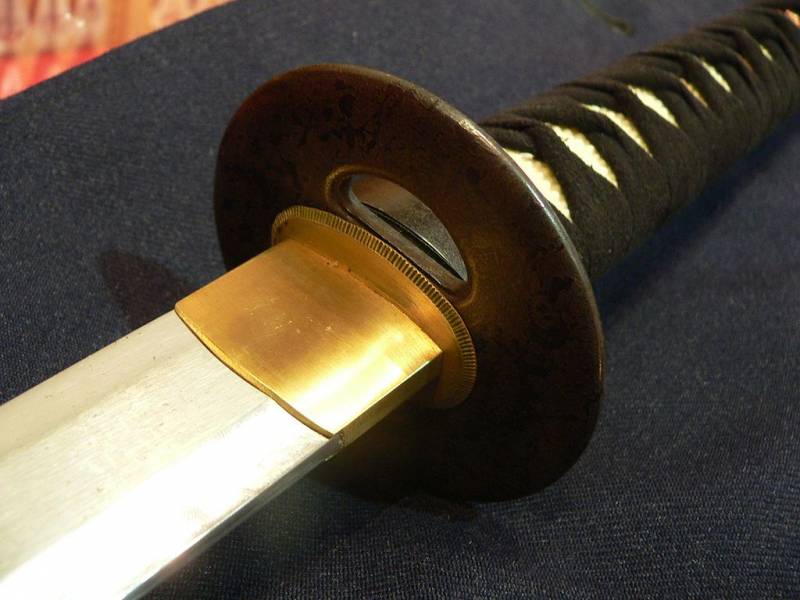 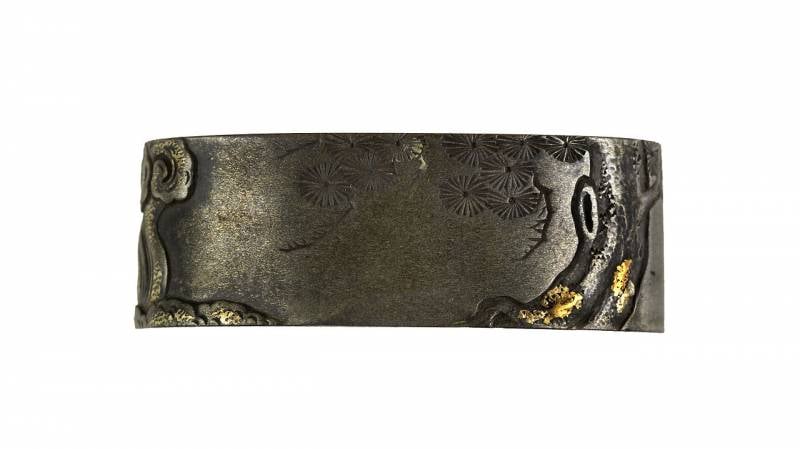 Directly behind the seppa, facing its handle, was another clutch, futi. Futi covers the handle where it comes into contact with Seppa. This item is easily removed. But despite all its utilitarian purpose - to strengthen the end of the handle, it is a small work of art. It comes along with another component, which is called a Kasira (jap. "Head"). (Walters Art Museum, Baltimore) 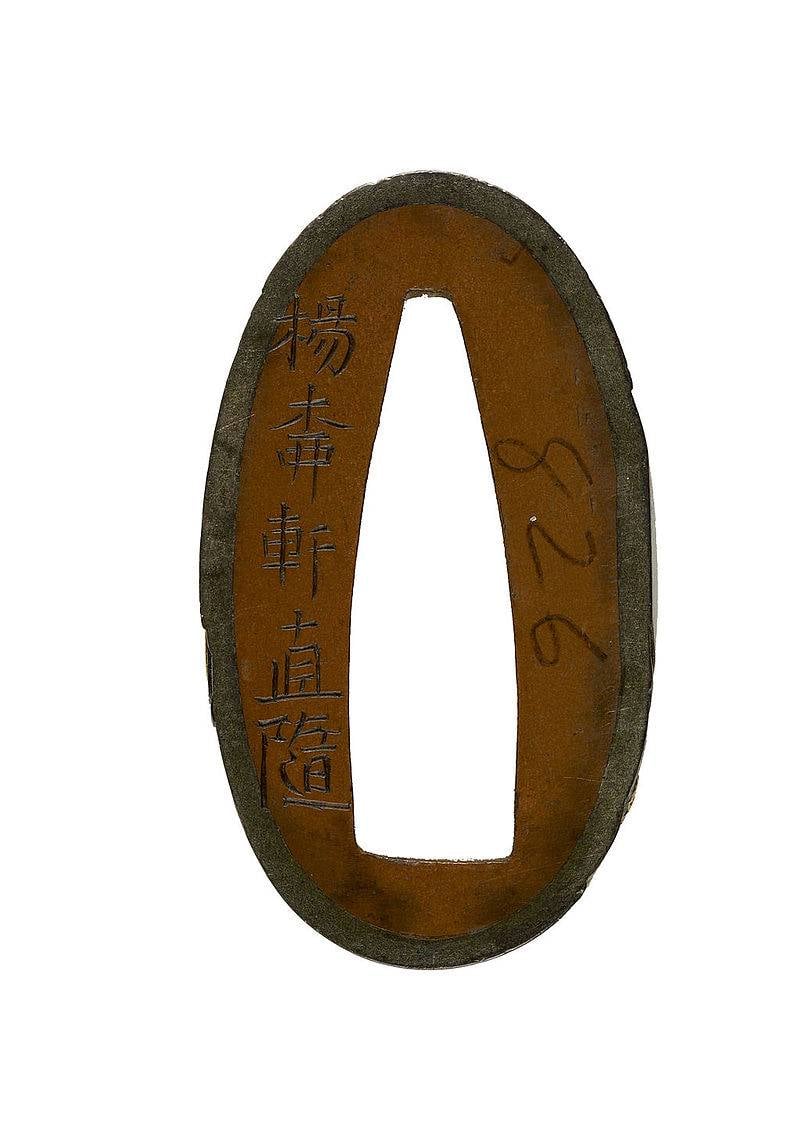 Cut for blade shank in futi. Since Futi was made by a separate master (along with Kashira), she signed with him on the outside, adjacent to the sepp coupling. (Walters Art Museum, Baltimore) 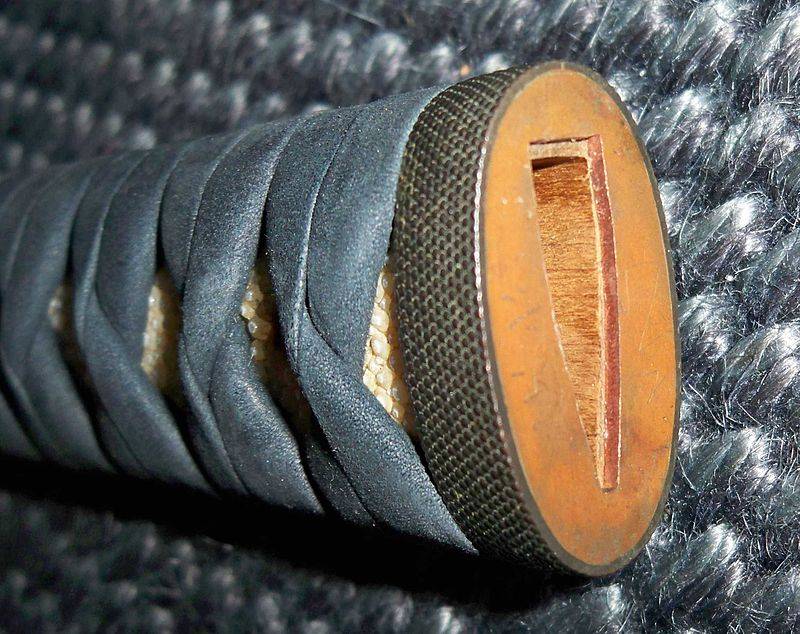 Hole in the handle for the head of Kasira. 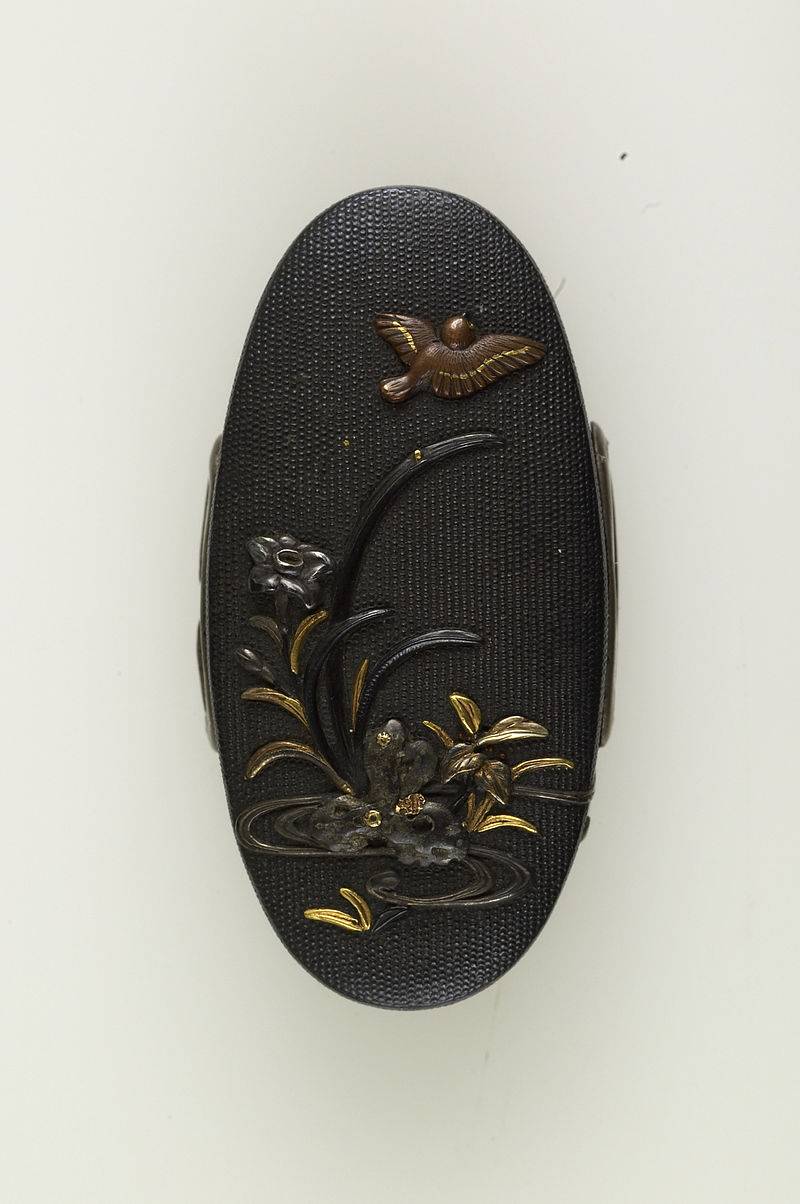 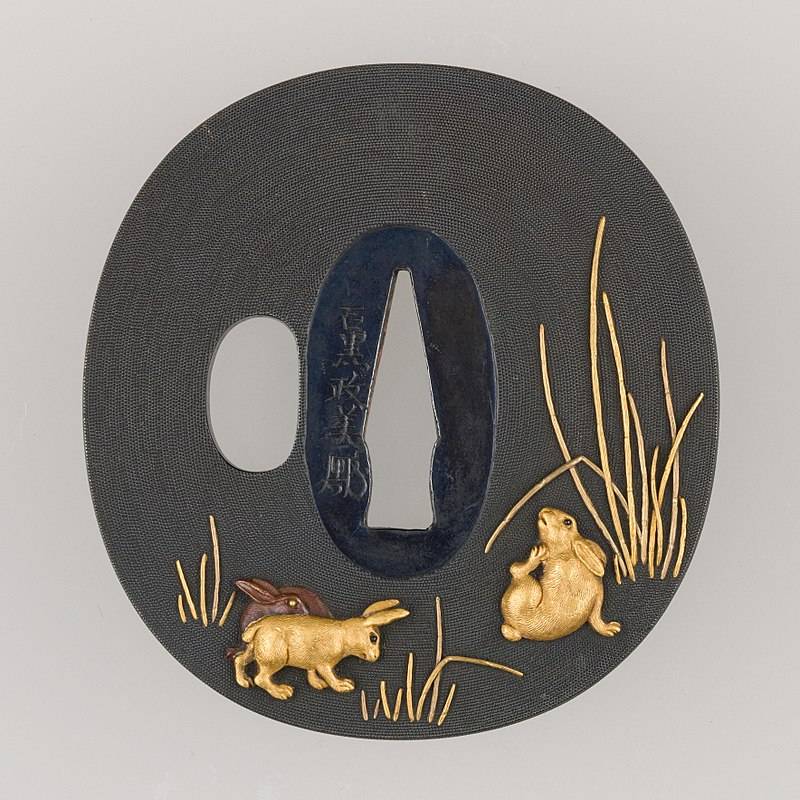 Both the futi, the kasir, and the tsuba should have been drawn up in the same style. But this rule was not always followed. Tsuba "Hares". (Metropolitan Museum, New York) 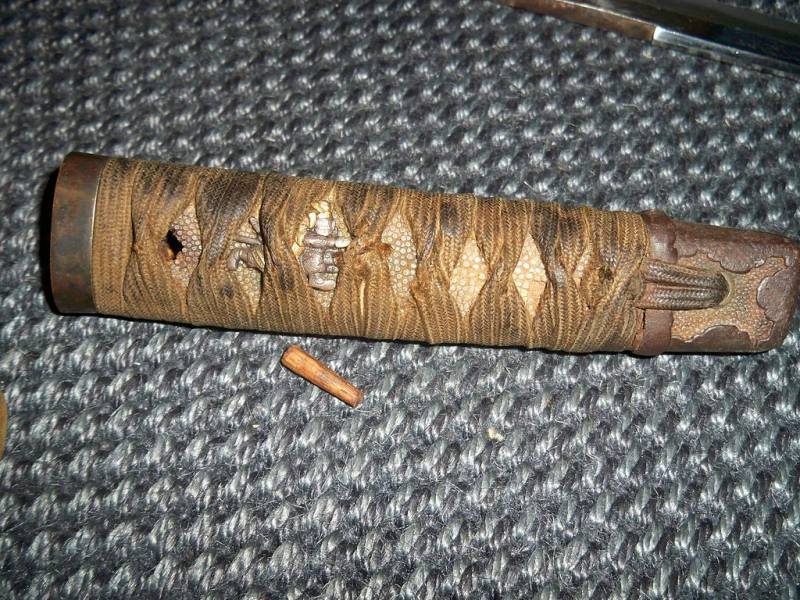 A very important thing is the mekugi fixing pin. It was on him that the whole rim of the Japanese sword rested! He does not allow the blade to fall out of the handle. The material is usually wood (!), Bamboo, but sometimes made from rhino horn. On one side of the handle is hidden winding, on the other is visible.

Menuki - on the contrary - the detail is decorative, but it seems to help tightly clasp the handle. Again, a sign of the good taste of the sword owner is a uniform style for each, Ko-Gotan and the menuki itself. Daisho-sorimono — that was how this complete set for two swords was called. Attach the menuki not only under the sheath, but simply on the arm tight.

Tsuka dagger tantто. And on her manuki. All the above-mentioned details of the rim of the blade are also clearly visible. 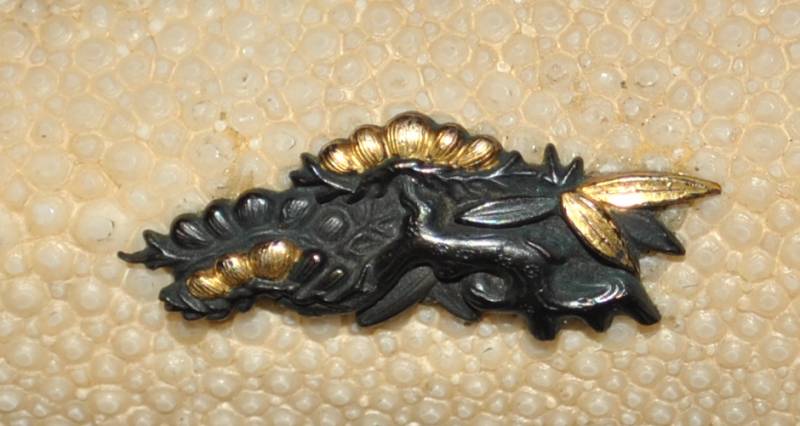 Manuki large. They liked to give each other samurai (it is clear that complete with other details). As they say, a trifle - but nice. 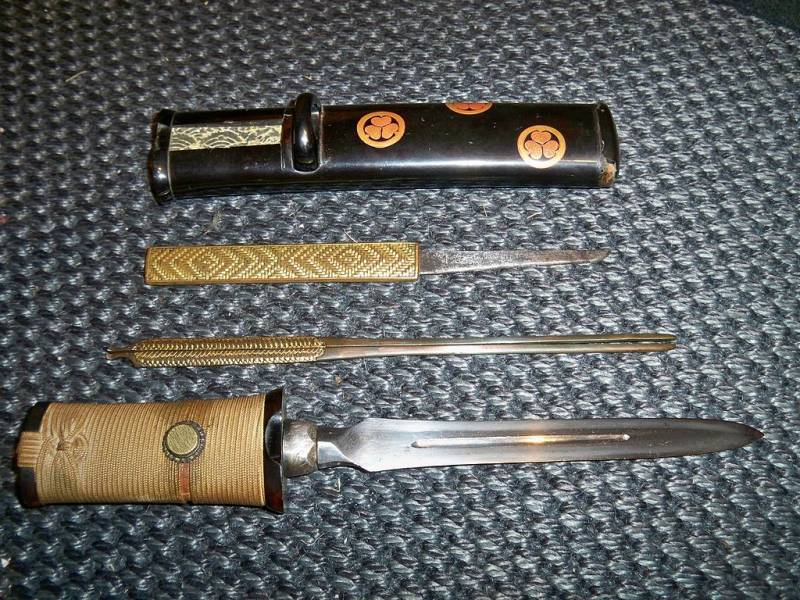 The very original tanto-yari dagger is the “spear dagger” of the Edo era. All the details of the kosirae - rim are shown: sheath, handle, braid, vari-kogai, go-goan.

Jutte is, in fact, not a dagger or a knife, because it has a cylindrical or multi-faceted blade without a blade and without a point. Jutte was a special weapon Japanese Edo-era policemen. With a blade with a side hook, they caught the enemy's sword and thus could pull it out of their hands or then break it with a second blade. A lanyard with a colored brush was attached to the ring on the handle, the color of which indicated the rank of a policeman. 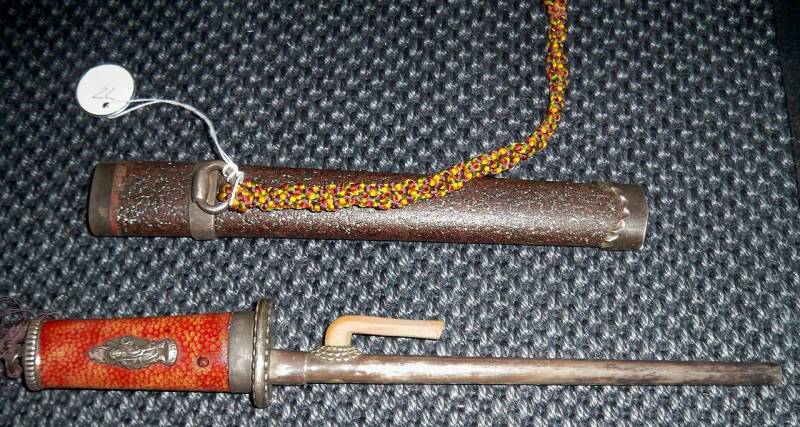 Dagger jutte rimmed in the dagger of tanto.

The Japanese adored cases and cases. Here is a sword case in which it was stored during the journey. It was called katana-zutsu. 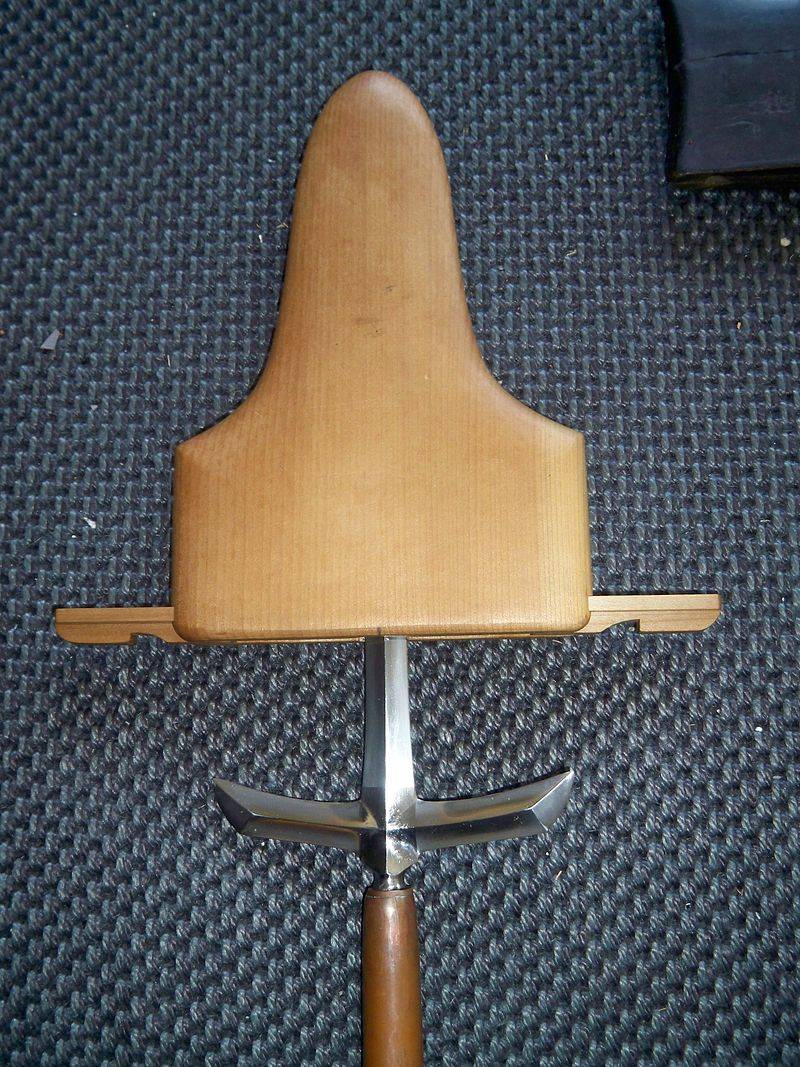 But the Japanese put the cases (sai) on the tips of their copies, including the most unusual ones. For example, for a tip of a spear of a jujonji-yari.

The sword in the rim was stored here in such canisters - Katana-Bako.

Stand for Katana Kake swords. On the sheath of daisyo, the characteristic braid with a cord is a sageo. 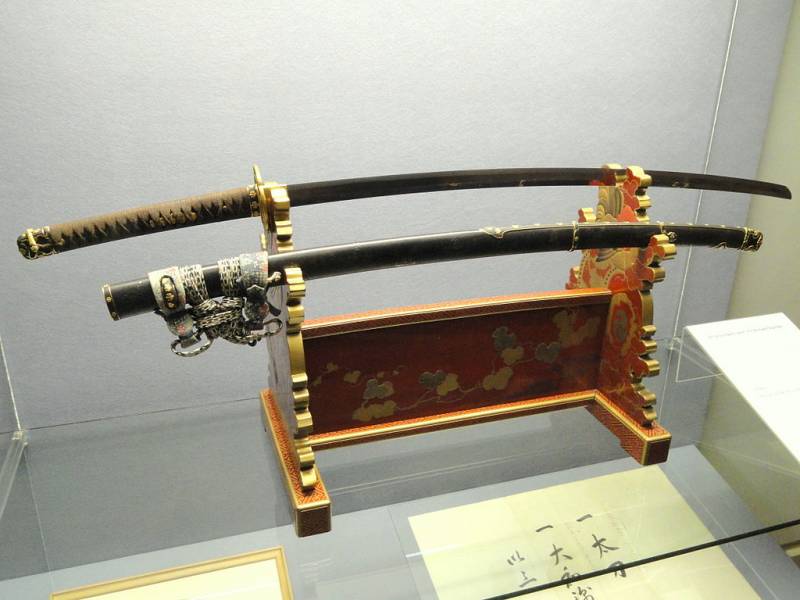 Stand for swords - Katana Kake 1861 (the State Museum of Munich) 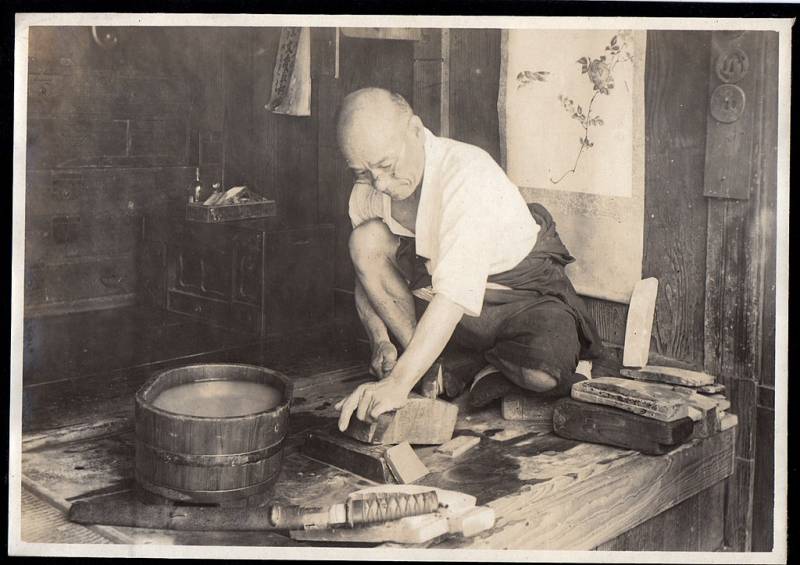 1915 swords grinder of the year at work. Photo by Elstner Hilton.

Yes, the Japanese sword is a whole история, which can be immersed in a long time and ... very deep. But we will finish our “immersion” for now.