Next Big Future: US Navy and Air Force Overloaded, Russia And China Take It

December 7 2017
14
For all their combat power and multiplicity, the naval and air forces of the United States are not without certain flaws and are forced to overcome various difficulties. All such difficulties in one way or another weaken the sea and air fleet, which may be beneficial to third countries. Such facts and trends, quite expectedly, attract the attention of specialists and analysts.


November 26 presented its interpretation of current developments in the development of the US Navy online publication Next Big Future. The editor-in-chief of the publication, Brian Wang, published an article entitled “US Navy, the Air Force are overworked,” “The Navy and the US Air Force are overloaded, and Russia and China are making efforts to exploit this weakness.” As is clear from the title, the subject of the publication was the current trends in the development and operation of the American armed forces, as well as foreign reaction to such events. 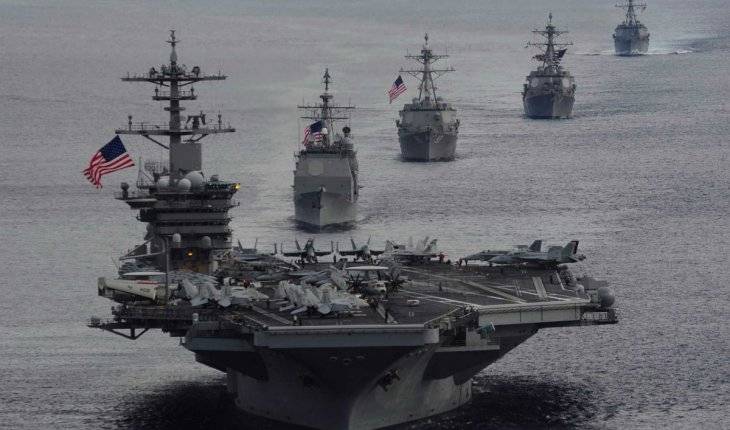 B. Wang begins his article with a reminder of the current problems of the US military fleet. He points out that the U.S. Navy reduced the number of personnel, and this led to an increase in the load on the remaining sailors. Sailors and military officers have to keep watch for 100 hours a week. This has certain negative consequences.

With the help of regular exercises, including international ones, the naval forces of the United States have the opportunity to “stretch their muscles”. When planning future operations, the fleet must take into account various factors, including the need to maximize military power in the shortest possible time. In the event of the start of a hypothetical conflict, the naval forces will have to pull at least three aircraft carriers with ship groups into the combat area. Such operations impose special requirements on the fleet. According to B. Wang, to solve such problems it is necessary to start restoring the Navy.

The US Pacific Fleet is currently the largest and most numerous operational-strategic alliance of its kind in the world. It has about two hundred ships and submarines, as well as about 1200 airplanes and helicopters. A total of 130 thousand military and civilian specialists serve on Pacific bases. Nevertheless, according to the author of Next Big Future, even this is not enough for the desired level of combat readiness that meets the requirements of time.

For example, the US Navy's 7 fleet has a uniquely large area of ​​responsibility. He should monitor the situation in the territories and water areas with a total area of ​​124 million square kilometers. The eastern boundary of this zone is on the date line, and the western is a continuation of the India-Pakistan state border. The fleet must operate from the latitudes of the Kuril Islands to Antarctica.

The Pacific Fleet as a whole is called upon to solve several basic tasks directly connected with the situation in the region. He must follow North Korea’s activities and, if necessary, respond to its actions. He should participate in joint operations with the naval forces of South Korea, India, Japan and other friendly states. Also, the US Pacific Fleet is responsible for countering the Chinese Navy in the South China Sea.

B. Wang also addressed the problem of a shortage of pilots in the United States Air Force. Earlier this year, Senator John McCain, who in the distant past served in the maritime aviation, drew attention to the problem of lack of flight personnel. He called this situation a “full-blown crisis,” which could have the most serious consequences. According to the senator, the lack of pilots may lead to the fact that the combat potential of the Air Force and their ability to complete the task will be called into question.

A few days before the publication in the Next Big Future, Air Force Minister Heather Wilson once again raised the issue of the lack of pilots. According to her, at the moment the Air Force lacks two thousand pilots. Ongoing operations deplete the available forces. As a result, the command needs to prepare in advance for new actions, taking into account the available capabilities.

The High Command has already taken some measures to reduce the shortage of flight personnel. In October, US President Donald Trump signed a decree that would allow the air force to return retired pilots to active service for up to three years. This decision of the President expands the conditions of the program Voluntary Retired Return to Active Duty, which started in July. Under this program, retired military personnel are given the opportunity to return to the army for a specified period. Initially, the VRRAD program provided for the possibility of returning personnel to 1000 specialties. Now pilots can join it.

However, the first month of the new program conditions did not have time to bring noticeable results. According to B. Wang, so far only three retired pilots have taken advantage of this opportunity. Obviously, this is too little to fulfill current plans.

The lack of personnel is also observed in the naval forces, which leads to unpleasant consequences. Prolonged combat service of ships leads to a significant increase in the load on their crews. The author recalls the recent incidents with the destroyers USS Fitzgerald (DDG-62) and USS John S. McCain (DDG-56), based on the Pacific until recently. The crews of the ships were engaged in the performance of operational duties and combat service, which seriously hit the training process. Such a problem could well be one of the reasons for two collisions of destroyers with foreign ships.

B. Wang quotes Karl Schuster, now a professor at the University of Hawaii, and in the past a naval officer who served on warships for about ten years. He notes that in the absence of sufficient time for training activities, “transient atrophy of skills” is observed. In this context, he compared the crew of a warship with a football team: they must constantly train.

The increased load on personnel leads to another problem, one of the consequences of which turns out to be difficulties with the full training of seafarers. Faced with unacceptably high complexity and duration of work during service, overloaded sailors lose interest in its continuation. They refuse to renew contracts and continue to serve. As a result, the ship goes on the next trip without them.

Such a situation seriously complicates the training of personnel. Excessive loads are literally squeezed out of the fleet of sailors and officers who have undergone certain training. It takes time to train new replacement specialists.

Another problem of the naval forces of the United States is related to the state of the shipbuilding industry. In September of this year, the United States Audit Office (Government Accountability Office), after conducting an industry audit, came to disappointing results. It turned out that the state of the existing factories involved in the construction program of ships for the navy leaves much to be desired. The problems with the equipment of the plants and with the enterprises as a whole are revealed.

The specialists of the Accounts Chamber studied the state of shipbuilding and made some conclusions about its prospects. Inspections and calculations showed that to restore production capacity to obtain the desired results that fully meet current requirements, you will need a separate long-term program. Such work may take up to 19 years.

China and Russia are using the problems of the United States

Brian Wong believes that the Chinese military have already learned about the existing problems of the American armed forces. The naval forces of the People’s Liberation Army of China are free to work close to their shores and to cover their activities with ground forces. The US Navy, for obvious reasons, will not be able to fully resist such threats. The position of the US fleet in the Pacific may worsen if China continues to deploy new ship formations and strengthens its operations in coastal areas.

Russia does not lag behind China and is also increasing its combat power. Among other things, the Russian navy and air force in recent years have shown increased activity. Moscow’s interests affect both Europe and other regions.

The article “US Navy, the Air Force are overworked for the next big future” is not optimistic and tells about the current problems of the two main arms of the US Army. Indeed, now the US military is facing a serious shortage of people, which leads to noticeable problems. At the same time, certain measures are being taken to stabilize the situation.

However, not all such measures lead to the desired results, as indicated by the observed effects of the expansion of the VRRAD program conditions. As B. Wang points out, a few weeks ago, D. Trump allowed the air force to return retired pilots to active 1000 service, but this has not yet led to the desired replenishment of units. Reports to return to the flight crew have so far filed only a few people - less than one percent of the expected number. At the same time, the updated Voluntary Retired Return to Active Duty program will cover only half of the Air Force’s pilot requirements.

The situation is similar in the naval forces, but in this case there are several additional specific problems. Due to the increased load, the sailors leave the service, which is why their duties have to be transferred to other servicemen, and in addition, the fleet loses people with the necessary experience. In this context, we should recall the plans of the American command for the development of the Pacific Fleet in the coming decades. Current problems can seriously hit the build-up of forces in the Pacific and limit the real capabilities of the Navy in the region.

The current problems of the American armed forces in an understandable way affect the overall level of fighting efficiency of individual combat arms. It is quite natural that such a development of events turns out to be beneficial for the main geopolitical rivals of the United States. China also claims leadership in Southeast Asia and can fulfill its plans, taking advantage of its geographical nature. Russia, in turn, receives certain advantages in Europe and some other regions.

However, the command of the American army at all levels sees and understands the existing problems, and also tries to get rid of them. Not all new steps quickly lead to the desired results, but still allow the Pentagon and the White House to look into the future with cautious optimism. Whether new programs will be able to solve the existing problems, and whether optimism is justified, time will tell.


The article "US Navy, Air Force are overworked to exploit the weakness":
https://nextbigfuture.com/2017/11/us-navy-is-overworked-so-russia-and-china-ramped-up-activity-to-exploit-the-weakness.html