December 6 2017
30
The budget 1,2 billion rubles, added to the United Shipbuilding Corporation (USC) for preferential leasing, will be used to build new passenger Komets on the order of the Kalashnikov concern, reports Kommersant. 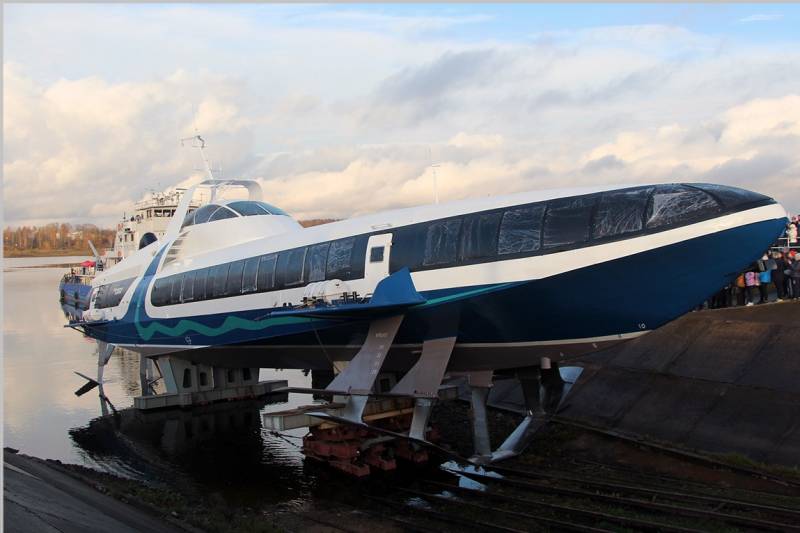 As Boris Kabakov, director of the shipbuilding and marine engineering department of the Ministry of Industry and Trade, explained, “2,4 billion rubles, which additionally allocates the budget to the authorized capital of USC for preferential leasing, will go to the corporation in the near future,” of which 1,24 billion rubles. go to passenger ships, the rest - to transport.

Passenger - these are three “Comets” on hydrofoils, which are being built by the “Kalashnikov” concern at the Vympel shipbuilding plant in Rybinsk. The first new "Comet" is launched this October. Perhaps the order will be transferred to the Feodosia shipyard "Sea".

According to Kabakov, from 2018, as part of an instruction from the president, to resume the Azov-Black Sea high-speed passenger lines, the experienced Kometa will start on the route Yalta-Sevastopol, the route of two more ships is being specified. Kalashnikov plans to build three more Comets in order to connect Krasnodar Krai with the Crimea.

We count on the transport and tourist component. It is planned to extend the route to Feodosia, Kerch and Anapa, possibly to Sochi. We are interested in the program, since the “More” shipyard in Feodosia works in cooperation with Vimpel (“The Sea is transferred to Kalashnikov’s management) and the completion of subsequent ships, and the construction of two fully Komets is already planned at the Feodosia shipyard.” , - said the Minister of Industrial Policy of Crimea Andriy Vasuta.

According to Andrey Vasyuta, “Kalashnikov” is the customer of the ships and organizes the operators.

Now it is decided who will be the participant of the operator, perhaps the regions will enter there - Crimea, Sevastopol, Krasnodar Territory, perhaps there will be a private company. There is no final decision.
he said.

The region is counting on the popularity of routes, citing high demand in the USSR.

A newspaper source in the industry reported that the cost of the lead ship 600 million rubles. Vympel had no competence on comets, so it was built quite a long time (from 2013 onwards), he noted, so the transfer of the order to the experienced “Sea” looks logical (up to 1981 on, Comet was built on the Feodosia Shipbuilding Plant ).

Ctrl Enter
Noticed oshЫbku Highlight text and press. Ctrl + Enter
We are
In Russia, the construction of a passenger hydrofoil ship "Comet 120M"Laid the keel of the first Soviet-era icebreaker with a capacity of 25 megawatts
Military Reviewin Yandex News
Military Reviewin Google News
30 comments
Information
Dear reader, to leave comments on the publication, you must sign in.