Germany will stop looking at America from the bottom up

December 7 2017
19
On Tuesday, the Acting Minister of Foreign Affairs of Germany, Sigmar Gabriel, spoke at a Berlin foreign policy forum organized by the German Körber Foundation. Gabriel’s speech was readily quoted by the leading German media. There is a reason for this. After long altercations, the Social Democrats, who in the current cabinet of ministers represent the head of the foreign ministry, agreed to negotiations on the formation of a new German government. So this speech can be viewed as a request by the Social Democrats for a new foreign policy agenda. First of all, it concerns relations with the United States of America. It is noteworthy that it was the United States who persistently pushed the leaders of the SPD to participate in the new government of Germany. 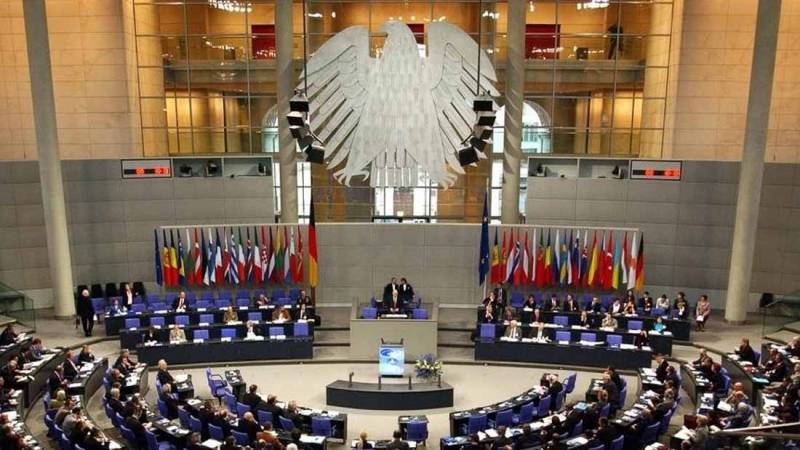 Social Democrats asked to the government

As is known, after the elections to the Bundestag that took place in September in Germany, an unusual political landscape emerged, in which the main parties could not form a majority in parliament to form a government. The former partners of the Christian Democrats (the party of Angela Merkel), the Social Democrats announced their retirement to the opposition.

Angela Merkel, whom German President Frank-Walter Steinmeier commissioned to form a new government, had to gain a parliamentary majority, not so much by political as by arithmetic principle. Thus, a coalition formed from a bloc of Christian Democrats (CDU / CSU), free democrats (FDP), and an environmental party (the 90 / Green Union) came to light.

Experts were skeptical of this new political entity. Because the program goals of the parties, which Merkel attracted to the negotiations on the establishment of the ruling majority, did not coincide on many key points - issues of energy security, the admission of migrants and the reunification of their families, environmental protection, etc.

In the end, it happened. An unusual coalition collapsed at the stage of preliminary consultations. Acting Chancellor Angela Merkel in a fever suggested going to new elections, but then she woke up in the Germans historical memory. A similar situation was in the thirties of the last century.

Then, as we remember, the democratic parties of the Weimar Republic could not agree on unity of action and a common political program. On their contradictions, the German nationalists broke in coalition with the National Socialist German Workers' Party (NSDAP) Adolf Hitler. Dictatorship came to Germany.

In the current Bundestag, a radical right-wing party also appeared - “Alternative for Germany”. Local politicians sometimes evaluate it as extremely radical and recognize that AdG has the potential for further growth. After all, the migrant crisis of 2015-2016 has fueled the nationalist moods of the Germans well. No one knows how this will manifest itself under conditions when democratic parties cannot agree among themselves.

Not only German politicians were concerned. President of the Federal Republic of Germany Frank-Walter Steinmeier, the American President Donald Trump, and the head of France Emmanuel Macron spoke with the leader of the Social Democrats Martin Schulz. Schulz was strongly advised to keep the old large coalition with the Christian Democrats and not to put Germany on the prospect of questionable elections.

The Social Democrats have long resisted. For the fourth term, they did not want Angela Merkel to bear the new reputational losses and finally lose her seriously depleted electorate. As the previous cadence and the elections that followed it, the mistakes of the Chancellor in matters of migration and reception of refugees, relations with Russia and multiculturalism policy hurt the authority of the Social Democrats who are in the ruling coalition.

The SPD has learned from this lesson and moved into the opposition. Now she was actually forced to return to the ruling majority. The other day Social Democratic leader Martin Schulz announced the start of negotiations on forming a cabinet of ministers, and his party colleague (Foreign Minister Sigmar Gabriel), in a speech at the Körber Foundation’s forum, practically formulated the conditions for at least their foreign policy part SPD

Germans want to press the USA in Europe

Gabriel spoke floridly. “The undoubtedness with which we perceive and preserve the US role in the world — even in the presence of random contradictions with them — ceases to be unshakable,” the Bavarian newspaper Süddeutsche Zeitung quotes the minister. - Washington itself gradually begins to consider Germany differently than one of its many partners. This means that we are inevitably perceived as competitors. ”

Behind this diplomatic rhetoric, the experts clearly saw the desire of the German minister to reconsider the policy of the Federal Republic of Germany with regard to the United States and to make substantial corrections to it. And Gabriel proposed this approach: “We should designate our positions and, if necessary, draw a line beyond which even our partners cannot enter.”

The minister outlined two such features in his speech at the forum. The first is the interference of Americans in the energy plans of the Federal Republic of Germany. Gabriel cited the example of the restrictive measures imposed in the summer by the US Congress against Russia and its companies. They questioned the future of the Nord Stream-2 gas pipeline.

In the text of the law approved by the House of Representatives of the United States Congress on 25 in July, opposition to this project is stated as one of the goals of American policy in Europe. Meanwhile, Germany connects its energy security with Nord Stream-2 and is ready to pursue the construction of this important highway for the German economy.

The second forbidden line that the United States crossed was for the minister to see Washington’s stated willingness to abandon the agreement on Iran’s nuclear program - the Joint Comprehensive Action Plan (JAP) concluded in 2015 in exchange for the gradual abolition of Western sanctions.

Of course, Germany has accumulated more claims to America. This could include multibillion-dollar fines imposed by the US Department of Justice on German banks, automobile and engineering concerns, listening by US intelligence agencies to the negotiations of leading German politicians, including Chancellor Merkel.

Finally, the attempts of the US administration to make a new independent power center in Europe from Poland became a serious irritant to Berlin. In the summer, before the NATO summit, US President Donald Trump turned to Warsaw. There he actively supported the Polish geopolitical project of the Intermature Sea. Along the way, he criticized Germany for spending too low on defense.

German media then exploded with a barrage of indignation. Radio WDR, commenting on Trump's visit to Poland, saw in him an attempt to split Europe. The weekly Spiegel called the visit of the US President and his speech in Warsaw an "anti-European and anti-German gesture." The newspaper Handelsblatt did not like that Trump in Warsaw criticized Germany for its cooperation with Russia in the field of energy. Radio Deutschlandfunk noted that statements made by Trump in Warsaw "may be the cause of acute disharmony in the European Union."

About all this, accumulated in the German memory, Sigmar Gabriel said nothing. I stopped only on two examples - obstacles to the construction of the Nord Stream-2 and withdrawal from the agreement on Iran. “In both cases,” the minister stressed, “Germany cannot afford to just wait for the decisions of Washington and act in response to them.” So the application was made for an independent German foreign policy.

An example of her Gabriel demonstrated, without leaving the podium of the forum. He proposed to the European Union a kind of "new eastern" policy in relations with Russia. The reason for this “new turn” is that without the Russians, Europeans will not be able to solve many of their key problems, the main of which is the problem of security. Hence the gradual easing and lifting of sanctions, the resumption of full-fledged cooperation with Russia.

The Germans, accustomed to looking at America from the bottom up, were a little taken aback by the bold conclusions of their minister. Then they themselves grew bolder and began to comment on Gabriel's speech. For example, as its meaning was understood, Stefan Meister, Program Manager for Eastern Europe and Central Asia in the German Society for Foreign Policy (DGAP).

“Berlin is understood,” said the analyst in an interview with Deutsche Welle, “that America will play a smaller role for Germany in the future and we need to look at who we can work with in Europe to resolve conflicts, and solve them independently.” And here I see that Gabriel is signaling readiness for steps towards Moscow. ”

This readiness has not yet become official policy. Moreover, in Germany there is not even a government that would undertake its implementation. However, the conclusions of the Acting The German foreign minister shows that the need for a “new eastern policy” has emerged. Now Germany and Europe have to comprehend this new reality.

Ctrl Enter
Noticed oshЫbku Highlight text and press. Ctrl + Enter
We are
Reports from the militia of New Russia for 27-28 September 2014 of the yearResults of the week. "Well, do not change me because of every idiot!"
19 comments
Information
Dear reader, to leave comments on the publication, you must to register.