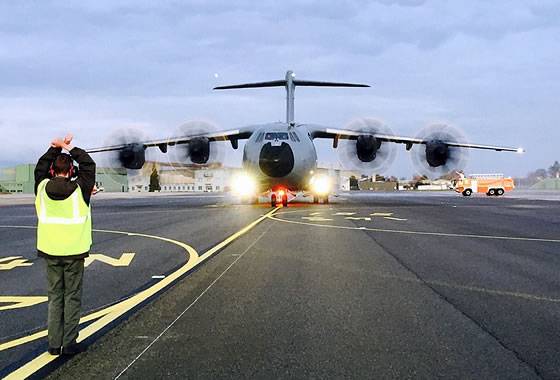 This is the first board, which is equipped with two container systems for refueling other aircraft in the air.

According to the resource, “the first manufactured for the French Air Force by Airbus Defense and Space A-400M was officially transferred to the MoD of France 30 September 2013 of the year, the 11-th Atlas serial aircraft was received in January 2017 of the year”.

As noted in the material, the A-400M is a BTA tactical aircraft and "has no direct competitors in the global market." It is equipped with four turboprop engines and is capable of taking off and landing from short unprepared runways.

With a maximum payload of 37 t A-400M "can transport a wide range of military equipment of non-standard size, including two helicopters AH-64" Apache ", one CH-46" Chinook ", one PU MIRS" Patriot ", one SG M-109 plus cargo pallets and billing, two M-113 and 30 armored personnel carriers, one landing armored personnel carrier VBCI and 10, one landing gear, one heavy excavator plus cargo pallets and personnel, ”the publication reports.

Ctrl Enter
Noticed oshЫbku Highlight text and press. Ctrl + Enter
We are
Today, the military transport aviation of the Air Force marks another anniversary of the formation of
Military Reviewin Yandex News
Military Reviewin Google News
20 comments
Information
Dear reader, to leave comments on the publication, you must to register.