December 6 2017
17
A large batch of armored personnel carriers BTR-80 has arrived in the combined arms army of the Eastern District, stationed in the Amur, Jewish Autonomous Regions and the Khabarovsk Territory, reports press office BBO. 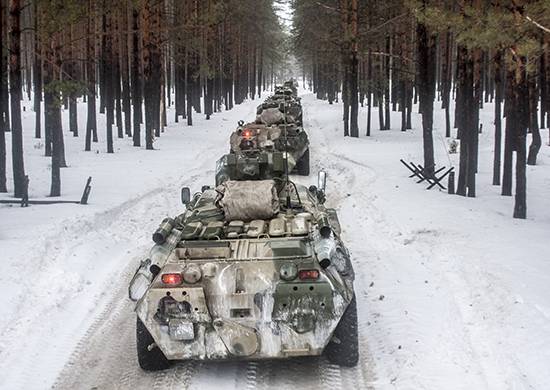 Engineering will be equipped with engineer-sapper units of the army.

“The BTR-80 is a combat wheeled amphibious vehicle designed for the rapid transfer of subunits to the location of the missions, their support from the standard armament and combat from the vehicle. The machine is armed with a large-caliber 14,5 mm KPVT machine gun and a PKT 7,62 mm machine gun paired with it, ”the release says.

It is also reported that “the armored personnel carrier has a system of protection against weapons mass destruction, modern powerful diesel engine with turbocharging and increased maneuverability due to the wheel formula 8X8 ".

Thanks to the use of tubeless tires, the car is capable of “continuing to move and perform a combat mission for a distance of at least 200 km, not only with bullet holes in the wheels, but also when undermining mines,” the press service added.

Universal engine heating system provides all-weather use of armored vehicles. It allows you to start the engine and operate the BTR in winter conditions throughout the Far East.