December 6 2017
76
The doping scandal gained new momentum after the IOC’s decision to remove the Russian national team from participating in the Winter Olympics. Only so-called clean athletes are allowed to perform, but under a neutral flag. WADA informant Mr. Rodchenkov admitted that he now fears for his life. He also talked about his past attempt to make hara-kiri and about his stay in the psychiatric ward. There is no point in concealing this: the informant has already been exposed by Russian journalists. 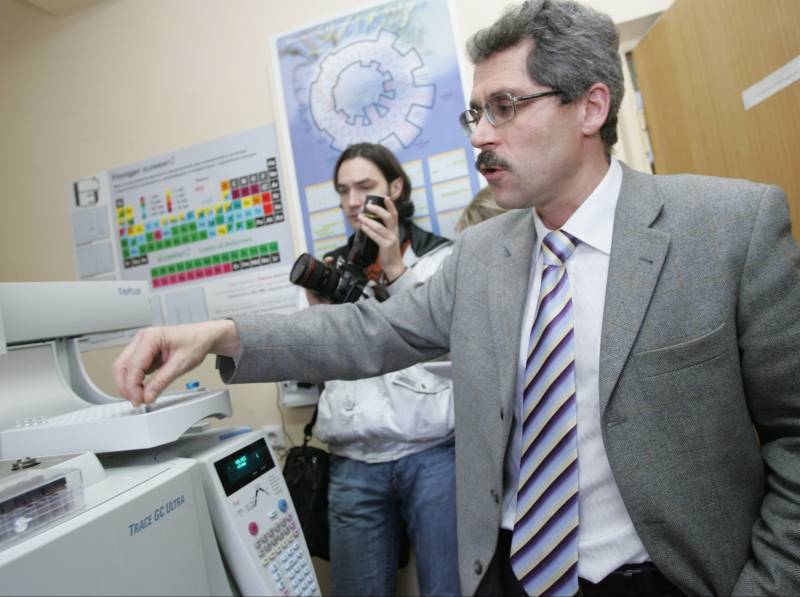 The topic of excluding the Russian team is on the front pages of the world's largest newspapers, on the main pages of the websites of influential publications.

Russia banned from participating in the Winter Olympics. Under this title came the material in "New York Times".

On Tuesday, officials from Olympic sports decided that Russia, as a country, could not participate in the 2018 winter games of the year. The Olympic team of the Russian Federation was excluded from the games that will be held in Pyeongchang (South Korea). Moreover, Russian government officials were banned from being present at the Olympics. Forbidden and show the Russian flag at the opening ceremony. The anthem of Russia will not be heard there either.

However, those athletes from Russia who will receive a special permit to participate in the competitions will be able to arrive in Pyeongchang. But they will have to participate "neutral", not in the form of the Russian Olympic team.

This is the verdict issued by the IOC sports officials. At the conclusion of the "protracted investigation," which "confirmed what was known for more than a year," the International Olympic Committee issued Russia a doping fine. And this kind of punishment turned out to be “so severe that he found no precedent in stories Olympic Games ”, commented on the decision edition.

The IOC resolution finally confirmed that the state is guilty of implementing a broad “doping program.” This scheme may have competed only "with the notorious program conducted by East Germany throughout the 1960-x, 1970-x and 1980-s".

And now the sports world is waiting for the reaction of Russia. Some Russian officials have threatened to “boycott” before. As for Russian President Putin, he continues to publish, he appears to have "predicted" a boycott of the games. All his foreign policy in recent years has been “focused” on the premise that he allegedly “saved Russia from the humiliation inflicted on her by the West after the collapse of the Soviet Union.”

What will the Russian athletes, who consider it clean?

Having banned the participation of the Russian national team, Olympic officials "left the door open to some Russian athletes," journalists remind. Those who have a clear history of testing for doping may ask for approval for games "in a neutral form." A special group appointed by the International Olympic Committee will determine the right to participate for each athlete.

Predict how many people willing to participate in the Winter Olympics "neutral", the newspaper is not taken. However, the authors of the article suggest that under a neutral flag the number of Russian athletes "will significantly decrease." And the whole sports (biathlon, ski), in which Russia has succeeded, but in which "there were violations of doping," can be negated.

At the same time, the publication indicates that Olympic officials made two, at first glance, significant concessions to Russia:

1. Any athlete of the Russian Federation, performing under a neutral flag, will be called an Olympic athlete from Russia. This means a departure from the previous policy of the IOC. For example, athletes from Kuwait who were excluded from the 2016 Summer Olympics in Rio de Janeiro were identified as “independent athletes”.

2. Olympic officials said they could lift the ban for Russia during the closing ceremony. And the national flag of the country can play the role of a “symbol” in the last hours of the games in Phyonchan.

Thomas Bach, President of the IOC, explained that he was worried not only by the fact of fraud in Russia, but also by the way it was done: by “corrupting the Olympic laboratory”, which conducted doping tests “by order of Russia's internal Olympic officials”.

“The decision of [IOC] should draw a line under this destructive episode,” Mr. Bach said at a press conference.

Also, the publication reports that on Tuesday the Russian Olympic Committee was fined fifteen million dollars. The money, as stated, will go through the IOC to international organizations testing athletes for doping and conducting investigations.

Smirnov - the former Minister of Sport of Russia, last year appointed by Putin as head of the national anti-doping commission to restore Russia's reputation in international sport. According to Smirnov, "we want our athletes to be there, and we need a Russian flag and anthem."

Smirnov's calls disappeared in vain. Samuel Schmid, the former president of Switzerland, who was appointed by the Olympic Committee at 2016 to head the commission investigating the results of the investigation commissioned by the World Anti-Doping Agency, is convinced that the punishment announced on Tuesday fully corresponds to what the "two key informants" advocated, whose reports over the past few years “have confirmed Russia's position in world sports”. These informants are: chemist Grigory Rodchenkov, who worked for 10 for years as head of the anti-doping laboratory and was the key person responsible for implementing “fraudulent schemes in Sochi”; Vitaly Stepanov, a former employee of the Anti-Doping Agency of Russia, who “was the first to speak publicly about the nationwide deception” prevailing in the Russian Federation.

“The world knows that in the country where I was born, the doping system stole hundreds of Olympic hopes,” Mr. Stepanov wrote in testimony for the International Olympic Committee. He proposed to “ban” the Russian Olympic Committee for two years or until national anti-doping operations are not re-certified by regulatory authorities. As a result, Russia and its individual athletes will almost certainly miss the 2018 Paralympic Games of the year.

As for chemist Rodchenkov, this scientist lives in a secret place in the United States today. He is under the protection of the federal authorities.

The informant WADA Rodchenkov, we note, is a figure not only quite controversial (he worked in the laboratory for so many years, and suddenly realized that he was doing something wrong), but also mentally unstable. It is probably quite difficult to be an informant for such a person. In any case, WADA and the IOC should approach his testimony with great caution.

According to the website insidethegamesRodchenkov fears for his life. Fears appeared to him after his evidence led to the prohibition of Russia from participating in games.

Grigory Rodchenkov, the site indicates, “is proud” of the decision of the International Olympic Committee, as a result of which Russian athletes can compete in Pyeongchene only as “neutral” participants, but at the same time he is afraid for his life, even if he is in the United States under the protection program witnesses.

Lawyer Jim Walden, founder of the law firm Walden Macht & Haran LLP, said that Rodchenkov would "look over his shoulder for the rest of his life."

According to Mr. Walden, the Kremlin is “a very determined and difficult opponent” for Rodchenkov.

Rodchenkov claims that he led “daily” discussions on the “state program” of doping in Sochi in 2014. The conversations were with Mutko and other employees of the Ministry of Sport of the Russian Federation, including Yuri Nagornykh (former Deputy Minister of Sport). Now Mutko and the Nagorny are suspended for life from the Olympic Games. The IOC Commission, headed by S. Schmid, confirmed the “systemic manipulations” of the anti-doping results in Sochi - 2014.

Walden said that the IOC’s decision to ban Mutko and Nagornyi’s is “quite appropriate”, especially given “their direct participation in the oversight and financing of the state-sponsored doping system”, as well as “the refusal of the Russian Federation to cooperate” and “threats of retaliation” to Rodchenkova.

After exposing the Russian doping program in an interview with the New York Times in May last year, which led to the investigation of WADA, Russia declared Rodchenkova an outcast and a liar, the evidence of which should not be believed, the newspaper writes. The scientist received threats from the public: some even called on him to “shoot for his lies” —that’s what Stalin would have done.

Rodchenkov, "forced to flee Russia" in fear of the government, says he considers himself "innocent". He believes that the decision of the IOC Executive Council, announced after the meeting in Lausanne, "makes it very clear to Russia and all countries that serious consequences will come for those who violate the rules of the international community."

However, because of what "consequences" Rodchenkov himself fled abroad? Is from Putin and the FSB?

If you read carefully Oleg Lurie blog, who conducted his own investigation of Rodchenkov's chemical activity, the picture will turn out quite different.

Investigative Committee of the Russian Federation. 12 February 2011 of the year. A criminal case was opened against Marina Mikhaylovna Rodchenkova, sister of Gregory. Article: illegal possession and sale of drugs. 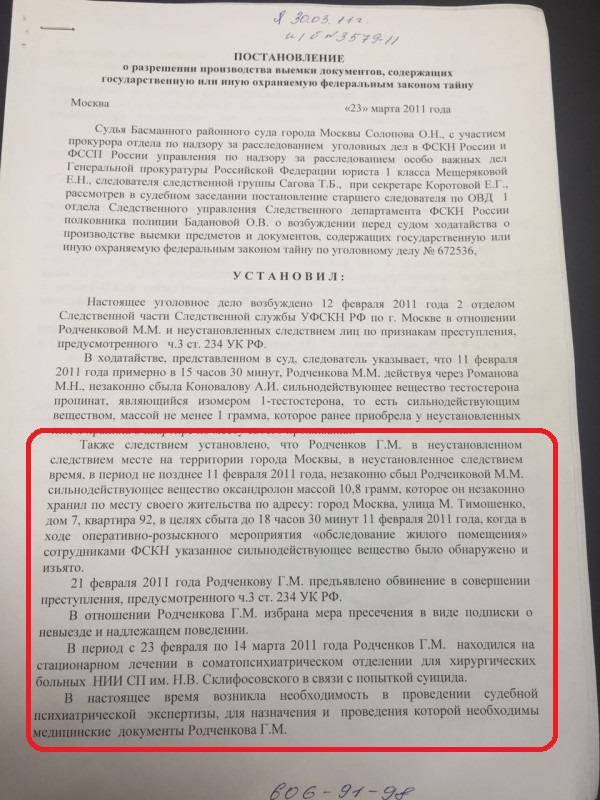 Within the framework of the case it was established: the brother supplied the drugs to his sister. It was he who took the illicit drugs, taking advantage of his official position. “Thanks to Grigory’s work at the anti-doping center,” writes Lurie, “the family drug business has blossomed and smelled. Caught not only in the sale and storage of drugs, but also in excess of his authority, Grigory Mikhailovich fell into stress, which led to the activation of mental illness. ”

And then there was a suicide attempt at the Sklifosovsky clinic.

28 February, the head of the Anti-Doping Center, Grigory Rodchenkov, who smelled of alcohol, was admitted to the Sklifosovsky clinic with a stab wound to the left side of the chest. This wound was inflicted on him by Kremlin non-hirelings - the drunken Rodchenkov tried to kill himself.

In the hospital Rodchenkova diagnosed not only surgeons. There was also a psychiatric diagnosis: a depressive episode of a severe degree with psychotic symptoms. 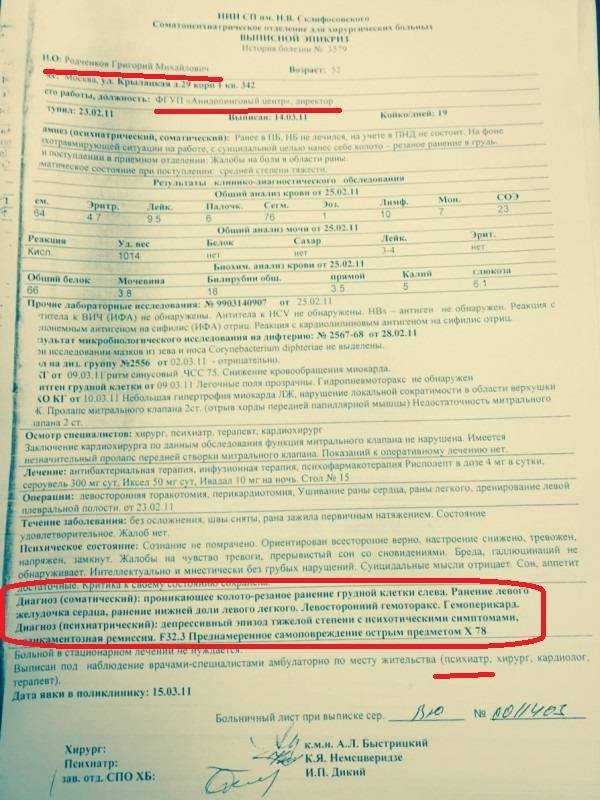 Actually, Rodchenkov himself does not hide his state at that time. “You know that I am also a man from the other world, I almost killed myself,” he quotes "Lenta.ru". - I made myself hara-kiri. If I kept the knife differently, I would have fallen into the right atrium. I managed to take. I would have gone a centimeter to the left, I would have simply choked on my blood, because I would have pierced my lung and both ventricles of my heart. ”

As for the psychiatric ward, he liked it there. This is a “wonderful” place “for common development”:

“It’s a wonderful place for general development, by the way.” So the kitchen closed at six o'clock. Naturally, at nine in the evening, in three hours, everyone wants to eat terribly. There is still an hour before the end of the day, they begin to rustle and get “Doshirak” from every corner. ”

Well, and you say - a traitor to the Motherland, shoot and so on! Just crazy with a bottle, got into Russia under the article. Psycho, who held a high position, later came up with a way to move to the United States and talk about the fear of the Russian government there.

Such is the stroke to the portrait of the "informer".

Ctrl Enter
Noticed oshЫbku Highlight text and press. Ctrl + Enter
We are
Russian sport "in neutral status", or WADA against RUSADATheir fate will be decided by others.
76 comments
Information
Dear reader, to leave comments on the publication, you must to register.