The proposed cycle of articles is intended for a wide range of military enthusiasts. stories and stories aviation and reflects the stages of the emergence (during the First World War) and the development of a special class of hydroaviation - aircraft for submarines, as well as their carriers - aircraft-carrying submarines and submarine aircraft carriers during the interwar period and during the Second World War. Particular success in this direction was achieved in Japan, where by December 1941, as part of fleet there were special-purpose submarines with airborne reconnaissance aircraft.

A little known fact, but it is on-board a seaplane reconnaissance "Kugisho» E14Y1 (code name "Glen"), launched from aboard the submarine-I of 7, the day before, prior to the application in December 7 1941, the epoch-making impact of the Japanese carrier-based aircraft fleet on the American base in the Bay Porl- Harbor and other objects on the island of Oahu, made additional exploration purposes. His flight went unnoticed by the Americans, and the plane returned safely to its carrier. 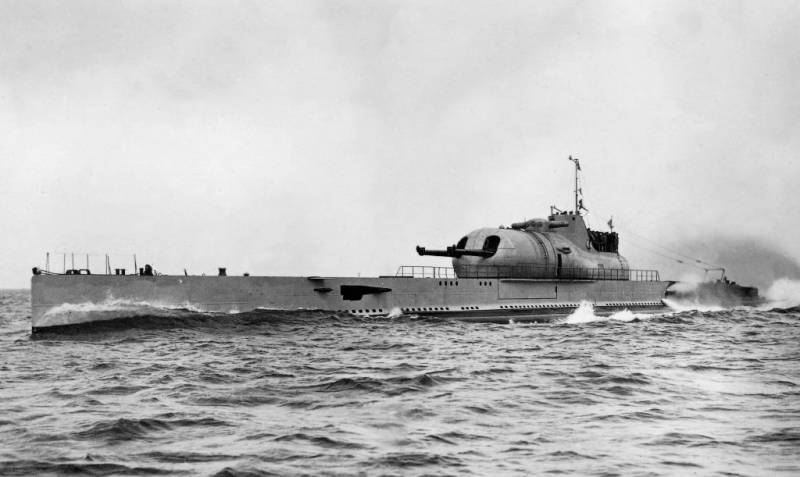 In 1929, the underwater artillery cruiser Surcouf (displacement 2900 tone) was launched in France. The submarine was armed with two 203-mm guns, and in the aft superstructure equipped a hangar with a length of 7 meters and a diameter of 2 meters for reconnaissance seaplane. 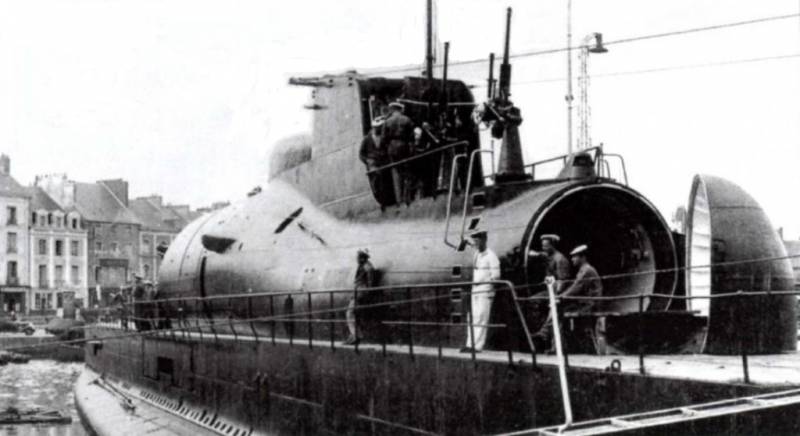 "Surkuf" entered service in the 1934 year and initially carried on its board a single Besson float monoplane (Besson) MW.35. With an engine in 120 horsepower, the MW.35 developed the maximum speed in 163 km per hour and the practical range of the flight 300 km.

Prototype of the Besson reconnaissance seaplane MW.35 on trial, 1927 year

After the collapse of the prototype MW.35 in 1933, a more perfect two-seat float-operated hydroplane “Besson”, MW.1935 “Petre” (Petrel) was placed on Xyrinx in the year of 411. Equipped with a more powerful 175-powerful engine, the Petre developed a maximum speed of 185 km per hour and had a range of 650 km. 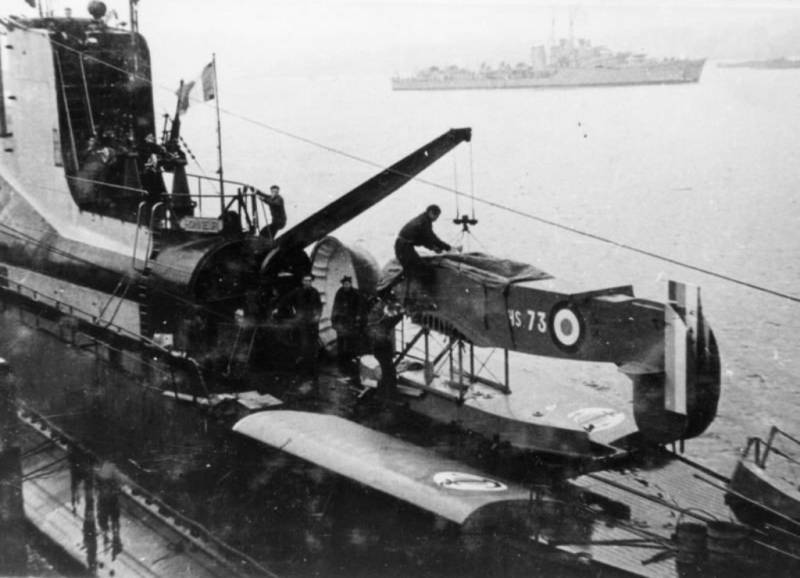 Besson reconnaissance seaplane M.V. 411 “Petre” aboard Syurkuf is being prepared for deployment in a hangar (the wings have already been dismantled)

For placement in the aircraft hangar at the MV.411 the consoles were dismantled and the floats were folded. The time for assembling and preparing for takeoff of the MW.411 “Petre” was only four minutes. The takeoff was carried out from the water, where it was lowered by a crane and lifted back on board after landing. A special shaft connected a waterproof hangar with a solid hull, which made it possible to begin pre-flight preparation of the aircraft even before the submarine emerged on the surface (as on the British submarine M-2).

The surface cruiser “Surkuf” in its surface position had a cruising range of up to 12000 km and autonomy for 90 days. Its main purpose was cruising operations in remote ocean communications and the protection of French overseas territories. France capitulated in 1940, but Surkuf was able to avoid the “German captivity” and 18 June to go to the English port of Plymouth. After repair, the submarine cruiser was sent to Canada, where it provided wiring for convoys.

Based on it, the CF-411 "Petre" was the only European submarine-based aircraft, which took part in the Second World War. In 1941, during the bombing of Plymouth, Petre received heavy damage and did not return to board its carrier. “Surkuf” tragically killed 18 February 1942 of the year in the area of ​​the Panama Canal during the transition to the Pacific Ocean (presumably after a collision with US military vehicles).

In Italy, they also decided to try out in practice the idea of ​​aircraft-carrying submarines. In April, the submersible cruiser “Ettore Fieramosca” (Ettore Fieramosca) was launched with a displacement (underwater) of about 1929 tons. At the rear of the superstructure, a cylindrical watertight hangar (as on a “Surkuf”) was equipped for a reconnaissance seaplane. 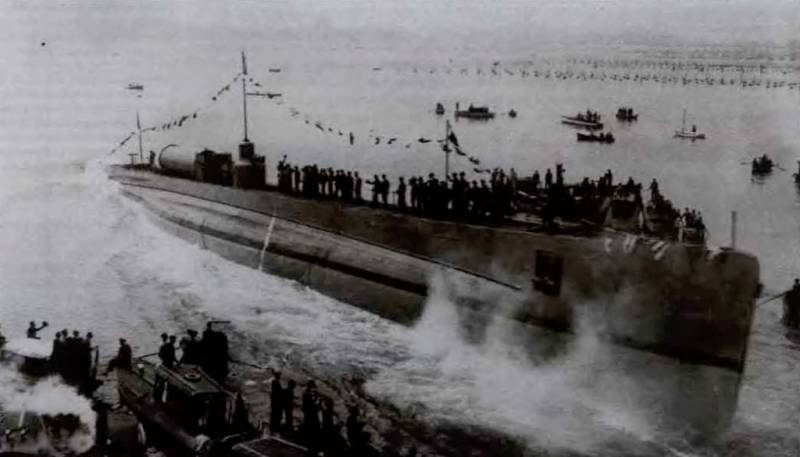 Italian submarine cruiser “Ettore Fieramoska” during the launch of 15 on April 1929 of the year, behind the cabin a cylindrical hangar for a seaplane is clearly visible

For placement on the submarine cruiser the Rinaldo Piaggio company in 1928 built a single-seat float-operated hydroplane “Piaggio” R.8. Equipped with an engine in 75 horsepower, the aircraft could reach a maximum speed of 135 km per hour (cruising speed was only 102 km per hour). The flight distance was 320 km. 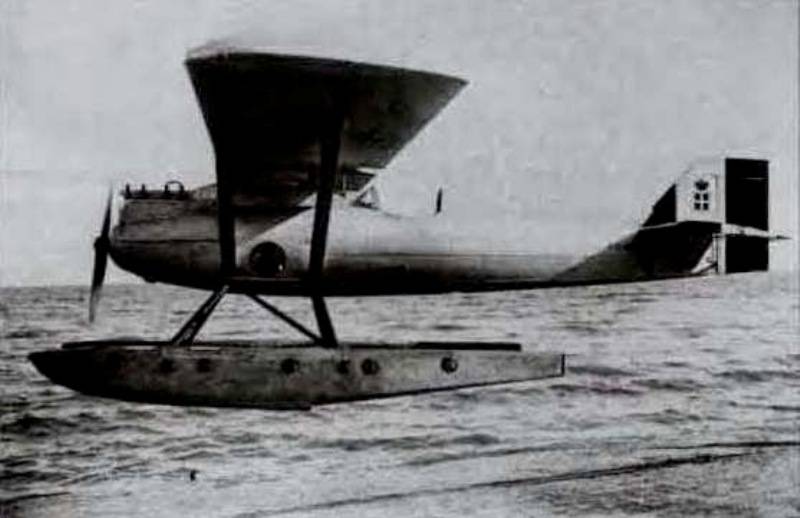 In the same year, Mackey presented its version of a reconnaissance seaplane for Ettore Fieramoska, a single-seat low-end Mackey (Macchi) M.53. Equal in power, the 75-strong engine provided the M.53 with a slightly larger maximum flight speed of 144 km per hour. In the boat aircraft hangar, both seaplanes were disassembled. However, the built prototypes for their intended purpose were never used. 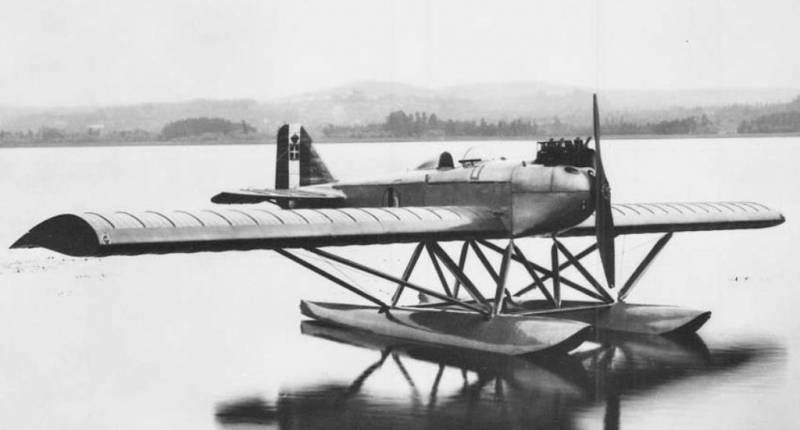 During the sea trials, “Ettore Fieramoska” quickly found out that the aviation hangar, which had a large buoyancy reserve, did not let the submarine cruiser go under water. Before being put into service in 1931, the hangar from the submarine was dismantled. In the future, similar experiments in the Italian navy were not conducted.

In the USSR, in 1933 – 1934, by designer I. Chetverikov. a reconnaissance seaplane was designed and built for submarine basement (in duplicate). The aircraft received the designation SPL (C - special, submarine - for a submarine). 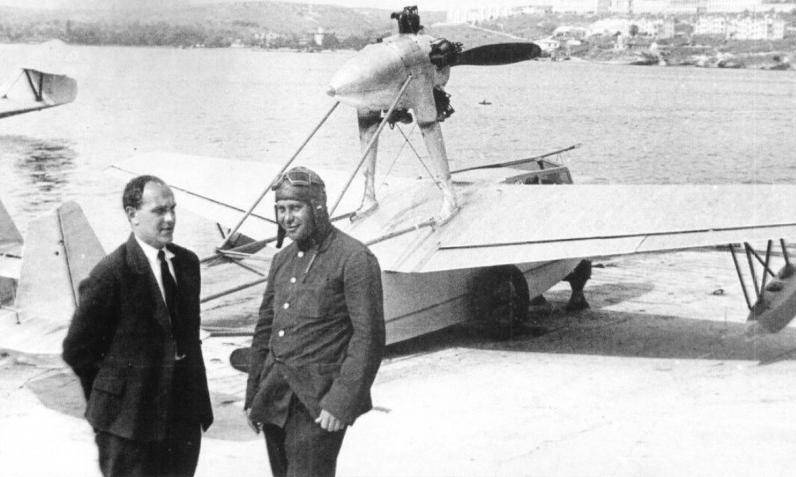 The first copy of the CPF seaplane in the summer of 1934, successfully passed flight tests. The single-flying boat was equipped with a horsepower X-NUMX radial piston engine M-11, which provided the maximum horizontal flight speed of 100 km per hour. The flight range of the CPF was 186 km, and the practical ceiling was 480 meters. The plane could be in the air for two and a half hours. 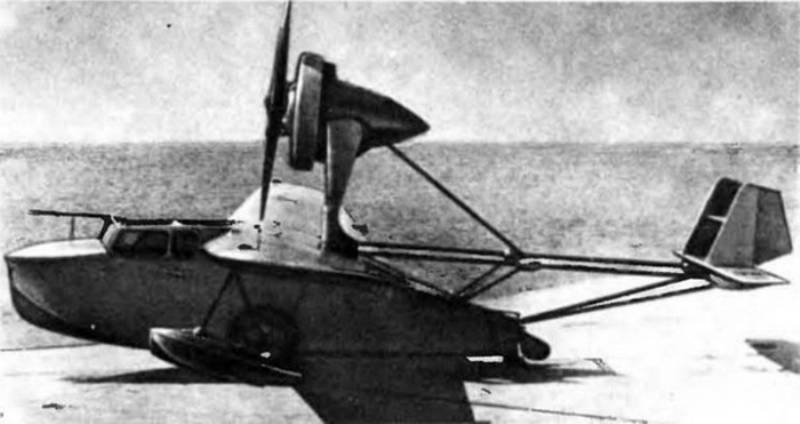 The second copy of the CPF received folding along the sides of the wing console and a rotary nacelle of the engine, when folded, it overturned back. This provided a seaplane with a length of 7.45 meters, a wingspan of 9.65 meters and a height of 3.05 meters, when folded, they could be placed in a container with a diameter of 2.5 meters and a length of 7.45 meters. The folding of the CPF took 3 – 4 minutes, and the reverse preparation for flight took place within 4 – 5 minutes. In the course of sea trials taking place on the Black Sea near Sevastopol, the hydroplane showed low seaworthiness. 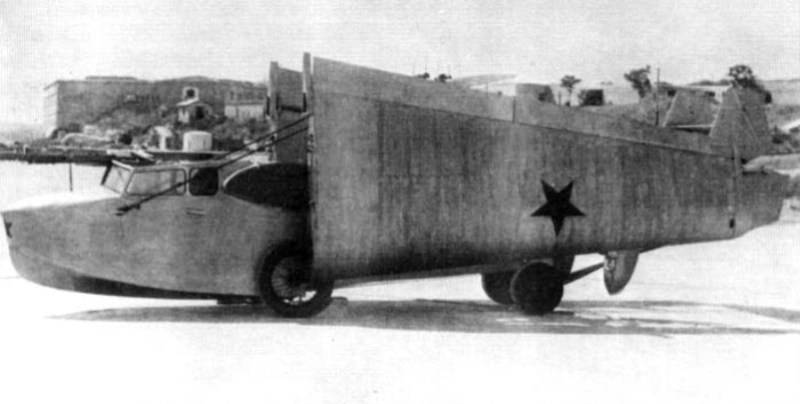 According to the project, prepared for the flight and standing on the deck CPF was supposed to be in the water when the submarine was immersed. The return of the seaplane to the submarine cruiser was to be in the reverse order. However, according to the experience of experiments conducted in the USA on the S-1 submarine in 1923 – 1932, it became clear that without special equipment - a lifting crane, it would be extremely difficult to carry out lifting aboard a plane.

Before the joint tests with a submarine equipped with an appropriate cylinder-hangar, the matter did not come, since it was decided to abandon the installation of such a hangar on the submarine. In 1935, the Naval Academy concluded that it was inexpedient to build submarine cruisers with aircraft armament and powerful artillery systems in the Soviet Union (similar to the French "Surcuf"). The project "SPL" was closed.

Before the beginning of the Second World War in Nazi Germany, they began to develop a project for an XI series submarine cruiser, for which the aircraft manufacturer Arado (Arado) was assigned to develop a reconnaissance seaplane. 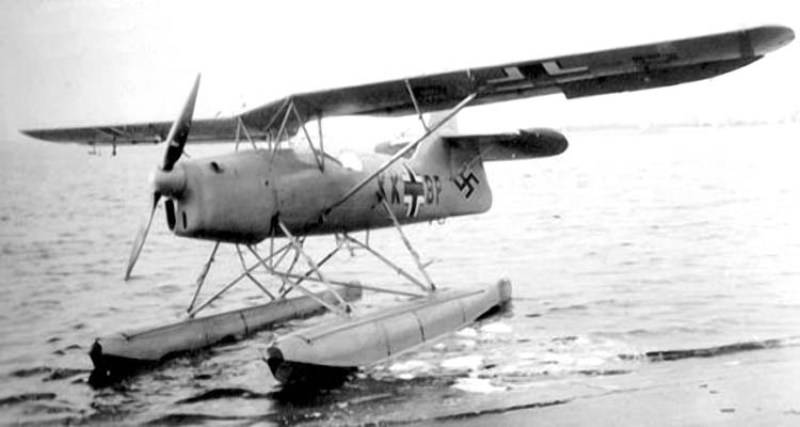 The float seaplane “Arado” Ar.231 made its first flight in 1941 year. A single monoplane (take-off weight 1051 kg and engine power 160 horsepower) could develop a maximum flight speed of 170 km per hour (cruising - 130 km per hour), and also had a flight range of 500 km. For placement in a cylindrical hangar with a diameter of 2 meter wing wing folded, and the floats are disconnected. Preparation of the seaplane for departure was carried out in 10 minutes. 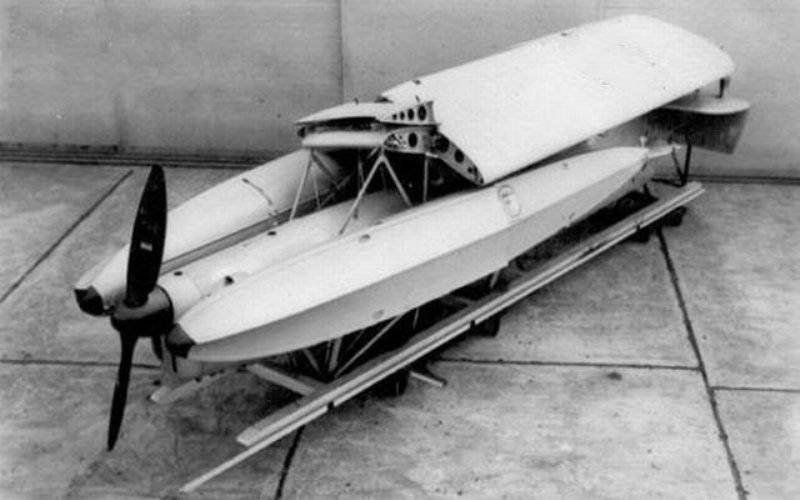 With the outbreak of hostilities, the command of the German fleet refused to build large submarine cruisers of the XI series in favor of conventional torpedo boats. The Ar.231 proved to be unsuitable for use on the Arado surface ships - the weak design could not withstand multiple launches from the catapult. The low seaworthiness of the seaplane appeared on the tests. It was built only four prototypes. The short combat career of two of them on the auxiliary cruiser-raider "Stir" ended with his death in September 1942, off the coast of Brazil. From the "Stir" Ar.231 was lowered onto the water by crane, they were also lifted aboard after the flight. 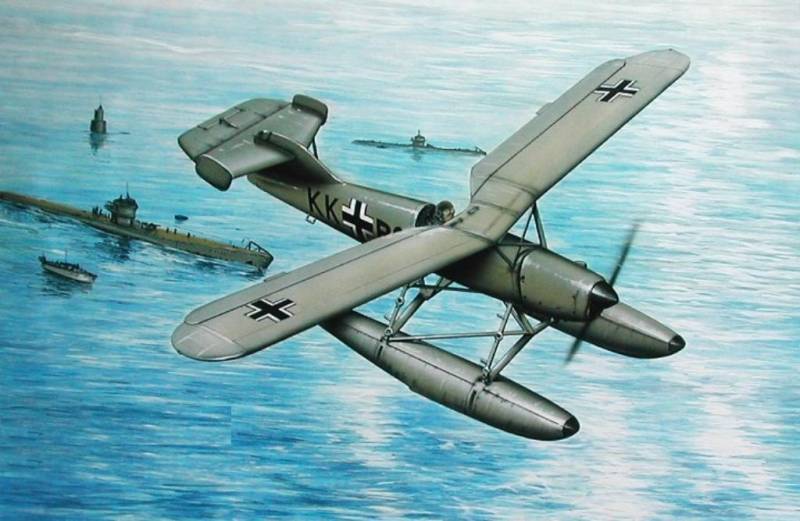 As an alternative, the Germans decided to use the Focke-Achgelis fascist-autogel (Facke-Achgelis) Fa-1943 under construction from 330 with a small series for conducting aviation reconnaissance onboard submarines. 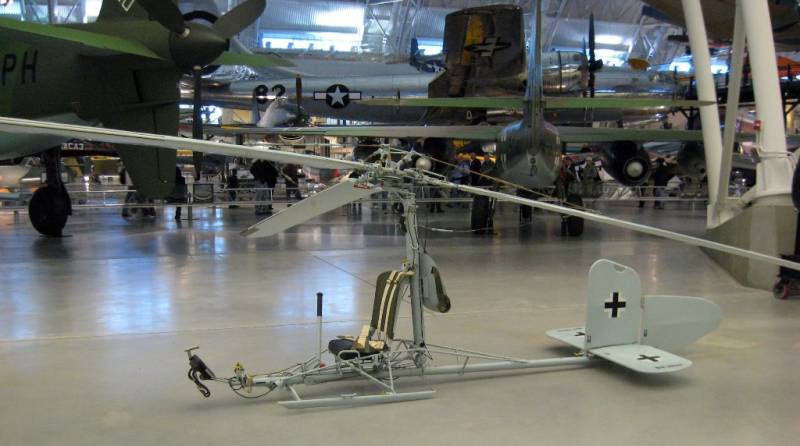 Disassembled, it could be stored in three small sealed containers and assembled by a team of three people for 5 – 10 minutes (disassembled for 2 minutes), the weight with the pilot was about 200 kg. Compressed air was used to spin the rotor. The Fa-330 was towed by a submarine going at maximum speed against the wind by means of a cable-cable. The height of the rise averaged 100 – 120 meters (the viewing distance was over 35 km). The pilot could descend from the maximum height (150 meters) to 10 minutes. At this time, the submarine could not actively maneuver and was extremely vulnerable to the enemy. It was possible to use Fa-330 only during the day and in good weather. German submariners did not experience any special attachment to the Wormfish (informal name Fa-330), they were rarely used, mainly in the Indian Ocean basin from submarines of the IXD2 series with a displacement of 1760 tons. 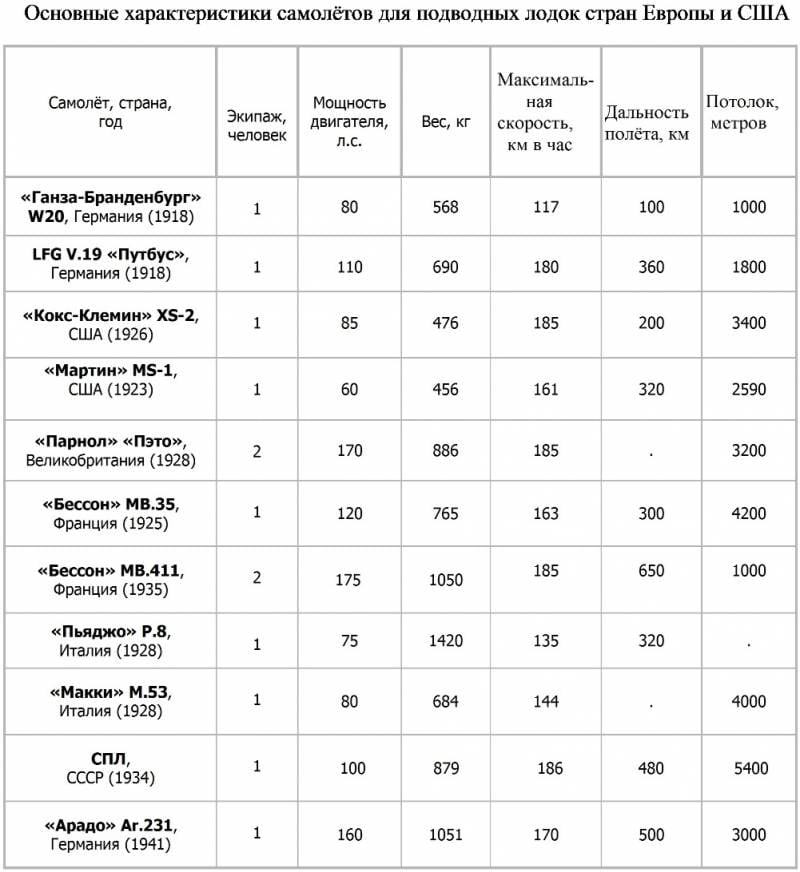