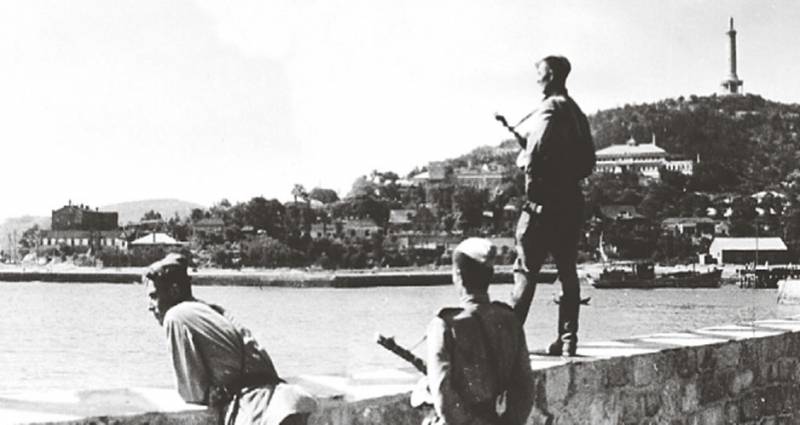 On December 8, 1947, the US-China Naval Agreement was signed. navy”, Which actually envisaged the use of China in the forthcoming US aggression against the USSR. Moreover, the validity period of the document was not specified.

70 years ago, Washington was actively preparing Chinese - as part of the Far East - a springboard for attacking the USSR using atomic weapons. It could start from the naval bases of China and in general from the territory that was under the control of the Kuomintang. More precisely, for the time being they were held under the blows of the PLA, supported by the Soviet Union.

Washington’s policy stemmed from the notorious Truman Doctrine, announced in March 1947 of the year and aimed at active opposition to our country in all azimuths. Subversive work against the USSR and its allies was already being carried out, plans for an atomic war against the Soviet bloc were being prepared (“Truman's Testaments Are True”).

By the end of 1947, the Communists controlled more than a third of China’s territory, despite increasing US assistance to the Kuomintang troops. Moreover, in the south, PLA was approaching ports near the Philippines - a citadel of the US military presence in Southeast Asia since the mid-10th century. In addition, France handed over to China at the end of 40 the Guanchouwans naval base, an exclave on the southern coast of China near Hainan Island. The possible transition of the Navy to the control of the Communists did not suit the United States, so in 1946, negotiations were under way to transfer the "Guangzhou" to the control of the Americans. Chiang Kai-shek insisted on the transfer of China to the Celestial Empire, but the political and economic dependence of Kuomintang China on the United States increased. Washington’s atomic strike plans for the USSR, developed in 1947 – 1946, envisaged its application from the Far Eastern countries.

All of these factors led to the signing of the 8 December 1947 of the US-China agreement On the Navy. It essentially eliminated China’s sovereignty in matters of defense and territorial integrity. The United States received exclusive rights to the naval bases of the Middle Kingdom and control of its Navy. American warships could be in the territorial waters and ports of the country arbitrarily. In case of a threat to the security of the United States, China and allied countries, all restrictions were lifted.
According to available data, the Kuomintang authorities, in the development of the agreement, agreed with Washington on the introduction of American troops in the event of an increase in Soviet support for the PLA. The Navy planned to create US Navy strongholds for the war with the USSR.

The agreement of 8 December preceded the end of the development of a new plan for the US war against the USSR - "Grabber." This document, approved by the Joint Chiefs of Staff, differed from previous ones (1945 – 1947) in that it proceeded according to the preamble from the possibility of starting a war at any time and with a surprise factor: the warning period will be very short or will not exist at all. The basis of the plan, as well as previous developments, is the use of atomic weapons. Nuclear strikes were supposed to begin no later than two weeks of entry into the war. The United States intended to apply them from bases in the UK, Pakistan, India and on Okinawa, Japan. The possibility of attacks from other territories in Asia or Europe, if necessary, was noted.

However, the rapid advance of the PLA, coupled with the successes of the armed anti-colonial struggle in French Indochina, forced Washington to come to grips with this region and Taiwan in the spring of 1948 in order to avoid their transfer under the control of the communists. The military technical and financial assistance of the USA to Thailand, the Philippines and South Vietnam increased accordingly, and American military bases expanded there. In 1950, they also appeared in Kuomintang Taiwan.

Meanwhile, by the end of the 40s, the role of the European and Turkish bridgeheads had sharply increased in Washington’s aggressive anti-Soviet plans. The main reasons for this are the Berlin crisis of 1948 – 1949 and the conclusion of treaties on military mutual assistance between the USSR and almost all Eastern European countries.

The implementation of the US-China agreement was paralyzed thanks to the successful combat operations of the PLA, combined with the strengthening of the grouping of Soviet troops in Port Arthur and Dalny. Based on a combination of factors, Washington had to abandon the Gruber plan.

But the region is still on sight at the Pentagon. The US military presence in the South China and Japan Seas is growing, and the arsenals of the satellites are being pumped with American weapons.