The defeat on points 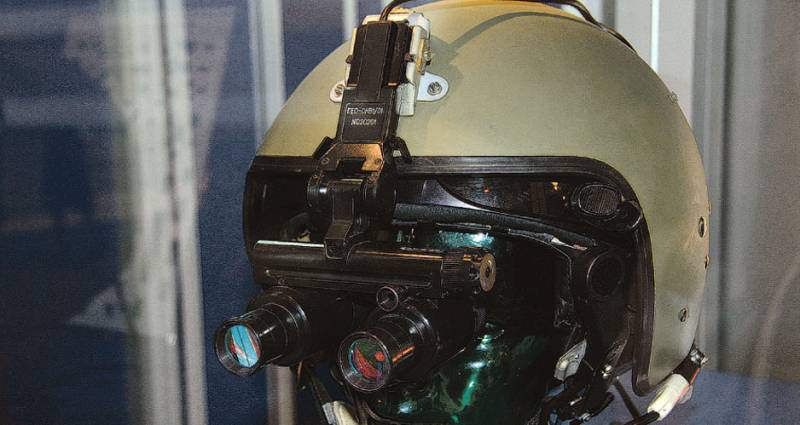 From 20 to 23 in November, Vladimir Putin held a cycle of meetings at the Bocharov Ruchei residence in Sochi with the leadership of the Ministry of Defense and the military-industrial complex, which became the tenth in a row. According to the head of state, “this practice, and we have been holding meetings in this format for the fifth year, has proved its relevance.”

“According to the results of the discussions that took place, more than 360 instructions of the president were given, their execution was under special control. This made it possible to more clearly coordinate the work and tasks of the development of the Armed Forces and the defense industry, increase the responsibility of defense enterprises for the fulfillment of the state defense order and most importantly ensure a systematic increase in the capabilities of the Armed Forces, ”stated the President.

At the meetings held by the President of the Russian Federation, issues related to the assessment of the use of Russian weapons in Syria were constantly considered. “The work of the newest aviation complexes such as Su-30SM, Su-34, Su-35, Mi-28 and Ka-52 helicopters, ”Vladimir Putin said at one of the meetings. And with the Supreme, presumably, the Commander-in-Chief of the Aerospace Forces (VKS), Colonel-General Viktor Bondarev, a constant participant in nine such cycles of meetings with the head of state, completely agreed. Viktor Bondarev did not take part in the current cycle, since at the end of his service he was sent to retirement in not the worst place - parliament, becoming chairman of the Federation Council Committee on Defense and Security.

And here the newly appeared senator saw the light. It turns out that the Syrian campaign revealed glaring flaws in night vision goggles (NVG) of the Mi-28H pilots. They are, according to the senator, called the NVT "death to pilots". “When it is cloudless, everything is fine, as soon as some kind of smoke, the pilot then goes for three days with red eyes,” Bondarev said at a meeting on the legislative support of the work of the military-industrial complex. According to the ex-commander-in-chief, the Ministry of Defense does not sufficiently finance design developments.

What can you say? “The giraffe is big, he knows better ...” However, the senator’s revelations are not consistent with the estimates of the use of Mi-28H in Syria, expressed by President Vladimir Putin, Defense Minister Sergei Shoigu and his first deputy - Chief of General Staff Valery Gerasimov. In Syria, as well as in all units of the Army Aviation VKS and abroad, where the Mi-28HE are delivered through Rosoboronexport, they are used at night only with their NDCs, who in fact received high marks from both Russian and foreign pilots.

Indeed, 12 on April 2016 of the year in Syria crashed the Mi-28Н (“Error“ Night Hunter ”). Two crew members died. This loss since 30 September 2015, when, at the request of the Syrian President Bashar al-Assad, the operation of the Russian VKS in Syria against militants began, is so far the only non-combat nighttime loss of the Mi-28Н. The ex-commander probably knows the causes of the catastrophe for sure, which the Russian Defense Ministry explained as the crew lost their orientation in space during a dark night flight over an unoriented terrain with difficult terrain. The crew then piloted the rotary-winged car wearing glasses X-VUMX X-VUMX X-VUMX, which could not be compared with the modern 1 + GV-X flight pilots of the GEO-KHN90-3M generation (for Mi helicopters) and GEO-ONV1-01К (for Ka), developed and mass-produced by OAO NPO Geofizika-NV. According to the results of the investigation, all subsequent flights in the “Scoop” type glasses were immediately banned.

This, as well as other problems of the use of Russian weapons during the antiterrorist operation, was invariably discussed during the above-mentioned meetings with the head of state. From the very beginning, representatives of not only field repair brigades, but also design bureaus and scientific institutions constantly worked on the Syrian theater. “Their work was, frankly, interesting and timely, and very effective. Much was managed to be corrected in the course of applying the newest weapon systems in combat conditions, ”Vladimir Putin stressed on November 20.

The main features of any night vision technology on 90 percent are determined by the characteristics of an electron-optical converter (EOC) used in their composition. At the end of the last century, it was possible to dramatically increase the capabilities of night-vision devices (NVD) by creating the third generation on the basis of new physical and electro-optical equipment, whose basic parameters are about three times higher than those of its predecessors. Only two countries - Russia and the United States - have mastered the serial production of such EOCs, two enterprises each, including ours - Geofizika-NV.

“I want to note that the comprehensive modernization and rearmament of the army and fleet go systematically. The defense industry enterprises quickly solve the most acute production problems. Yes, of course, there are still problems, but without this it is impossible, they will always be, it is important only to respond to them in a timely manner. But in general, it should be noted that the defense industrial complex fulfills its obligations on state defense orders, ”Putin said at the final meeting on the resource support for the technical re-equipment of the Armed Forces. As a result of the implementation of the presidential decrees of May 2012 (No. 603 and 604), the level of equipment of the troops with modern weapons managed to increase almost four times, today it is 58,9 percent. New weapons showed high efficiency and reliability in Syria. First of all, this applies to aircraft technology and long-range precision weapons. In the near future, the equipment of modern weapons and equipment is planned to be brought to the level of at least 70 percent, and the serviceability is not lower than 90 percent.

In accordance with the US export legislation, the supply of EOP generation "3 +" to third countries is prohibited with the exception of samples with low parameters, so European and Asian firms are forced to produce night visions on an outdated basis. As a result, such devices are significantly inferior to modern Russian and American.

What in such cases it is customary to do to promote their products to the markets of modern night vision equipment, where in the last 20 years firms from the Russian Federation and the USA have dominated? To engage in misinformation during marketing campaigns. And our competitors began to declare that their products based on EOP generation "2 +" surpasses the latest Russian and American night vision devices and provides a record range for ground targets. As a result, several customers were misled because the flight NVGs are not designed for the use of weapons, but for taking off, landing on unprepared sites and orientation in space when piloting helicopters at night. For detecting and recognizing targets and aiming weapons, aiming gyrostabilized optoelectronic stations (GOES) are used with thermal or television systems that have an 20 angular field times less than the pilot ONV, and therefore their range is four to five times. more.

As the commander-in-chief of the Russian Aerospace Forces, Viktor Bondarev declared: while aboard the French “night” helicopter, he observed a tank at a distance of 2 kilometers in the CNV-12 flight crew. Geometrical size however tank at the photocathode, the image intensifier tube will be five microns, this is the level of hardware error, it is impossible to make out such an image in the NVG. Moreover, the general did not say at what level of natural illumination and transparency of the atmosphere such a range of French glasses was achieved.

For comparison, real examples can be given when Russian pilots of special flight tests of the “GEO-ONV28-1М” type flying in the mountains of the Mi-01H, with the level of natural illumination from the starry sky, clearly observed Elbrus at a distance of 110 – 120 kilometers, when flying using GEF-type “GEO-ONV1-01K” in the sea, the Ka-226T crew found a small-sized boat at a distance of 38 kilometers.

Why does the ex-commander have red eyes? 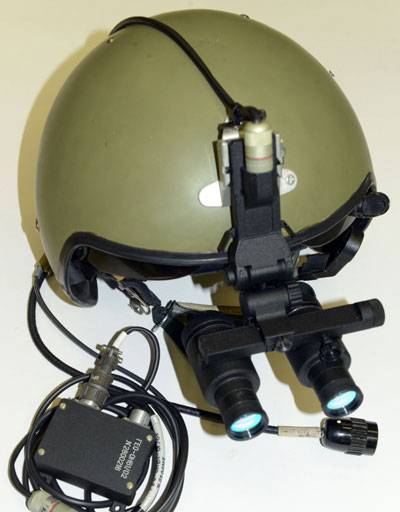 The range of action of the NVGs depends on how well the in-cabin lighting and external lighting equipment of night helicopters is adapted, since the lights of the flight instruments and signal boards located in the immediate vicinity of the highly sensitive EOC of the latest generation are a powerful source of interference. For safe piloting with the use of NVG, special requirements have been developed for spectral, color and energy parameters, characteristics of sources of indoor lighting and external lighting equipment, which are reflected in the military standard GOST RV 5855-002-2010. In this regard, Russia is firmly leading in the world. Even the American pilots currently operating our Mi-17В-5 helicopters delivered through Rosoboronexport JSC in Afghanistan praised the quality of adaptation of American-made lighting equipment, which was conducted by Geofizika-NV, as the “best of what they have ever seen. ”

As the EIRSHOW-2017 international air show from the representative of the American delegation became aware, the Pentagon, despite the sanctions against Russia, is implementing a project to acquire military transport helicopters Mi-100 for the Afghan Air Force around the world. They will be subjected to a major overhaul at factories in the Czech Republic (Prague), Slovakia (Trencin) and Bulgaria (Plovdiv). Naturally, their lighting equipment must be adapted to the use of modern CIA. And the Americans want this, as is the case with the Mi-8В-63 helicopters previously delivered to Afghanistan, by Russian specialists.

As for the red eyes from the use of NVG, as senator Bondarev told, it is true that recently there are complaints. This problem was encountered at the beginning of 2000-x, when trials of pilot ground-breaking gangs of the GEO-ONV1 type were completed based on the third-generation image intensifier tube and goggles were taken to supply the Russian Air Force. But at the same time there was no regulatory framework governing their use. The solution of the problem was entrusted to the State Scientific and Research Testing Institute of Military Medicine (GNII VM) of the Ministry of Defense of the Russian Federation. Experts have identified the main causes of pain in the eyes after applying the NVG: improper adjustments relative to the eyes and a long flight time at night with glasses. Recommendations for use are reflected in the combat training course of the military aviation personnel. For more than a decade period of application of ONV of the type “GEO-ONV1” it has been established that, subject to the implementation of the recommendations of the State Research Institute of Influence of the Russian Defense Ministry, there are no problems.

The manual for flight operations (MFR) for the Mi-28H helicopter contains detailed instructions to the pilots on what should be done in cases where the CRO suddenly fails, if the flight conditions become more complicated and the possibility of observing behind the cockpit space has deteriorated. In these cases, in order to eliminate the effect of the so-called human factor and prevent it from getting into the flight accident, the crew must act strictly according to the instructions of the RLE. And about them ex-commander in chief, as you can understand from his revelations, forgot.