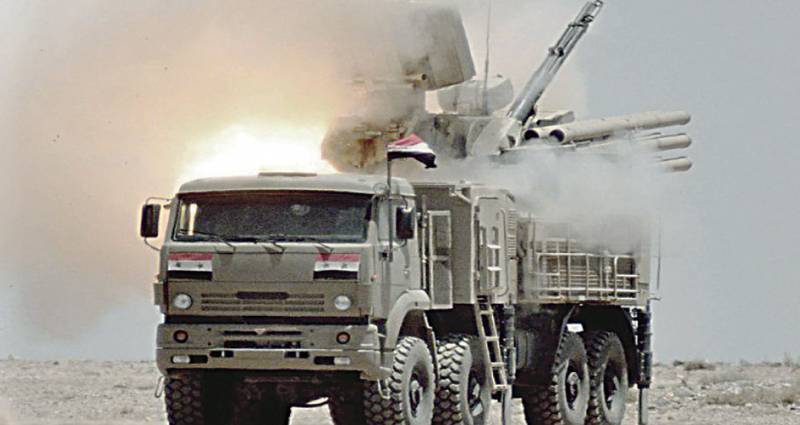 On the night of 1 on December 2, the Israeli military launched another attack on targets in the Damascus area. At the same time, Tel Aviv changed its tactics for the first time. The Israeli military expected opposition, so the first strike was inflicted on the positions of the Syrian air defense forces, and the second - on the object.

Further events turned out to be quite unexpected. The first to make statements were the official representatives of Damascus. According to their information, the blow was successfully reflected, although the object received some damage. On account of the Syrian military - two shot down missiles.

Never been and here again

Damascus habitually refused to name the target of the missile strike. At the same time, Tel Aviv continued to keep its traditional silence. But on the night of 3, Prime Minister Benjamin Netanyahu made a statement: Israel will not allow the Iranian regime, seeking to destroy the Jewish state, to acquire a nuclear weapon. Moreover, "we will not allow this regime to gain a foothold militarily in Syria."

Tel Aviv’s last major strike in the Damascus area was a little less than three years ago. 7 December 2014, the Israeli air force launched several cruise missiles at targets in the Syrian capital and near. The event received the unofficial name of "Rocket Storm". Then Syria's air defenses reflected the blow, and since then Tel Aviv tried to avoid targets in the vicinity of Damascus. But last fall, the situation began to change. The Israeli Air Force began to probe the air defense of the main city of Syria.

It covers quite numerous, but far from the most modern means of air defense. The basis of the defense is the Soviet complexes C-125 and C-75. Nearby are the positions of long-range C-200. In this case, the Syrians have a trump card in the sleeve. These are the newest Russian Buk-M2E air defense systems and the Pantsyr air defense system. True, due to their small size, they will not be able to close the entire territory of the capital and suburbs. Therefore, control the direction from which there may come a great threat.

Since the beginning of the operation in Syria, Russia has made some efforts to modernize the local air defense. Repair with partial modernization of long-range C-200. What works were carried out is not known for sure, but over the last year the renewed “two hundred” brought unpleasant surprises to Tel Aviv. In particular, in March they fired F-16I planes that had struck an airstrike. A volley was made in pursuit and anti-aircraft missiles caught up with their targets already in the skies of Israel. For their liquidation, Tel Aviv used the newest Arrows, anti-missiles Arrow. In October, according to an official statement from Tel Aviv, the Air Force attacked the positions of the C-200 division. Earlier, the calculations of this unit allegedly fired on the Israeli Air Force combat aircraft in the skies of Lebanon.

Tel Aviv intensified activity in the Damascus area in September. Drones appeared in the sky, and electronic reconnaissance aircraft began to fly into the Lebanese sky more often. Even the Russian side has noted this perception. Indeed, in the area of ​​Damascus and the Syrian-Israeli border there are two battalions of the military police of the Armed Forces of the Russian Federation.

It can be assumed that Israel was clearly preparing for some large-scale actions. Apparently, the Israeli military studied the features of Damascus air defense and looked for ways to get around it - previous experience showed that the traditional tactic of a quick missile strike from the sky of Lebanon no longer works. First, it is necessary to at least partially suppress the air defense system, and then work on the main object.

October 16 Israeli Air Force worked on some targets in the Damascus area. According to official statements from Tel Aviv, the targets were the positions of the C-200 complex. The Syrian side is limited to on-duty statements. A few weeks later it became known that on that day the Israelis had worked on two goals: the positions of C-200, as well as another object. The latter is allegedly associated with the operations of Hezbollah and Iran in Syria. What exactly the damage was inflicted on both targets remained unknown.

Now, with a high degree of probability, it can be assumed that the October strike was a rehearsal. The Israeli military trained on how to bypass air defense in the Damascus area.

The current airstrike is very significant for the Israeli-Syrian confrontation. Let's try to figure out what was happening in the sky of Damascus. Immediately it should be noted that there were two blows. The first was inflicted by the Israeli Air Force - F-16I Sufa fighters fired several cruise missiles from Lebanese airspace. Most likely, as in October, it was a “disarming strike”, which was delivered to ensure the main mission. His goal became some air defense positions in the suburbs of Damascus. How effectively the Israeli Air Force worked was not officially announced. But judging by further events, the Israelis have achieved a certain success. 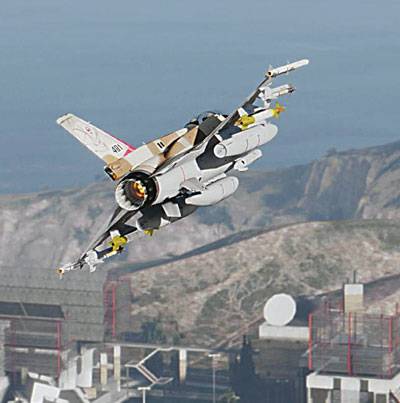 After some time, followed the main blow. The Syrian side reported five missiles, two of which were shot down by air defenses, and three that broke through caused an unnamed target with certain damage. A few hours later, Damascus clarified that the strike was made by ground-to-ground missiles.

Their use is quite unexpected, until recently, Israel has managed air-launched missiles. Spike-NLOS long-range ATGMs were occasionally used, as well as adjustable bombs, including those with satellite guidance. At the very beginning of the civil war in Syria, the Israeli Navy used SLCM. They were released by submarines on the positions and storages of anti-ship complexes "Bastion". But the system "earth-land" are involved for the first time.

What kind of rockets did the Israeli military use? In their arsenal of several long-range systems of this class. In particular, the CD Delilah. This product is capable of hitting targets at a distance of 250 kilometers. Basically, Delilah is used by the Israeli Air Force in the air-to-ground version. But there is also a land version in the arsenal: transportation and launch are carried out from a special mobile installation. The missile is equipped with a guidance system with GPS signal correction. The ground range of Delilah is enough to cover targets in the Damascus area.

Another option is a long-range ballistic missile series Jericho. These are the most closed weapons systems in Israel’s arsenal. According to some reports, the Jericho 3 rocket is the backbone of the Tel Aviv nuclear shield; it can hit targets up to four to six thousand kilometers away. Jericho 2 - an earlier and easier version with a range of just over three thousand kilometers. Now Jericho 2 is derived from the arsenal.

There is a light version based on Jericho 3. This is a two-stage rocket with a range of not more than four thousand kilometers. At the same time, it is equipped with combat units with radar (and possibly optical) guidance of increased accuracy. Tests of this version began in the 2008 year.

Another option is a mysterious airballistic missile, which Israel has been developing for several years. It is often confused with the lite version of Jericho. But judging by the short media reports, the novelty is more of an analogue of the Russian Iskander. If the “light” Jericho 3 is still a ballistic missile, then the trajectory of the secret item does not go beyond the conventional boundary between the Earth’s atmosphere and space. Therefore, the range of its flight most likely does not exceed several hundred kilometers.

Judging by the fact that in all messages of the Syrian media, as well as official statements, the words “missile defense” and “ground-to-ground” missiles appear, with high probability we can assume: the current operation has become the debut of Israel’s weapons system.

It is possible that Damascus knew exactly where the strike would be aimed, and “Buki” and “Pantsiri” were sent there. Therefore, the Israelis had to use missiles capable of somehow breaking through the anti-aircraft shield. But judging by the results, even the newest aeroballistic innovations (if, of course, they were used) turned out to be quite feasible targets for Syria’s air defense.

For the first time, Jerusalem actually officially admitted that its targets in Syria were the objects of Iran and Hezbollah. But has he achieved meaningful results? The answer to this question is given not so much by the text of the Israeli Prime Minister’s statement, but by the place of its publication, Facebook. For modern diplomacy, social networks are quite a significant platform used for a specific purpose: to make a statement as resonant as possible. Before that, Israel was least of all trying to advertise the facts of strikes against Syria.

He performed only in cases where the blow did not reach the result or caused problems. So it was in March, when I had to make excuses for a strike that put the lives of the Russian military at risk. In October, Israel hurried to make a statement, because the strike again did not reach the goal. In this case, all messages emanated only from representatives of the press services of the Israeli Ministry of Defense and the Ministry of Foreign Affairs.

Now Netanyahu made a very loud and resonant statement and even on the Facebook page. Therefore, it is likely that the operation not only did not achieve the expected results, but also led to an undesirable resonance. Therefore, the Prime Minister personally entered the case, which clearly indicates the seriousness of the problem.

Noteworthy are the wording of Netanyahu’s video message. He said that Israel will not allow the development of the Iranian nuclear program. These are, of course, ritual phrases in the style of "Carthage must be destroyed." But the second part of the speech is much more important: Israel warns that it will not allow Iran to be consolidated in Syria. The short phrase made it clear that Jerusalem was so worried. Rumors that appeared in the Middle Eastern media as early as mid-summer were confirmed: Iran is building military infrastructure near Damascus. One of the challenges is likely to be support for the Hezbollah movement.

This development puts an end to the five-year strategy of Israel. By air strikes in Syria, Tel Aviv hoped to inflict maximum losses on Hezbollah’s forces and bleed it, while the expected fall of Bashar al-Assad ensured the breaking of ties between Hezbollah and Iran.

The situation has changed and with it the plans of Tel Aviv. Now the task of the Israeli military is to strike at the Iranian infrastructure being built. Therefore, in the near future in the sky in the vicinity of Damascus, we can expect even larger events. But the most interesting thing is not even that. For example, what will Israel do if, in response to its attacks, Tehran agrees with Damascus and deploys its ballistic missiles there?