December 6 2017
9
Recently decked aviation naval fleet Russia receives the MiG-29KR and MiG-29KUBR fighters. These aircraft are capable of carrying various missile and bomb weapons, providing a solution to a wide range of combat missions. According to recent reports by domestic media, the ammunition range of such aircraft has recently replenished with a new guided missile. To defeat a certain range of targets, they will now be able to use modernized air-to-surface missiles of the X-31 type.


Information on the appearance of a new aviation weapon was published on December 5 by the Izvestia edition. The article “Sea fighters equipped with“ supersonic death ”provided information on current work in the field of armament of carrier-based aviation, as well as the latest achievements of the defense industry. As the heading of yesterday’s article points out, the Admiral Kuznetsov cruiser aviation group now has weapon new type. 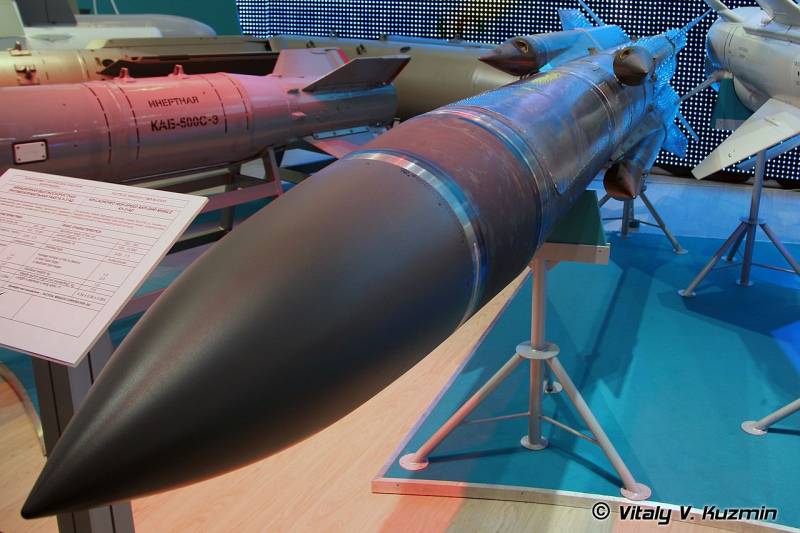 According to Izvestia, the arsenal of weapons of the MiG-29KR and MiG-29KUBR aircraft was replenished with new X-31 missiles. These weapons are available in various modifications designed to destroy surface ships or enemy radar stations. The high speed of the flight and the combat effectiveness of such weapons led to the fact that it received the nickname “supersonic death”. It is also alleged that a massive strike of fighters using a large number of X-31 missiles is capable of inflicting fatal damage even on a conventional enemy aircraft carrier.

Referring to an unnamed source in the headquarters of the Navy, the Izvestia newspaper writes that the defense industry and the Ministry of Defense have completed the necessary work to adapt the X-31 rocket to the new role of deck aircraft weapons. Moreover, the renewed weapon was already included in the aviation armament — this happened in early autumn. By now, allegedly, maritime combatant pilots managed to complete the program of combat training launches and successfully completed the assigned tasks.

According to reports, before adopting the carrier-based fighters X-31 rocket had to go through certain improvements. In the basic version, this weapon is intended for land-based aircraft, which to a certain extent reduces some of its requirements. The specifics of operating at sea led to additional requirements. In particular, the upgraded rocket should have been distinguished by greater structural strength.

The aircraft were subject to modifications. According to Izvestia, in the framework of the X-31 missile adaptation project, MiG-29KR / KUBR fighters received new external suspension assemblies that differ from existing products with greater strength and other capabilities. Also had to make certain changes in the sighting and navigation system of aircraft. Apparently, with the help of new software, the electronics of deck vehicles were “taught” to work with new types of missiles and to interact correctly with their onboard units.

It is argued that a significant part of the modifications of the existing missile weapons was associated with the peculiarities of the operation of missiles by deck-based aircraft. During the operation of the fleet weapons confronted with the problem in the form of characteristic climatic conditions, adversely affecting the state of technology. In addition, the specificity of take-off and landing from the deck places special demands on the mechanical strength of the products.

Due to the need to take off from a relatively short springboard or landing on the corner deck, also not differing in large length, the weapon for a fighter carrier must have sufficient strength. During takeoff, all weapons, as well as external suspension units, are subjected to high loads. Similar problems arise when landing with unused ammunition. Thus, for effective use of deck-mounted MiG-29KR or MiG-29KUBR, promising versions of the X-31 rocket must be distinguished by greater structural strength and increased resistance to lateral overloads.

Any information about other features of the new modifications of the X-31 rocket is missing. It is still unknown what products of the types were taken as the basis for such weapons and, as a result, there is no objective possibility to evaluate their real parameters. However, based on the available information about the X-31 program as a whole, certain assumptions or predictions can be made. For obvious reasons, such versions may differ markedly from the real situation, but in this situation such results are quite understandable and acceptable.

Recall the development of a promising family of air-to-surface air missiles with the designation X-31 started in the mid-seventies. The development was carried out by specialists of the OKB "Zvezda" (now part of the "Tactical Missile Weapons" corporation). Within the framework of a single project, two unified missiles of various purpose were created, which differ in on-board equipment and tasks to be solved. Product X-31А should have been completed with an active radar homing head and attacking surface ships of the enemy. The X-31P missile was proposed to equip a passive radar seeker capable of pointing weapons at radar stations.

Two types of missiles were brought to the test in the early eighties. The necessary checks and fine-tuning of projects took a lot of time and were completed only at the end of the decade. The X-31P anti-radar missile was adopted by the air forces of the Soviet Union in the 1988 year. Anti-ship X-31A entered service a year later. Immediately after the completion of work on the base-version rockets, the development of upgraded products, characterized by enhanced characteristics, was launched.

Currently, there are several X-31 aircraft missiles in the Tactical Missiles Corporation catalog. Anti-ship weapons are represented by products X-XNUMHA and X-31AD; anti-radar - with X-31P, X-31PK and X-31PD missiles. Products of the family differ in some characteristics, but the basis of all projects are the same solutions and units. Sequential modernization was carried out by replacing those or other devices.

The X-31 rockets have a cylindrical body of large elongation, complemented by a lively head fairing and four side air intakes. Products of the family are equipped with a ramjet engine 31DPK. Such a power plant provides maximum flight speed at the level of 1000 m / s. The average speed is lower - no more than 600-700 m / s. Flight range depends on a number of parameters, such as carrier height and speed. The maximum possible range (missile X-31PD) reaches 250 km. The rocket can be reset at speeds of no more than 1250 km / h and altitudes up to 15 km.

The X-31P rocket carried the L-112 passive radar homing head and inertial guidance system. With the help of such equipment, a rocket could find sources of electromagnetic waves and be induced on them. In the course of further development, the rocket received new equipment of one type or another with improved parameters and capabilities.

The X-31A anti-ship missile was equipped with an ARGS-31 active radar homing missile. With the help of such a product, a rocket can find large surface objects and be guided to them with high accuracy. The launch of the rocket to the line of activation of the active head is carried out using an inertial navigation system.

The missiles of the first models of the family were equipped with penetrating warheads of high-explosive action with a mass of 87 kg (X-31P) or 94 kg (X-31А). Subsequently, the mass of the warhead was able to bring to 110 kg for all missiles of the family. This led to a certain increase in power and combat effectiveness in general. 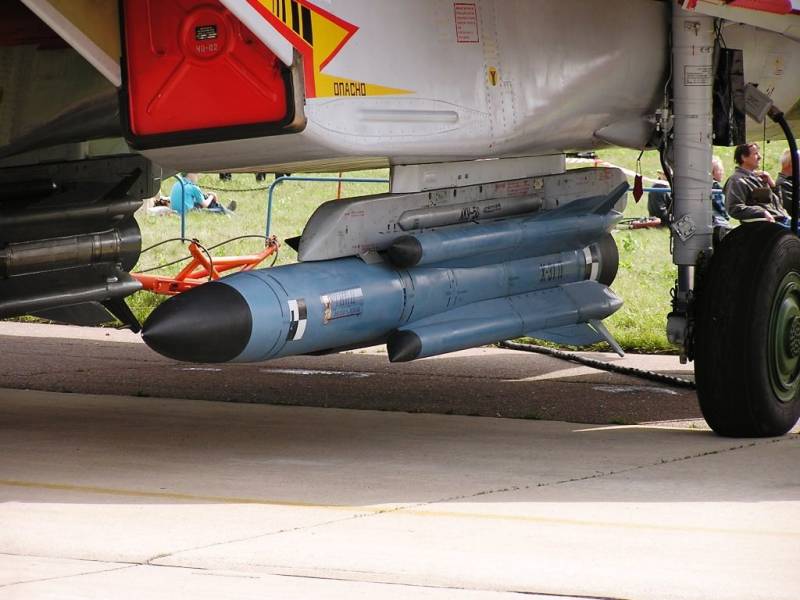 The X-31P and X-31А base missiles differed from the new members of the family by a slightly smaller size and weight. They had a length of 4,7 m with a case diameter of 360 mm. The span of the X-shaped wing was 914 mm. The starting weight of the products did not exceed 600-610 kg. The new X-31 missiles were larger and heavier. Products X-31PD and X-31AD have a length of 5,34 m and weigh 715 kg. Such an increase in mass was due to the weighting of the warhead and an increase in the stock of fuel, which led to a marked increase in combat performance.

It is known that the aircraft of the MiG-29 family is capable of carrying up to two X-31 missiles on the external load, regardless of their specific modification. Thus, a unit of four fighters can be armed with eight missiles, which is enough to deliver a powerful massive strike on certain enemy targets.

According to the latest data, in the framework of the further development of the existing family of guided missile weapons, samples were created for use by deck aircraft. As follows from the published information, within the framework of the new project, one of the existing products was modified taking into account the peculiarities of operation of deck fighters. Most likely, we are talking about strengthening the structure in accordance with the increased requirements and refinement of the on-board electronics for use with aim-navigation equipment of the new carrier.

Even without having complete data on new modifications of the X-31 family of missiles, one can roughly imagine the consequences of the appearance of such weapons. Having received new anti-ship and anti-radar missiles, the MiG-29KR and MiG-29KUB planes will not only expand the range of tasks to be solved, but also increase their potential as a whole. In addition, the new capabilities of the aircraft will obviously affect the shock functions of the ship group led by the aircraft-carrying cruiser.

The X-31AD anti-ship missile is capable of finding and attacking a surface target at distances up to 150-160 km. According to known data, one warhead with a mass of 110 kg can cause serious damage to a ship with a displacement of the order of 4500 t. A salvo launch of several missiles can be used to destroy larger targets. Deck planes with a combat radius of at least several hundred kilometers, carrying missiles of the X-31 family, can significantly extend the range of attack weapons with clear consequences for the security of the ship group.

If the nomenclature of carrier-based aviation ammunition is supplemented with an anti-radar missile, the fleet will receive new opportunities in the fight against coastal targets. It should be borne in mind that the X-31PD missile differs from the anti-ship product with a greater range of fire - up to 250 km. Thus, the ship group led by the aircraft carrier increases its potential in the fight against land objects of the conditional enemy.

According to the latest newsThe new modifications of the X-31 family of missiles, designed specifically for deck MiG-29KR / KUBR aircraft, have already passed all the necessary checks and were also tested by pilots in practice. In early autumn, this weapon was included in the ammunition of new fighters. Apparently, now the future of the new weapon depends only on the enterprises, which are to supply serial missiles.

In recent years, a number of measures have been taken to develop the small carrier-based aviation of the Russian Navy. First of all, purchases of new carrier-based fighters were resumed, which will make it possible to preserve the required aviation group for the only domestic aircraft carrier. As recent reports show, the defense industry is also busy improving existing weapons and adapting them to specific conditions of operation at sea. One of the results of such work has already entered the ammunition of existing aircraft.