December 7 2017
23
The American strategist Zbigniew Brzezinski, who recently departed from us, viewed the euro maid coup in Kiev as a way to tear Ukraine from Russia and turn it into an anti-Russian bridgehead, a ram against Russia, or into a second Afghanistan. However, the Bandera-born Ukraine, born as a result of a coup d'etat, reflected as a boomerang from those who did not recognize the coup d'état of Crimea and Donbass, today becomes a ram of Russia against Europe. 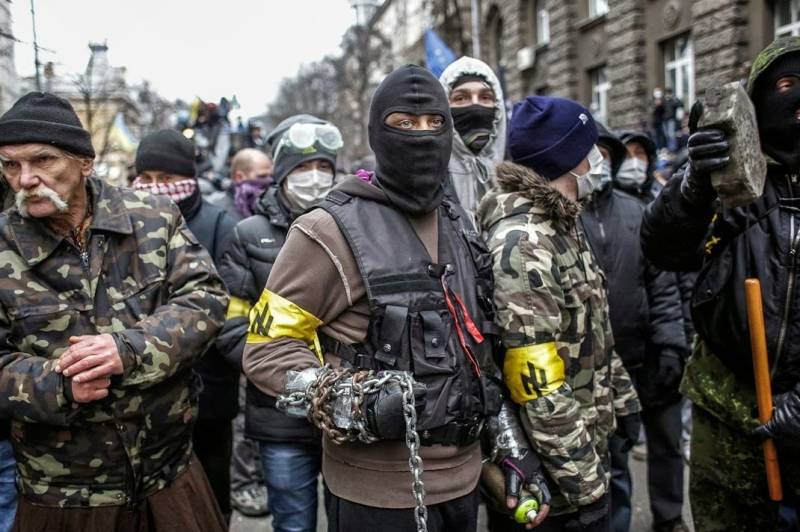 The Ukrainian Brzezinski strategy collapsed when Russia abandoned the Afghan option of bringing troops into Ukraine, choosing another strategy: to isolate itself from Bandera with the Crimea and the Donbas, focusing on the strategic deterrence of the United States in Syria. This led to the boomerang effect: the Bandera ram reflected from the borders of Russia and hit Europe.

Russia perceived the 22.02.2014 coup in Kiev as an attack of the collective West against greater Russia, and this consolidated Russian society around the figure of President Vladimir Putin: the emergence of a hostile springboard on the country's borders cannot be perceived otherwise by the overwhelming majority of the population.

What happened to Europe? Over the past three years after the coup in Kiev, all of Europe has cracked and began to crack. All major European countries plunged into political crisis. England officially left the European Union, Catalonia tried to secede from Spain, the European Union itself informally split into “old” and “young”, North and South. The concept of a Europe of “two speeds” is publicly discussed in the European tops. The emergence of Bandera’s Ukraine and post-Crimean Russia made a significant contribution to this: Europe began to split with respect to them.

Many people find the policy of Russia regarding the obviously hostile Bandera Ukraine strange, and not without reason: Russia saved this regime with finances, through the daughters of Russian banks in Ukraine, and still remains almost the main investor, in 2017, the countries registered an increase in trade turnover, And Russia supplies strategic materials, like diesel fuel.

Moreover, Moscow stoically pays no attention to the constant insults coming from Kiev. Why? Is she afraid to worsen relations, if not with Bandera, then with the West? Afraid of losing money in the West? But the life and security of the country are more precious than any money, just like life in and of itself, and for those in power, and our millionaires and their families.

This is different. Russia is playing a big game with the West, and such countries as Ukraine, Poland, the Baltic border fronts are nothing more than different-sized figures on the world geopolitical board, behind which sit the United States, Europe, Russia, China, India, perhaps everything.

Russia's long-term strategy has as its goal the West, primarily Europe, and not the Bandera Ukraine, which in any case will fall at the feet of the winner in the world confrontation that has begun. The United States is inciting a new cold hybrid war, but then, as before, it seems that they will wash their hands, leaving Europe to clear up their porridge. Europe suspects that Trump just wants to "wash his hands," this is the mission of his presidency, so Chancellor Merkel somehow let it slip that from now on, Europe can only rely on itself.

In this situation, Russia uses the Bandera Ukraine against Europe in the long term, turning a blind eye to the immediate troubles. As a result, for three years the imperturbable “Minsk” policy of Russia and the resilience of Donbass turned the Bandera ram toward Europe. The neo-Nazi nature of Bandera is becoming a factor in European politics, some countries, for example, Hungary are no longer afraid to openly oppose Kiev, Germany and France, the Norman guarantors of the Minsk agreements, began to distance themselves from Kiev.

The failure of the Ukrainian strategy Brzezinski requires the United States to make adjustments to it. The main platform for this was the negotiations of special representatives Volker - Surkov. The Washington Post writes in this connection that Russia is preparing a "Syrian trap" for the United States in Ukraine. Moscow went to the "theater diplomacy" with the United States (Volker-Surkov negotiations) in order to implement its scenario in Ukraine. Russia is allegedly planning an aggravation in Ukraine, as in Syria (?), In order to achieve a more advantageous position in future negotiations, somewhat yielding to something.

In fact, the new outbreak of war in the Donbas is openly preparing the Bandera regime, the head of the National Security and Defense Council Turchinov in the Rada publicly demands a decree on the introduction of the Armed Forces of Ukraine to the Donbass. The creeping onset of the Armed Forces of Ukraine in the “gray zone” is an indisputable fact. In Kiev, they again raised a slogan on the shield: the war will write off everything, all the problems and absurdities of the Bandera power — their American accomplices know this, and they are trying in advance to lay the blame on Russia, from a sick head to a healthy one.

However, the "Syrian trap" seems to be really awaiting the United States in Ukraine - this could be an initiative on peacekeepers, discussed at the Volker-Surkov negotiations. If the Bandera regime leaves the Minsk agreements, adopting a law on “reintegrating Donbass” and “reintegrating” it, Moscow can declare Bandera out of legitimacy and introduce its peacekeepers to Ukraine, like VKS to Syria.

Ctrl Enter
Noticed a mistake Highlight text and press. Ctrl + Enter
We are
On the death of BrzezinskiProject "ZZ". Cold war figure
23 comments
Information
Dear reader, to leave comments on the publication, you must to register.