December 6 2017
18
In the current and future state armament programs, some attention is paid to the upgrading of the material part of the airborne troops. Given the special role of this type of troops, the programs provide for the supply of a significant amount of weapons and equipment of both existing and prospective types. To date, such supplies have already led to a marked increase in the share of new samples. Current trends will continue, and Airborne will soon receive new weapon and technique.


In recent years, the military and defense industries, overcoming the differences, have begun to update the fleet of combat vehicles of the airborne troops. New contracts for the supply of certain weapons were also signed. The implementation of such agreements has already led to the most serious results. The share of new designs is constantly growing, which positively affects the potential of the troops. 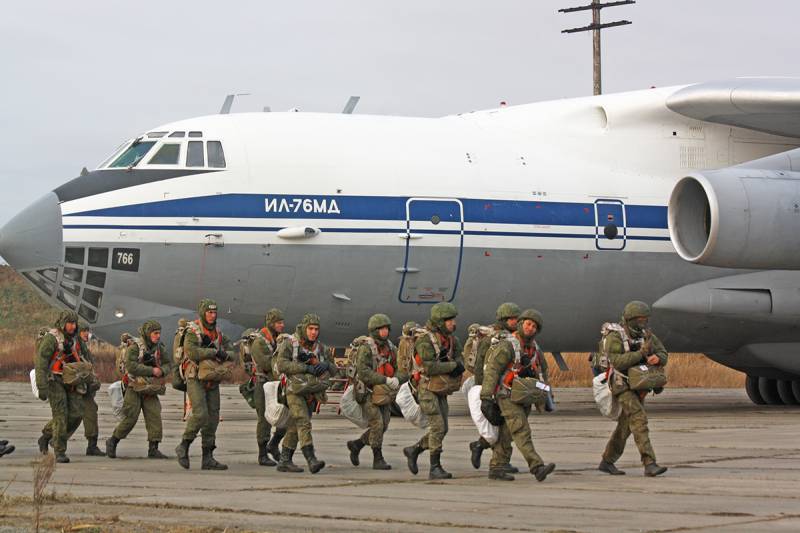 December 1 edition of the Ministry of Defense "Red Star" has published several interesting statements of the commander in chief of the Airborne Forces, Colonel-General Andrei Serdyukov. The commander told about the latest achievements in the training of personnel, the formation of new parts, as well as the supply of modern weapons and equipment. So, to date, a significant update of the material part has been carried out, and in the foreseeable future it will continue.

According to A. Serdyukov, at the moment the share of new weapons, military and special equipment in the Airborne Forces exceeds 60%. A significant contribution to the renewal of the fleet of combat vehicles made the process of building new technology. For two years, the army received four battalion sets (120 units) of BMD-4M airborne combat vehicles and BTR-MDM Rakushka armored personnel carriers. Two sets of four were delivered this year and entered into service with the Ulyanovsk separate assault landing brigade.

As part of the procurement of new systems and weapons, the airborne troops are also modernizing their air defense. In the air defense units delivered about five hundred complexes for various purposes. These are reconnaissance and control facilities, communications equipment and the latest Verba portable air defense systems.

The most important role in the current re-equipment is the modernization of existing combat vehicles and weapons. Over the 2017 year, the industry has repaired and updated over a hundred armored combat vehicles. The self-propelled artillery installations 2C9-1М, the Strela-10MN anti-aircraft missile systems and other military equipment for various purposes were upgraded.

In accordance with existing contracts, the defense industry will continue to build weapons and equipment for the airborne troops. A part of the new cars being built at the moment will go to the troops already in the next 2018 year. Other products will be delivered by the end of the decade. Thus, the total number of airborne assault vehicles and armored personnel carriers of the new models is planned to be increased to three hundred by the 2020. At the same time the next year the delivery of several dozen of similar machines is planned.

In 2018, the artillery units of the Airborne Forces will have to receive about three dozen Sprut-SD self-propelled guns. The supply of some new self-propelled anti-aircraft systems should also begin. The industry will continue to upgrade the already built machines. In particular, the next year it is planned to update three dozens of repair and recovery vehicles BREM-D.

Reportedly, the delivery of the latest technology will allow the process to continue with the rejection of outdated samples. The BMD-1 airborne combat vehicles, the BTR-D armored personnel carriers and the Nona self-propelled guns have already become morally and physically obsolete, but now - if there is a replacement - their cancellation will not have negative consequences in the context of the troops' combat capability.

A characteristic feature of the Airborne Forces is the possibility of parachute landing from military transport aircraft. The next 2018 year is scheduled to start supplying the latest multi-domed parachute systems “Bakhcha-UDS”. According to known data, such systems are fully compatible with all models of equipment that have the ability to parachute landing. With their help, it will be possible to lower combat vehicles BTR-MDM and BMD-4М, armored vehicles of the Typhoon and Tiger families, etc., to the ground. 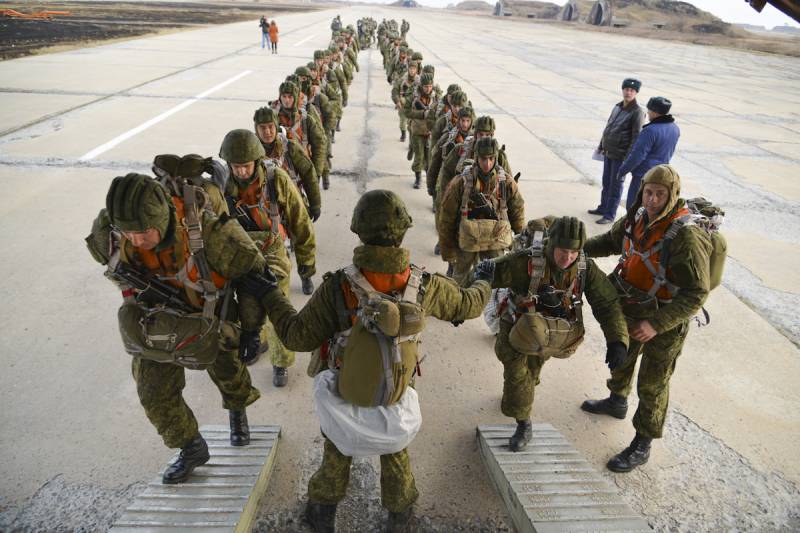 The development program of the airborne troops takes into account the latest domestic achievements in the field of radio-electronic technologies. Next year, as part of all amphibious units, separate groups will appear, which will have to exploit the “fruits of progress”. These units will be armed with unmanned aerial vehicles of various types, with which they will be able to carry out reconnaissance and solve various other tasks.

In early November, the press service of the military department revealed some details of the procurement of UAVs for the airborne troops. By the end of this year they planned to transfer about two dozen complexes of several models. Multi-functional devices of the Orlan, Tachyon and Eleron types, purchased for the Airborne Forces, carry optical-electronic equipment and are intended for reconnaissance. The data collected with the help of such equipment can be used by different units, both arrows and gunners.

Also, new groups will receive modern electronic warfare equipment. As the commander-in-chief of the Airborne Forces told, the first EW complexes have already been handed over to the troops and are now in trial operation. According to known data, paratroopers will have to operate electronic warfare systems of various types and for various purposes. With their help, they will be able to identify the location of various objects of the enemy, and such information should increase the situational awareness of the units.

According to RIA "News“, One of the EW complexes of the new type will be built according to a modular principle and should include means of direction finding of radio signal sources. In addition, this system may be able to suppress the communication channels of the enemy. The basis of its task in this case will be the issuance of data on the location of enemy objects. In the 2021 year, according to the commander of the troops, deliveries of the new Lorendit-AD electronic warfare complex will begin. This system will be assembled on the basis of a serial armored car with high levels of terrain. Its main task will be to identify and suppress radio channels.

On 2018, the delivery of the first production machine of a different type, also carrying special radio-electronic equipment, is scheduled. We are talking about the command and staff car with the equipment of the automated control system for the troops "Cassiopeia-D". This model is built on the basis of the BTR-MDM serial armored personnel carrier and is equipped with a large number of new equipment. Crews of such machines will be able to coordinate the actions of the troops in large areas, ensuring the timely transmission of information through all available channels.

In addition to adopting new weapons and equipment, the command of the airborne troops implements the renewal of combat equipment of personnel. To date, a significant part of the Airborne Troops have managed to get complete sets of combat equipment "Warrior", adapted to the needs of this kind of troops. Next year 2018 is supposed to complete the transition to such equipment and completely abandon the outdated systems of similar purpose. The development of a specialized version of the "Warrior" significantly increases the combat capability of both individual soldiers and units as a whole.

In the recent past, the formation of new compounds. Similar processes will take place in the future. The latest at the moment the result of such work is the formation of a new separate airborne assault battalion of the Novorossiysk airborne assault division stationed in Feodosia. In addition, a separate repair and restoration battalion began service in the Moscow region. The organizational arrangements for the creation of the two parts ended on December 1.

Along with the creation of new compounds, it is planned to reform existing ones. So, at present in several formations of the airborne troops there are tank companies equipped with T-72B3 combat vehicles. Earlier this month, Colonel General A. Serdyukov announced that next year six existing companies will be reorganized. These units will be strengthened and turned into battalions. After such a change in structure, the former tank companies will be part of the 2018th and 7th air assault divisions, as well as one of the air assault brigades. 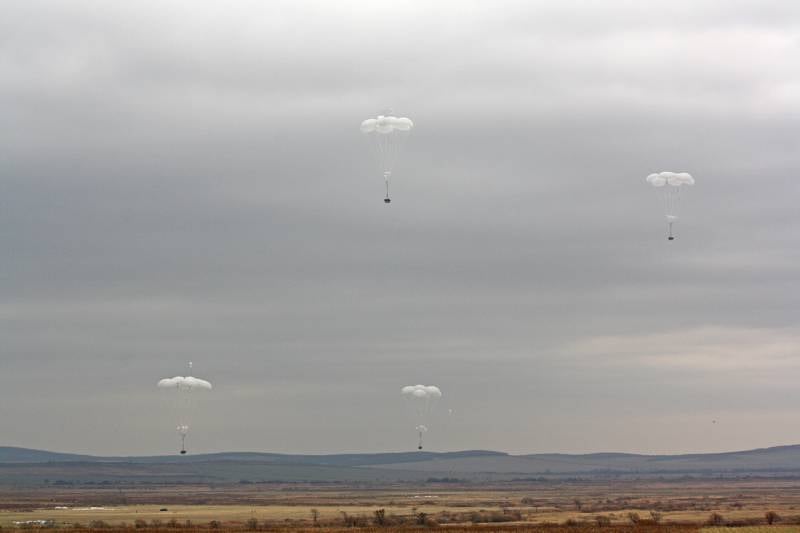 Plans have already been drawn up affecting the processes of combat training of personnel. The main objective of the Airborne Forces in this context is to improve the quality of military training at various levels. Different battalions, regiments, brigades and divisions will be involved in the exercises.

Next year it is planned to hold six command and staff exercises, including under the leadership of the Commander of the Airborne Forces. There will also be 40 training activities at the tactical level, during which the soldiers will parachute on the ground. The units of the airborne troops will take part in seven international exercises, some of which will be held abroad.

According to the command of the airborne troops, to date, the process of their modernization has already led to the most noticeable consequences. To date, troops on 70% are staffed by contract servicemen. Military and special equipment of the Airborne Forces are provided on 100%. At the same time, the share of new types of weapons, combat and special vehicles has already exceeded 60%. Thus, the 2017 year airborne troops complete with a number of positive results.

Next year, the “winged infantry” will continue to master the new materiel and develop the existing structure. This will again have to lead to a certain increase in the basic indicators and an increase in the combat effectiveness of the troops as a whole. The second way to improve combat capability is to properly conduct a variety of training activities. Such activities are carried out in accordance with the plan of activity of the troops for 2018-2016 years. As the commander in chief of the Airborne Forces notes, the intensity of training troops is constantly growing.

As one of the key elements of the Russian armed forces, the airborne troops continue their development. Parts receive new weapons and equipment of the latest models, as well as send existing samples for modernization. At the same time, combat training plans are being implemented, which makes it possible to fully utilize all the capabilities of the new material part. The current year of the Airborne Forces is being completed with good results, and next year the main work will be continued. There is reason to look into the future with cautious optimism and believe that the troops will meet expectations and cope with the implementation of existing plans.

Ctrl Enter
Noticed oshЫbku Highlight text and press. Ctrl + Enter
We are
Upgrading fleet of tanks: modernized T-90, “Almaty” and BMPTThe Ministry of Defense is starting to eliminate the Airborne Forces
18 comments
Information
Dear reader, to leave comments on the publication, you must to register.