Some details of the program of the promising Russian helicopter

December 5 2017
59
Russian Helicopters JSC is working on a new generation of combat helicopter ordered by the Russian Ministry of Defense in August 2017. To date, there is a package of interconnected contracts for the development of the concept of the helicopter and the technical requirements for it. This stage (R & D) should be completed at the end of 2018, reports bmpd citing Air & Cosmos magazine. 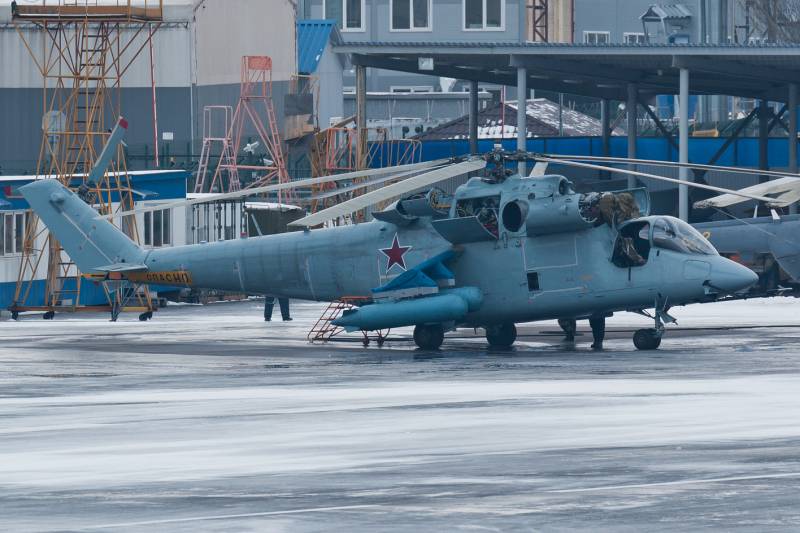 Flying laboratory of a high-speed helicopter, converted from a Mi-24K helicopter to the Moscow Mil-Helicopter Plant JSC.

During the next phase, the concept of the helicopter, the creation of the project and testing will be worked out. According to the schedule of "Helicopters of Russia", the mass production of the machine can begin approximately in 2023 year.

“The name of the program is the abbreviation SBV (high-speed combat helicopter). In Russia, it is called the fifth generation helicopter, although it is difficult to count more than two generations of helicopters in previous versions of Russian military helicopters, ”writes the magazine.

It is reported that “each of KB - Mil and Kamov is working on his project - Kamov uses a coaxial scheme, which is a distinctive feature of the brand, and Mil Milar Bank prefers the classical scheme; common between the two projects are only a large span of horizontal tail, which is designed to relieve the rotor in high-speed mode. "

The only known characteristic of a helicopter is its speed, which should exceed 400 km / h.

AO Klimov, responsible for the propulsion system, is working on a new turboshaft engine VK-2500М. “According to the company, the VK-2500M engine is completely new, and not a modification of the VK-2500 serially produced now. The take-off power of the new engine is 2600 hp, in emergency mode - 2950 hp That is, the new engine is somewhat more powerful than the VK-2500 (2400 hp in takeoff mode and 2700 hp in extreme mode). The new modification M will have less weight on 20% and less parts on 16%. Specific fuel consumption should also be reduced by 7%. Overhaul life increased. The modular design also allows repairs in the field. VK-2500М engine must be certified in 2023 year, that is, simultaneously with the SBV helicopter. This engine will also be used on upgraded versions of the Mi-28Н and Ka-52 helicopters, ”the material says.

According to the magazine, "the SBV will be equipped with new avionics and new weapons systems, since the existing Russian systems are significantly inferior to Western counterparts."

In May 2017, the technical director of the equipment of helicopters in Russian Helicopters Nikolay Fedorov, assessing the avionics, aiming systems and armament of Russian helicopters, concluded that "Russian-made electronic equipment produced for helicopters is uncompetitive."

“In the opinion of Russians, radar-mounted radar helicopters, helmet-mounted target designation systems and guided missiles are characterized by poor performance. In these areas, their lag is critical. The disadvantage of the radar is the lack of indication of the target. In the case of anti-tank missiles, their range of use is very small, and they do not have the ability to "let go and forget." The Russian helmet-based target designation system simply does not exist, as no Russian development has ever reached mass production. In the same vein, Fedorov believes that the Russian radio communications system for helicopter gunships also lagged behind the Western models by ten years. The level of system integration and crew support in decision making is rated as very low. There are no warning systems about a collision with the ground, ”the author writes.

In other areas, such as on-board computer, flight control system and navigation system, on-board defense complex, sight, displayed on the indicator on the windshield, optical-electronic sensors, and unguided rockets, the lag is not so great and can be easily reduced. Only three systems were rated by Nikolay Fedorov as “magnificent”: a flight control system, navigation system software and a gun, the magazine notes.

All of these deficiencies should be eliminated in the new car.

The scope of the tasks suggests that mass production in five years seems unlikely, despite the statements made. But in the end, the helicopter will be equipped with transition systems, the publication concludes.

Ctrl Enter
Noticed oshЫbku Highlight text and press. Ctrl + Enter
We are
Russian perspective helicopter RACHEL is getting closerMedia: Putin vainly admired the T-50 fighter - he was shown the plane with the old stuffing
59 comments
Information
Dear reader, to leave comments on the publication, you must to register.