December 7 2017
15
Russians and Swedes have been little brothers forever. At least in the second millennium, well, the 1054 ecclesiastical schism of the year only strengthened the existing contradictions. In the Middle Ages, our neighbors in the Baltic Sea were full of energy, for they accepted Christianity, but somewhere there, on the outskirts, the pagan god Odin still roamed with a hat shifted over his eyes and for something else Ancestors so sought to find themselves in his possession, but now took the holy communion. Of course, then there was no Russia in our current understanding, and the entire blow of the Swedish fist, chained in a knight's glove, was taken up by the Novgorod Republic. The most famous for the general public case of the Swedish military tourism in those years was, of course, the Battle of Neva, but it did not put an end to the attempts of kings to pacify the recalcitrant Russians from Mr. Novgorod the Great. 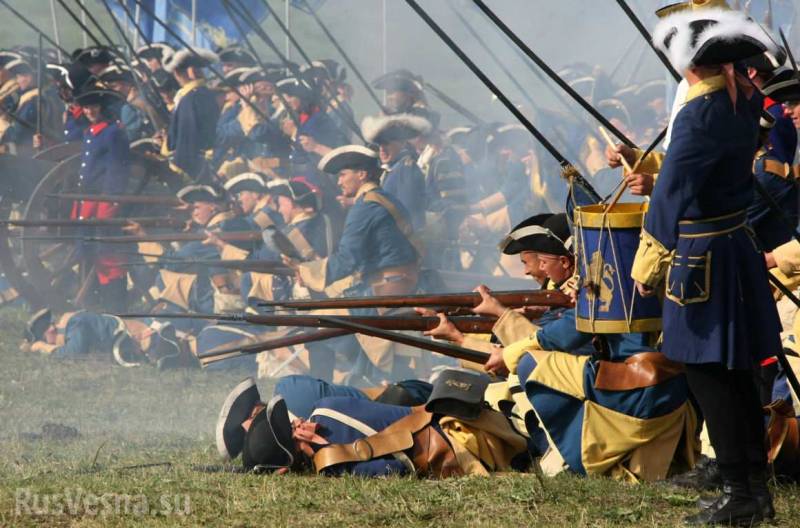 And everything was so decorum and noble somewhere until the end of the XVI - beginning of the XVII centuries, until the Time of Troubles came in the Moscow kingdom. The course of circumstances that followed subsequently was preceded by the fact that the Swedes apparently realized that someday Russians would go to the Baltic Sea (well, Ivan Vasilievich Grozny frightened them, frightened them) ... No, no, I'm not saying that someone then in Stockholm he directly foresaw the construction of the Russian fleet and so on, but our northern neighbors, about 400 years old at that time, with heartache and sincere tormented heart perceived the Russian border along the Korel-Oreshek line, so when this “gift of fate” happened, they naturally did not fail to use it, and as a result, the Russian kingdom was driven back from the Baltic, remaining content only with the southern and eastern parts of Lake Ladoga.

Nearly 90 years, all of our neighbors in this matter was good (well, as "good", the Russians tried to regain what was lost, even carried out a successful campaign in the middle of the 17th century, taking Nyenskans and "walking" in the city of Nien (there was such a city where now the Krasnogvardeisky district of St. Petersburg is located), but alas, it ended with nothing special), while the impudent Russians, led by Peter the Great's energetic hand, did not say: “Enough!” and, having won back their lands, began to build on them navy.

And here, dear comrades, the most interesting begins. What is interesting and remarkable? Yes, the fact that before all the Russian-Swedish wars were fought solely on the Russian territories or the territories of the nearby peoples. However, since 1719, before the Swedes, the real prospect of a Russian invasion by landing troops and further advancing the troops loomed ... No, the troops landed by us, offended, and it all affected the Stockholm Cabinet so that the Northern War was over. the conditions on which Russia insisted. The years on 20 are a former Viking calmed down.

However, sensing the weakness of the Russian authorities, in 1741, the Swedes again decided to try their luck, but alas, they not only failed to win, but also had to give back part of the territory to 1743.

For half a century, everything was quiet, as in the 1788 year, the Swedish king Gustav III set quite ambitious goals for his kingdom, while engaging the large forces of the Swedish navy. For a while, fortune smiled at him quite widely, and he already seemed to see his triumphal entrance to St. Petersburg. Nevertheless, the naval victories of the Swedish fleet were extremely difficult (I would like to note that the “naval victories of the Swedes” are controversial, and this war raises many questions, but you should think who achieved their goals, as it becomes clear that the Russians the naval sailors carried out all the tasks assigned to them, even at the cost of serious losses: the Vyborg could not be taken by the Swedes, the blockade of Kronstadt and the occupation of St. Petersburg were not discussed). We separated from Sweden after that war, each with its own interests and in the same territories.

Fully illusions about Russia Stockholm lost 1808-1809 to the war, when some Swiek alarmists already saw their Homeland as the next Russian province. Like this? It's simple: the Russian army, on the ice of the Gulf of Bothnia, set foot on the land of the kingdom, being very close to its capital. Moreover, the Swedes themselves found out about it once they saw bonfires, and Russian soldiers warming themselves around them. It was a strong nezhdanchik! And he acted in such a way that Finland for almost 110 years became part of the Russian Empire.

Yes, on the one hand, Sweden calmed down completely and, apparently, realizing what the next war for it could turn into, not only with Russia, but as a whole, did not directly climb into European conflicts. On the other hand, the memory of the “Russian bonfires” under Stockholm completely entered the average mind of the subject of the Swedish kingdom and for more than 200 years forced him to think of Russia as the monstrous force that could wipe him off the face of the earth. The Soviet period was no exception. As I wrote above, Sweden did not directly participate in any conflicts, but, for example, in the Soviet-Finnish war supplied the same Finns and weaponand volunteers (then the same behavior will be towards Germany, when the Germans were given the right to use the Swedish infrastructure in the north of the country).

The victory of the Soviet Union in the Great Patriotic War temporarily calmed the “hot heads” of the kingdom, but did not calm their suspicions. The Soviet Baltic Fleet also inspired sufficiently strong respect, although it was weaker, for example, in the German Kriegsmarine regarding large surface ships of the battleship and cruiser classes, but after the end of the Second World War in general it was numerically superior to the Swedish fleet, and the gradual replacement of the ship and the emergence and development of rocket weapons was a factor that did not work in favor of Sweden.

For the time being, everything was quiet, as in 1981, the Soviet diesel submarine of the 613 project was not stranded, and on the contrary, to be stunned by some secret Swedish naval base. Everything. To the former Vikings, to put it in modern language, as “the roof blew off”. Here, of course, played, including, the propaganda component, and this incident served as a good help in the information war against the Soviet Union. And since then, the Swedes, on special days of "lunar activity", have seen Russians everywhere.

Even, it would seem, now that our already Russian Baltic Fleet has forces and capabilities that are completely incomparable and incomparable with the Swedish Navy, the former Vikings see a Russian landing or a surprise strike by a Russian military aviation. And God bless you, when all this goes on the level of ordinary people, but when their military experts talk about such things, I want to think: what is this, unsuitability or deliberate pushing of your country into NATO? It may not seem patriotic to you my opinion about our today's fleet in the Baltic Sea and about the capabilities of our military units (marines, land forces) that we can simply take and load into landing ships and transports, and send “to fight Sweden” (I By the way, I’m even silent about the massive use of the Airborne Forces, will we have so many military transport aircraft?) without exposing other sites, but still face the truth: even Peter the Great with his resources could not do it, and through 100 years after him Al to Axander I (no, of course, the Russian Empire did not set such tasks), and you cannot do such a thing with missiles alone. I am more than confident that in this case our military will fulfill all the tasks assigned to them, once again showing unparalleled courage and fidelity to duty, but for a long time we will not be able to continue. Especially considering that other countries will immediately stand up for Sweden, and this is already a conflict with NATO.

However, I am more than confident that the kingdom is also well aware of this, but since it is necessary to work out the “order”, disdaining pride, they mold their philistine, and at the same time to the rest of the world, such a “hunchbacked”.

Summing up, I would like to say that, of course, the “Russian threat” for the Swedes did not arise out of nowhere, and some things penetrate into the national consciousness of an entire people, creating at it sometimes not decades, but horrifying images for centuries. The reality, especially in the last century, suggests that it is rather a ghost. Fear has big eyes!

Ctrl Enter
Noticed oshЫbku Highlight text and press. Ctrl + Enter
We are
What you didn't want to know about EnglandList of destroyed the largest and most high-tech enterprises
Military Reviewin Yandex News
Military Reviewin Google News
15 comments
Information
Dear reader, to leave comments on the publication, you must to register.