Is Kiev Hague afraid of

December 6 2017
13
Why Ukraine stubbornly does not want to "be friends" with the Hague Tribunal? 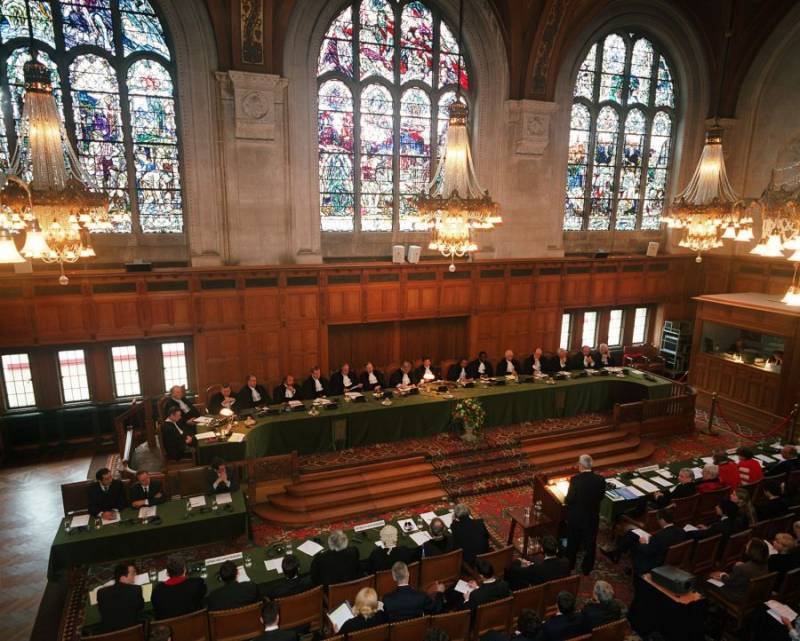 November 29 World news shook up messages from the Dutch The Hague, where the Croatian General Slobodan Prajak publicly imposed his hands on himself. The namesake of Slobodan Milosevic who died in The Hague was one of six Bosnian-Croatian politicians who were convicted several years ago by the International Tribunal for the Former Yugoslavia. Former leaders of the Croatian army and the Croatian state who, relying on Western assistance, suppressed autonomous Serbian formations on the body of their country in the nineties, were found guilty of war crimes during the civil war in the former Socialist Federal Republic of Yugoslavia. Prilyak himself was sentenced to twenty years in prison, and filed an appeal, which 29 officially rejected on November. After which he took poison, preferring a quick death run to end his days in prison.

This историяwhich, as it seems, is very remotely related to Ukraine, in fact, well demonstrates why Ukraine, which strongly emphasizes its desire to become part of international and European structures, still delays recognition of the jurisdiction of the International Criminal Court in The Hague. Although the Ukrainian deputies, like Svetlana Zalischuk, love to visit the UN structures located in this ancient city, occasionally taking pictures with the masterpiece by Jan Vermeer - the painting “Girl in a Pearl Earring”. After the recognition of the international tribunal, there would have been much more reasons to go there.

The reasons for this annoying delay are openly voiced by representatives of the Ukrainian authorities. Thus, the deputy head of the presidential administration of Ukraine, Aleksey Filatov, stated that the three-year delay in the entry into force of the norm of the draft law No. XXUMX “On Amendments to the Constitution of Ukraine on the recognition of the jurisdiction of the International Criminal Court” was caused by the fighting in Donbass. “Accepting the jurisdiction of the ICC will have potential positive consequences. At the same time, it contains certain risks for Ukraine, in particular, from the point of view of the Ukrainian military, who are compelled to participate in a military conflict, ”Filatov said bluntly.

Obviously, he means that, despite the well-known slogan “The whole world is with us!”, The Hague Tribunal may well take into consideration numerous claims for war crimes and human rights violations that were committed since the beginning of the war on the territory of Donbass, there to this day. And if the Ukrainian courts are guaranteed to let this case go flat, the international authorities cannot curb the usual way by letting in them the nationalist ATO veterans.

The fear of this is so strong that in May 2015, the Ukrainian parliament voted a special decision that official Kiev officially refuses to fulfill a number of international obligations to protect human rights, notifying the UN leadership and Secretary General of the Council of Europe about this decision. And no one hid the fact that this not very plausible ruling is intended to reduce the risks of possible responsibility for war crimes accusations, which can be considered in the framework of the work of international supranational judicial structures.

And no further, as in October of this year, one of the lobbyists of the Ukrainian ultra-right, Deputy Igor Lutsenko, voiced the same fears under the dome of the Verkhovna Rada. “If the power in Ukraine is radically changed, there will be no obstacles to punishing the Ukrainian military personnel who committed war crimes during the ATO. For this, the appeal of the Ukrainian Cabinet of Ministers to the International Criminal Court is enough. Who can now guarantee that there will never be such a request? ”, Said the Ukrainian politician. He probably remembered at this moment his brief experience of being in the ranks of the Azov battalion, which has long had outside Ukraine a specific image of a Nazi cadre in a pan-European scale.

Almost simultaneously with Lutsenko, the same idea was voiced by the former Deputy Prime Minister and the representative of Ukraine at the negotiations in Minsk, Roman Bessmertny. “The president and the deputies should understand that as soon as the president and the political situation in the country change, atoshniki will all sit down under articles about illegal seizure weapons, group robbery, gangsterism, ”he said, while also nodding towards the international structures, to which citizens who were injured in the course of the ATO, who desperate to find law and justice in their homeland, are complaining most actively.

The fate of Slobodan Pralyak materializes these fears of radical Ukrainian politicians. Indeed, in the not so distant from the nineties, when Croatia was a political favorite of the United States and United Europe that was emerging then, no one could even think that a whole number of representatives of the “pro-European” and “pro-American” elites would end up in an implorious year in prison. After all, their actions were openly supported in Berlin, Paris and Washington, who supplied weapons to the pralyaks and trained their military personnel. Croatian politicians were convinced that The Hague is only for the Serbs - who, to be fair, are also responsible for Srebrenica and other crimes of this war unleashed with the active participation and support of external "democratic" forces.

At first everything went exactly this way - but at the end of the 2000s, the International Tribunal for the Former Yugoslavia decided to at least partially get rid of the reputation of the court for Serbian politicians. At least in order to maintain its credibility for future trials. This happened after 2011, when the last high-ranking Serbian leader, General Ratko Mladić, was taken to The Hague. A year later, at the request of the same West, Prilyak and his colleagues appeared on the same dock. The reputation of the “national heroes” and the support of the local counterpart of the nationalist dobrobatov did not help - the Croatian authorities preferred to resignedly execute the order of the international tribunal, handing over its fellow citizens to its hands.

If this happened in Croatia, why this can not happen in Ukraine - it does not matter now, or, again, after ten or fifteen years? Of course, the Ukrainian “hawks” cannot but feel this threat - after all, they love to talk about the “Croatian scenario” so much, meaning the tough military sweep of the Donetsk-Lugansk analogue of the unrecognized Serbian Krajina. But, dreaming of this, it would be worth remembering that later this Croatian scenario could most unpleasantly be repeated for many of the heroes of the nation in the international court of The Hague.

Ctrl Enter
Noticed oshЫbku Highlight text and press. Ctrl + Enter
We are
Serbian Patriot General R. MladićThey are judged so as not to be tried. To the arrest of General Mladic
Military Reviewin Yandex News
Military Reviewin Google News
13 comments
Information
Dear reader, to leave comments on the publication, you must to register.