December 6 2017
9
On a dark winter night on 4 February 1968, a small string of lights moved along the already sleeping Novorossiysk. Lights fluttered in the February wind and hurried away from the city towards Stanichka, then still quite the outskirts. These mysterious lights were 28 people: front-line nurse Elena Ostapenko (a participant in the small-landings landing, according to open data TsAMO was awarded the medal “For Courage” and “For the Defense of the Caucasus” after the battles in Novorossiysk) Patriotic Club "Schooner of the Same Age" Victor Buravkin, Vladimir Kozlovsky, Natalya Bondareva, Tatyana Junko and many others.


The lights in their hands are homemade torches of sticks, tow, cans and wire for fastening. Finally, a small detachment approached the inhospitable winter sea. Their path was lit only by dim torch lights, since electrification had not yet reached the suburbs. Suddenly, a border searchlight flashed and lit up the surf. One of the young men separated from the procession and laid on the ice waves a lonely cap. There was a minute of silence, only the night surf spoke. So the first “Peakless Cap-68” was held, then it was not yet All-Russian, and even not regional, or even “action”. It was just "Operation" Peakless ". Tribute to the memory of the legendary paratrooper Major Caesar Kunikov on the bridgehead, which will soon become known to the whole world as the “Little Earth”. 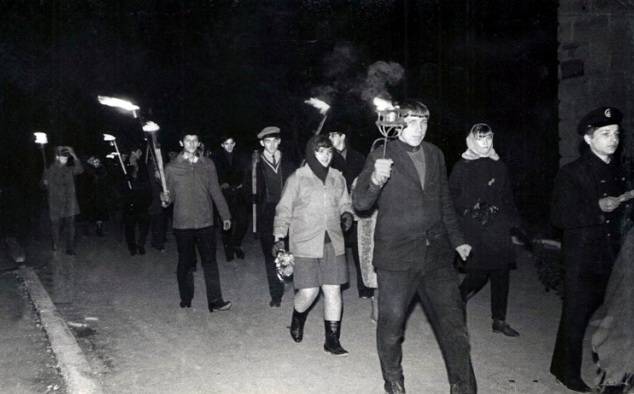 The first "Capless" was in silence along the night streets, and the outskirts were not electrified at all.

In that distant 1968, there was still no large-scale memorial complex “Little Earth”, but there was an “Eternal Flame”, from which small torches were lit. There was stony soil, torn open, and there was the Black Sea.

Peak-Cap is a great example of a bottom-up initiative, sometimes only these initiatives seem successful, close and important. It is then that some individuals are trying to increase them with all the bureaucratic love, the taste of official life that these citizens bring with them, etc. etc. But while they remember how it started, the initiative lives, stubbornly and imperturbably “digesting” the superficial.

The "Capless Cap" began, of course, not on a frosty night with 3 on 4 February 1968 of the year, surely, that night was the same gloomy and uncomfortable night in 1943. It all started with the fact that the "schooner" (as in Novorossiysk, it is accepted to call the guys from the club "Schooner of the same age") in November 1967, deeply thought about how they can pay tribute to the memory of the 25 anniversary Kunikovsky landing. The guys wanted something real, something close to those heroic days, something innovative and without undue odiousness. So the decision came - to go on the night of February 4, precisely at the day and hour of disembarkation, with torches lit by eternal fire to the landing site in the Stanichka area and lay on the seafly a visor.

All this then was, in fact, an innovation. At that time, the “shkhunatiki”, the initiators of the “operation”, belonged to the local newspaper “Novorossiysk worker”, the journalist of which was Konstantin Podyma. Despite the erroneous opinion that the Novorossiysk City Committee of the Komsomol immediately took up this idea, and even was its initiator, the guys did not immediately support it. Moreover, members of the city committee did not take part in the assignment of the first beskozyrki. Full support from the Komsomol "beskozyrka" received only after 3 year! 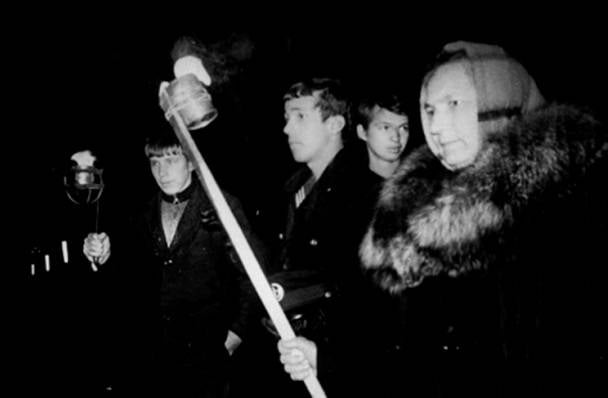 On the right - a veteran of the Little Land Elena Ostapenko

In addition, at first Rises and his guys came across cold politeness, to put it mildly. Already in December, 1968, when the club “Schooner of the same age” fully developed the plan “Operation“ Peakless Cap ”, in the Komsomol city committee wondered why at night, who would see where the scale was ... Partly due to the fact that the Komsomol had its own plans for 25 anniversary of Kunikov’s disembarkation, only the city committee planned to hold the march on the evening of February 4, and not at night from 3 to 4. However, they did not openly speak out against this independent initiative. 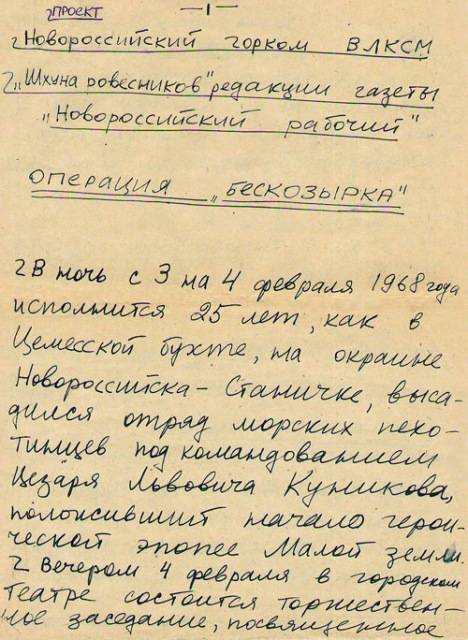 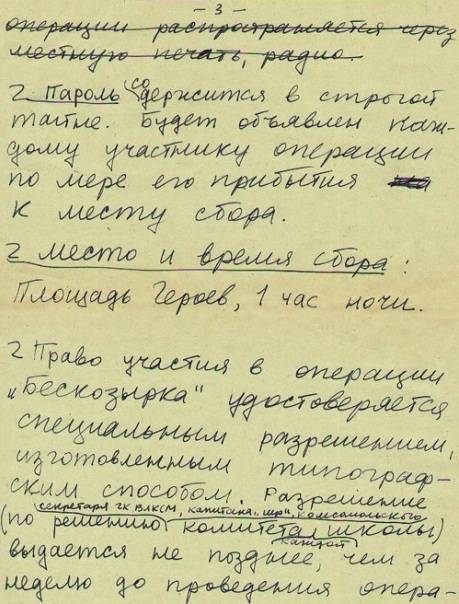 Problems began later. When in the city party committee, after hearing the report of the city Komsomol, they learned that Podyma and their "shkhunatik" decided to carry out a "Peakless Cap", and even separately from the high authorities, they were first outraged. Podyma, the captain of the Schooner, enjoyed the reputation of an independent comrade from his superiors.

An even greater wave rose when the gorkom learned that the guys were going to go at night, and with torches. The last point caused a nervous tic in responsible comrades. In December, 1965, the genius documentary “Ordinary Fascism” by Mikhail Romm appeared on the USSR screens. Therefore, at the words, a procession and a torch in my memory frightened pictures of mobs of wild beasts that were once people came up. Naturally, by inertia, and at the same time being reinsured, the authorities decided, at a minimum, to convince the persistent Schooner club.

However, the opposition of the city party committee was overcome. First, the Komsomol, represented by Viktor Saloshenko, Nikolai Khvorostyansky and other comrades, gave the go-ahead. And, secondly, in the city committee it was reasonably reasoned that since the “Schooner of the same age” was “moored” to the newspaper “Novorossiysk Worker”, then let the local comrades respond. After all, the refusal of the city party authorities was also motivated by the fact that no one wanted to take responsibility for the night march of schoolchildren with improvised torches (no matter what they inadvertently burned) and even in the border area of ​​the State Security Committee responsibility. In those years, the Black Sea coast, especially at night, was strictly guarded by border guards belonging to the KGB structure.

By the way, it was one of the first who learned about the upcoming “Operation“ Peakless Cap ”in the Committee. Otherwise, the guys are not able to impose a cap on the wave could not, but even just go to the coastal strip. It was the searchlight beam of border guards warned in advance that illuminated the place where the peakless cap was laid. The frontiers were waiting for the guys that night.

The next day, the news that, without indicating from above, simple Novorossiysk schoolchildren made their memory march to the landing site of the city legend and sent a cap on the waves at night in the reflections of torches, spread all over the city. People felt something native in it, something in its own way Novorossiysk, and most importantly without the principle of "sit and wait, while the leaders come up with it."

Despite this fact, the authorities were in no hurry to support such independence. Moreover, in 1969, suddenly the city committee of the party and the Komsomol, without any explanation, banned the Peakless Cap in the existing format. And here that very independence of the “shkhunatik” and their captain was manifested. They decided - no, no. And they passed from the “Eternal Flame” along a different route - towards South Ozereyka, to the landing area of ​​the main landing, whose fate turned out to be tragic. They called this event "Landing 69". Gone without asking anyone, so the tradition, one might say, was not interrupted.

In the 1970 year, "Peakless" was allowed. Yes, and it was impossible to refuse. Indeed, together with Elena Ostapenko, Nikolay Aleshichev decided to take part in the march. Sergeant-Major Aleshichev was not just a landlord, but a member of the Kunikov detachment, one of the first to jump onto the burning coast. Nikolai Ivanovich is a holder of the Order of the Patriotic War and the Red Banner, not counting numerous medals. 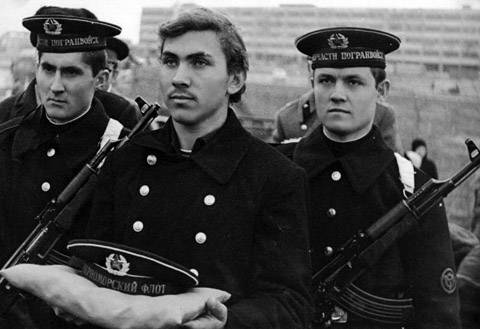 And in 1971, the authorities realized that a group of young patriots had created something that could not even be ignored. However, support from the city party committee and the Komsomol was weighty. In February, 1971 of the year, thanks to access to the media, Komsomol cells, and so on, everyone knew about Operation Peakless Cap. And they knew not just from conversations, habitually overgrown with mythical details and inaccuracies. Novorossiysk knew the day and time, as well as the place of gathering. In February, thousands of people flowed through the streets of 71.

Thus began the tradition, which next year marks 50 years. But how it has changed and what has become, as they say, completely different история.