US Holds Military Exercises Against Its NATO Ally 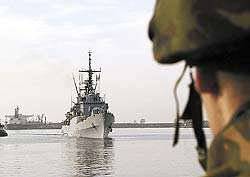 Newspaper "New News" The naval and air forces of Israel, Greece, with the participation of 6 fleet The US Navy conducts large-scale exercises in the Mediterranean, code-named NobleDina. Moreover, the "conditional adversary" against which joint actions are being worked out is named explicitly and unambiguously in the scenario of exercises - this is Turkey, a country that is part of NATO. During maneuvers, the fleet and aviation perform the task of protecting gas fields in the Mediterranean from attack from submarines. All this simulates a possible confrontation in the zone of conflict related to the development of a gas-bearing layer off the coast of Cyprus, claims for which were announced by the Turks.

The active area of ​​the exercise is the southern tip of Cyprus and the Israeli territorial waters abeam the port of Haifa. In addition, the shelf of the island of Crete, disputed by Ankara, and the uninhabited islands of Imia and Kardag, located in 10 km from the border with Turkey, were in the maneuver zone. According to the scenario of exercises on gas fields on the Cyprus shelf - drilling platforms and gas pipelines that divert gas to storage tanks - Turkish submarines, fighters or unmanned aircraft attack. The reflection of the attack is taken by the Greek destroyer and submarine, combat aircraft and helicopters. The Israeli Air Force is practicing tactics to protect offshore and ground infrastructure from missile and torpedo attacks from submarines, as well as air battles with enemy aircraft.

The teachings of NobleDina became a kind of replacement for the similar ReliantMermaid maneuvers, which, before 2009, were conducted by the armies of Israel and Turkey with the participation of the United States. The strategic Israeli-Turkish partnership was broken largely due to the position of Ankara. For the first time, Israel and Greece held joint exercises a year ago. But now their scale and time frames have been expanded. According to the Greek website Defencenet.gr, part of the training tasks are performed in close proximity to the Turkish coast. Teaching is not without reason called NobleDina. Apparently, this is a transparent hint at NobleEnergy - an American oil and gas company operating on the coastal shelves of Israel and Cyprus, including in the area of ​​the disputed field. The headquarters of NobleEnergy is in Houston. The company operates in the USA, China, Ecuador, Israel, in the North Sea and in West Africa.

It should be noted that in the three years that have passed since Turkey initiated a policy of breaking up relations, Israel has established active cooperation with Greece, Cyprus and the countries of the Balkan Peninsula, including in the area of ​​security. Among other things, Israel signed an agreement with Cyprus to ensure the safety of gas fields in the exclusive economic waters of the two countries, as well as a number of agreements on cooperation in this field with Greece.

According to Yuliya Kudryashova, senior researcher at the Center for Euro-Atlantic Security at the Institute of International Studies at MGIMO, the exercise will not lead to a sharp aggravation of relations between the Turks and their NATO allies. She notes that in Syria, the interests of the United States and Turkey coincide: both countries support the local opposition. Ankara will not conflict with Israel, although the deterioration of Turkish-Israeli relations is largely due to the dispute over deposits in the Cyprus region. “Turkey is now quite active in the Syrian direction. She does not need an aggravation on the “second front”, ”said the expert of“ NO ”. However, the absence of an immediate negative reaction from Ankara does not mean that the exercises will not have long-term consequences for relations between Turkey and NATO.
Military Reviewin Yandex News
Military Reviewin Yandex Zen
64 comments
Ad