ISIS and Israel - partners and brothers? 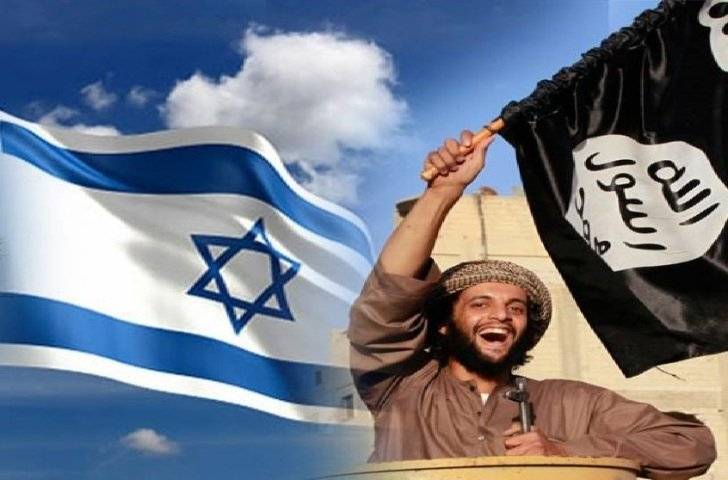 On the night of December 5., The Israeli army launched at least seven missiles at the Syrian military positions in Jamray in the western part of Damascus.

The forces of the Syrian air defense from the Mezza airbase were able to shoot down three Israeli missiles, according to Syrian state television.

It remains to wait for the confirmation or denial of this statement by the Israeli side. But regardless of this, I would like to say a few words on the topic.

In a strange way, for all three years of active hostilities, the militants of ISIL and other structures of the Salafi International never attacked either Israel or Israelis. Moreover, one of the ISIS groups, the Yarmuk Martyrs Brigade, which occupied the Syrian part of the Golan Heights, is located on the very border of Israel with Syria and Jordan, and now occupies the flag of ISIL on the very border of Israel. But, in a strange way, they have not fired a single shot in the direction of Israel for all the years - almost idyllic calm prevails there.

Why, then, are ultra-Islamist militants who proclaim as enemies anyone who somehow does not fit the canons of Salafi dogmas, who have declared Shiite Muslims and representatives of other Islamic movements, not to mention all Christians in general, to be their deadly enemies, who has been leading continuous wars against the Islamic states of the Middle East for almost seventy years now?

It is just as vague and inexplicable as the attitude of official Tel Aviv towards Islamic extremists. Usually implacable to any terrorist threats and even using “preventive strikes” to prevent them, Israel today almost favorably watches the actions of entire armies of Islamic militants near its borders, evading any participation in international operations against ISIL and other radical groups.

Moreover, in the reports of UN observers located in this region, there is regular evidence that the Israeli armed forces, since May 2013, have been in regular contact with ISIL field commanders. Caught by the hand, the Israelis initially explained such contacts with Islamists as the need to provide medical and other humanitarian assistance to civilians in border villages, but UN observers denied this version, since they obtained direct evidence of cooperation between the IDF and ISIL fighters. Deliveries of ISIL with unidentified cargo, as well as regular military medical assistance to terrorist units, were recorded for ISIL militants from Israel under the control of the IDF.

There is increasing information about the large-scale covert Israeli support for the so-called “Islamic State” project. And it seems that the Israeli elite has firmly established itself in the position “the enemy of my enemy is my friend”, contrary to what she declared on various levels: from official to “expert” —support of the actions of the antiterrorist coalition in general and directly of Russia in particular. ISIS support today allows Israel to solve the problem of neutralizing the influence of Iran and Syria - its last irreconcilable opponents in the Middle East. Saddam Hussein’s previous sweeping experience in Iraq and Muammar Gaddafi in Libya, which resulted in both of these countries that previously held anti-Israel positions, ceased to exist and turned into territories of chaos, recognized as successful. The same scenario is now actively supported and implemented by Israel in Syria. The destruction of a single Syrian state, splitting it into several segments at war with each other will allow Israel to not only get rid of the Assad government in Damascus and squeeze Iranians out of Syria, but also cut off Iran’s main “headache” - the Shiite regions of Lebanon to finally clean them up from Hezbollah.

Why is Israel not afraid of LIH? Not for the very reason why ISIS and terrorist organizations close to it do not threaten either Saudi Arabia or Qatar - those states that actually created, raised, financed, armed and directed this bloody monster to the Arab and the entire Islamic world?

It is no secret that for the last thirty years, the Israeli secret services have been closely cooperating with the Saudis, coordinating their actions with them.

It is no secret that the financial structures of Israel are firmly affiliated with Saudi and Qatari financial centers, and the political leadership of Israel, Qatar and Saudi has long been talking to each other exclusively in friendly tone and constantly talks about strategic partnership.

It is not a secret that all these countries have a single patron and “patron” - the United States, who also stood at the origins of the creation of ISIS.

The conclusion is that Israel today is not an isolated detached observer of events taking place in the “Greater Middle East”, but a shadow puppeteer, to whom Islamic radical groupings are running, tightly “linked” with other “customers” and sponsors of “Salafi International” : United States, Saudi Arabia and Qatar.

It is clear that with the outbreak of civil war in Syria, the “golden time” came for the Israeli special services - they opened a large-scale hunt on the territory of this country for their enemies from Hezbollah and the Iranian special services, with which Israel has long-standing accounts. Moreover, Israel generally ceased to reckon with international law in any way. His aviation regularly inflicts airstrikes on the territory of Syria, invading its airspace for tens of kilometers. His agents are active in Syrian territory and conducts special operations here.

In May of this year, 55-year-old Amin Badreddin, the head of Hezbollah’s counterintelligence and the second face of the group after its leader Hassan Nasrallah, were killed during a point strike by Israeli aviation. And this is far from the first case when Israeli secret services are credited with a particular blow to the top of the Shiite Hezbollah group. In February, 2008 was eliminated in Damascus Imad Mugniy - one of the founders and leaders of the movement. Then the Hezbollah leadership also accused Israel of killing its leader.

Another liquidation, which also traced the Israeli trail, was held on January 18 on the Golan Heights 2015 on January 25. As a result of an air strike on Syrian territory, XNUMX-year-old Jihad Mugnii, the eldest son of Imad Mugnii, was killed. The year before, he was appointed commander of the Hezbollah forces in the Syrian part of the Golan Heights. Along with him, several high-ranking Iranian officers were killed, including General Muhamad Allahdadi.

And in May, 2015, under unclear circumstances, was killed by Marouane Mugnii - one of the field commanders of Hezbollah, a cousin of Imad Mugnii. It was reported that this was also the Israeli special operation.

So, it is more than obvious that Israel fully uses the civil war in Syria to fight with its opponents on the territory of sovereign Syria ...

Ctrl Enter
Noticed oshЫbku Highlight text and press. Ctrl + Enter
We are
Israel’s alleged neutrality in the Syrian conflictKurdish question in modern Syria
47 comments
Information
Dear reader, to leave comments on the publication, you must to register.