"Sawed-Off" rifle instead of a pistol - Fightlite Raider

December 18 2017
55
The shortened version of the gun, the people “edge”, no one is surprised, they are made now even in the factory of known models weapons. Even our compatriots had the opportunity to legitimately look at the likeness of weapons in such a format with an example, sorry for the French traumatic gun “Howd”. 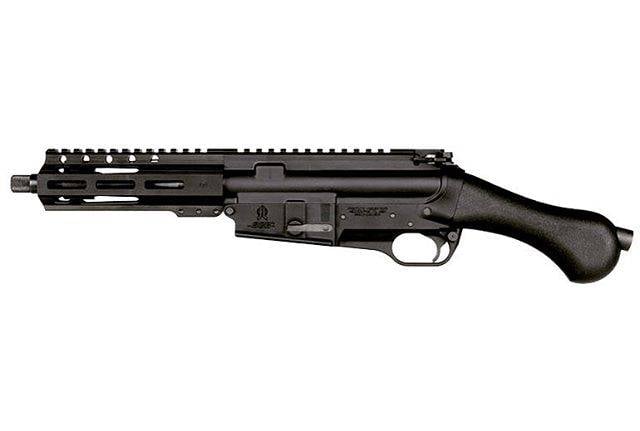 With all the obvious disadvantages of reducing the barrel length of a gun and depriving it of the butt, one plus remains - high fire power at short distances, embedded in one or two shots, and with small dimensions it is much easier to maneuver with such a weapon in cramped conditions than with a full-sized gun. It is also worth taking into account the possibility of using bullet cartridges, which significantly increase the effectiveness of the use of “cut-offs” when firing at the enemy in a bulletproof vest due to the extreme effect. In general, such modernization in some cases fully justifies itself, it proves at least the fact that in many countries in service with law enforcement agencies there are shortened guns. The truth is that it is necessary to note such a moment that these rifles are most often equipped with rubber bullet cartridges or are used as a means of delivering irritating substances to the crowd, but this is somewhat different. история.

In general, the “edge” of a gun known for a very long time, probably since those times as soon as the gun appeared, but the edge of a rifle can be found not often, or rather, it can not be found at all, since the expediency of such shortening is very doubtful. So it was until recently. 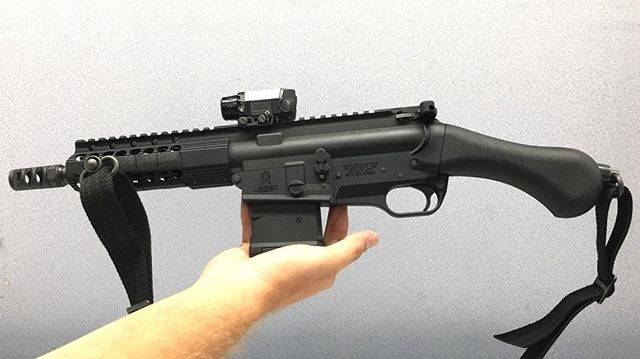 In November, Fightlite demonstrated a complete version of its weapon, which is exactly what a rifle cut is. This weapon is positioned as an intermediate between a pistol and a carbine, does not have a butt, but it has a very short barrel with a muzzle brake. This unit is certified in the USA as a pistol, despite the fact that it is powered by 5,56x45 or .300 BLK cartridges, depending on the version of the weapon. Let's try to get to know the design of this device more closely and try very hard to find a niche for it.

It is difficult to say exactly what kind of weapon became the basis for the new pistol. At first glance, it looks like the similarity with something AR-like, but the absence of a tube for the buffer spring suggests that the automatic circuit used in the weapon is different from the M16. In fact, this tube is present, it is located at an angle in the handle of the weapon, the interaction with the bolt group is due to the long curved thrust. Automation is built on the removal of powder gases from the barrel with the direct influence of powder gases on the bolt carrier. In general, in principle, nothing new in this weapon in terms of design, we will not see, probably the receiver was developed specifically for this gun.

The weapon has lost the fire mode switch and the fuse instead is now using a button with the ability to move perpendicular to the weapon. A similar implementation of the inclusion of the fuse can often be found in smooth-bore guns.

There are no open sights on this device, but they can be installed on a long landing bar at the top of what is left of the shank and the receiver. There are also additional places for the installation of three more strips for attaching additional devices.

The muzzle of the weapon has a thread on which the muzzle brake-recoil compensator is screwed, instead of it, you can install a silent shooting device or leave the muzzle without any additions.

Characteristics of the gun Raider 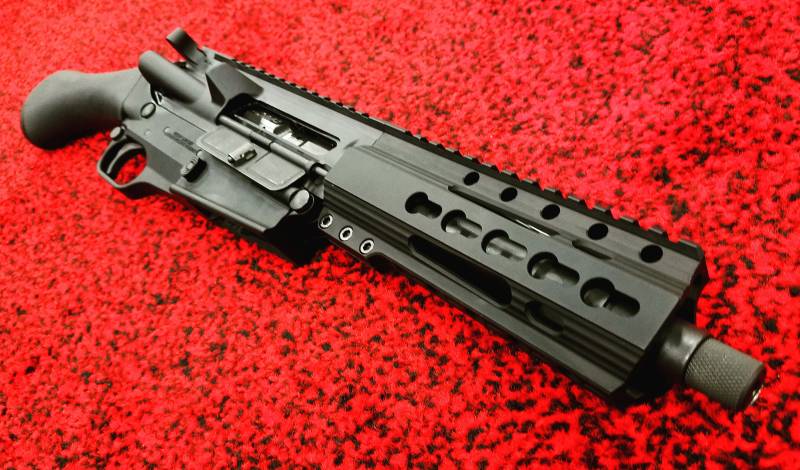 The whole construction of the 1,76 kilogram weighs, and you need to take into account the balance of weapons, which in principle is not. It feeds a pistol from detachable stores with 10x5,56 or .45 BLK cartridges in 300, in order not to go into details about the .300 BLK cartridge, it can be compared with our domestic 7,62X39 with a subsonic bullet, although the comparison is not entirely correct, but it gives an overview of ammunition and the capabilities of the weapon using it. The length of the gun barrel is 185 millimeters without considering the muzzle brake, but the total length of the weapon is 510 millimeters.

What was the Raider pistol for?

This is probably the main question that arises in the head of a person who first saw this weapon. Yes, the weapon turned out to be very charismatic, if you point it at a person, then he will surely feel uncomfortable, but there is one “but”. This, however, is that you can shoot from this gun, but you cannot hit it. The only exceptions are shooting at very short distances or using a laser pointer. 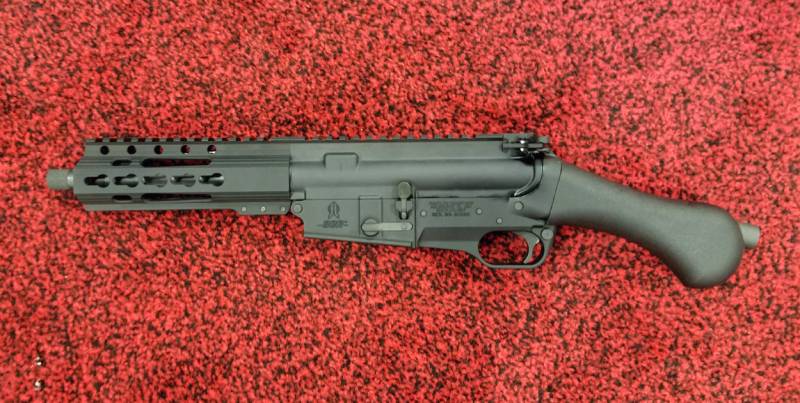 The design of the hold handle itself makes it possible to shoot something fantastic, of course, the weapon can be held with both hands like a regular rifle or machine gun, but the lack of a butt will affect the distance even a couple of tens of meters.

Despite the similar ergonomics, that “edge” will not have a similar disadvantage, since short gun barrels provide a sufficiently large fraction of the shot at a short distance, so that a shot “from the hip” or offhand will almost always give results. In the case of the Raider pistol, this will not be observed, since there is only one bullet.

In principle, even with such a short barrel, it is possible to conduct confident and effective fire at distances up to 200 meters, but the design of the weapon does not allow this to be done. The absence of at least a wire shoulder rest makes the weapon ineffective at both short and medium distances. A kind of yes, very brutal.

On foreign Internet resources, the new gun is called ideal for permanent placement in a car for the purpose of self-defense. I would not count on such a means of self-defense, or rather on its combat effectiveness, except that a psychological effect can take place. 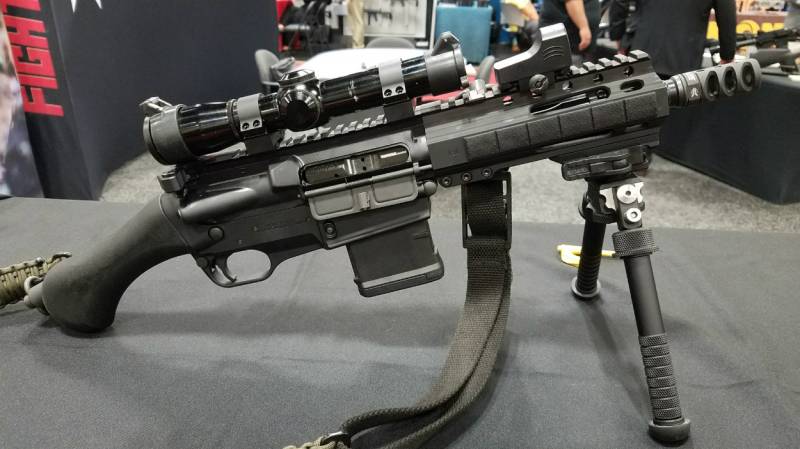 Quite a few people called him the perfect means of protection against zombies. Well, if people believe in zombies, then let them believe in the effectiveness of these weapons, although I would, of course, prefer the same “edge”. 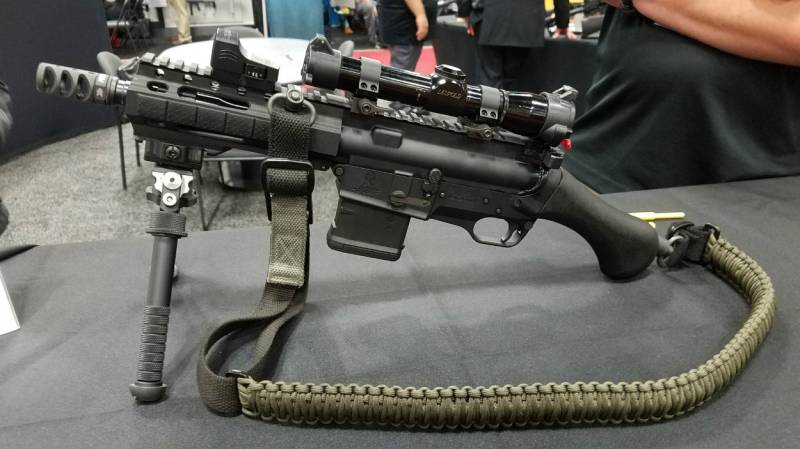 As mentioned above, the only thing that can make this weapon effective is the presence of a laser target designator and a strong grip on the shooter. Then it will really be possible to get somewhere from this gun, but this is not a panacea.

In general, we can say that in this case, the creation of a new class of weapons was unsuccessful. However, judging by the fairly extensive topics in foreign forums with the discussion of this weapon and enthusiastic reports of individual people, this weapon will have its own buyer, so that this gun can be a success. Pleases just soberly evaluating this weapon people still more. 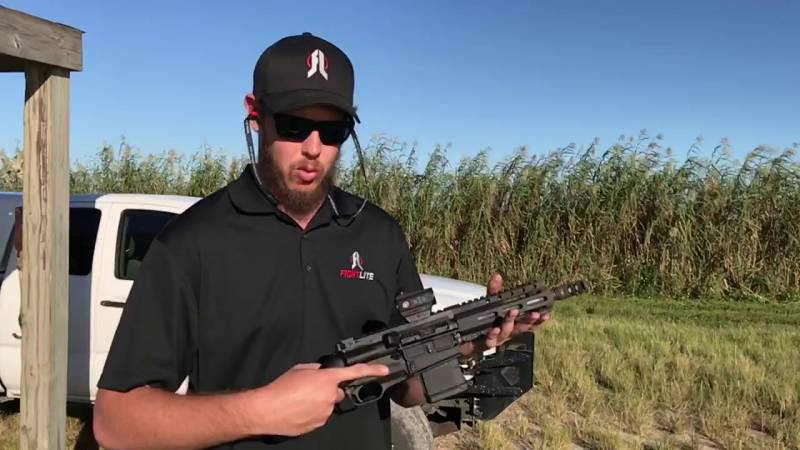 In general, this weapon has a really interesting appearance and, although it is poorly suited for real use, we may be able to see it on the screens in a film with a post-apocalyptic theme, where it belongs. The only bad thing is that after the shootings there will only be more people willing to buy it.

Ctrl Enter
Noticed oshЫbku Highlight text and press. Ctrl + Enter
We are
Incompatible with lifeWhat should be a modern sniper (part of 1)
Military Reviewin Yandex News
Military Reviewin Google News
55 comments
Information
Dear reader, to leave comments on the publication, you must sign in.